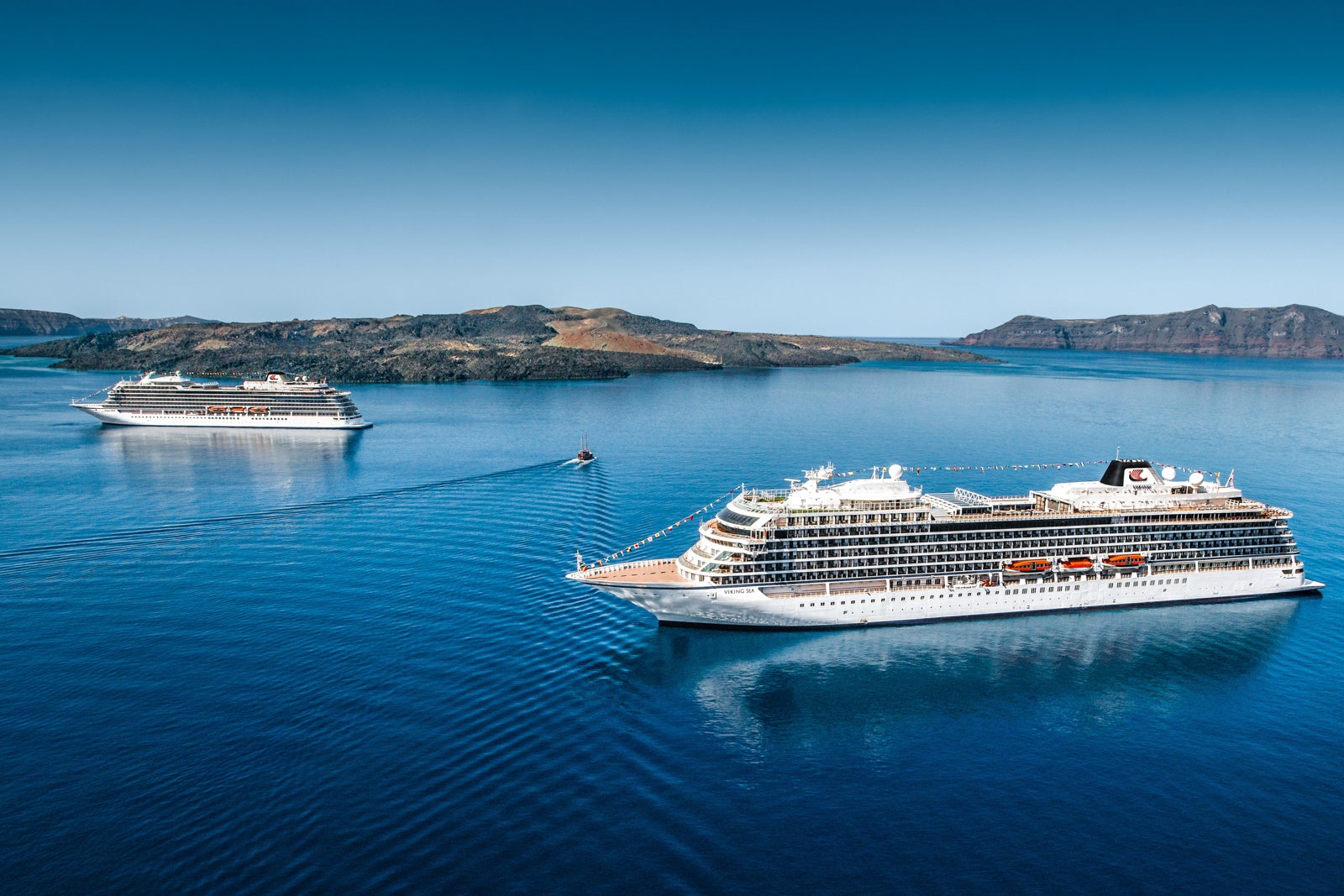 Fast-growing Viking has one of the most diverse arrays of itineraries of any cruise line.

Not only does the California-based company offer ocean cruises in almost every corner of the world, it also offers river cruises on many of the world's major rivers.

That's notably different than most cruise lines. Typically, cruise lines operate either ocean cruises or river cruises but not both, giving them a smaller range of itineraries.

Viking has a particularly large footprint when it comes to European river itineraries, with a wide range of sailings on nearly every European river of any note, from the Douro in Portugal to (until recently, at least) the Volga River in Russia.

Viking operates 80 river ships in all -- an astounding number. None of its main competitors among river lines catering to North Americans, which include Avalon Waterways and AmaWaterways, have anywhere near that number of vessels.

Among ocean cruise destinations, Viking has a major presence in Scandinavia and Northern Europe, which it considers its home turf. (The company was founded by a Norwegian family.) But you'll find Viking's six ocean ships everywhere from North America to Asia and Australia.

Just this year, the line began its first cruises to Antarctica with its first-ever expedition ship -- a type of vessel built specifically for travel to remote, hard-to-reach places.

Among the line’s voyages, you’ll find everything from eight-day cruises in the Mediterranean to 138-day around-the-world voyages.

Overwhelmed with choice? Here are the five best Viking cruise destinations where the cruise line can truly offer you a memorable vacation.

Some of Viking’s most interesting itineraries are around Scandinavia and the Baltic Sea, with many beginning or ending in Norway -- the homeland of the company's founder, Torstein Hagen.

As Hagen once put it to me, Scandinavia and the Baltic Sea are what the company considers "Viking country" -- a region where they want to dominate.

During summers, in particular, Viking devotes an unusually large number of its ships to itineraries around Scandinavia, the Baltic Sea and other Northern Europe destinations such as Iceland. Many, notably, use the relatively small but famously scenic Norwegian city of Bergen (pop. 286,000) as a gateway, something no other line is doing. That allows for unusual variations on the typical Baltic Sea or Norwegian fjords cruise.

The line's most popular route in the region, "Viking Homelands," is a two-week-long, one-way trip between Bergen and Stockholm, Sweden, that combines several days of exploring the fjord region of Norway's west coast with more-typical Baltic cruise destinations such as St. Petersburg, Russia, and Helsinki, Finland.

Note that, in the wake of Russia's invasion of Ukraine, Viking has pulled the St. Petersburg stop as well as stops in Finland and Estonia from the Viking Homelands itinerary for 2022; the trips instead will feature extra stops in Norway and Denmark.

Viking also offers a 14-night itinerary that includes several stops in the northernmost part of the country above the Arctic Circle. Dubbed "Into the Midnight Sun," the one-way route between Bergen and London is unique because it combines calls in far-north Honnigsvag and Tromso, Norway, with visits to Scotland's remote Shetland Islands and Orkney Islands. Though part of the U.K., these archipelagos have ties to Norwegian and Viking history.

Itineraries that will take you from Bergen to Iceland or even as far away as France, Portugal and Spain also are available.

Among the longest sailings that Viking offers that include calls in Northern Europe are one-way, 28-night voyages between Bergen and New York City. The trips include stops in Norway, Iceland, Greenland and Canada.

Viking has grown into a major player in Mediterranean sailings, with more than 30 distinct itineraries that include stops in the region.

Typical of the latter is the line's 14-night "Mediterranean Antiquities" routing, a one-way trip between Athens and Barcelona that stops in Greece, Turkey, Italy, Monaco, France and Spain.

More focused Mediterranean itineraries include the line's nine-night "Empires of the Mediterranean" voyages between Venice and Athens, which mostly focus on stops along the Eastern side of the Adriatic Sea in Slovenia, Croatia and Montenegro.

In the Mediterranean, the line’s main hubs are Barcelona; Civitavecchia (the port for Rome) and Venice, Italy; Piraeus (the port for Athens), Greece; and Istanbul, Turkey.

Viking is, quite simply, the giant of river cruising in Europe -- at least among lines that cater to English speakers. The company operates around 70 river ships on a broad swath of the continent's rivers -- far more than any other river line catering to North Americans.

In all, the line accounts for about half of all river cruises taken by North Americans in the region.

Among the rivers in Europe where Viking has a major presence are the Rhine, Main and Danube in Central Europe; the Seine, Rhône, Dordogne, Garonne and Gironde in France; the Douro in Portugal; the Moselle and Elbe in Germany and the Dnieper in Ukraine. Note that the line's Ukraine voyages have been canceled for 2022 due to the war in the country.

On nearly all of the rivers, the line offers multiple itineraries with lengths ranging from seven nights to as many as 22 nights.

Viking got its start in 1997 when founder Torstein Hagen bought four pre-owned Russian river ships and started up sailings in the country, and — in normal years, at least — the line is the major player in Russian river cruises aimed at North Americans.

In the wake of Russia's invasion of Ukraine, Viking has canceled all Russia river sailings in 2022 and 2023. Whether or not Russia river cruises restart in 2024 will depend on how the situation in Ukraine unfolds over the coming months.

Viking traditionally operates voyages on a single itinerary between Moscow and St. Petersburg that involves travel on the the Volga, Neva and Svir rivers.

The 13-day trips focus heavily on the two gateway cities, with four days allotted for touring Moscow and four days reserved for visiting St. Petersburg. In between, Viking river ships visit the provincial capital of Uglich and the city of Yaroslavl. Additional stops include Kuzino, the site of a monastery dating to 1397, and Kizhi, the home of an open-air museum of architecture that is a UNESCO World Heritage Site.

Viking is a newcomer to cruises to Antarctica, but the destination is about to be a big growth area for the line. Viking is in the midst of adding two new, 378-passenger expedition cruise vessels specifically built to travel to the White Continent.

Dubbed Viking Octantis, the first of these vessels began sailings to Antarctica in February 2022 and already is making waves in the market for Antarctica cruises, in part because it has several new and unusual features.

Most notable is The Hangar, an enclosed marina that allows passengers to transfer to the ship’s Zodiac landing craft while still in the protected interior of the ship. A first for an expedition ship, it’s something that could significantly improve the experience for passengers heading out on Antarctica landings.

In another first for polar expedition cruise vessels, every cabin on Viking Octantis has floor-to-ceiling glass walls that slide partially open from the top to create a balcony-like feel.

Viking offers several Antarctic itineraries, with the typical trip starting with a night at a hotel in Buenos Aires, Argentina, before a flight to Ushuaia, Argentina, to board one of the two expedition ships for an 11-night cruise to Antarctica and back. A longer version of the trip features 13 nights on board one of the ships and extra days in Antarctica.

Viking also offers Antarctica sailings that combine a visit to the White Continent with stops in the Falkland Islands, Uruguay and Brazil.

Related stories
After 19 months, United Airlines is officially suspending flights at New York's JFK airport — again
17 ways to earn lots of Marriott Bonvoy points
Delta SkyMiles Gold Amex card review: Perfect for casual Delta travelers, now with a 65,000-mile offer
Fast-growing Viking doubles down on adventure cruising with a second expedition cruise ship
Featured image by Alastair Miller
Editorial disclaimer: Opinions expressed here are the author’s alone, not those of any bank, credit card issuer, airline or hotel chain, and have not been reviewed, approved or otherwise endorsed by any of these entities.