From Alaska to the Panama Canal: Here are 9 of TPG’s favorite fall cruise itineraries

Articles
Fran Golden is an award-winning cruise journalist whose work regularly appears in Bloomberg, Travel + Leisure, Afar and other travel outlets. She is the author of several cruise and travel books, including “100 Things To Do In Alaska Before You Die." Fran lives in Cleveland, Ohio. Although fond of lake Erie, her first love is the sea.
Sept. 02, 2022
•
8 min read 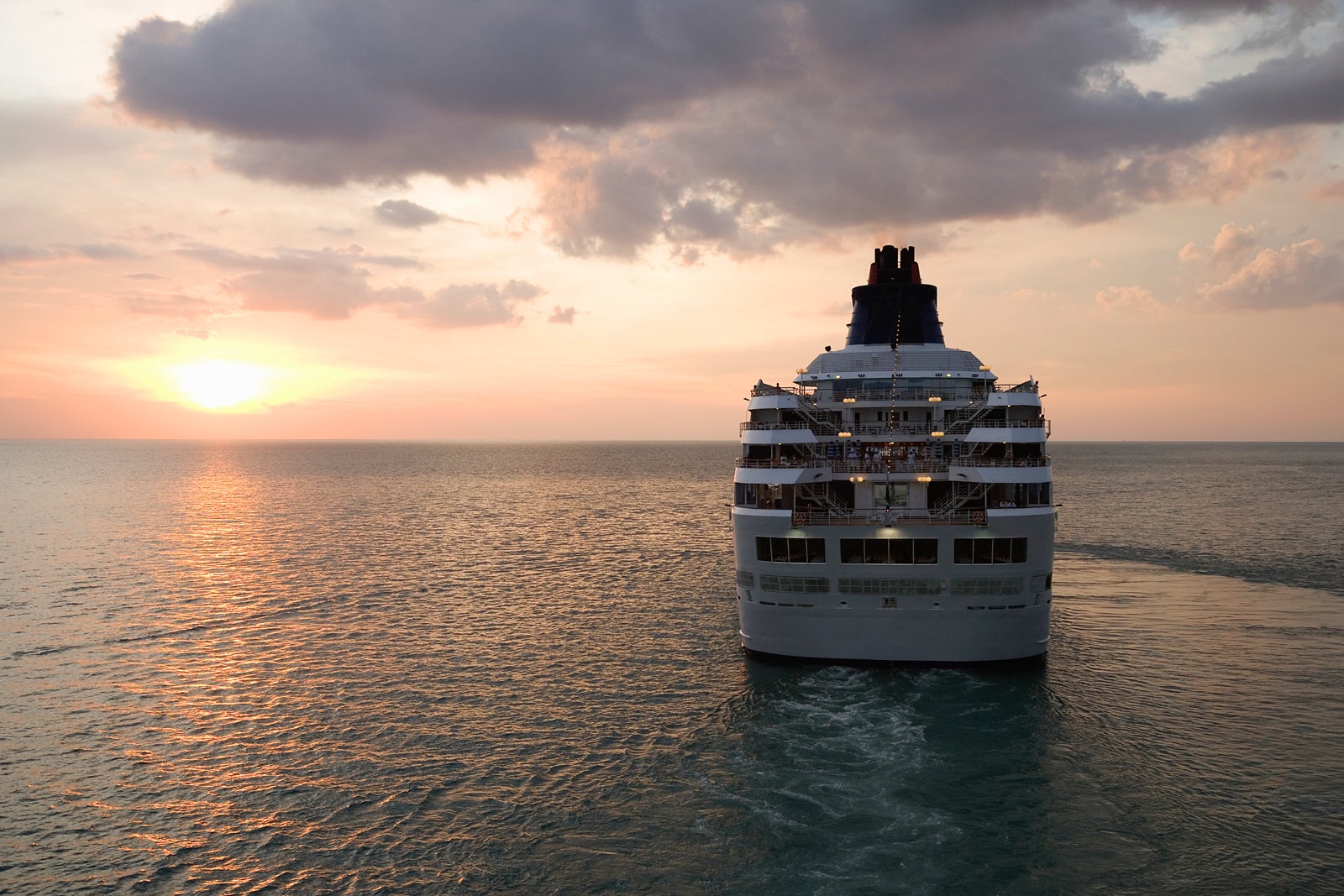 When it comes to fall cruises, the Canada/New England region snags most of the glory. Seasoned cruisers know the joys of sailing up the New England Coast to Canada, including the beauty of seeing leaves changing colors, the satisfaction of pigging out on lobster and the thrill of spotting whales.

But plenty of other deserving destinations are perfect for autumn cruising. From the Greek Islands with their ancient sites and crazy-beautiful views of the sparkling Aegean to Bermuda with its pink-sand beaches and summerlike temperatures, options abound.

Alaska sailings, which restarted in 2021 after a nearly two-year hiatus due to the COVID-19 pandemic, have also been extended into October in an effort to make up for lost time. That means, in addition to seeing glaciers thunderously shed house-sized chunks of ice into the sea, you might have a chance to spot the northern lights.

One thing cruisers can cheer about this fall: bargain fares. With cruise lines struggling to fill ships, prices remain low for the second year in a row, making a cruise a better value than other types of travel in 2022.

Here are our top picks for fall cruising.

The Alaska cruise season typically ends in September, with most ships heading south by mid-month. But, as was the case in 2021, lines this year are trying to make up for lost time by sailing into mid-October.

The sailings will show Alaska from a perspective that cruise guests don’t typically see. Ports such as Juneau and Ketchikan will have fewer visitors, with more locals getting back to their regular lives post-tourist season. The air will be brisk (expect temperatures in the 40s and 50s), with short days.

If you’re lucky, the northern lights will be visible in the evening sky. Wildlife will be preparing for winter: bears filling up on silver salmon, moose looking for berries, bald eagles flying overhead. You might spot humpback and gray whales. Fishermen will still find rainbow trout and Dolly Varden — along with salmon. Fog or clouds near blue glaciers will make for exciting photos, with the ice really popping.

Plus, the fall cruises have some enticing bargain fares.

Bermuda is a popular summer destination. This year, the season will run through mid-December for some lines. That has its advantages.

Temperatures on the island typically remain in the low 80s in October and are in the pleasant 70s in November, so you can still hit the famous pink sand beaches and comfortably pursue such activities as hiking the historic Railway Trail past cottages, farms and gardens.

Cruisers can partake in fall traditions that include golf, tennis and food festivals. Bonus: The Bermuda Spiny Lobster (also known as rock lobster) season begins in September with the treat appearing on menus around the island.

As cruise lines move their ships out of Alaska after the summer season, some linger in California, affording an opportunity to view the coast from the sea and, in the case of sailings that spend time in San Francisco, to do a shore excursion to Sonoma wine country or Napa Valley in the height of the grape harvest.

For sailings that depart from ports near Los Angeles, you might consider arriving a day early and taking in some of the city's sights.

Fall cruises in the Caribbean include fewer children, except at Thanksgiving; reduced fares, due to lower demand; and cooler temperatures that are still warm enough to draw travelers to the beach.

Hurricane season runs through November, so you are taking a chance that your itinerary may change, but the good news is that cruise ships can reroute to avoid storms.

With Florida's designation as the cruise capital of the world, and given its proximity to the Caribbean, travelers have a large selection of ships to choose from if they depart from the Sunshine State. Since the Caribbean is a year-round destination, there's ample opportunity, but autumn does afford nicer weather and, often, less expensive fares.

Cruises on rivers like the Danube and Rhine are back in full swing, with all of the major river lines sailing again and offering itineraries throughout the fall.

One big advantage of a fall river cruise in Europe is the opportunity to visit vineyards brimming with grapes. If you’re sailing the Danube between Germany and Budapest, take advantage of the cool weather and hike, bike or otherwise visit Austria’s wine-growing Wachau Valley in late September or October.

If you’re on the Rhine, have your camera ready to catch shots of breathtaking castles surrounding the Rhine Gorge. When you're docked, wander the historic cobblestone streets of Petite France in Strasbourg, stop for a cup of Rudesheimer coffee in Rudesheim or pick up a bottle of Cologne's signature fragrance.

If you talk to a Greek, you will likely hear that fall is the best time to visit the islands. Summer temperatures reach well into the 90s, but come September they begin to cool. By October, they are in the very pleasant 70s. Plus you'll avoid the crowds, especially at such must-see sights like the Acropolis in Athens, the Palace of the Grand Master of the Knights of Rhodes, the expansive archeological site of Delos (off Mykonos) and the hilltop villages of Santorini.

By fall, you can have these places practically to yourself. Last year, Greece was the saving grace for summer cruises, allowing several cruise lines to call with passengers when most other Europe destinations remained closed to travelers.

The stunning fall colors of New England are startlingly beautiful from the sea. Since Canada has not only reopened to cruisers but also waived its arrival testing requirement, cruises are back in full — or nearly full — force this autumn.

But book ASAP, as we're expecting pent-up demand, which could make cruises to this destination a hot commodity. From mainstream to ultraluxury, small ships to large ones, plus expedition vessels, passengers have lots of options to explore the coast from New York or Boston up to eastern Canada.

The Columbia and Snake rivers are beautiful places to cruise in the spring and summer, but they are particularly mind-blowing in the fall. The basalt cliffs and waterfalls of the deep Columbia River Gorge are enhanced by the addition of big-leaf maples ablaze in red, Oregon ash in yellow and cottonwood in orange.

River ships, including paddlewheelers and other small vessels, follow the path of Lewis and Clark in Washington State and Oregon from September to mid-November on sailings ranging from five to 11 days. While you are in the neighborhood, sample the local wines on visits to Washington State wineries.

In the fall, cruise ships typically reposition from Alaska to the Caribbean through the century-old, manmade engineering wonder that is the Panama Canal. This fall, there are plenty of options, including sailings from several of the industry's most popular lines.

During your time in the Panama Canal, you’ll experience both jungle views and your ship's maneuvering through a series of tight locks, sometimes with mere inches to spare. Be sure to wake up before sunrise if you want to snag a prime spot on the outer decks.

Along the way, you can expect calls on ports in Panama, Costa Rica and Colombia, among others.