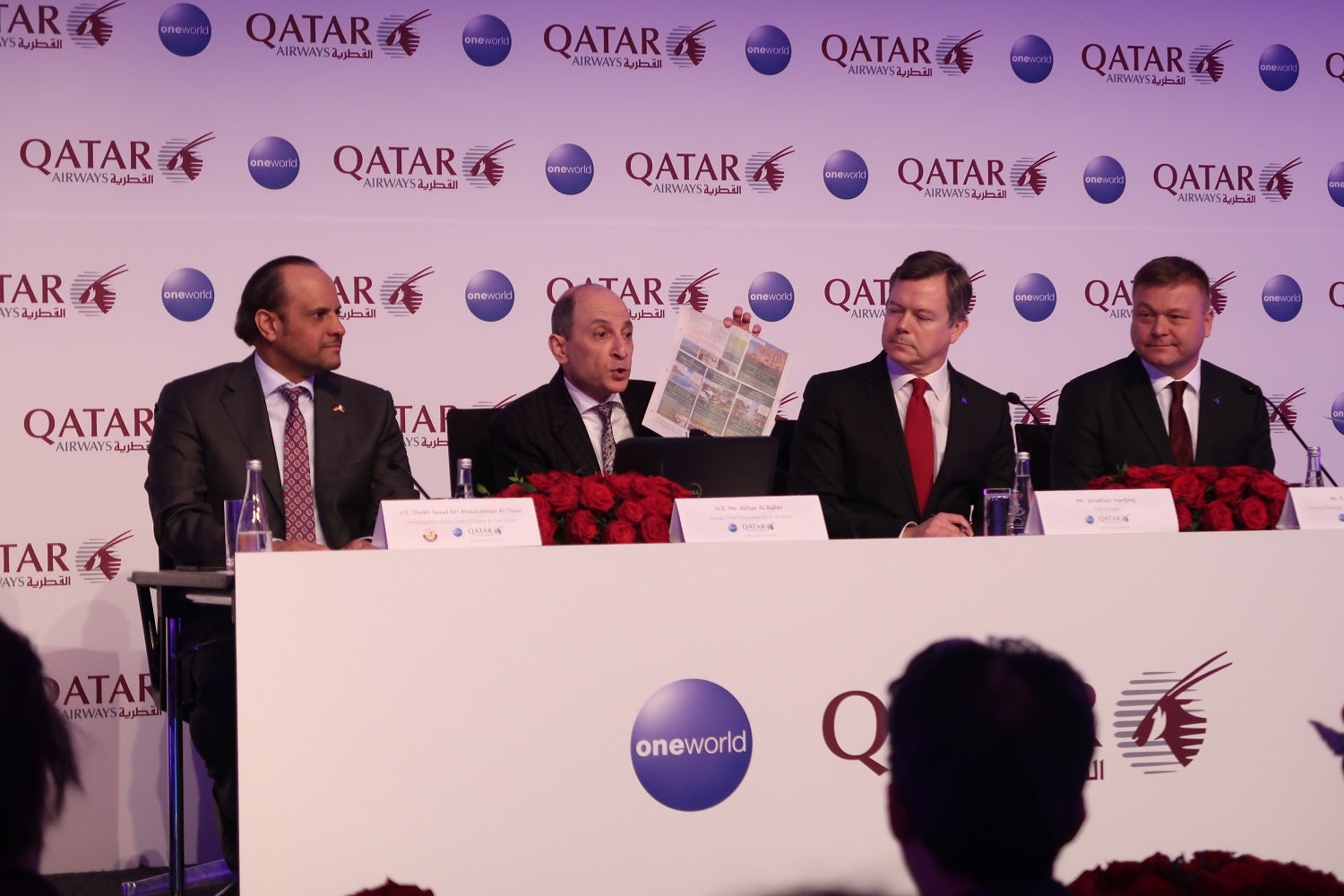 Qatar Takes Stage to Diss Emirates and Etihad, Gives Conflicting Reports About Blockade
This post contains references to products from one or more of our advertisers. We may receive compensation when you click on links to those products. Terms apply to the offers listed on this page. For an explanation of our Advertising Policy, visit this page.

Taking the stage to call itself the "world's fastest growing airline" (although it doesn't make the top 10) Qatar held an entertaining press conference Wednesday at ITB Berlin. While the news that the airline had to share this year was much less monumental than last year, that didn't keep Qatar CEO Akbar Al Baker from over-dramatizing the event.

After a fittingly dramatic unveiling of Qsuite last year, press were invited to an unveiling again this year. With media gathered around, Al Baker noted "our competitors are absent" just before pressing his hand down on a digital screen. Dramatic music built to the climax, a promotional video played and finally a countdown began. Then, the curtain fell to unveil... Qatar's improved trade show stand. Impressive, sure. But certainly not deserving of the dramatics.

At the press conference afterward, Qatar shared plenty of new routes, Qsuite plans and more. But, it was Al Baker's persistent comments about the ongoing blockade of Qatar that were the most memorable part of the event.

For those unaware of the situation, in June 2017, Saudi Arabia, Egypt, Bahrain and the United Arab Emirates suddenly shut down their borders with and closed air routes for the tiny peninsular country of Qatar. Since then, there's been a slight easing of the air restrictions, but Qatar is still highly dependent on flying in food and supplies. Qatar Airways quickly ordered and took delivery of a Boeing 747-8 freighter to assist with these needs.

In his ITB Berlin press conference opening remarks, Al Baker boasted how the blockade has "had a positive effect" on the airline:

Under these difficult times, how we continue to expand our airline, challenging all odds, when our adversaries thought that we would shrink... as a matter of fact, it had a positive effect.

Indeed, he went on to confirm: "In 2017, under the blockade, was one of our most successful years." However, later in the press conference, the outspoken CEO would paint a much different picture of the airline's results.

While never identifying them by name, Al Baker also took time to take potshots at Emirates and Etihad throughout the press conference. After announcing Qsuite would be flying to Germany, Al Baker explained all of the benefits of Qsuite before making an aside:

So, of course, you don't need to waste your money and fly on the Residence. This is now your Residence at an affordable price.

While Qsuite truly is "first in business class," it's no comparison to the three-room Etihad Residence — or even the spacious Etihad Apartment. But why let something like facts get in the way of a good dig? And that's disappointing, because Qatar has a legitimate claim of superiority over its competitors. Even a year old, Qsuite is still ahead of the just-unveiled 2-2-2 Emirates business class:

But, it was the first question of the press conference that prompted the longest rant on the blockade topic. Al Baker clocked a seven-minute response including:

Even after receiving applause, Al Baker wasn't done with his criticism. Pulling out a prepared prop, he pointed out that "the country that felt that we are going to capitulate. That we would be hurt. Actually they are being hurt. When you discount 50%, 35%, 40%... We are not discounting, we are expanding, this shows that it backfired on them and not us."

After all of this grandstanding, a very different picture of the effect of the blockade emerged. When asked about Qatar Airways' profits and the costs of the blockade, Al Baker explained that it is costing the airline quite a bit. The airline is spending more on fuel to fly the required longer routes. But also, Al Baker explained the airline is having to up-gauge aircraft on some routes. Instead of flying the narrow-body aircraft that were previously flying on some routes, Qatar is having to use wide-body aircraft — and the airline isn't able to fill the extra seats.

Then the hammer dropped:

Qatar Airways will announce a very large loss during the current financial year which will be ending at the end of this month. But, the airline is financially robust. Unfortunately, we do not have the luxury of Chapter 11 [bankruptcy]. So, we have to consider and find additional financial stream — investments — in order to continue our expansion, even under the loss. In the right time, we will claim for our losses against the blockading countries.

When an airline CEO references bankruptcy, things must not be going very well. This also might be meant as an obscured dig at the US airlines that are currently calling for Open Skies agreements to be renegotiated with regards to Middle Eastern carriers — each of which has been in Chapter 11 bankruptcy sometime since 2006.