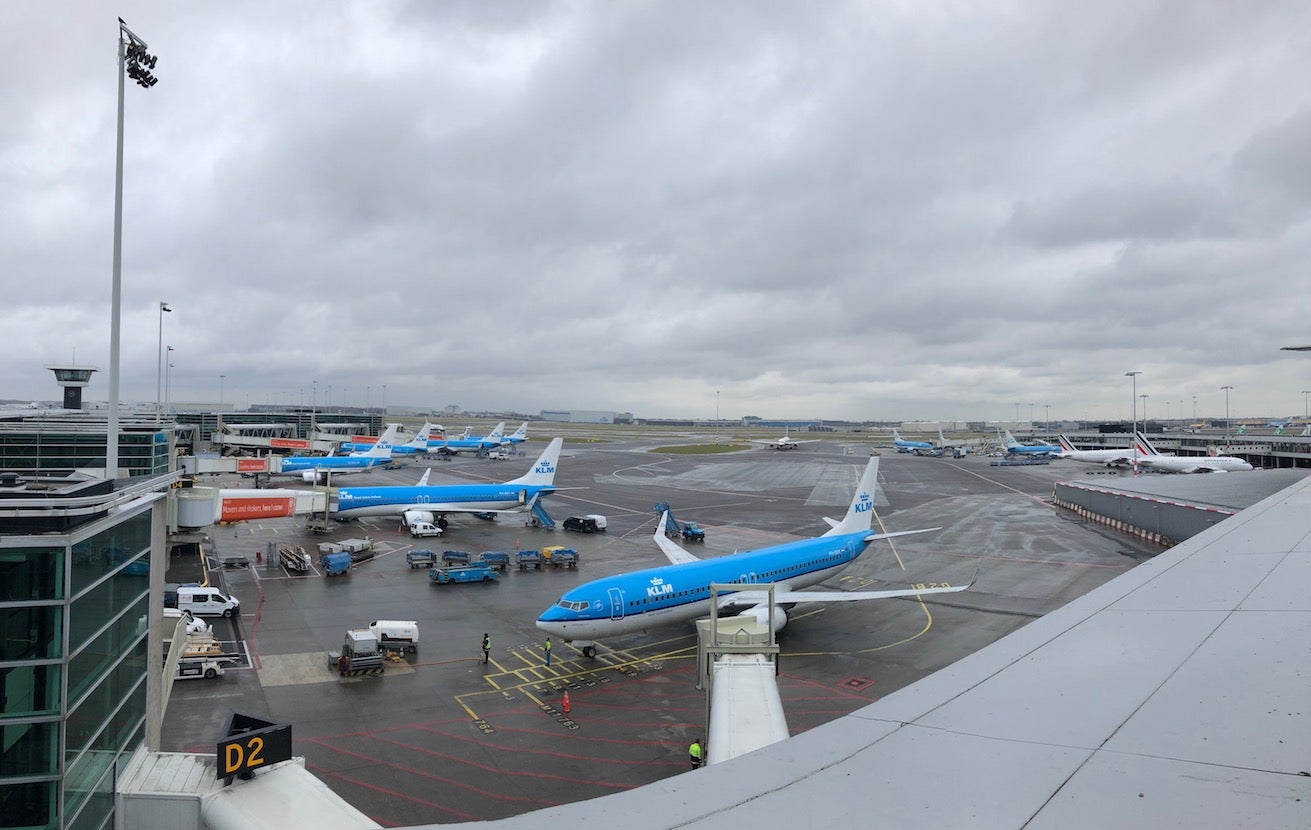 Plane Spotter Paradise: the Panorama Terrace at Amsterdam Schiphol (AMS)
This post contains references to products from one or more of our advertisers. We may receive compensation when you click on links to those products. Terms apply to the offers listed on this page. For an explanation of our Advertising Policy, visit this page.

There a lot of reasons to like Amsterdam's Schiphol airport. Yes, it's one of the largest and busiest airports in Europe and the home base of SkyTeam partner KLM, but it's much more than that. Schiphol is an AvGeek paradise. Not only does the place swarm with interesting airlines and aircraft — where else are you going to see an Airbus 340 flown by Surinam Airways, not to mention all those increasingly rare 747s in KLM's beautiful blue colors? — but the airport actively wants you to see them.

Unlike the majority of mega-airports around the world, AMS encourages "plane spotting" — that is, the time-honored tradition of watching planes with binoculars, a camera and a healthy dose of patience. The airport has several designated areas to watch planes take off, land and move around. It even provides a map and tips for enthusiasts on the airport's official website.

People come from all over for Schiphol's famous views. In the warmer months, many set up for the whole day on the grass by the side of a runway. AMS doesn't believe in barriers, and you can photograph the planes take off and land with no obstruction. And if you're on a connecting flight through here, you can head to the viewing terrace for a quick but exhilarating dose of airplane watching from really close. (Practice ahead how to say Schiphol with the proper Dutch pronunciation.)

The easiest spot to get to, and perhaps the least intimidating for less-hardcore nerds, is the Panorama Terrace. The Terrace is a large observation deck, located on the landside portion of the airport (before security — or after you clear customs if you're arriving at AMS), between concourses D and E with, yep, you guessed it — panoramic views of the gate area, a few of the runways and the Dutch landscape beyond the airport.

If you need further directions to find it, everyone I talked to in the airport was incredibly friendly. For the best experience, try going during the morning as that's when the larger planes from overseas arrive. Be sure to note the terrace's changing hours according to season.

Once you get there, you'll be in the open and you'll have spectacular views of mostly KLM and Delta aircraft, including 747s, 787s, A330s, 737s, 777s and more. There are serious spotters up here every day with huge cameras and backpacks full of photography gear.

The space is huge, complete with benches, tables, binoculars you can use for just 1 euro and even a restaurant that opens during the warmer months, and serves the Netherlands' own Heineken beer. The weather is often windy and always changeable, but your photos will look great even without a huge lens on your camera. During a layover here, TPG managing editor Alberto Riva got a sunnier day than I did on my visit.

You can get far, far closer to the action than you ever could at a US airport, as this KLM Boeing 777 turning into its gate shows (although if you have access, Delta's SkyDeck at JFK T4 gets you pretty close, too).

If you walk a little farther, you'll catch more single aisle, narrowbody jets belonging to other European carriers, plus a more complete view of the Buitevenveldertbaan, one of the airport's East/West runways (Schiphol has kindly named all of its runways, or "baans" in Dutch).

Right behind you, there's an actual airplane on the terrace — and not just any old plane, but a Dutch national icon: a Fokker 100, the last passenger jet ever built in the Netherlands. You can enter it, explore and snap some photos. If you speak Dutch (I cannot), you can read about the history of Dutch aviation once inside. So. Cool.

Amsterdam can often be cloudy and cold, but despite the weather, visiting the Panorama Terrace is a unique opportunity and frankly a must-see for any #AvGeek. Even if you don't consider yourself an aviation enthusiast, it's an awesome way to pass the time during a layover at AMS.

Related stories
Here are the best Black Friday travel deals of 2022
Great deal: Book business class tickets at premium economy prices with this Avianca LifeMiles sale
Holiday gift guide: TPG’s 22 travel-friendly picks for 2022
Vail Resorts lift-ticket sales capped; buy your Epic Pass by Dec. 4
Featured image by Besides great views of the aircraft in action, you're right in the action, and can hear all the sounds of the ramp, too.