10 of the Most Instagrammable Places in Athens 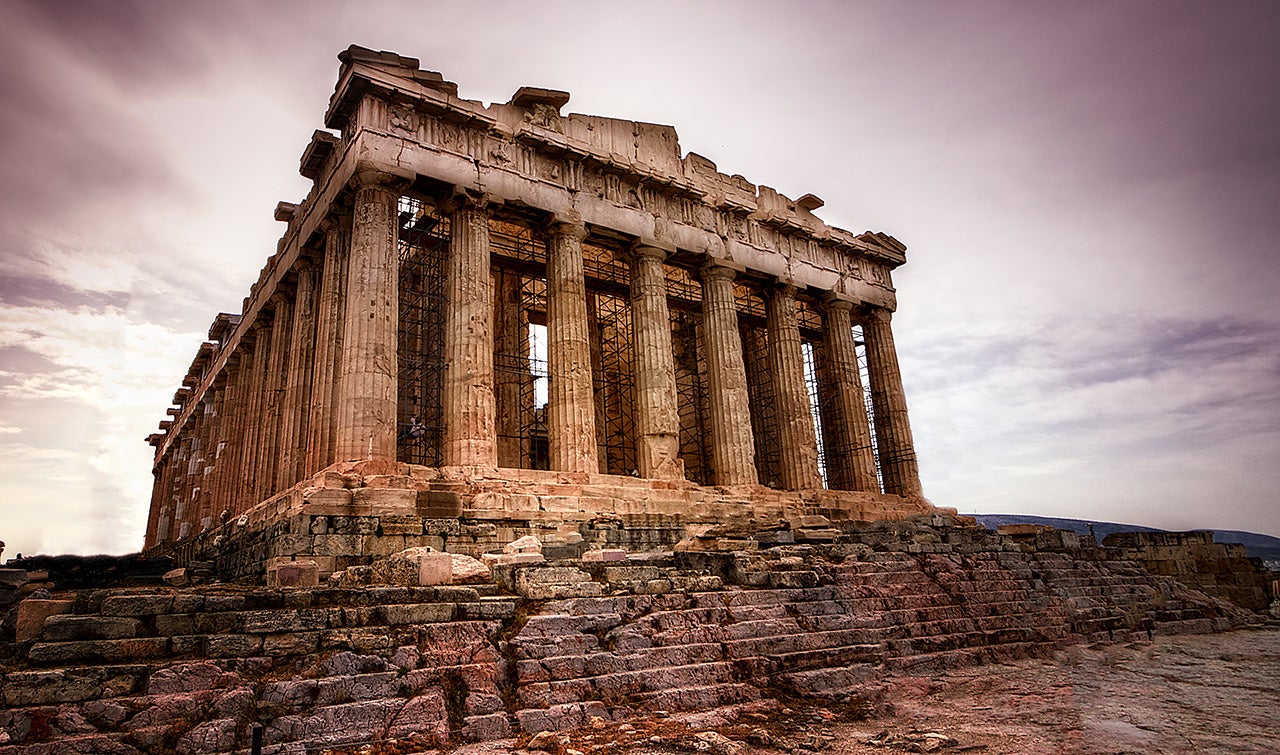 The "A" in Athens stands for Acropolis — in terms of must-visit sights at least. But it also means amazing, because there is so much more to see. Yes, the "Sacred Rock" is an excellent starting point, with the iconic and indomitable Parthenon perched at the top. But spend some extra time in Athens and you'll find a city that was made for Instagram. From Other Important Ruins like the Temple of Olympian Zeus to side streets you could mistake for Mykonos, the Greek capital is a multicolor swirl of eminently photogenic surprises.

At 512 feet tall and crowned by the Parthenon — built in 438 BC — the Acropolis may well be the world’s coolest flattop. According to UNESCO, the Acropolis and its monuments “are universal symbols of the classical spirit and civilization and form the greatest architectural and artistic complex bequeathed by Greek Antiquity to the world.” It's debatable what has greater Instagram appeal, the ancient ruins themselves or the panoramic views over Athens, but in any case don’t forget to inspect the Propylaia (the monumental entranceway) and Erechtheion temple on the north side.

Many first-timers in Athens do a double take upon seeing the Temple of Olympian Zeus — hey wait, doesn't that look like it should be part of the Parthenon? There are certainly similarities, as the assemblage of tall columns looks like it could have been lifted from a quadrant of the more famous temple at the top of the Acropolis. Unlike that one, the Temple of Olympian Zeus sort of bypassed the Golden Age of Athenian democracy: While construction started in the 6th century BC under the reign of the sons of the tyrant Peisistratus, it was only finished much later when the Roman Emperor Hadrian held sway. The impressive ruins are in a park-like setting that adjoins the National Garden.

Though it's a haven of calm today, the Agora was a clamorous place in classical Athens, being the chief marketplace area as a well as a meeting point and place of community significance, too. Evocative ruins are everywhere, with the Areopagus hill and Acropolis looming just above. Standouts include the Hephaisteion, also known as the Temple of Hephaestus and one of the best-preserved ancient Greek temples in the world, and the reconstructed Stoa of Attalos, now a museum with great exhibits relating to Athenian democracy.

He's a man in motion: Dromeas, or "runner" in English, is a nearly 30-foot-tall glass and iron sculpture parked in a tiny square on busy Vasilissis Sofias Avenue, next to the Hilton Athens Hotel. Both structures (hotel and statue) are iconic, but Dromeas is the more sharply dressed of the two — literally. When the sculpture was created by artist Costas Varotsos in 1994 it was placed in Omonia Square, but the running man is now very much at home in this well-heeled part of town. You might catch a glimpse of Dromeas from the window of a tour bus or taxi, but for maximum effect take the metro to the Evangelismos stop and Instagram this oversized athlete from up close.

5. Changing of the Guard (Evzones)

If the historical charge of Athens is symbolized by the Acropolis, Greek tradition in the capital is embodied by the changing of the guard at the Tomb of the Unknown Soldier, a prominent war memorial in front of the Hellenic Parliament building facing Syntagma Square. The elaborately adorned soldiers who guard the tomb are the Evzones, members of the Presidential Guard. Their kilt-like pleated fustanellas and turned-up tsarouchia shoes make them instantly recognizable. While the changing of the guard takes places every hour on the hour — 24 hours a day — for maximum Instagram impact come at 11am on Sunday. That's the only time the Evzones wear their most richly embroidered attire, which also foregoes the usual khaki for white.

Looking for a cure for the generic athletic stadium? Check out one of the very first, which the Greeks also call Kallimarmaro — "beautiful marble," and indeed, the stadium is built entirely from it. Its roots as a racecourse stretch back to the time of the Athenian orator Lykourgos around 330 BC, but the stadium took on its horseshoe shape (as well as a lot more marble) thanks to Herodes, son of Atticus between 139AD and 144AD. The Panathenaic Stadium received its most famous reconditioning in the run-up to first modern Olympic Games, held in Athens in 1896. For the most Instagrammable views, sprint to the top and snap.

If the existence of a secret neighborhood confers coolness on a city, then Anafiotika on the northeastern slope of the Acropolis definitely does that for Athens. These tiny lanes lined with whitewashed cubist-style houses are the upper reaches of the touristy Plaka, but overall it looks like a slice of the Cycladic islands. That’s because it was settled over a century ago by construction workers from the obscure island of Anafi — not too far from Santorini. Locate some pink bougainvilleas, add a white stucco wall and Instagram away.

Although it's more than 300 feet taller than the Acropolis, Mount Lycabettus was fated to be Athens's other mountain: there's just not as much room at the top for a prominent temple complex. The presence of a tiny Greek Orthodox church might even be seen as a slight spiritual riposte to the pagan Parthenon. No matter, for it's a lovely urban peak with a great restaurant to boot, and the stupendous views stretch from city to sea. Once you've hoofed it up the series of stairs through the pretty Kolonaki neighborhood (up to the end of Ploutarchou Street), let the trusty funicular do the rest of the work for you.

Lake Vouliagmeni, just 15 miles outside bustling Athens, was formed a very long time ago when a huge underwater spring let loose and caused a massive cave roof to collapse. The waters have therapeutic value due to the high concentration in salts and minerals. That, along with high water temperatures — averaging around 78 degrees, higher in summer and fall — means a dip in the lake can help mitigate all manner of dermatological and other ailments. It’s also just a lot of refreshing fun, with a breezy al fresco restaurant at lake's edge.

In the course of getting your eyeful of ancient ruins around Athens, you're bound to wonder where all that gleaming marble came from: it's actually Pentelic marble from a protected quarry on a slope of Mount Pentelicus, northwest of Athens and only about eight miles north of Athens International Airport. The Drafi waterfall is a favorite secret of Athenians seeking a refreshing escape from the city. Mountain springs on Pentelikon, as the mountain is also called, were abundant enough for the ancient Romans to build an aqueduct to supply Athens when they controlled the city.