9 of the Most Instagrammable Places in Jerusalem 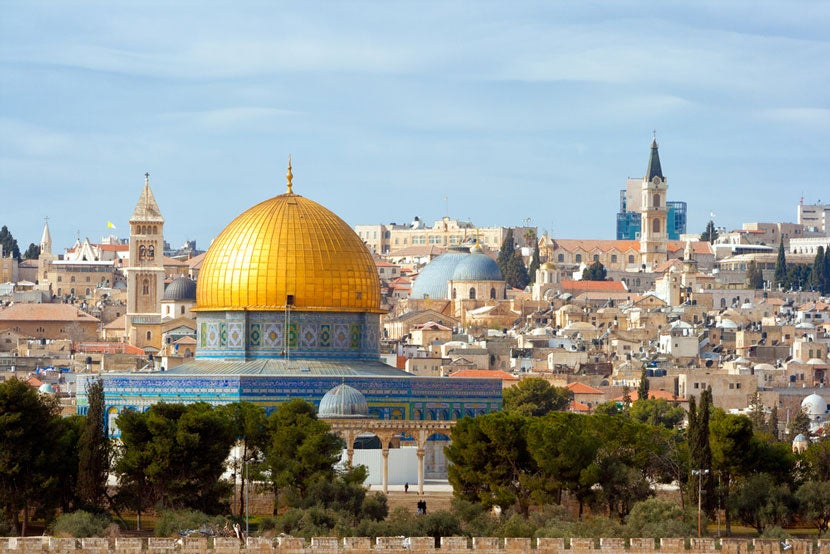 What for some is a little slice of heaven is to others a politically freighted headache. But think what you will, there is only one Jerusalem. And while it's always in current affairs — most recently as the designated capital city of Israel — the place is very, very old. With roots that stretch back millennia, Jerusalem is almost certainly the most famous religious city on the planet. There are impressive historic sites holy to three major faiths, mostly contained within the compact ancient city encircled by a meandering 465-year-old wall. But it's more than walls that will keep your 'gram slammin' in these storied and often sacred precincts.

The imposing Western Wall, a.k.a. Wailing Wall, is one of the most holy sites in Judaism, and one of those rare places impervious to the passage of time. Structurally, the wall, also called the Kotel, flanks the western edge of the Temple Mount (Haram al-Sharif in Arabic). It is all that remains of Jerusalem's Second Temple, which was destroyed by the Romans in 70 CE. Despite the destruction, the divine spirit is said to never have left. Jews from all over the world come here to place prayer notes in the wall's crevices. For the best Instagram possibilities, consider taking a picture either from the start of the broad plaza in front of the wall, or otherwise right up close.

2. Church of the Holy Sepulchre

The most illustrious church in Jerusalem is less famous for its façade than what's behind it: The Edicule, which houses the eponymous sepulchre, is a small two-room chapel under the main rotunda that marks the spot of the crucifixion, burial and resurrection of Jesus Christ. For that reason, the church is the holiest place for Catholics and Orthodox Christians. Completed in 335 AD, the church is on the site of what was once a Roman temple to Venus. Today, there are separate prayer times for the different Christian denominations.

3. Temple Mount (Dome of the Rock)

Central, striking and contentious: all three adjectives apply to this very ancient elevated ridge, wholly within the confines of the Old City of Jerusalem and extremely holy to adherents of both the Jewish and Muslim faiths. That's mainly because of the Dome of the Rock, an ornate Islamic shrine that dates from 691 and is said to be the location of Abraham's offering of Ishmael and the Prophet Mohammed's ascent toward heaven. For that reason, it is the third holiest site in Islam. But the shrine also covers the Foundation Stone, the holiest site in Judaism. This all adds up to a frequent flashpoint in the ongoing Israeli-Palestinian conflict — but if it happens to be open to tourists, don't miss the opportunity to humblebrag your visit on Instagram.

The Mahane Yehuda Market is fragrant, pulsating proof that there's more to Jerusalem than religion. In fact, you'll get a much more authentic — and tasty — idea of what the Middle East is all about here than in the souvenir-clogged byways of the Old City. The sprawling indoor/outdoor market is more than a century old and is bursting with every food product under the sun, from produce galore to spices to delectable halvah — and a heaping supply of good old fashioned haggling. You won't know what to Instagram first at this gourmet bonanza, which is located between Yafo Road and Agrippas Street. Hours are generally Sun-Thurs. 10am-7pm, Fri. 9am-5pm and closed for Shabbat on Saturday.

The guy responsible for the early 16th-century crenellated walls enclosing the Old City of Jerusalem was the Turkish Sultan, Suleiman the Magnificent. Of the eight gates, the one with the best name is Dung Gate (refuse used to be dumped there), and the one with the most mystery is the Golden Gate: it's been blocked for centuries and only when the Messiah comes will it be opened. But the stunner is Damascus Gate, named for the city that for a time supplied the city's rulers. Snap your 'gram outside the gate before retracing the route of the Cardo, the main drag in town 1,500 years ago, on the other side.

In Jerusalem, the large Israel Museum, which is home to the Dead Sea Scrolls and many other treasures, tends to steal the spotlight, but the much smaller Rockefeller Museum (which it manages) is also quite cool, and arguably more Instagram-friendly. Built as the Palestine Archaeological Museum in 1902 with the help of a two million dollar donation from John D. Rockefeller, Jr., the rambling, Art Deco-esque white limestone building seems to have jumped out of a scene from an Indiana Jones movie. Indeed the museum, which is located in East Jerusalem, houses a wide range of important antiquities from prehistoric times to the Ottoman period that were for the most part excavated in the 1920s and 1930s.

It's one of Jerusalem's biggest sleeper hits: the Abbey of the Dormition, where by Catholic tradition the Virgin Mary fell asleep for a very long time indeed (Assumption of Mary). In fact, a pair of spiral staircases leads to the crypt. The broad Byzantine basilica dates to the early fifth century. The Zion Gate connects the Old City to Mount Zion where the abbey lies, along with the Tomb of King David and Room of the Last Supper.

Amid the Old City's tangle of streets, none is more famous than the Via Dolorosa, the "Way of Sorrow," where Jesus is said to have walked to his crucifixion. This being Jerusalem, the route actually begins in the Muslim Quarter, at the Lion's Gate, with nine Stations of the Cross in between, culminating at the Church of the Holy Sepulchre. Along the way, you'll pass under the Ecce Homo arch, the spot where Pontius Pilate is said to have uttered "Behold the Man" in reference to a bound and thorn be-crowned Christ. The structure is part of the Church of Ecce Homo.

As the "world Holocaust remembrance center," Yad Vashem functions as Israel's principal memorial to the victims of the Holocaust and is an obligatory stop of virtually every foreign dignitary who visits the country. It is located on Mount Herzl, in the western section of Jerusalem outside the city center. While the exhibits are necessarily heavy, the main museum structure itself is both somber and striking. Designed by Moshe Safdie, it's a giant three-pointed concrete prism that culminates in a view full of something for which Jerusalem has long been deservedly famous: its light.