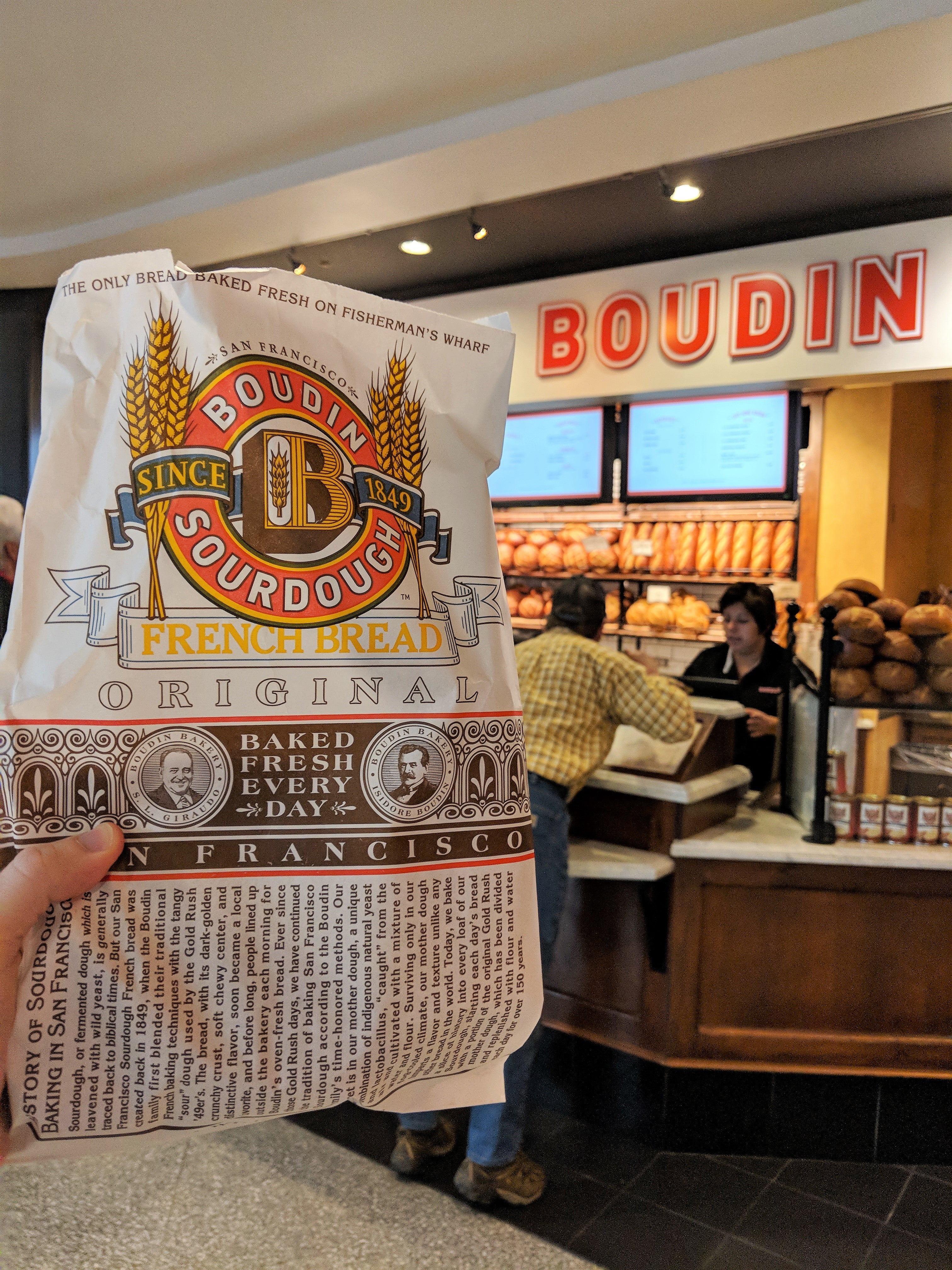 When a normal person is out of bread, they might head to the grocery store a few miles away to pick-up a new loaf. I'm not a normal person. Instead, I flew across the country to buy a loaf of bread from Boudin Bakery's in the San Francisco airport. If you follow @thepointsguy on Instagram, you might've seen my Instagram story chronicling the journey.

While the sourdough is pretty amazing, it wasn't just for the bread that I made the trek. And it also wasn't just as a research trip getting more experience on American Airlines domestic flights, although that was a nice benefit of the trip.

The primary reason for the flights across the country — and back the same day — was a mileage run. Yes, the fabled mileage run that was supposedly dead when airlines changed to a revenue-based mileage earning system and necessitated spending requirements for elite status.

The secret is: there's still a way of earning airline miles based on miles flown, while still earning progress toward elite status. And this round-trip was the perfect example of how that can work. The trick: American Airlines Special Fares.

My wife Katie and I were able to book these flights for 13,652 Chase Ultimate Rewards points total — 6,826 points per round-trip ticket. That's pretty amazing when you consider a standard one-way economy award flight costs 12,500 miles on legacy airlines. While some programs have discounts for shorter-distance awards, cross-country flights aren't going to qualify.

How did we get flights for this price? The Flight Deal posted a deal from Tampa (TPA) to San Francisco (SFO) for $105 round-trip. I jumped on Google Flights to find the dates and found they were very limited (which is why we didn't post about that deal on TPG).

Between my crazy travel schedule and the limited dates, I was only going to be able to book this as a same-day round-trip. Knowing that flights booked through the Chase Travel Portal typically count as Special Fares, I hopped on there and found same-day return flights for $102.40 each. At a redemption rate of 1.5 cents per Ultimate Rewards point, that's how we got to the price of just 6,826 points each.

As I mentioned, this trip was primarily a mileage run. So, let's dive into the numbers. If we booked this $102.40 round-trip flight through AA.com, it would earn miles based on American Airlines' revenue-based earning system. Subtracting out the US Transportation Tax, US Passenger Facility Charge, US Flight Segment Tax and US September 11th Security Fee, AAdvantage would only count this trip as having cost ~$60. So, the earnings would be:

While this would still be a cheap elite mileage run at 2.12 cents per mile, those EQD and award mile earnings are sad. This is where Special Fares are amazing. Here are the earnings for the same flights booked as Special Fares:

That's right. We earned 705% more EQDs and award miles by booking the same flights through Special Fares instead of through AA.com.

Tips From the Trip

In addition to the Special Fares calculations, I also shared a bunch of tips via Instagram story that make my constant 365-days-a-year travel a lot more bearable. In case you missed them, here they are:

Wi-Fi: I knew that I'd need to be online that day to help cover news for TPG and send out live updates on social media. Rather than buying a flight pass on each flight (~$16 each), I knew that I could save money by buying a Gogo day pass before taking off. While I'm bummed that the AA-specific $16 day pass option has been removed, I was still able to purchase a $19 day pass and use it all day.

Seats: This is a trick many couples probably already do: Pick the aisle and window seats of a three-seat row and hope that you don't get a middle neighbor. The gamble worked for us on both flights after we missed out on getting an upgrade:

If someone does take the middle seat, we typically will give up the aisle seat and sit together. But, we — like seemingly many couples — will sometimes just stick with the window and aisle:

Upgrades: To have the best chance of getting upgrades on each segment, we have learned that you have to split record locators when traveling together. If you don't, the airline's upgrade system will skip you if there's only one upgrade available — which can happen in multiple iterations. Because of this quirk, we've been skipped by lower-tier flyers on the same flight.

Entering the "wrong" terminal: We arrived in San Francisco in the American Airlines gates, but Boudin was in another terminal by United gates, and those terminals aren't connected airside. No worries, as I've learned from experience — and confirmed with a TSA spokesperson — TSA doesn't care which terminal you enter, as long as you have a same-day boarding pass. A United contract agent tried to stop me from entering the security line, but the TSA agent had no issues with us entering the "wrong" terminal.

Lounging: While we were in that "wrong" SFO terminal, we made sure to use my Platinum Card® from American Express to visit the SFO Centurion Lounge.

This was another trip where my Citi AAdvantage Executive World Elite Mastercard was used extensively. The card gets you access into Admirals Clubs whenever you're flying. And my annual fee on this card is $0 as I'm an authorized user of another TPG staffer. Each cardmember is able to add 10 authorized users for free, and each cardholder can take up to two guests with them into the lounge.

So, that means that Katie and I were able to grab breakfast in Tampa (TPA), power in Phoenix (PHX), coffee and snacks in San Francisco (SFO) and a couple glasses of complimentary wine in Dallas (DFW).

On-board power: It's no secret that American Airlines has a large sub-fleet of old US Airways planes. These planes weren't the most modern when the merger happened, and while they've gotten seat cover upgrades, these planes haven't gotten any love since. This means they still don't have power or in-flight entertainment. Connecting through the old US Airways hub of Phoenix on our way from Tampa to San Francisco, we were pretty sure that we would be on an old US Airways plane from TPA-PHX-SFO. So, we made sure to bring a fully-charged power bank for our phones and power our laptops during the layovers.

Same day flight change: While Dallas/Fort Worth is the headquarters of American Airlines, we've found through experience that old US Airways planes often are found on the SFO-DFW route. So, we made sure to check for any clues about which aircraft type we would get from SFO-DFW. We didn't have to dig in too deep; we found that our SFO-DFW flight departed from the same gate that our PHX-SFO flight arrived. So, it was going to be the same US Airways plane. Not willing to go another flight without power, we used our Same Day Flight Change elite benefit to switch to the next SFO-DFW flight, which I confirmed via ExpertFlyer seat map was on an American Airlines aircraft.

Yeah, I know that we are crazy to fly across the country and back the same day to "buy a loaf of bread." But, as you can see, it was a lot more than just that. By booking the flight as Special Fares, we were able to earn 8x the number of miles and elite-qualifying dollars that we would have earned by booking it another way. Plus, it was a great opportunity to take TPG readers along for the ride and show you how I put the tips we share on TPG into practice on a daily basis. Hope you learned a few tricks for your next trip!

Related stories
Bask Bank raises the mileage earning rate on its AAdvantage savings account — what you need to know
Use these Amex Offers to save up to $60 on your next Delta flight
Targeted Premier 1K members eligible for bonus miles when checking in and checking a bag on the United app
Current airline elite status match and challenge options you should know about
Featured image by Maker:S,Date:2017-11-20,Ver:6,Lens:Kan03,Act:Lar02,E-Y