Shark Tank’s Barbara Corcoran Flies Economy Better Than You Do 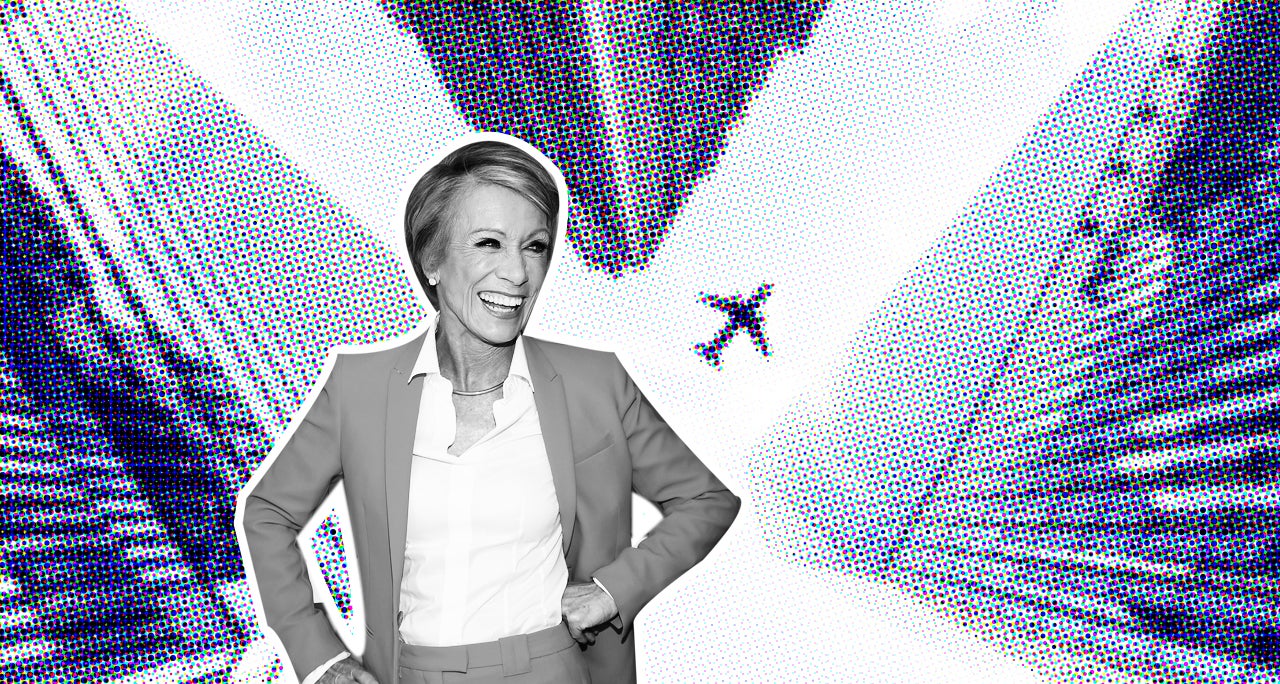 Shark Tank’s Barbara Corcoran Flies Economy Better Than You Do
This post contains references to products from one or more of our advertisers. We may receive compensation when you click on links to those products. Terms apply to the offers listed on this page. For an explanation of our Advertising Policy, visit this page.

Sure, the television star and Corcoran Group founder has flown private, and she's also racked up plenty of business-class miles giving speeches and advising entrepreneurs across the country, but when the flight’s on her own dime? You’ll find her in economy, laying a cloth napkin out on the tray table, and tucking into gourmet cheeses she brings along for the ride. (This recent Instagram with five kinds of cheese, charcuterie and even a croissant says it all.)

Here, she shares with TPG her best travel hacks, her uber-effective “plastic bag trick” for packing and her worst flight ever.

Where you can typically find her

"I always fly economy if I’m paying the tab because I’m too cheap to spring for an expensive ticket. I’m even too cheap to use free miles to upgrade because I realized those free miles can buy one of my relatives who don’t have the money a free ticket to somewhere."

"My business travel is always first class because the client always pays, but even in first class I always bring my own food, because I’ve found over the years airline food has gotten terrible. I’m not even a picky eater, but I know what I like, and I know that if I have fresh bread, delicious cheese and a bottle of wine, I’m going to be the happiest traveler in town."

"Once you put a cloth napkin on the tray, it’s practical, things don’t slide off — and most importantly, I’m suddenly at a restaurant in my mind. It sets the tone and makes a difference, especially when you’re squeezed in the middle seat. All of a sudden, I’m in my own universe. I’m floating above the clouds having my gourmet meal."

"I usually ask for the window seat and I typically get it."

"I am enormously productive on an airplane because it forces you to hyper-focus. I also don’t use my phone, which is a rare occurrence in life. I use it to accomplish things that I don’t want to do or that I’m stalling on, and it forces the issue since I have a deadline. From the moment I take off to the moment I land in LA — from New York to LA is a good five-hour flight — I’ll work without looking up or coming up for air, except for that lovely break to eat."

"I am the chattiest person you’ll ever meet. I love people and I love a great conversation, but somehow I turn into a different person when I hit that seat. I’m there because I have to be. I’m not there to make a friend and because I look so focused, I don’t think people bother me. Sometimes I’ll get attention, 'Oh, you’re the girl on Shark Tank!' and I smile and say thank you and pose for a few selfies."

"I used to regularly miss my flight because as unsocial as I am on the plane, I don’t work at the gate, and I would sit at the gate and inevitably talk to a lot of people. I know this sounds bizarre, but I would say goodbye to the people, they’d get on the plane, and then I’d be sitting there at the gate all by myself 10 minutes later and then realize … of course, that was my flight. That sounds ridiculous, but it happened so often to me I had to think of a solution. My husband suggested that I set my alarm [before the flight] and for me it was a lifesaver."

"I was giving a speech in Washington DC ... and I was racing to get on the earlier flight to New York City that would make the difference between me having dinner with my family. I ran to the gate, handed my pass, got on the flight, and of course it was delayed. There was a woman in my seat and I took the seat next to her, rather than disrupt her. Then, they said they had to take all the luggage off the plane, so they did and counted the luggage, came back and walked the aisles and counted heads."

"Then we had a pilot with a ridiculous sense of humor. He told us about the weather Syracuse was having. Finally, I get off the plane and tell the cabbie on the curb that I need to stop at Citibank on the corner of 89th and Madison and pick up cash, and then [onto] the corner of 94th and Park. And he said, 'What, do you think I’m crazy, lady? You think I’m going to trust you?' Really arrogant Brooklyn guy. He said, 'Go get cash in the airport and then I’ll take you.'"

"He walked me into the airport, and then it all hit me: The pilot. The rushing. The unloading of the luggage. I went up to the counter, and I said, 'Excuse me, ma’am, can you tell me where I am?' And she said, 'Syracuse.'"

"That’s when my husband said, 'You've gotta get a grip on these planes, Barbara.' I started setting my alarm, checking my gates and getting to the airport two hours early. Ever since that flight to Syracuse four years ago, I have never missed a plane again."

"I give five or six speeches a year, and I typically travel to Las Vegas, Orlando, LA — recently, I was in Nashville."

"Now that Shark Tank airs in so many countries, I’m getting speaking requests from other countries like India, Bosnia, or places where I’m like, 'Ooh, I’ve never been there.' However, they’re always when my kids are in school. I have one son who’s out of the house, but I have a daughter who’s 12 and I won’t travel while she’s in school. All the international travel I do is with my family."

Do you let the kids sit in business class?

"Are you kidding? No, we’re all in coach. When my son was five, he said, 'Why can’t we sit in those big seats?' and I said, 'Get a job.' My daughter travels with her dad, and my husband’s different — he will kill himself to get a business class seat on free miles. She had one trip to Orlando with my husband and then she traveled with me and said, 'Couldn’t we do what Daddy did and sit in those nice seats up front?' and I said, 'Get a job.'"

"I never check a bag. I’m the tightest little packer you’ll ever meet. And what I’ve found, even with the smallest carry-on bag, despite how tightly I pack, I will only use what’s on the top half."

"I use a steamer, because that allows me to pack very light. It’s lightweight, about the size of one shoe."

"I always pack from my feet up. If I need sandals and low heels for the trip, I’ll be very careful as to the color so that it matches every single thing in that bag."

"I take a cheap wire hanger from the dry cleaner, and I’ll put a dry cleaning bag on the hanger, then I put my dress on top of the plastic bag, and then I’ll put another plastic bag on top of my dress, and I roll it as tight as I can, almost like I’m making a dessert with a little jelly in between, and I drop it in my bag. Even though I bring my steamer, it never wrinkles."

"When I bring a suit, I stuff a plastic bag in each arm softly, because when fabric hits fabric, it wrinkles. I do the same thing with my husband’s suits, which are heavier and much more capable of getting disheveled looking. And for cotton blouses — I’ll fill out the blouse with the plastic inside, then fold it on itself, pack it and roll it. It never wrinkles. So that’s the plastic bag trick, as I’ve called it. You’re going to send me a thank you for this when you first start doing it."