10 Cities Outside of New Orleans That Celebrate Mardi Gras 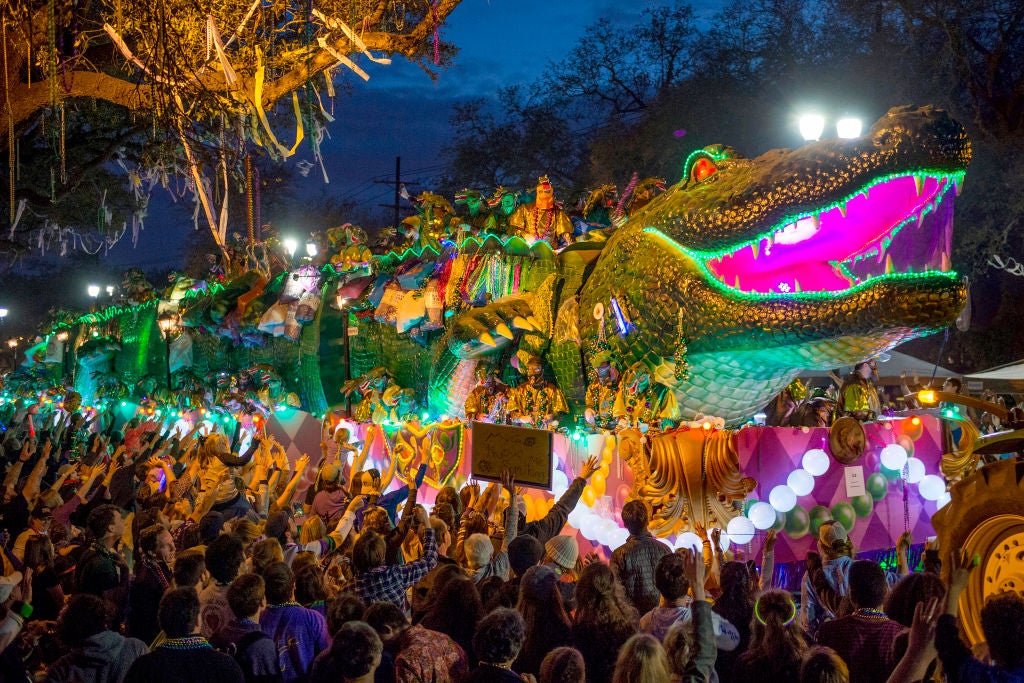 Mardi Gras — aka Fat Tuesday, Carnival, Shrove Tuesday — is the celebration leading up to the traditional lenten fasting season that takes place in the Catholic community. New Orleans was the first city in the country to celebrate — although Mobile, Alabama residents may disagree — and Mardi Gras celebrations have become major holidays in cities and countries around the world, from Brazil to Australia. Each city recognizes and celebrates Mardi Gras or Carnival in its own unique way, but they all have one thing in common: lots and lots of partying and dancing. Take a look at these cities below to find some of the best places to celebrate Mardi Gras outside of New Orleans, and wherever you go, keep in mind what they say in NOLA: laissez les bon temps rouler!

Carnevale di Venezia — the Carnival of Venice — has a long history. Mardi Gras was first celebrated on the island city in the 12th century during the Renaissance period and became a major festival until the late 18th century when Francis II, Emperor of Austria, forbade the holiday and the use of masks. The local government brought back the holiday in 1979 and it's been a mainstay ever since. The locals celebrate by wearing traditional masks made out of anything from leather to glass to porcelain, and Carnival brings three million visitors to the city every year. The main event takes place on Fat Tuesday when the the masqueraders compete in front a panel of judges for the best mask.

Like New Orleans, St. Louis was founded by a group of French settlers but its French Catholic population dwindled shortly after and Mardi Gras was not a widely celebrated festival. Mardi Gras was revived in the 1980s when a group of locals sat at their favorite watering hole in downtown St. Louis and marched over to another neighborhood bar. Now, it's more than just a neighborhood party — things kick off during 12th night in early January and the party lasts until Fat Tuesday. The event has garnered huge corporate sponsorships from companies like Bud Light, Hilton Hotels, Red Bull and Coca-Cola.

It's not simply Mardi Gras in Sydney; it's Sydney Gay and Lesbian Mardi Gras, an annual LGBT pride parade that attracts hundreds of thousands of people to the harbor city every year. It's one of the largest pride events around the world and the parties and events span three weekends from February 16 until March 4. From drag shows to concerts to a carnival, there's an event for everyone in Sydney to attend. MTV has called Sydney Mardi Gras "a smorgasbord of food, markets, comedy, dance and live music for all ages."

Quebec's Carnival celebrations are said to rival their southern neighbor, New Orleans. It is a little different though — they celebrate their Winter Carnival, which is the largest of its type in the world. It did, however, begin as a Mardi Gras celebration that was passed down from the French influence in the Canadian city; the event took a different turn in Quebec because of the intense cold weather, and in the late 19th century, the Winter Carnival became what it is now. Over the years, the celebration took on unique traditions, like an icy canoe race along the St. Lawrence River, giant snow sculptures and blasting of a red trumpet — all celebrating aspects of Quebec's history.

Rio's Carnival is the largest in the world with two million revelers every year. Carnival is a national holiday in Brazil — Bahia and Pernambuco, two Brazilian states, are also known for their Carnival celebrations. Samba, the music that's synonymous with Carnival in Brazil, can be heard across the Rio during the holiday celebrations and Carnival is the culmination of eating and drinking, dancing, partying, costuming and parade-watching. Since 1984, the parade in Rio has been held at the Sambadrome where the top samba schools compete for the championship title each year.

2018 marks Galveston's 107th Mardi Gras celebration. Hailed as the third-largest Mardi Gras celebration in the United States, the beach town prides itself on being one of the only cities where everyone can enjoy the parades passing by — with their toes buried in the sand on the beach. This year, the city expects 300,000 attendees that will participate in not only the city's parades, but also the 30+ concerts, balcony parties and masked balls. Most of the action takes place in Galveston's downtown area and people of all ages are welcome to join the Fat Tuesday fun.

The first Carnival in Copenhagen was in 1982 and had over 500 dancers and over 60,000 attendees. Today, the annual holiday has grown into Denmark's largest festival for world music with 120 bands, thousands of dancers and more than 100,000 attendees. Stages are set up at different venues for bands of varying genres to play across the city. Dancers in the parades wear costumes that resemble Rio's Carnival: bright colors, feathers and embroidered beads with matching headpieces, and they even play samba music like they do in Brazil.

Every year, the French Riviera transforms into a floral haven as Nice prepares for its annual Carnival celebrations. The city hosts multiple Carnival parades, but the city is known for its traditional flower parades where floats are completely covered in petals and participants match in colorful clothing. This year's theme is King of Space and there are six parades, each with 17 floats and more than 1,000 paraders from all over the world. The parades go on during day and night parades with the night parades rolling as the Parade of Lights.

Every year, the Canary Islands erupt with colorful costumes and loud music as Carnival approaches. The entire archipelago celebrates the holiday but Tenerife is the epicenter of action during as Fat Tuesday revs into gear. The biggest and most recognized event that takes place during Carnival in the Canaries is the Grand Carnival Queen Contest. The participants are all young women who wear extremely large and spectacular costume dresses and headdresses that can weigh upwards of 50 pounds. There's a similar contest for the LGBT community where a drag queen is crowned for his/her costume.

10. Port of Spain, Trinidad and Tobago

Trinidad and Tobago holds what some call the Mother of all West Indian Carnivals. As Carnival gears up on the island, the bright costumes and exuberant celebrations start rolling out. In addition to the costumes, stick-fighting and limbo competitions are important aspects of the festival. J'ouvert, a festivity that dates back to the origins of Mardi Gras, is a dancing street party that lasts from dark to light in the mornings leading up to Fat Tuesday.