Norwegian Wants to Seduce Your Ears With New Onboard Music 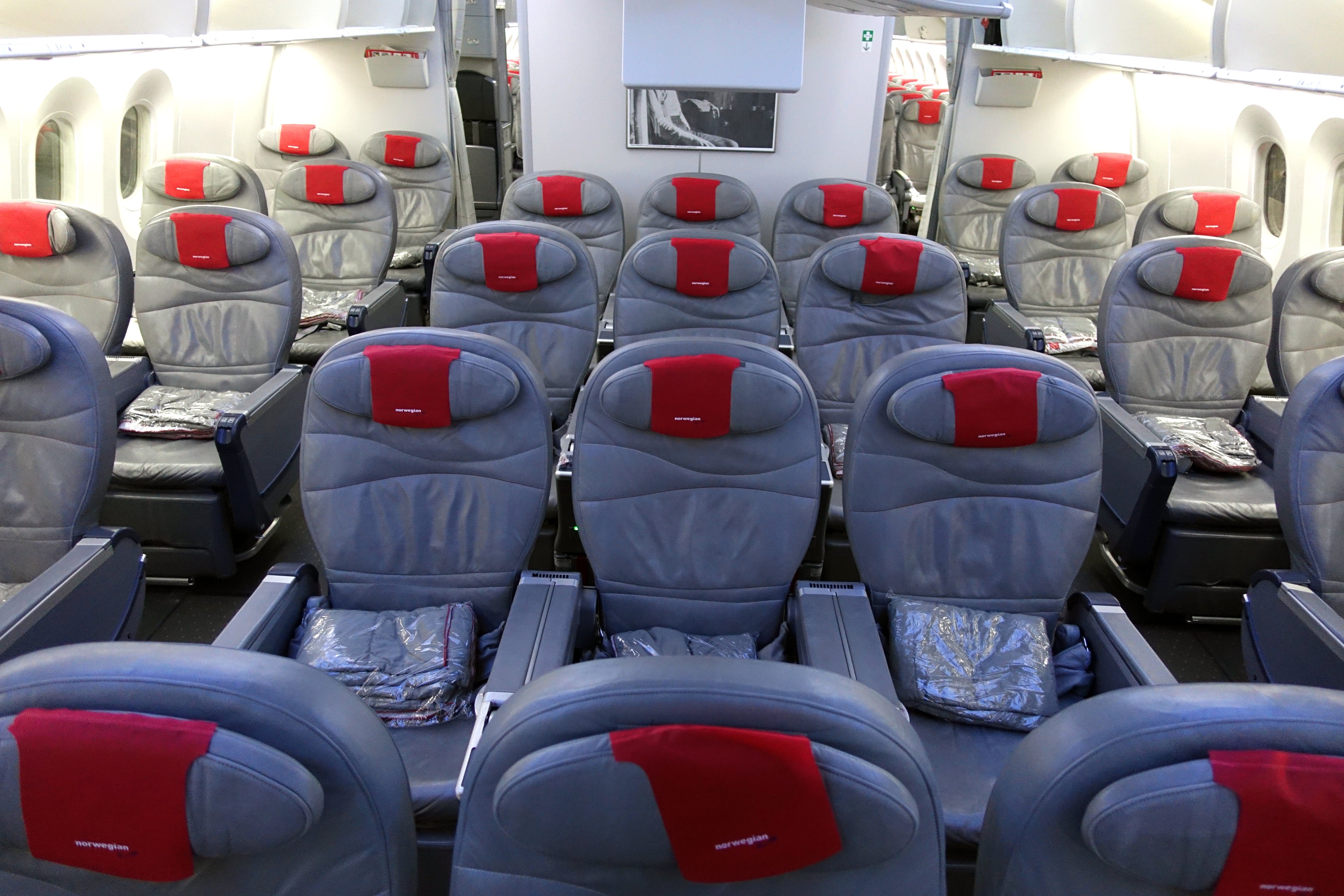 Norwegian Wants to Seduce Your Ears With New Onboard Music
This post contains references to products from one or more of our advertisers. We may receive compensation when you click on links to those products. Terms apply to the offers listed on this page. For an explanation of our Advertising Policy, visit this page.

Is cringeworthy airplane music headed for the exit? You know what that sounds like: It's that sonic smack to the ears you get as you step aboard, in the form of some basic pop-esque noise (including but not limited to Justin Bieber) piped in until the doors close. Sure, there are more irritating things that happen on planes, but having to endure bottom-of-the-barrel music is firmly on that list. Fortunately some airlines are hearing your pain, and help is on the way.

Norwegian is leading that change, and it isn't just getting better music to board to. It has invested heavily in a sonic signature of sorts, called, appropriately enough, Northern Colors. "The intention of the project was to find a way to reflect the Norwegian brand identity through sound and music," says Julius Støback, Norwegian 's senior brand strategy advisor. "We wanted a melody that people would recognize, that could help as a mnemonic to increase brand recall in advertising. But we also wanted it to add to the experience of boarding our planes, adding peace and relaxation to our customers journey as they sit down and get ready for take-off."

Max De Lucia, head of brands and producer at London-based Adelphoi Music, the company Norwegian engaged to reshape its sound, told TPG that "a lot of the music [Norwegian] had before was quite repetitive for some passengers. Now that canned pop music you heard boarding the plane will be switched out for something slick and custom-made. At the core of his musical theme is an eight-note idea that’s also the basis of a much bigger boarding music piece, and there’s also a de-boarding music experience as well."

Støback explains that "the hero track is the basic version, a two-minute song which is a complete piece of music in itself, 'Northern Colors' in its original version. In there is the buildup of the eight-note melodic theme which makes up the mnemonic, or sound logo."

The airline began introducing Northern Colours late last year and is continuing in earnest now; by the end of 2018 the new anthem, or key portions of it, is what passengers can expect to hear on virtually every Norwegian flight.

Audio branding gets its wings

It might seem like the easiest and cheapest fix for an airline like Norwegian would be to simply pipe in better music — old A-ha tracks or perhaps some Röyksopp, for an airline based in Norway — or, to keep costs down, maybe have none at all. But Norwegian saw its lackluster acoustic stage as a bona fide point of departure. The airline “wanted a theme that would telegraph its stature as not just a Norwegian but a global business and airline — they didn’t want to seem too Norwegian in other words but wanted a global sound,” De Lucia says.

They enlisted a Scandinavian composer and did the recording in a studio in Trondheim, Norway. “The heart of the creative idea was to record elements of this music in Norway itself, which we did, in an amazing studio on the fjords there and using local musicians and ensembles, an orchestra and a choir with female voices, all sort of peppering it with Norwegianness,” De Lucia says. “In terms of the actual making of the project we went very Norwegian.”

It's all about audio branding, which means basically taking a logo to the next sensory level. “Any company wants to distinguish itself from others,” says Dr. Daniel Levitin, a neuroscientist at McGill University in Montreal and author of This Is Your Brain on Music. “One of the biggest ways they do this is with logos: the Coca-Cola distinctive script and color scheme is so identified with the product that if you see it written in another language, it still looks like Coca-Cola. So Norwegian is using the aural equivalent of a logo, which is just part of making them distinct from competitors.”

De Lucia shares that assessment: “Travel is typically a quite stressful thing for people,” he says. “And especially if you’re a frequent flier, it’s the level of that attention to detail from a brand that kind of wins your loyalty as a passenger.”

As for airlines' sonic signatures Norwegian didn’t get there first, of course. United was one of the earliest adopters of audio branding when it began incorporating George Gershwin’s Rhapsody in Blue in its television ads. The now arguably overfamiliar melody — some go so far as to call it bastardized Gershwin — finds its way into other on-board touch points such as informational flight video content. Norwegian's new tune will similarly exist in a variety of touch points, such as a 35-minute ambient version used for boarding and deplaning.

Levitin, the neuroscientist, says that “Virgin America had a very distinctive set of musical colors they used on board.” That raises the interesting topic of the sound that different airlines go for. Virgin’s electro chillout music paired well with its pioneering mood lighting, which may well have been a nod to the cool image the airline wanted to project.

An before Virgin, of course, there was British Airways, which for a while seemed like the coolest airline on earth on account of its revolutionary ads that used Aria, an electro makeover by Yanni and Malcolm McLaren of the Flower Duet from the 1883 French opera Lakmé. You didn’t have to love the kumbaya subtext of the (admittedly breathtaking) visuals to be utterly entranced by the music, which back in 1989 sounded like the future. Not surprisingly, the BA TV spot was a reference point in Norwegian’s Northern Colors project.

Norwegian's collaboration with Adelphoi appears, even with repeat listenings, to be a winner. Think introspective Moby instrumental meets low-intensity thumping electronic dance music: in other words, modern. "With its electronic texture and programmed beats as its base, but with a leading layer of acoustic instruments and choir, it sounds edgy, modern and timeless," Støback says. He calls it "a dynamic and uplifting track (...) much like the Norwegian brand itself."

If there’s anything that unifies the art of sonic signature-making, whether it’s a low-cost airline with rule-the-world aspirations or a legacy carrier, it is that imperative to be enjoyable without jarring. No easy feat. As groundbreaking as British Airways was in finding the right balance, in marketing materials if not actually on board, there was also Brian Eno’s 1978 album Music for Airports. Inspired by Eno's kicking around Cologne-Bonn Airport, it’s one of the most influential examples of ambient music, meant to soothe frayed senses. Airlines certainly don’t want to stir you up as you navigate a cramped aisle on your way to seat 25C, but they also want you to want more of them.

From sonic bloom to single?

In Norwegian's case, the new anthem is off to a promising start; Støback himself says he's received emails from crew to express their appreciation for the brand's new and hugely improved, gently symphonic modern sound.

“This mnemonic will be the first thing more than 30 million passengers will hear on their flights this year,” says De Lucia. “Not a soundtrack to an ad, it’s a theme that will speak to any audience to convey the soul of Norwegian.” He adds that “this suite of sonic arrangements that we’ve given them is lots and lots of different arrangements of the theme that can sit in very different musical contexts."

We can't imagine that soulful electro neo-Nordic chillout is to everyone's liking. Who knows, maybe this is what millennial pink sounds like. But any which way your neurons size it up, you’re probably going to appreciate efforts like Northern Colors. “Some planes are playing it right now," De Lucia says. "We’ve been re-versioning all the advertising as well and it’s rolling out now across the world. It might even be released as a single later this year.”

Featured image by The premium cabin on a Norwegian 787

Our points-obsessed staff uses a plethora of credit cards on a daily basis. If anyone on our team wouldn’t recommend it to a friend or a family member, we wouldn’t recommend it on The Points Guy either. Our opinions are our own, and have not been reviewed, approved, or endorsed by our advertising partners.
See all best card offers
Related stories
Deals
Fly in business class to London for less than $2,600
Reviews
A new hotel that needs to work out the kinks: A review of the Hyatt Regency Salt Lake City
News
Lyft quietly adds wait time fees to most rides
Guide
What is Marriott Bonvoy elite status worth in 2023?