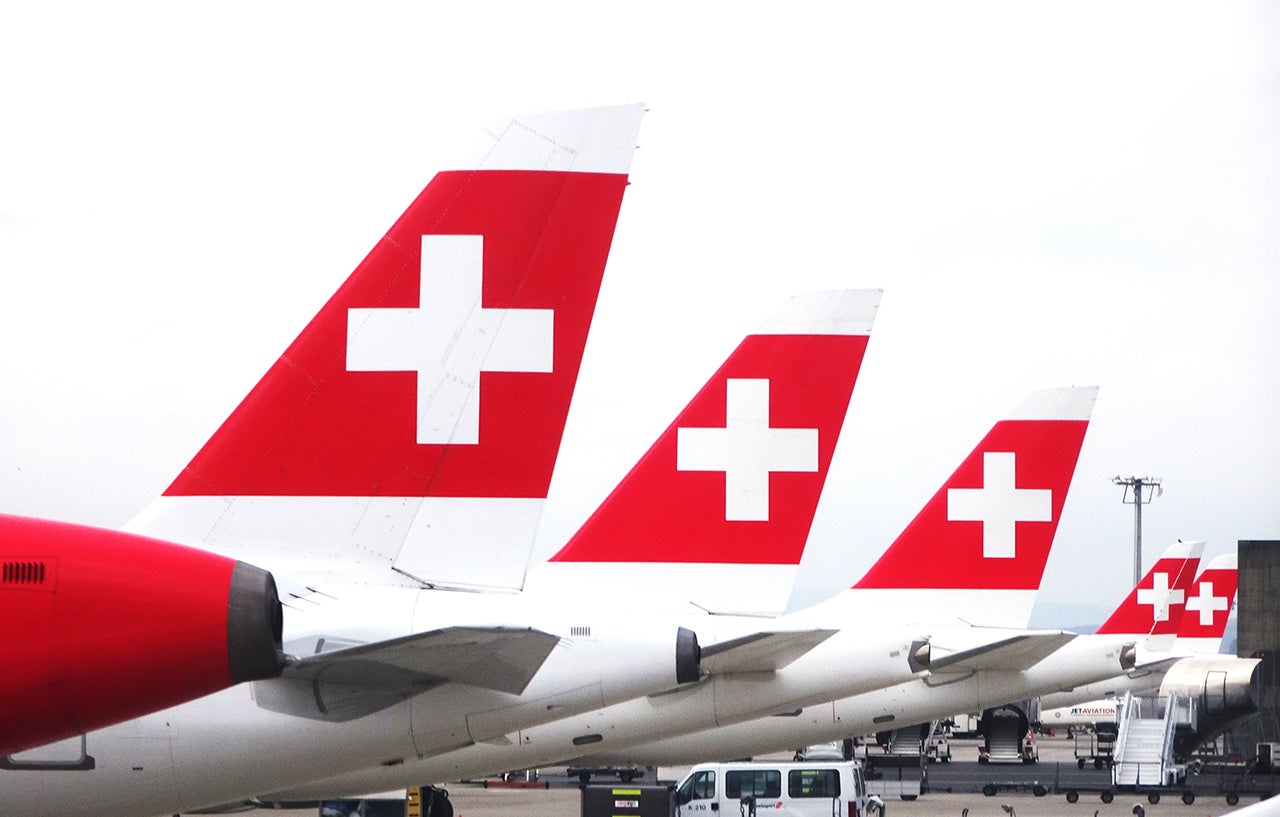 I found a great fare to Nice (NCE) from my home in Los Angeles (LAX). The outbound put me on Lufthansa through Munich, a solid economy-class experience on an Airbus A340-600. The return had me on Swiss through Zurich (ZRH). How would the long flights over the Atlantic compare?

I'd heard great things about flying with Swiss and I was eager to fly the airline for my first time. The flight from Nice to Zurich was on an Airbus A319 and the long haul from Zurich was scheduled on the flagship of the Swiss fleet, the Boeing 777-300ER, which offers three classes of service. TPG has already reviewed the Swiss experience on the 777 in first class and business,

I had booked the flights on United.com and charged the fare to my United MileagePlus Explorer Card, which earned me 2x miles. Normally I would charge it to a card with a bigger bonus (like 5x for airfare on The Platinum Card from American Express), but I was trying to spend enough on the card to waive the Premier Qualifying Dollar requirement for Premier status.Unlike my outbound flight on Lufthansa, which accrued no MileagePlus earnings, the return on Swiss would get me 945 award miles and 5,939 Premier Qualifying Miles. The low fare (only $412 round trip!) meant just 135 PQD on the Zurich-Los Angeles leg.

Though the booking was done on United, everything regarding the flight was handled by Swiss. United's eTicket provided the Swiss booking locator, and I entered it on Swiss's Android mobile app. I was able to check in and select a seat online, choosing one on the aisle in the middle section with three empties next to me — fingers crossed it would stay that way.My flight from Nice arrived at 11:53am at Terminal A for a 1:10pm departure to LAX from Terminal E. Transferring involved a quick trip through passport control, followed by a train and walk.

I got to the gate at 12:20. Nothing was happening and I wished the departure monitors hadn't instructed me to go zum Gate, to the gate, because I could have used the extra time to get a snack. On the upside, Zurich airport Wi-Fi is provided for free for two hours and it worked great. It was easy to sign in using my Boingo Wireless credentials (a handy perk of the Amex Platinum.) The very friendly gate agent said I still had the three empty seats next to me on the flight. Our 777, tail number HB-JNE, was waiting. It had been delivered in June 2016 and was therefore just 17 months old.

Boarding was scheduled for 12:35. With fine Swiss timing, it began on the dot and I was at my seat in less than a minute. More than one passenger had trouble opening the overhead bins, which dropped down with a hydraulic piston, but they provided lots of space. Economy class was in the dense 3-4-3 layout that's now become commonplace on 777s in coach.

The overall configuration is in three classes with 340 seats total: 8 in First, 62 in Business, and 270 in Economy with 32 inches of pitch and 17.3 of width, the latter measurements pretty standard for this airplane.

It was snowing outside and the cabin was cold. The color scheme didn't warm things up — shades of browns and taupes aren't an inspiring design — but everything seemed clean and in good working order.

Of those 270 coach seats, there were many empty ones on this flight. I had an entire four-seat middle to myself. While not exactly a sofa, the seats provided quality sleep when I lay across them.

Legroom was decent, and though my knees were closer to the seatback than I would've liked, I was angled so the squeeze didn't feel as bad as it looked. The recline was excellent and actually made me comfortable (in Economy!), especially when combined with the fine-tuned adjustability of the headrest. The space underneath the seats wasn't as well-designed. For some reason, the space was asymmetrical — essentially three under-seat spaces for the four seats, with dividers that don't match up with each seat. This could lead to some awkward placement of bags and feet on a crowded flight, but gladly that wasn't an issue on this one. The roomy seat pocket had two small compartments on its front and an external cup holder.

Flight attendants (I was told "about 14" work this flight) were professional and efficient and communication from the flight deck (in German, then English) was very good. With a scheduled departure of 1:10pm, at 1:05, the captain announced we were waiting for connecting passengers but also, due to snow, we would have to de-ice, which would "take some time." He expected to be airborne in "about half an hour." Boarding was completed at 1:15 and we pulled from the gate at 1:18.At 1:25, we pulled into the de-icing area where I slid into a window seat to watch a thorough bath with de-icing fluid.

It took several minutes and several passes, and the AvGeek in me was delighted. We pulled away at 1:42 and by 1:50 wheels were up, 40 minutes after our scheduled departure time.

Not long after, Wi-Fi service became available. It was sold by the megabyte, with prices ranging from 9 to 59 Swiss Francs (about the same in $US). I had a great deal of difficulty connecting.

Later in the flight, after several attempts, the connection finally came through. I exchanged a few texts but my data ration got used up lickety-split. Inflight Wi-Fi speed can be affected by many factors, and in this case, the system really did not deliver.Unlike the Wi-Fi, the IFE system was outstanding, with a sizable, adjustable screen and perhaps the most responsive and clear layout I've seen. It was easy to control the light and turn the screen completely off.

The system offered a very international selection of movies, with some reasonably recent releases, organized well and including a "Made in Switzerland" section and a "Flying Film Festival." Audio offerings included music, audiobooks and podcasts.

For maps, the Airshow 3D gave some really cool perspectives and flight info, allowing me to pinch and zoom and swipe all over the globe. The 3D Earth map did a fine job of showing the true route of our flight, as opposed to the seemingly weird route that would have appeared on a flat map. (Long-haul flights follow Great Circle routings, which actually are the shortest distance between points on a sphere, but those routes appear distorted when projected onto a bi-dimensional map.)

The USB port worked well but there was no in-seat power, a puzzling miss on an otherwise very modern in-seat system. Lavs located in the center and rear of the plane were of a comfortable size and well-lit.

Food and drink service started quickly and continued at a good pace. Fewer than 20 minutes after wheels up, a small packet of rosemary mini-breadsticks arrived with a choice of complimentary drinks. They were cleared 15 minutes later and a popup on my screen showed the meal choice: chicken or vegetarian pasta. I chose the "Chicken Zurich Style" — Zuerigschnetzlets, in the Swiss dialect of German — with hash browns and beans, and apparently "Zurich Style" means microwaved and drenched in bland sauce.

Served with metal flatware, the chicken was about what you'd expect from the frozen foods aisle, and covered in a tan sauce with mushrooms. Two potato cakes were heated very unevenly — chunky on the outside, mealy toward the center — and about a dozen green beans were overcooked and very salty. Joining the party were a wrapped slab of Swiss cheese and a piece of orange cake which managed to be both damp and dry. This all came with a good and fresh-seeming roll with a butter pat, plus a serving of salad dressing despite the lack of salad.

While this was not an awful meal, it was not good, and much of it was left on the tray which was cleared 30 minutes later. Lights dimmed within the hour but food and drink options remained available. Oranges, candy, tarts and soft drinks (three brands of bottled water!) remained within easy grasp in the galleys and were later joined by sandwiches.

I also spotted asparagus soup packets, but no spoons or hot water. A flight attendant was happy to get them for me when I asked, and I was happy to have the soup — more flights through cold weather should offer this. Four hours after dinner had been cleared, a serving of Mövenpick ice cream arrived. I would have liked it sooner and colder, but free ice cream is free ice cream.

Flight attendants came by often with beverages, and about five hours after the ice cream came a snack of hand-held pizza and cookie. It was pretty bad — dry and chewy and not hot.

An hour before landing, I awoke to a wrapped Swiss chocolate. This, on the other hand, was perfect.

At 4:22 local time, all the cabin lights came on and we touched down at 4:41, or 21 minutes later than scheduled. Eight minutes later, doors opened at the gate. There was no line for the Global Entry kiosks and I was at the baggage claim by 5:05. My bag was the first onto the carousel at 5:12.

Overall Impression With a new aircraft, attentive staff and plentiful snacks, this was a very good flight. And it would take only a little extra to make it great: In-seat power, better communication back at the airport, better Wi-Fi and (as with most flights in economy) better food.But a very good flight for a very good price makes this overall experience great. I look forward to the next time I'm heading on Swiss zum Gate.All photos by the author.