7 Aviation-Themed Restaurants Around the USA

Articles
Lori Zaino is a writer for TPG and TPG UK covering travel, news, points and miles and more. She's been based in Madrid, Spain almost 15 years and is an expert in travel throughout destinations such as Europe, Southeast Asia and Africa.
Follow
Jan. 14, 2018
•
8 min read 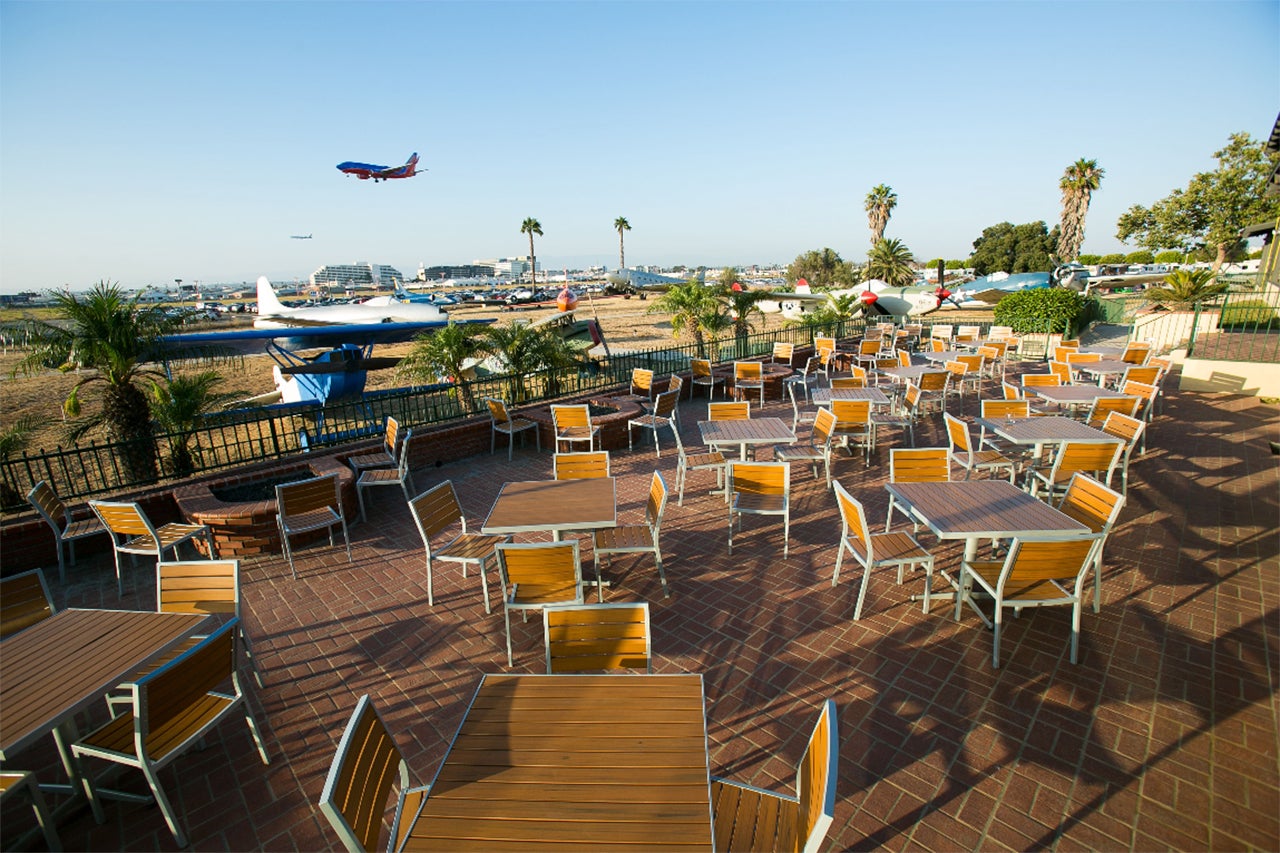 It's no secret that many of us TPG readers and staff members are plane obsessed. But don't worry, being an aviation nerd is very mainstream these days -- you can follow fellow #AVGeeks on Instagram, download a variety of #AVGeek apps and Brussels Airlines even had an #AVGeek party to send a final farewell to the Avro RJ100 aircraft.

Now you can can combine your love of food and flying all in one -- and I don't just mean by maximizing airline and credit card dining programs. Here's a list of some of the best aviation-themed restaurants around the United States so that all us #AVGeeks out there can take our aircraft obsessions (and our appetites) to the next level.

The Gist: Freshly renovated and reopened in June, Proud Bird is actually a 'food bazaar' — a large, food court-style restaurant that features several different counters serving everything from Asian to Italian to American cuisines. The design is airy and open, similar to an airport hangar. The floor-to-ceiling windows even have panoramic of LAX's runways. The bar — named the 'Mile High Club' — has 13 beers on tap and a variety of cocktails and wines available so you can sip as you swoon over planes landing and taking off, all while admiring the replica aircrafts and memorabilia scattered throughout. And in typical TPG manner, don't forget to join the Loyalty Club, where you'll earn one point per dollar spent towards free dining. Average price: $10-35 per person.

The Gist: Does a half-price burger in the control tower lounge sound like a plan? That's one of the Monday night specials at the Hangar One Steakhouse in Wichita, Kansas. The menu is all-American — think soups, salads, burgers, pasta and of course steak — and a lot more fun to eat on the crash pad patio, the outdoor area part of the aviation-themed diner, or underneath plane figurines in the control tower lounge. The steakhouse also hosts special aviation and cuisine-themed dining nights, like a "Wine Flight Dinner" and the "Tour de Hangar" bike and food event. The restaurant even has their very own bottles of Cabernet Sauvignon Hangar One wine for sale, which you can pick up after your meal to give to your favorite aviation enthusiast. Average price: $15-50 per person.

The Gist: Conveniently located next to the Wings of Honor aviation museum and the Walnut Ridge Regional Airport (ARG), this 737 Southwest airplane-turned-restaurant is a family-friendly joint serving up home-cooked food. It may be the only chance you get to have a catfish buffet on a 737, anyway. After you enjoy your meal, you can get that perfect Instagram shot of you sitting in the cockpit of a plane, or you can wander around the runway and check out some of the planes no longer in use. Oh, and don't worry if the economy plane seats don't have a lot of wiggle room for your coats and personal belongings because you can store your items in the overhead bins. Average price: $10-25 per person.

The Gist: Although the French chateau setting may not immediately conjure up visions of all things aviation, the 100th Bomb Group restaurant is actually located right next to the Cleveland Hopkins International Airport (CLE) with expansive views overlooking the runways. The place to dine is the Observation Deck (especially on a warm, sunny afternoon), voted one of the top 10 patios in Cleveland by The Weekender. The restaurant also has gift cards for purchase, which make for ideal stocking stuffers for your Ohio-based, aircraft-obsessed loved ones. Even better, the restaurant's loyalty program is connected to Proud Bird's, so you can earn and use points at both spots. Average menu price: $12-45 per person.

The Gist: This diner tucked away in the town of Ypsilanti, Michigan dates back to 1936 and is dedicated to the B-24 bombers that were made at the nearby Willow Run plant during World War II. You can enjoy your bacon and eggs while admiring all the bomber decor, like planes dangling from the ceiling, framed WWII photos, military jackets, advertisements and other memorabilia strung up around the restaurant. It's no wonder the restaurant has been featured on the Food Network's "Top Five Over Indulgences," as the hearty breakfast includes four eggs, one pound of potatoes and one pound of meat. Average price: $5-15 per person.

The Gist: This kitschy 1950s diner is located right next to the Manchester-Boston Regional Airport (MHT) and serves up classic diner items like milkshakes, fries, burgers and omelettes for breakfast, lunch and dinner. You can also plan a special event in their Hangar One room. With a tagline like "Good Food on the Fly," you just can't help but want to chow down on a juicy burger or hearty plate of pancakes post or pre-flight. Plus, it's next to to the Holiday Inn Manchester Airport, so you can put those IHG points to good use by spending a night there. Room rates start at $125 or 25,000 IHG Reward points. Average price: $10-20 per person.

The Gist: The third in the trifecta of Proud Bird aviation restaurants, 100th Bomber, 94th Aero Squadron (just another way to earn and burn those loyalty program points) is located in a French chateau in Van Nuys, California. The spot serves up American cuisine, complete with a two-story patio and three banquet rooms for special events. The restaurant pays homage to those who have served the USA. In fact, the name 94th Aero Squadron was actually a real unit of the Air Service for the US army dating back to 1917. The restaurant and surrounding grounds are covered in aircraft replicas and memorabilia from the past 100 years. Average price: $15-40 per person.