The Amazing Story of the Boeing 747 in 12 Photos

Articles
Alberto Riva Alberto runs our flight reviews and oversees special projects across several verticals. Previously, he was the managing editor of Vice News and worked at Bloomberg and CNN, where he was constantly trying to convince people to do more stories about airplanes. He speaks Italian, French and Spanish and one day he’ll be better at German.
Follow
Dec. 20, 2017
•
9 min read 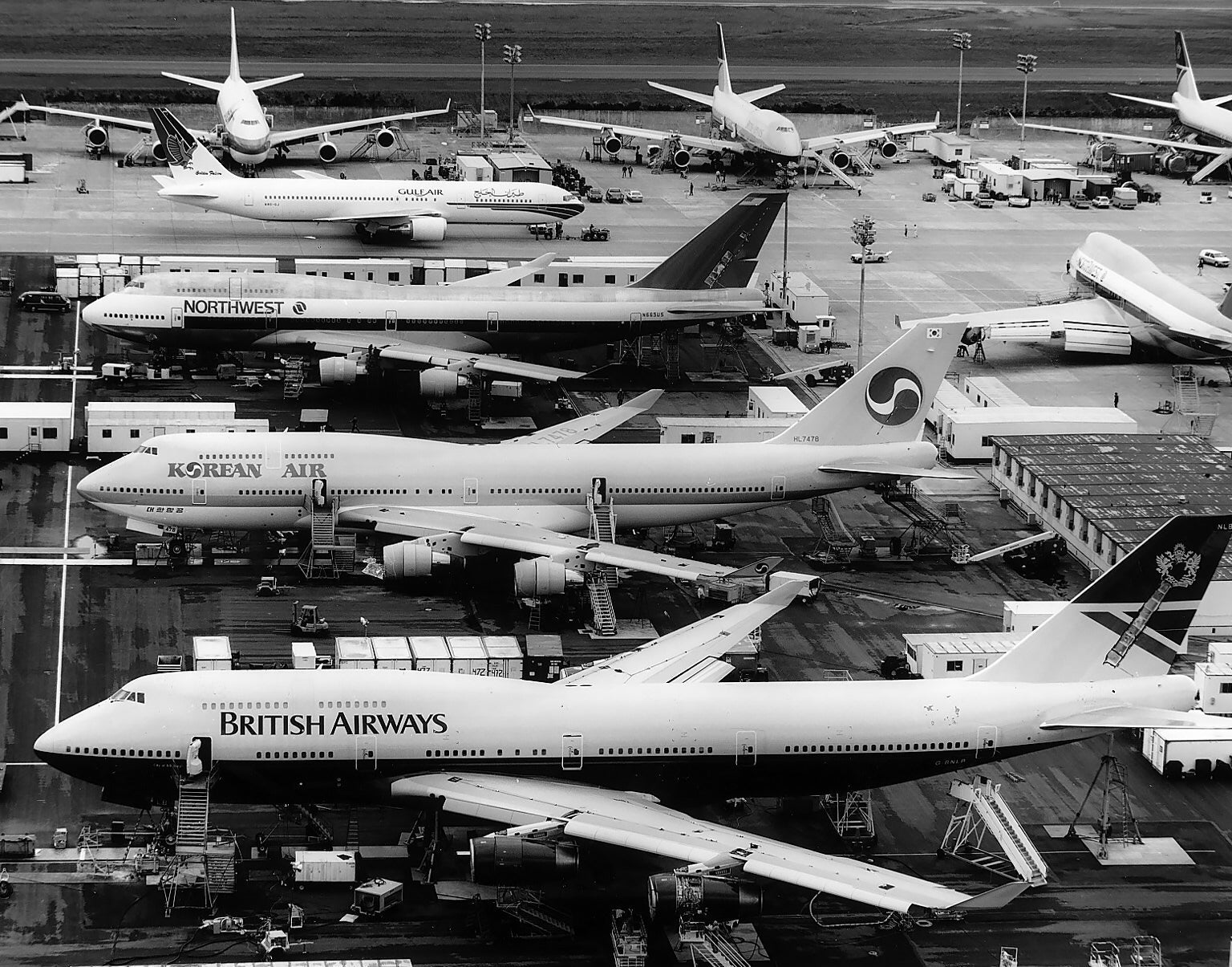 The Amazing Story of the Boeing 747 in 12 Photos
This post contains references to products from one or more of our advertisers. We may receive compensation when you click on links to those products. Terms apply to the offers listed on this page. For an explanation of our Advertising Policy, visit this page.

With the retirement of the last 747 in regular passenger service by a major US airline, the era of big four-engined, twin-aisle passenger jetliners in America comes to a close. While the Jumbo Jet still flies elsewhere and will still be found at US airports in the colors of airlines from overseas, or of domestic cargo operators, it's gone as a passenger transport in the country that built it.

It's the end of a 48-year history that began on February 9, 1969, with the first flight of the first 747 built. The huge airplane awed the world with its immense size when it was first rolled out of the factory in Everett, Washington, on September 30, 1968 — check out the tiny Boeing employees, airline officials and journalists who had assembled to look at the 231-foot behemoth on that historic day. The logos of the 26 airlines that had ordered the giant adorned the fuselage.

747s are still assembled at the same plant, although today's Jumbos look different. They are bigger and heavier, carry more people farther, and employ a lot of digital technologies that were unimagined in 1968. Just compare what a 747 flight deck looked like in the '70s, with a dizzying amount of gauges and dials, as can be seen on this early Air Canada 747 series 100...

At the time of the aircraft's debut — Pan American made the first commercial flight on a 747 on January 22, 1970, from New York to London — the press was fairly obsessed about its size. Nothing in the sky then could carry 400 people. The standard long-haul airliner of the age, the 707, carried less than half, with six abreast in coach class arranged 3-3. Then came the Jumbo, with a 3-4-3 coach and an upper deck. Airports had to learn how to handle the beast. When the first 747 in Pan Am colors came out of the factory in 1969, Boeing arranged a side by side shot with a 707 to show just how staggering the differences were:

Early customers of the big bird were enthusiastic to take delivery of their first 747. In the 1970s, the Jumbo Jet was also a statement of prestige: you weren't a serious airline unless you flew the 747. When Lufthansa got the first of many Jumbos to follow, in 1970, dignitaries marked the delivery with speeches. It was, in a way, a worldwide announcement that the flag carrier of postwar Germany had joined the big leagues — where, in no small part thanks to the 747, it has been since.

And, speaking of prestige, New York's JFK airport soon became the world capital of Jumbo Jets, with dozens of airlines sending their 747s on what was, and still is, their most important route. This early 747-100 from British Airways is seen here at JFK in 1978 with two BA stablemates, a Concorde to its right and a Vickers Super VC-10 to the left.

The 747 hasn't carried just passengers in its long career. Besides all-cargo versions, command post airplanes for the US Air Force and even a prototype interceptor that would have shot laser beams at incoming missiles, the Jumbo had a unique job beginning in the 1970s: It carried on its back the Space Shuttle. The Shuttle landed like a regular aircraft but could not take off unassisted, so it needed to get a ride on a real airplane to move between NASA facilities. Two 747s were converted for the job, which turned the combined Jumbo / Shuttle hybrid into one of the weirdest flying machines ever seen. Below is Endeavour, touching down at Edwards Air Force Base in California in 2012.

The shuttle-carrying 747s suffered serious performance penalties — when carrying the Orbiter they could fly only 20% as far, much slower and less than half as high as the regular 747s they used to be. Without a massive spaceship on its back, though, the 747 is the fastest passenger jet in service today, and when given the chance it can dazzle airshow crowds, with surprising agility for something that can weigh more than 880,000 pounds with the maximum load of passengers, cargo and fuel. Here's a 747-400, a much-modernized version introduced in 1989, doing a low-level banking pass at the 2015 Australian Formula One Grand Prix in Melbourne. This is not what the 747 carrying you from JFK to Heathrow would ever do, of course — not with passengers on board. But it easily could.

A famous place to see Jumbos doing breathtaking maneuvers was Hong Kong's old airport, Kai Tak, known by pilots and passengers for its very challenging approach over the city. The last turn to align with the runway was low over a densely packed neighborhood, often in tough weather. The 747, a docile and responsive flyer with plenty of power from its four engines, never let pilots down on the Kai Tak approach. Here's a British Airways -200 model on that last turn over Prince Edward Road in the 1990s.

747s in those days looked different on the inside, too. This was first class on the upper deck of a Lufthansa 747-400 in 1989. It wouldn't be even a middling business class today — the seats don't lie flat, there is no privacy or direct aisle access for all seats, and in-flight entertainment was a movie screen for the whole cabin.

20 years later, that first class on the upper deck of the Lufthansa -400s had turned into something far swankier: Each seat had its own bed. That's right, the seat didn't turn into a bed, the seat had a bed beside it. That unique arrangement is gone, in case you were wondering how many points and miles it would cost you to fly it.

Lufthansa has taken first class out of its 747-400s altogether in favor of more business class seats. It still keeps first on its 747-8i model, the newest variant of the airplane and the biggest, with an upper deck stretched even more than on the -400 and a longer fuselage — but the same four big engines. And that's exactly why the 747 is becoming a rare bird: It needs four turbofans to do what its slightly smaller cousin, the 777, does with just two. Even with fuel as relatively cheap as it is today, airlines have realized they don't need the Jumbo Jet anymore. And in the future, majestic sights like the first 747-8i taking off on its maiden flight in 2011 will become even rarer.