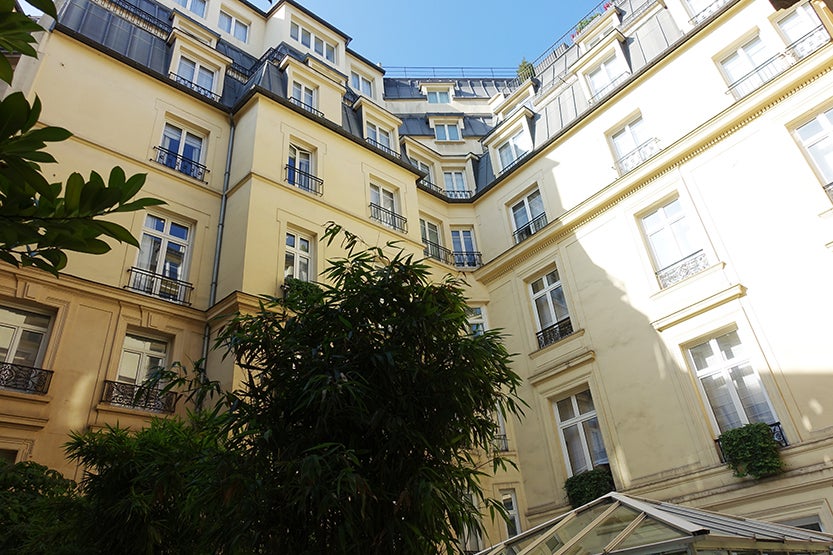 I was excited for my first trip to Paris, and had heard great things about the Hyatt Paris Madeleine from a coworker at The Points Guy. It’s in a great but quiet neighborhood, and is a top-tier Hyatt hotel, so I decided it would be the perfect venue for my first trip to the City of Light.

The Hyatt Paris Madeleine was a Category 6 hotel requiring 25,000 points per night for a queen room. Since there were two of us staying for three nights, I opted to pay for a deluxe king, which was unavailable on points. The standard rate for a deluxe king room was 670 euros ($775). It was expensive, but I was traveling during peak travel season. There was an advance-purchase rate of 582 euros per night. The hotel required full prepayment, and the fare was completely non-refundable and no date changes were allowed.

I booked using my Chase Sapphire Reserve so I could earn 3x points. For longer travel itineraries, the Citi Prestige card would have been an excellent choice, as it gives a fourth night free, which in this case would’ve given me a whopping $775 dollars in value in one hotel stay. For this stay, I also earned 12,934 Hyatt points.

The Hyatt Paris Madeleine was about a 15-minute ride from the Gare du Nord train station. It was in the Eighth Arrondissement on a busy street in the Madeleine neighborhood. It was easy to find once we got there, and was not far from the Champs-Elysées and the iconic Arc de Triomphe. Both are must-visits for a first-timer in Paris and were only about a 20-minute walk from the hotel. The Eiffel Tower and the Louvre were each a 10-minute drive from the hotel, and some of the best shopping in Paris, the Printemps Haussmann and the Galeries Lafayette, were a short walk from the hotel. The exterior of the hotel was beautiful and felt like quintessential Paris.

The large revolving door opened right into the lobby of the hotel.

We were greeted by the welcoming staff, who immediately offered to relieve us of our heavy bags. That, plus the fact that the hotel only had 86 guest rooms, immediately made me feel like I was getting the best benefits of a boutique hotel. We arrived around 10:00am, so the room wasn’t quite ready, as the hotel had been fully booked the previous night. The fresh flowers were a pleasant touch.

The lobby was truly stunning. The couches were incredibly comfortable, the decor was chic, and the glass ceiling let in so much natural light that it brightened the morning. Many of the guest rooms had a view overlooking over this skylight.

The decor was swanky and upscale. The lobby centered around this jaguar.

When we were notified our room was ready, we found out the staff had already taken our bags up to the room. Someone escorted us up to the room and showed us everything.

Room 112 was the biggest of the deluxe king rooms. The room had a king bed and a couch that could pull out to a sleeper bed. The room employed a neutral color scheme with lots of whites, tans and brown, and had what I’d call French flair. There was also tons of natural light from the large windows.

The bed was comfortable, and the pillows were fluffy. There was a reading lamp on each side of the bed.

The couch had seating for at least three. The sitting area also included a little table and a chair.

Our room had two windows with blackout drapes that were closed at night. It looked out onto the street, but I think we would’ve preferred a view of the inside of the hotel and the glass ceiling.

The nightstand had adapters that allowed us to plug US plugs directly into the wall. Our room had an iHome for an iPhone 5, which at this point was outdated.

The bathroom was the least impressive part of our room. It was on the smaller side and only had one sink. The shower had great pressure but was small. For a five-star hotel, the bathrooms could use an upgrade. The vanity left little room to store toiletries.

There was a soaking tub right next to the sink. We ended up storing toiletries alongside the tub, since there was little room on the vanity.

The amenities were the Portico brand.

The shower was on the smaller side, but the pressure was strong. The water temperature was always hot.

The toilet was separated from the shower and bathroom by a glass door. Even though the bathroom was small, the toilet had privacy.

The closet was spacious, with room for a large bag, but seemed a little beaten up. There was one robe hanging in the closet and another one in the bathroom. There were extra pillows and an extra comforter in the closet, along with a few hangers.

The minibar had a variety of drinks and snacks, but the prices were steep. There was also an espresso machine for guests to use free of charge. Right under the minibar was a small drawer that contained a safe. This was a great place for the safe, as I would’ve never thought to look there.

All in all, the room was spacious and comfortable.

The hotel restaurant, Café M, was in the lobby. We were told the restaurant was closed on Sunday nights but that they still served dinner in the lobby, which was comfortable and homey. We had light bites and drinks before our night out. The drinks were amazing, and even though we dined in the lobby, the menu was the same as the restaurant.

The homemade foie gras terrine with rhubarb marmalade and rosemary crumble was a highlight.

You can never go wrong with burrata. Spread on top of Cafe M bread, it was delicious.

We had cheese plates everywhere we went in France. The bleu cheese from Cafe M was among the best I'd ever had.

The fried shrimp was so good that we ordered a second plate.

We loved the couches we dined on, which gave our meal more of a lounge feel than a traditional restaurant.

Since I did not have the chance to dine in the restaurant, I decided to give the breakfast buffet a try the next morning. I did not opt for the rate that included breakfast, so the buffet cost 36 euros (about $42). The restaurant was small, but the buffet was not crowded.

The buffet had tons of options, including breads, yogurts, cheeses, meats, fruits and cereals.

Here's a look at the fruit, cheese and cereal selections.

The gym could have used an upgrade: It was small with few machines.

While there was a nice assortment of free weights, the best parts were the sauna and the steam room.

I thoroughly enjoyed my stay at this hotel. The staff was welcoming, the fresh flowers in the lobby were replaced every other day, and the hotel was clean, quiet and comfortable. Although the bathrooms were small, the room was spacious. If you are looking for a luxury option with a boutique feel, then the Hyatt Paris Madeleine is a great option.

Have you ever stayed at the Hyatt Paris Madeleine? Tell us about your experience, below.