Articles
Mike Arnot is the founder of Boarding Pass NYC, a New York-based travel brand and a marketing consultant to airlines. A private pilot, he can sometimes be found above the skies of New York City.
Follow
Nov. 07, 2017
•
8 min read 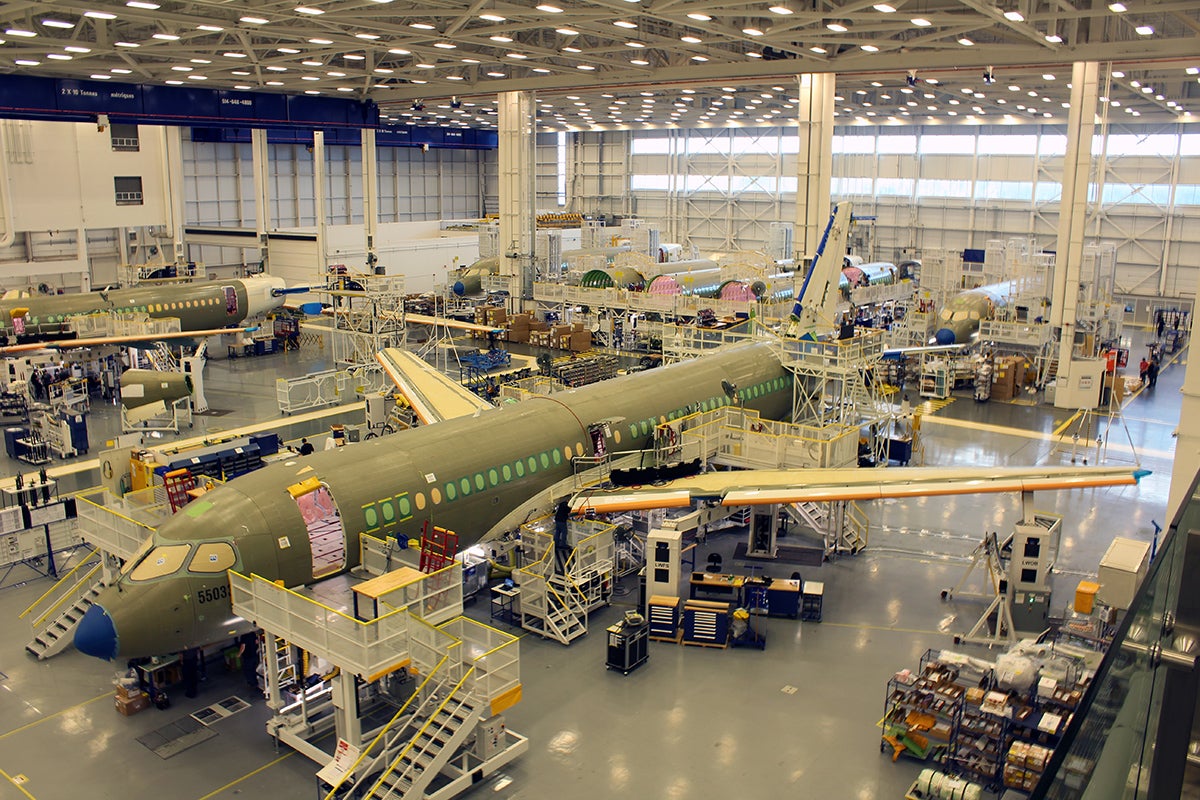 Dear Delta Flyers: You'll Love the New Bombardier C Series
This post contains references to products from one or more of our advertisers. We may receive compensation when you click on links to those products. Terms apply to the offers listed on this page. For an explanation of our Advertising Policy, visit this page.

Delta passengers are in for a treat. The airline begins taking delivery of shiny new Bombardier C Series aircraft in 2018, if all goes according to plan. Delta has an order for 75 CS 100 aircraft with options for more, and they're the first (and so far only) airline in the US to have bought the Canadian jet.

The C Series is a single-aisle airplane that seats 100+ passengers, a Goldilocks solution between smaller 50-75 seat regional jets and larger 150-seat Boeing 737 or A320 aircraft. There are two variants, the CS 100 and the slightly larger CS 300, in a 2-3 configuration in economy, and 2-2 in business / first class for airlines that opt to install a separate premium cabin. They can seat up to 145.

Bombardier calls their C Series “a widebody feel in a single-aisle aircraft”.

That's a spot on description.

Last week, I toured the Bombardier plant in Montreal, where new planes are coming off the line at the rate of one every 10 days. This pace will increase to an aircraft every two days — around 100 per year. Bombardier has built an impressive facility, bringing in composite wings from Ireland (the first composite wings on a single-aisle aircraft), metal fuselage from China, and horizontal and vertical stabilizers from Italy, among other suppliers. The plane is currently in service with Swiss and airBaltic, and later this fall it will begin flying with Korean. Shiny blue Korean planes were prepped to roll out of the Montreal plant, minus Pratt & Whitney engines, which are delayed because of issues with the new "geared fan" technology that enables the jet's remarkable fuel efficiency. Korean pilots are in training in Montreal now. The inside aesthetic of the Korean aircraft is a secret, and none of the spokespeople on my visit had been allowed to even peek inside.

“We designed this plane around the pilots and passengers. A lot of our competitors say they do, but we actually did it,” said Antonio Ficca, Direct of Product Marketing for the C Series.

Here are some reasons why Delta passengers are in for a nice ride.

Flight attendants regularly warn me to watch my head when I board. By necessity I always do — I’m 6’5”. Most current regional jets boast an underwhelming 6’6” cabin height, be they Embraer or Bombardier. (Indeed, I flew to Montreal on an Air Canada Embraer E190, and folded myself aboard.)

The first thing I noticed about the C Series when I entered was the spacious cabin. The C Series boasts 6’11” of cabin height. In comparison, a 737 cabin is a touch higher than 7 feet, and the A320 is 7’4”. The C Series comes closer to its larger cousins, and that extra room makes a big difference. The plane has an airy feel.

While airlines and manufacturers trumpet seat width and pitch, there's more to comfort when you're sitting five abreast. If you've ever flown the Boeing 787, you'll know that the window seat is not crammed up against the aircraft wall — there's a gap. The same goes for the C Series. Ficca said that this so-called "clean sheet" design is such that the passenger cabin is an oval, with significant shoulder room between the window itself and the window seat.

“Our passengers especially point out the bright and spacious cabin design,” said Sonja Ptassek, a spokesperson for Swiss.

Seats Made For Longer Journeys

This is a roomy plane. The seats are not bulky, and boast an industry-leading single-aisle middle seat at 19” wide. The aisle and window seats are 18.5”. Plus, the aisle itself is 20”, the same as a Boeing 737, which is 6-abreast.

“In post-flight interviews, Swiss passengers expressed that they felt the seats had more pitch. And yet, the pitch is the same,” said Ficca, noting that Swiss typically flies with 30 inches of pitch.

A feature that I liked was the ergonomically designed seat backs, which are carved out for more knee space. Score one for the taller among us.

No Gate Check Required: A Victory for Passengers

Have you ever waltzed up to the gate after relaxing in the lounge, only to be forced to gate check your roller bag? Not so for the C Series. Bombardier designed the plane so that every passenger can bring aboard an IATA-standard 22” roller bag. It might be a full flight but there may still be room for your Away suitcase. And the bins lower down, unlike most single-aisle planes on offer. “Think of a mom traveling with children. A lower bin is a nice feature,” Ficca said. These large bins descend around 5 inches lower than the typical bin. The current designs are always perfectly positioned to catch my head or poke me in the eye.

What Routes will Delta Fly? Long, Thin Ones

Austin to LaGuardia (LGA), Los Angeles (LAX) to Montreal (YUL), Atlanta (ATL) to Seattle (SEA): these are some routes that passengers would prefer to fly direct, but there’s generally not enough demand to justify a larger aircraft, or there may be other restrictions such as runway length. This is the sweet spot for the C Series. These so-called “long, thin” routes allow Delta to maximize revenue and meet the passenger demand with the right equipment, which needs long range without too many seats.

Delta declined to comment on specific routes for regulatory reasons (and presumably competitive reasons as well), indicating only that the airline will fly "short- to medium-haul routes". Delta's President Glen Hauenstein said that New York would be the first base for the C Series in the Delta second-quarter earnings call, but coyly declined to say which New York airport would get lucky.

Might we see London City Airport (LCY) to JFK in the future? Delta flyers can only dream. The CS100 has a range with a maximum payload of 3,500 miles, in theory enough to go nonstop between the two, which British Airways covers today with an Airbus A318. (On the flight from LCY, the Airbus needs a fuel stop because it cannot take off with a full load of gas from the short LCY runway, but the CS might make it.)

The Elephant in the Room

October has been an interesting month for the Bombardier jet. First, the US Commerce Department slapped duties of 300% on imported C Series aircraft, which would scuttle any US sales, if they were to be confirmed. Later in the month, Airbus bought 50.1% of the C Series program, and together with Bombardier announced plans to build a C Series plant in Mobile, Alabama, which might skirt those import tariffs. How this will affect delivery of the C Series is unknown, but Bombardier and Delta appear to be proceeding apace. Delta has been involved in training on the C Series for 18 months in Montreal.

When the aircraft eventually do become integrated into the fleet, your options for direct flights on Delta will increase significantly. And compared to the options you have today on regional jets, you’ll fly in great comfort, too.

An earlier version of this story stated that the plane is configured 2-3 in first/business class. That was a typo, as the correct configuration is 2-2. The story has been corrected.