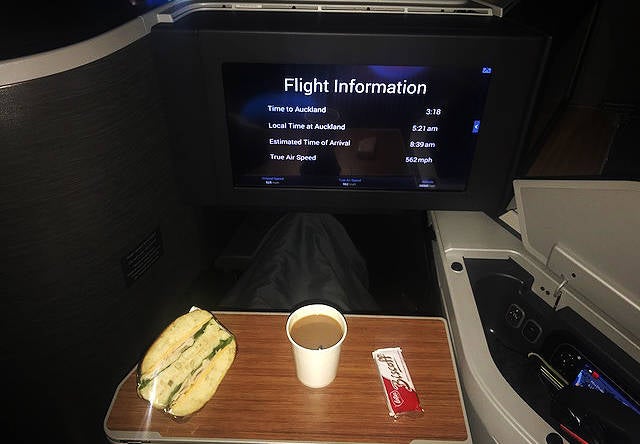 American Airlines Business Class Meal to Auckland: Sandwiches and Sodas
This post contains references to products from one or more of our advertisers. We may receive compensation when you click on links to those products. Terms apply to the offers listed on this page. For an explanation of our Advertising Policy, visit this page.

After we published that initial story, a TPG reader emailed us about his and his wife's experience on one of those flights without catering — and that experience was terrible, even for those in business class on one of American Airlines' 13+ hour flights over the Pacific. To add insult to injury, American Airlines' after-the-fact compensation offer has been slow in coming, and arguably insufficient.

Reader Daniel and his wife booked an American Airlines business class AAnytime award (175,000 miles one-way each) from Miami (MIA) to Auckland, New Zealand (AKL) to celebrate their 10-year anniversary. Unfortunately for them, this trip took them through LAX on Wednesday — the day that American Airlines decided to pull the plug on Gate Gourmet catering.

Daniel reports that he got a call before he left MIA about the situation:

AA called me a few hours before the MIA flight to let me know that the caterer they used was fired and they won’t have first class meals but not to worry, I was going to be served economy meals. It was disappointing but it’s better than nothing.

Well, it wasn't much better than nothing. As it turns out, no hot meals would make their way onboard. Meals were supposed to be flown in from Dallas/Fort Worth (DFW), but Daniel was told that those meals ended up on the wrong flight out of LAX. So, "the final decision they made was to send crew to buy as many sandwiches as possible at the terminal."

Instead of at least going through the motions to serve these to the business class passengers, flight attendants set up a buffet in the galley from which passengers could serve themselves.

In addition to missing meals, Daniel and his wife also didn't receive:

Although Daniel doesn't mention it, he and his wife probably didn't get a great meal in LAX during their 5.5 hour layover. The American Airlines Terminal 4 Admirals Club lounge is closed, and they just missed the upcoming LAX Flagship Lounge that's supposed to open by the end of 2017.

So, what is American Airlines doing to make up for this? Daniel asked the first agent who called about the situation what compensation they would receive. This agent said "that she is only calling to letting me know [about the situation] and that I will get another call from AA for compensation."

When Daniel first contacted The Points Guy, that call still hadn't come. Although the flight attendants were "exceptional and very apologetic," no compensation was provided onboard, and Daniel reported that American Airlines still hadn't contacted him about the situation.

We reached out to The Points Guy contacts at American Airlines. A spokesperson assured us that the airline is "following up with customers in the form of a voucher proactively" and that the airline will check on this case. AA wouldn't disclose the amount that would be offered to Daniel and his wife, noting that the "voucher amount will vary on the flight."

Now, Daniel has reported back that the voucher has come. What's AA's offer for failing to provide hot food, alcohol and an amenity kit for a 13+ hour flight in business class on an AAnytime award? $100 each.

American Airlines may have been a little rash to halt Gate Gourmet catering. Reports indicate that AA was the only airline that uses Gate Gourmet in LAX to suspend its catering. A "half dozen other carriers continued to take food deliveries from the kitchen" as the listeria wasn't found on food preparation surfaces. American Airlines defends its decision as being "out of an abundance of caution."

Regardless, service failures are inevitable. What's telling about an airline is how they handle these failures. American Airlines scores points for calling ahead of the flight to alert Daniel about the situation, but the airline has utterly failed since. Daniel wasn't immediately contacted by American Airlines — even though the airline says that it's proactively reaching out. And the airline's compensation offer of $100 each is downright insulting.

Update 11/4 4:02pm: American Airlines has re-connected with Daniel to apologize and explain the LAX catering situation. The agent confirmed that the amenity kits and the alcohol are also provided by the catering company, which is why these were missing as well. The standard catering compensation has been increased to $200 per business class passenger. However, since Daniel and his wife had an especially poor experience, American Airlines is giving them a $300 voucher each.

What do you think the proper compensation should be for this flight?

All images unless otherwise noted are by TPG reader Daniel N.

Our points-obsessed staff uses a plethora of credit cards on a daily basis. If anyone on our team wouldn’t recommend it to a friend or a family member, we wouldn’t recommend it on The Points Guy either. Our opinions are our own, and have not been reviewed, approved, or endorsed by our advertising partners.
See all best card offers
Related stories
Deals
Fly premium economy to Istanbul starting under $1,000
News
Now live: Chase Freedom cardholders can earn 5% back on PayPal and Walmart purchases this quarter
News
Hurricane Ian: Airlines join relief efforts, offer bonus miles to customers who donate
Guide
Marriott Bonvoy Bountiful credit card review: Solid sign-up bonus with limited perks