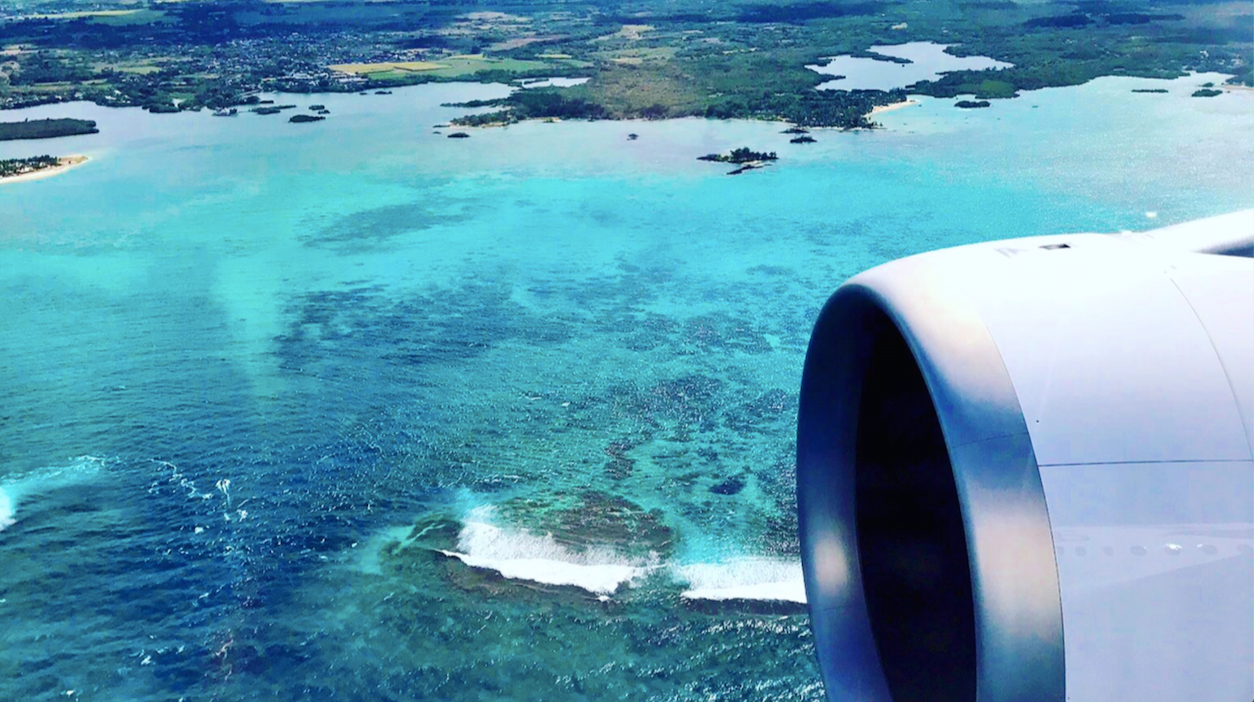 When a Prime Minister and Entire Nation Welcome the Delivery of an A350
This post contains references to products from one or more of our advertisers. We may receive compensation when you click on links to those products. Terms apply to the offers listed on this page. For an explanation of our Advertising Policy, visit this page.

The delivery of a new, gleaming airplane to a customer is a daily occurrence — more than daily, in fact. Airbus delivered 688 aircraft last year and Boeing delivered 748, two per day on average, and that's not counting the other, smaller planemakers. Long gone are the days when jets were unusual machines few people had been on. So it was a big surprise when I went on the delivery flight of the first Airbus A350 for Air Mauritius, and discovered that not only it wasn't a run of the mill event — it was the biggest story in the nation, with the Prime Minister himself turning up for the plane's arrival and the media out in force.

Turns out, the country's flag carrier airline is a source of great pride for the nation of 1.26 million in the Indian Ocean. I could tell by the number of people who showed up at the Port Louis (MRU) airport — or by the extensive coverage in the media, even alerting people when the new A350 was going to fly overhead on the delivery flight. That's right, the airline had the delivery flight overfly Mauritius at low altitude, to show off its new flagship.

The adventure began last Thursday when I joined Airbus on the delivery of the first of six A350-900 XWB to Air Mauritius. The 50-year old airline flies to 23 destinations in Europe, including London (LHR) and Paris (CDG), as well as destinations in Asia, Africa, Australia, and around the southwest Indian Ocean region. It also has two Airbus A330neos on order, meaning it'll soon operate some of the world's newest aircraft.

The delivery flight from Toulouse, France, to MRU was around 11 hours, including that low-altitude tour of the island, in order to "let the locals know we had arrived," as a member of the flight crew told me. Here's what Business Class looks like on this new A350. Arranged in a 1-2-1 configuration, meaning direct aisle access for all, it features the new Stelia Solstys III seat, installed for the first time on an A350.

It has a seat width of 23 inches and converts into a fully flat 76 inch bed.

Economy Class is arranged in a 3-3-3 configuration.

Each seat has a width of 18 inches, and a seat pitch of 32 inches. But on a delivery flight where you get to buzz the mountains of a tropical island and have the nation's leader in person welcome you on the red carpet, that matters less than the scenery.

As we descended along the coast to let the people of the city of Grand-Baie have a good look at the plane, we began a circuitous route around the island, as you can see in the Flightradar24 screenshot below.

Check out the view in the video below:

We then headed inland, flying low around the Pouce, Pieter Both, and Piton de la Petite Rivière Noire mountains. During this part of the flight, we maintained an altitude of around 1,000 to 1,400ft, passing by mountains over 1,000ft higher than us.

Our flight crew informed us we would be flying past the Morne Brabant mountain, a scenic and historically very significant location. It was used as a refuge by runaway slaves until the abolition of slavery in Mauritius in 1835 — but when police made their way to the remote location to announce the end of slavery, people mistook it for a recapture attempt and jumped to their death from the mountain. Those events, and the place, are so important in Mauritian history that our aircraft was itself named Le Morne Brabant.

Here's close up of our fly-by past the Le Morne Brabant mountain.

And here's the mountain in full, once we had flown past...

Our flight gave us amazing views of the white sand beaches.

At this point, we started making our approach towards Mauritius Airport (MRU.)

Our landing at MRU was very firm — which is fairly normal on delivery flights, as the flight crew tend not to have grasped yet the exact "feel" of the aircraft. It was firm enough, in fact, to release a pair of oxygen masks, which again, I've experienced on a delivery flight before.

We then got a sense of how important our arrival was when we got not only the traditional water-cannon salute from the airport fire brigade, but an actual red carpet.

Once doors were opened, we were welcomed by Prime Minister Pravind Jugnauth, the CEO of Air Mauritius Somaskaran Appavou, government officials, employees of airline and airport teams, local business leaders, and guests. Everyone was keen to get a glimpse of the new bird.

Prime Minister Jugnauth explained during a welcome ceremony that the A350 arrival marked "the beginning for the future" of Mauritius — the nation itself, not just the airline!

The delivery of the A350 comes at a complicated time for Air Mauritius, which has faced a pilot revolt a few weeks ago, when a dozen pilots went on an unofficial strike by calling in sick at the same time, grounding many international flights. They claim they are working too hard and suffer from pilot fatigue, a major problem the aviation industry faces today. The government intervened at the highest level, and in this light, it may not be surprising that the Prime Minister's speech focused on how the A350 shows a "fresh start" and how it's important for the country to "work together to prosper, and utilize the new planes to establish Mauritius as a hub in the Indian Ocean."

At a ceremony just under the wings on the new plane, the Prime Minister was presented with a painting showing Le Mont Brabant mountain.

The festivities started soon after, with typical Mauritian music and dancing.

The aircraft wears a special livery celebrating the 50th anniversary of the airline, which combines with a minor rebranding, including new crew uniforms.

This was an amazing welcome by Mauritians, who are clearly very, very excited about their first A350. The delivery of the new aircraft marks way more than just another plane, and the general feeling around the island is that the delivery of this new aircraft opens up a new chapter for Mauritius. The island relies heavily on tourism, and the world's most modern long-range jet is clearly seen as a major factor attracting tourists. It's equipped with a great business class product, and a comfortable economy class, with adequate legroom.

When I spoke to locals, they said they felt very emotional looking up and seeing the A350 flying around the island. One Mauritian grandmother told me it's something she'll never forget, and that she had seen the first Air Mauritius plane arrive, 50 years ago. It's certainly a memorable time for the airline.