Articles
Emily McNutt is The Points Guy's Global News Editor and is based in London.
Follow
Oct. 30, 2017
•
6 min read 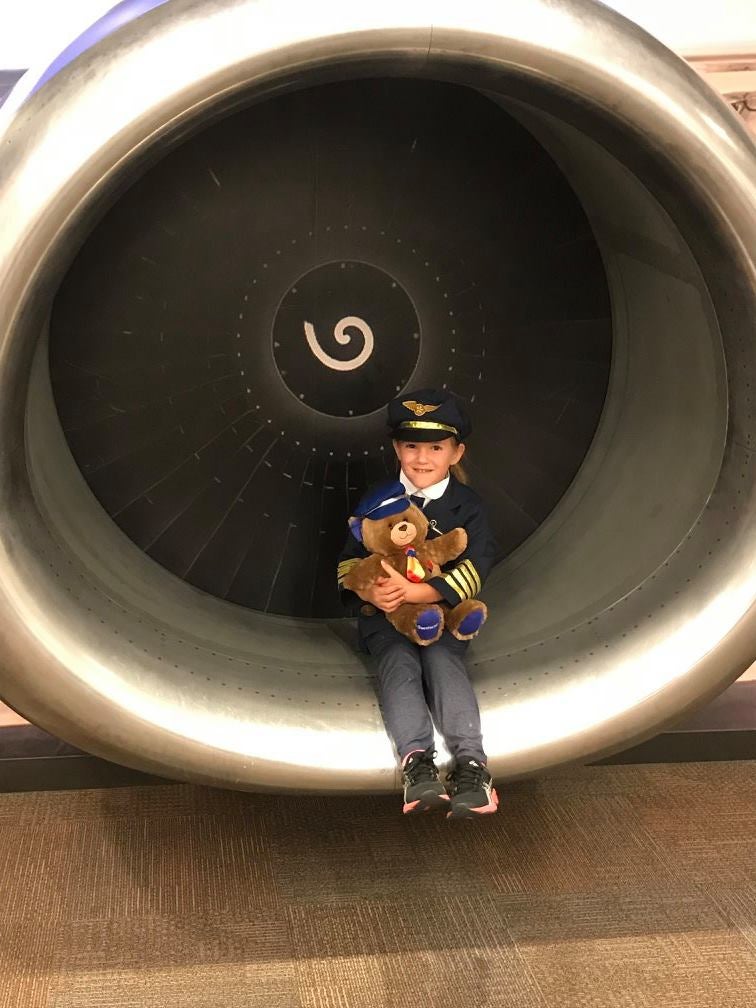 Meet Southwest's 6-Year-Old (Future) Captain
This post contains references to products from one or more of our advertisers. We may receive compensation when you click on links to those products. Terms apply to the offers listed on this page. For an explanation of our Advertising Policy, visit this page.

Some kids dream of becoming astronauts with NASA. Some dream of a lifetime of saving lives as a firefighter. And some, like 6-year-old Blair, dream of becoming a pilot. But not just any pilot: a pilot with Southwest Airlines, and she's so serious about making her dream a reality that the carrier actually already helped her to achieve it.

According to her father Jared Smith, the 6-year-old from Dacula, Georgia, has wanted to be a pilot for about half of her life now. After a divorce from Blair's mother, Jared moved from the Atlanta area to Washington, D.C., making sure that he could fly between the two cities at a moment's notice to see his daughters. During his time traveling between ATL and D.C., he became increasingly savvy about frequent flyer traveling — accumulating points and signing up for co-branded credit cards.

Two times a year, Jared flies Blair and her sister from ATL to DCA for a week-long visit. He'll travel down to ATL, pick up the girls, fly back to DCA with them and then do the same when dropping them off at the end of the week. And, to do so, Jared chooses to fly with Southwest Airlines because the carrier's open seating policy makes it easier for the three of them to sit together. Jared said that the two girls loved their trips and started to recognize flight crew — both pilots and flight attendants — as they made their way through the two airports.

After just her second trip, Blair decided that she wanted to be a pilot — her reasoning was so that she could then fly to see her Dad whenever she wanted. The desire to become a pilot was so strong that she got a pilot uniform for her birthday and started wearing it every time she flew. Every time the trio would travel between ATL and DCA with Blair in her outfit, Southwest flight crew would go out of their way to make the experience a memorable one for Blair — complete with photos in the cockpit.

After each trip, Jared would post the picture of Blair in the cockpit on social media and got great responses — even from the carrier itself. As Blair continued flying, her interest continued to grow. It grew so much to the point that Jared and she would have in-depth conversations about the process of becoming a pilot — Jared thanks Google for his newfound knowledge on the profession. According to Jared, at one point, she became concerned that she "might not make it as a pilot," as she noticed how few female pilots she saw during her travels. So, Blair and her farther started keeping an eye out for female pilots during all of their travels.

Last July, as Jared and his two girls were at DCA, they noticed a flight crew switching out, with the incoming first officer being a woman. Of course, Blair stopped to take a picture with the first officer and then Jared tweeted it out to Southwest. This time, Southwest not only retweeted Jared but also sent him a DM, asking more information. The social media team sent her a goody bag of Southwest-branded merchandise, which she loved.

About six weeks later, someone from the Social Care team at Southwest reached out to Jared — this time, with news that the Flight Operations team wanted to invite Captain Blair to the company's Dallas headquarters. After some planning, Southwest arranged to fly Jared and Blair from ATL to Dallas Love Field (DAL) for a tour of the headquarters and some time in a Boeing 737 simulator.

"I kept joking with Blair that I was having more fun than she was and she quickly shot me down saying that we were having the same amount of fun!" Jared said.

Jared described their time in DAL as amazing, with every employee they passed encouraging Blair to continue pushing toward her goal of becoming a pilot.

Where Blair's story gets even more heartwarming has to do with a set of wings — yes, the same plastic ones that airlines hand around to children, whether or not they want to be a pilot. Jared said that as Blair walked around terminals during their travels, American and Delta employees had spotted her and given her each a set of of wings. So, when she went to Southwest's headquarters, she had both sets of wings on her uniform. But, when the two were having lunch with a Southwest pilot, he saw the lack of a set of SWA wings on her uniform. So he gave her a set of real Southwest Check Airman wings, which "caused some jealousy" on their return flight home.

"Needless to say, the American and Delta wings are tucked away and not on her uniform now," Jared said. "I got the impression that something like this hasn't happened very often for kids of non-employees. A common assumption was that I was a pilot and/or worked for Southwest. When I told people I was neither, they were very impressed that the company did something that cool for Blair."

Southwest gave Captain Blair something to remember for the rest of her life — and up until someday when she's old enough to become a real captain. Maybe at some point, Blair will be one of the crew flying on Southwest's all-female-operated Boeing 737s.

Related stories
Maximize your Cyber Monday shopping with these 10 credit cards
8 best drinks to order with a cruise ship beverage package (and 3 to avoid)
Should you do a mattress run for hotel points or elite nights?
This might be the best Amex card combo: Amex Gold and Amex Business Platinum