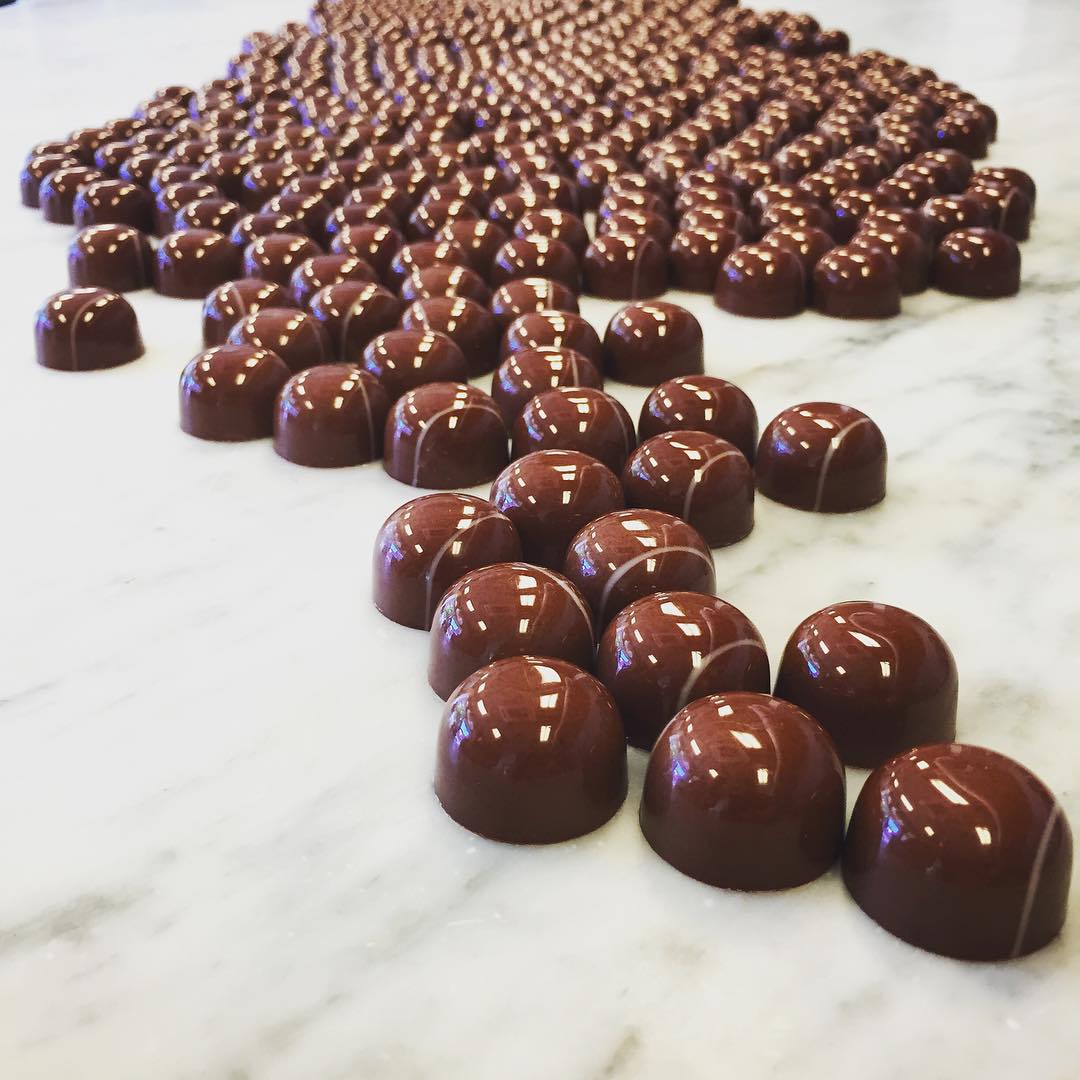 Of course National Chocolate Day falls three days before Halloween — it would practically be an injustice for it land at any other time of year, especially for all the amazing chocolatiers around the world who are getting their treats ready. We've compiled a list of the seven best chocolatiers on Instagram — with amazing images to prove it. Chocolate-makers stay busy all year round, and this glimpse into their profession is a feast for the eyes. But be careful when scrolling through: You might want to indulge immediately, but be sure to save some room for chocolatey sweets on All Hallow's Eve.

The chocolatier: Richie Budiharto Pratadaja's motto is "chocolate is the art I live" and based off his Instagram, I believe it. He works in New York City at FIKA NYC bakery as the sous chocolatier. Pratadaja was born in Indonesia and came to the US in 2004 to pursue a career in industrial design, but he said after watching Food Network for hours a day, he realized his dream was in the kitchen and attended Le Cordon Bleu's Baking and Pastry program.

Signature creation: His Instagram is filled with chocolate sculptures as well as ornately decorated bonbons. He's even recreated famous pieces of art and dips his hand in complex movements like surrealism.

The chocolatier: Maggie Louise Callahan makes "chocolate with charisma," and one look at her Instagram proves why. It's filled with every color of the rainbow on beautifully made pieces of chocolate. Maggie didn't intend to become the creative chocolatier she is today. In her past life, she was a prestigious lawyer for several years before she felt a creative void and enrolled in Le Cordon Bleu where she began an empire of making chocolates that are as decadently designed as they are delicious.

Signature creation: Maggie transforms chocolate into art. She has reinvented the classic chocolate sampler box into colorful (and customizable) boxes of playful designs. She has a passion for creating elaborate sweets and loves sharing her talent at her storefront in Austin, TX.

The chocolatier: Hakan Martensson's Instagram page proclaims: "Don't let small minds convince you that your dreams are too big." His chocolate creations indicate that he didn't let anyone get in his way as he is known for creating larger than life sculptures as well as busts of anyone from a scary clown to Yoda. Today, Hakan is the Master Chocolatier at NYC's FIKA; he previously worked at Sweden's top chocolate house and has won many awards for his work with chocolate.

Signature creation: At FIKA, Hakan has created a line of exclusive hand-rolled truffles, pralines and chocolate bars. His mission is to create an extraordinary experience and take you on a sweet journey. And as noted above, he creates out-of-this-world chocolate sculptures and busts.

The chocolatier: Kate Weiser specializes in chocolate magic, according to her Instagram bio. Her passion for chocolate and all things sweet began as a kid and later, she attended the California Culinary Academy in San Francisco and worked in several restaurants as a pastry chef until she moved to Dallas and opened her own storefront.

Signature creation: Kate's goal is to create new and unexpected ways to enjoy chocolate. Every piece she makes is a unique piece of art splashed with bright colors and unique designs.

The chocolatier: Giorgio Demarini is from Peru and has a chocolate storefront in his home country. Demarini attended the Ecole Chocolat Professional School of Chocolate Arts in Vancouver and while in school, his mom helped him opened the shop. Focusing on making traditional fine chocolates, he's since landed on several top-10 lists for best chocolatiers in the world.

Signature creation: Giorgio studied graphic design before becoming a chocolatier. Once he turned to the culinary arts, though, he combined his two passions. His love for graphic design is evidenced on his unique chocolate creations. He makes traditional pieces of chocolate shine bright with his designs — every piece is made with precision and care.

The chocolatier: Melissa Coppel was born in Colombia and went to The French Pastry School in Chicago. Shortly after graduating, she worked in Las Vegas for hotels like Caesar's and The Bellagio where she only worked with chocolate. She has opened her own chocolate workshop in Las Vegas where she regularly leads workshops. In 2016, she was voted as one of the top 10 chocolatiers in North America by Dessert Professional Magazine.

Signature creation: When Melissa opened her store in Las Vegas, she pledged to use the same imagination and artisanship of those who taught her her craft. She also vowed to use techniques, flavors and compositions from everything she learned around the world. She is quoted as saying, "I admire French pastry, but I feel much more identified with the Spanish style."

The chocolatier: Jacques Torres, aka Mr. Chocolate, is known in the confectionary community as the authority on all things chocolate. Born in France, Jacques opened his first chocolate shop in America in 2000. Since then, he has become the artisan pioneer of chocolatiers around the globe.

Signature creation: Jacques prides himself on using premium ingredients and specializing in fresh, hand-crafted chocolates. He was the first artisan chocolatier to perfect the cocoa (bean) to bar technique to make his own chocolate, so you know every piece he makes is crafted with precision and care. He now owns eight storefronts in Manhattan, including two ice cream locations, as well as a chocolate museum located at his flagship store.

Who are your favorite chocolatiers? Let us know in the comments below.

Related stories
Updated: A country-by-country guide to coronavirus reopenings
Southwest deal: Get 25% off one-way trips for Christmas and New Year's Eve travel
At just 356 miles, Delta starts flying its shortest wide-body route
Everything you need to know about tipping on a cruise ship