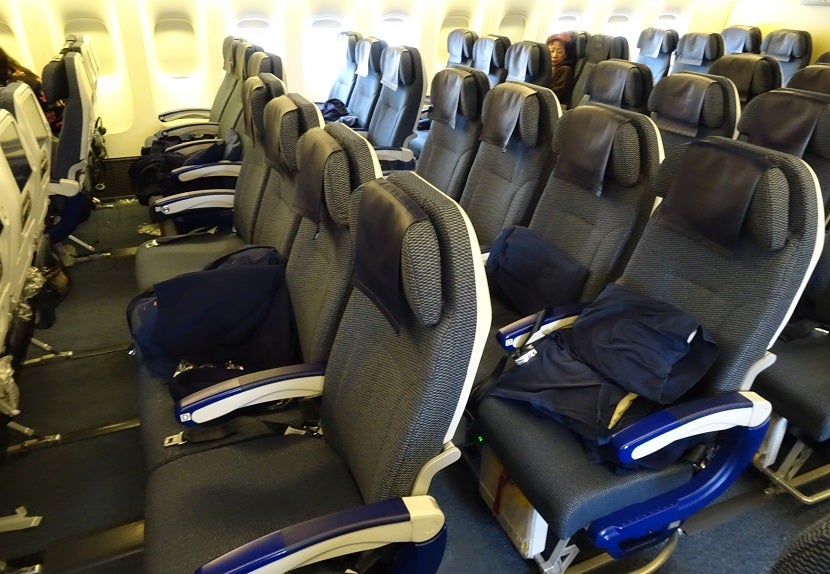 Though for many people, flying to Singapore is just a stop on the way to somewhere else, for me, it was a place I'd always wanted to visit, so when a cheap fare popped up, I pounced. Until service begins on United later this month, there are no nonstop flights from my home in Los Angeles (LAX) to Singapore (SIN), and in this instance, that meant flying through Tokyo (NRT) on ANA's Boeing 777. The last time I'd flown to Tokyo had been on United's Boeing 787 — would a change in the middle digit from 8 to 7 be a noticeable difference? And what else did my first flight on ANA have to offer?

I had come across some inexpensive flights to Asia, and after playing around with Google Flights, I was able to price out a ticket that took me to two places I'd been wanting to visit for a while now: Singapore and Kuala Lumpur, Malaysia. Now, I'd get to see both cities thanks to a flight from Los Angeles on ANA for $543. There were many inexpensive ways to get from one capital city to the other so I didn't mind booking an open-jaw ticket and figuring out the connection later — I visited the Malaysian island of Langkawi in between after finding a pair of last-minute flights that cost less than $150.

Rather than pay for the long-haul tickets in cash, I opted to use 36,190 Ultimate Rewards points, as I had just received an 80,000-point bonus from my Chase Ink Business Preferred Credit Card. This also allowed me to earn Elite Qualifying Miles (though not dollars) on United, since ANA is a Star Alliance partner. Had I chosen to pay cash for this flight, I would have put it on my Chase Sapphire Reserve Card, which would have yielded 3x points, or 1,629 Ultimate Rewards points, for the travel purchase.

A few days before the flight, I confirmed all my details and selected ANA's "auto check-in" feature — I received my boarding passes via the ANA Android app without any issues. On the morning of the flight, I checked the site and was delighted to see that I could switch my seat to a window with two empty seats next to me. I clicked with hope that the seats would stay empty. The seat change did not reflect on the boarding passes in the ANA app so I printed them out at home just to be safe. Because I was traveling with a carry-on, I was able to go right to security.

The flight left from the Tom Bradley International Terminal (TBIT) at LAX, which has notoriously long security lines. I remembered a trick I'd read about and instead had my driver drop me off at American Airlines' Terminal 4. Even though only one security lane was open and I didn't have PreCheck on my ticket — ANA does not participate in the program — I sped right through and walked through the connector to TBIT. Looking down from the bridge over TBIT, I could see I'd made the right decision.

TBIT has great lounge options and I made a quick stop in the KAL Lounge, which was free thanks to my Priority Pass membership, courtesy of The Platinum Card from American Express. The food isn't great there, but fortunately the terminal has some tremendous choices, many of which are miniature versions of Los Angeles culinary institutions — I opted for the cold fried chicken sandwich from ink.sack, and I cannot recommend it enough. The gate area offered plenty of seating, free Wi-Fi and nice views of aircraft coming and going.

The 12:35pm flight was scheduled to board before noon but at 11:55am, I noticed a new boarding time on the monitor — 12:15pm — despite there being no announcement, even after that time. Despite this communication lapse, I counted seven smartly-dressed ANA workers at the gate, one of whom roamed the area with a boarding sign in Japanese and English.

Boarding was separated into classes, and at 12:25pm, passengers in first and business classes began to empty their lanes. A few minutes later, economy passengers boarded from our area, and everyone was welcomed with a small bow. From the gate to my seat, at least five different staff members said hello to me.

The aisle was noticeably narrow, as my roll-aboard bag, which had traveled with me on dozens of different aircraft, got stuck more than once. Fortunately, the overhead bins were much more accommodating.

Each seat came with a fairly standard pillow and blanket. A footrest — which I didn't notice until just before we landed — folded into the seat in front of me near the in-seat power outlet.

An in-flight entertainment system was easy to see and use via a generous nine-inch LED touch screen and nested remote. It came with an audio jack and USB plug and next to it, a coat hook. All the entertainment (including TV, movies and games) was complimentary, and the selection of films included many recent American and Japanese hits. The IFE reset itself once during the flight and the camera feature wasn't functioning, but otherwise, it worked great.

Near the lavatories, I saw an air-to-land phone, which I haven't noticed on an aircraft in a while. The lavs were well-stocked and roomier than average.

ANA says the economy seats have 34 inches of pitch; other aviation sites say less, but either way it was roomy enough for my nearly six-foot frame. The recline was indeed significant and the adjustable headrest had great mobility — and it got even more comfortable when the door closed at 12:45pm and there was no one else in my aisle! Within five minutes, we had pulled away from the gate and 15 minutes later, the wheels were up.

Overall, the aircraft felt very solid. While not exactly quiet, I noticed very little vibration as we cruised along. The only seat issue I had was the tray table slanted down when it was lowered, not allowing me to place a drink on it without having it slide off. A flight attendant tried unsuccessfully to repair it, but thankfully, I had two other trays to choose from.

The menu in the seat pocket explained the A/B choice between the Japanese and Western menu items, along with a robust beverage list and details about the wines.

15 minutes after the seatbelt sign went off, we were served mineral water and a towelette, followed by full beverage service 15 minutes later. Drinks were accompanied by a packet of rice crackers, and I appreciated the full bilingual ingredient list on the back, since it contained items I don't eat.

For a drink, I chose the vegetable soup (why not?), which was served without a spoon in a paper cup. The broth was thin but hot. Trash was collected 15 minutes later.

20 minutes after that, our food orders were taken and new beverages delivered, while five minutes later, lunch/dinner was served. I opted for the beef stew and was struck by how much everything on the tray looked like real food. I particularly liked the Japanese touches —seaweed, wasabi sauce and noodles — and appreciated all the detail given on the menu. In addition to wooden chopsticks, the tray had sturdy metal flatware.

Alas, my meal looked better than it tasted. The veggies were not hot and had the look and feel of Birds Eye, though decently microwaved. Neither veggies nor potatoes had any flavoring or sauce — which I actually appreciated but some may find too plain — and would have liked the tray to include some salt or soy sauce. The roasted (?) potatoes were a bit soggy but overall acceptable. And why serve potato salad alongside hot potatoes?

On the plus side, the beef stew was a step up, had some good tangy flavor. A big portion was packed into a tiny container and I ate all of it. The edamame was great — hard to mess up! — as was the melon, but not so much for the sour prosciutto. The best part was the buckwheat noodles, which were so perfect I didn't even add the recommended sauce.

10 minutes later, a small container of Haagen-Dazs ice cream arrived. The ice cream was solid and cold and had obviously been kept well. I also had a variety of spoons to choose from.

After 15 minutes, trays were cleared. 35 minutes later, the cabin lights dimmed and several hours passed before any more cabin service occurred, save for the occasional offer of water and collection of trash.

Seven hours after lunch/dinner, breakfast orders were taken. I chose the fried noodles with chicken and vegetables, which was unremarkable but acceptable. Despite the unappealing color palette and a typical airplane-food goopiness, it was in fact good-quality meat and, with the warm noodles, a nice serving of comfort food at 35,000 feet. There weren't as many accompaniments as the lunch tray, but, once again, the fruit was cold and ripe. The Greek yogurt (from New York) was a cool and creamy contrast. After 30 minutes, all was cleared.

One flight attendant asked if it was my first time flying ANA — I guess the regulars don't take photos of the snacks. When I said yes, she asked how I liked it and really seemed to care. A few minutes later, she brought me an embroidered ANA keychain tag, which said "The Inspiration of Japan" on one side, and the flowery design, pictured below, on the back. That inspiration on ANA is positive, strong and contagious.

11 hours after we were in the air, an approach announcement was made and 18 minutes later, wheels were very smoothly on the ground. We pulled into the gate two minutes ahead of our scheduled arrival, even with a brief delay. Within five minutes, doors were opened and passengers streamed out. Agents with transfer information were waiting on the jetway, and like every other ANA employee I encountered, they were welcoming, smiling and accommodating.

It was a really nice flight and I can't believe it was 11 hours. The time passed quickly and smoothly, thanks in part to some fortunate seating, but mostly due to the quality product and service ANA offers to their passengers, even those of us seated in economy. Yes, the food could have been better and I would have liked more communication back at LAX, but my connecting flight to Singapore was also on ANA, and I was very glad for that.

Have you ever flown in economy on ANA's 777-300ER? Tell us about your experience, below.
All photos by the author.

Featured image by Four seats in the center in Economy.