Popping the Question in an A380 Etihad Apartment 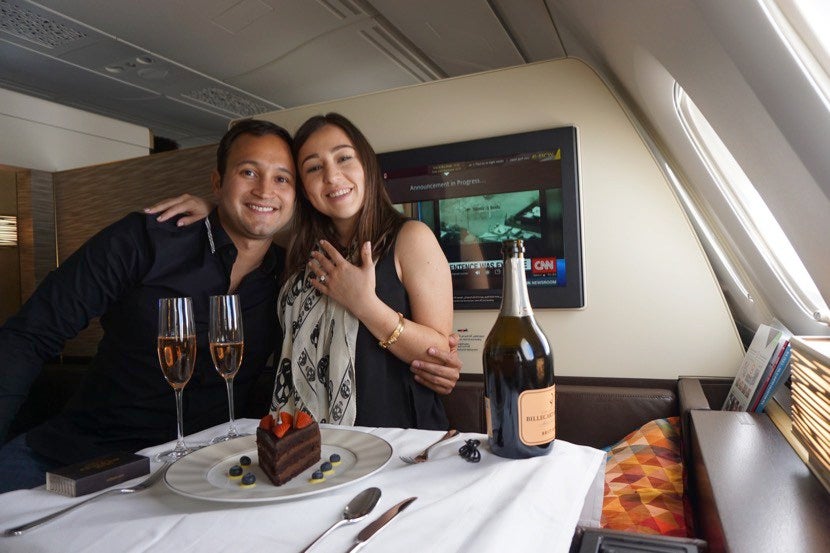 I never imagined how hard it would be to find the right way to pop the question — it takes a lot of preparation, imagination and creative thinking to come up with just the right words and the perfect setting. I had prepared myself for this moment two other times, and although those planned proposals would have been just as nice as this one, it just didn’t happen and I didn’t want to force it. As we were finalizing the details of our first trip of 2017, a quick round-the-world adventure that would take us through Paris, Serbia, the UAE, Australia and New Zealand just before going back home to Houston, I figured it was time to try again.

How Did I Make It Happen?

Last year, I redeemed 420,000 Marriott Rewards points for 120,000 American Airlines miles and a seven-night stay at a Ritz Carlton property thanks to Marriott's Hotel + Air Packages. I eventually downgraded my choice to a basic Category 1-5 package, so I ended up with 150,000 points back in my account and almost enough to redeem a second package. One of the sweetest spots on American Airlines' awards pre-devaluation chart was the opportunity to fly 14 hours in Etihad First Class Apartments from Abu Dhabi (AUH) to Sydney (SYD) and Melbourne (MEL) or vice-versa at just 60,000 American AAdvantage miles per person — such a steal!

My second redemption banked 120,000 miles in my American Airlines account, the exact amount for a round-trip or two one-way tickets on this route. This was my opportunity to get closer to flying on such a great product, so I pulled the trigger and bought two one-way tickets from Abu Dhabi (AUH) all the way to Auckland (AKL), via Sydney (SYD). At that time, I didn’t have any set dates so I just assigned random ones with availability hoping I would be able to find something later down the road.

About three weeks before our trip I got a notification from Expert Flyer: two seats had opened up in First Class and I had to snag those seats before they were gone! Luckily, the AAdvantage office in Mexico was able to see the seats available from Abu Dhabi (AUH) to Sydney (SYD) as well as our connection to Auckland (AKL), which was great because I didn’t have to call all the way to the Australian office. We were all set, apparently.

Our connection to Auckland required an overnight stay, and since we hold Mexican passports, we needed to get a transit visa to be able to stay that night on Australian soil. We applied for the visa right away — it was supposed to take five days. About a week before the actual AUH-SYD flight (we were in Paris at this point), we were notified that we needed to submit our fingerprints to the Paris Biometrics Collection Centre, and after this, it would take at least 14 days for processing! Really?

By this time, I had already talked to Etihad about my proposal intentions and the staff were great at putting everything together for me. But I guess we needed to change plans at this point and the next couple of nights were sleepless for me. The only option we had was to fly through Melbourne (MEL) which had a late flight to Auckland (AKL) the same day we arrived. While this was a permitted change because the origin and destination remained the same, the big problem, of course, was availability. There was nothing at all even six days out, but I could see that the airline was still selling seven first-class tickets, so I had high hopes of those becoming available.

We only had two days to go until the departure date when those seats became finally available! Once again, I called the reps in Mexico and got the tickets reissued with our new flights all the way to Auckland via Melbourne. I reached out again to the Etihad PR team to update them with my new flight information. Because it was such short notice, I didn’t have high expectations — I just wanted to make it to our flight!

Our flight wasn’t going to be leaving until 10:45pm from Abu Dhabi. We could have used Etihad’s Chauffeur service — which is no longer available for new award bookings — but we'd picked up a rental car in Abu Dhabi when we landed anyway and still needed to drive it back. One of my goals was to arrive at the airport early so we could enjoy as much of it as we could in the First Class lounge. The check-in agent even said, “You arrived a little early!” It was just before 6:00pm.

Our time in the lounge went by so fast! We had just enough time to take a nap, enjoy a complimentary massage, get some work done and have a full dinner. The staff let us know that they would start boarding soon, and we could head to the gate at any time. While the lounge was a great place to be, I couldn’t wait to be onboard the A380.

We boarded and Josh, the cabin manager, immediately greeted us and escorted us to our seats 3K and 4K, which were connected to each other.

Right after we settled down in our own apartments, I decided to go explore the cabin. It was at that particular moment that Liz, one of the first-class flight attendants, asked to have a word with me. She said they'd heard about my proposal plans so she wanted to see what my thoughts were about it, suggesting a few options:

While the first option sounded like a no-brainer, photos and video weren't allowed inside The Residence for our visit, it wasn’t ideal. The option with the lobby was attractive as well, however it was uncertain how many people could be in there at any particular time since first and business-class passengers have access, so it might not be as intimate as we wanted it to be. In the end, I decided the second option was the best and Liz asked what time we should execute the plan. It was 10:30pm, so we were pretty much ready to get some sleep. We agreed on a couple of hours before landing and Liz also said this timing was much better because otherwise, my now fiancée would be so excited that catching any shut-eye could be difficult.

After take-off, we had dinner together in her apartment, where Jerry, a second first-class attendant, along with Kester, the onboard chef, did a great job taking care of all our dining and beverage needs.

After dinner, it was already 1:00am, so we went to sleep right away.

We were able to get seven hours of quality sleep, which was awesome on such a long flight. When we woke up, we still had about three hours left in the sky. Of course, I wanted to shower at 40,000 feet, so it was a good time to freshen up before the big event.

Shortly after we finished breakfast, Liz came to the cabin to invite us to tour The Residence, which was incredible. She explained all the facts and features, then we returned to our Apartments. While heading back, she said that her team had prepared a sign of appreciation. She was referring to the very nice set-up waiting for us in my apartment — a slice of delicious chocolate cake, a bottle of Billecart-Salmon Rosé and two Champagne glasses.

Liz excused herself and left us alone. We took some time to chat and reflect on our memories and travels. We laughed for several moments while enjoying the Champagne. This was exactly when I said:

Hey, I would love to travel with you for the rest of my life.

I stood up, went to the side of the table, and on bended knee said:

Will you marry me?

I can still picture her reaction. She wasn’t sure whether to laugh or cry. All she said was:

Are you serious? Yes, of course!

It was such a magical moment where we hugged each other for a few minutes, clinked our glasses and enjoyed being newly engaged.

A couple of minutes later Liz came back. She congratulated us and suggested we take our celebration to the lobby. Once there, we took the time to enjoy the rest of the ride while discussing the ring and the overall experience.

It was an awesome day. I still don’t know whether we were more excited about the proposal or the experience of flying in Etihad's Apartments. The flight was such a smooth ride and I would like to thank the amazing crew we had for making our trip perfect: Josh, Liz, Jerry and Kester. Kudos to you all!

Do you have an in-flight proposal story of your own? Tell us about it, below.