What Can You Legally Film on Airplanes and in Airports? 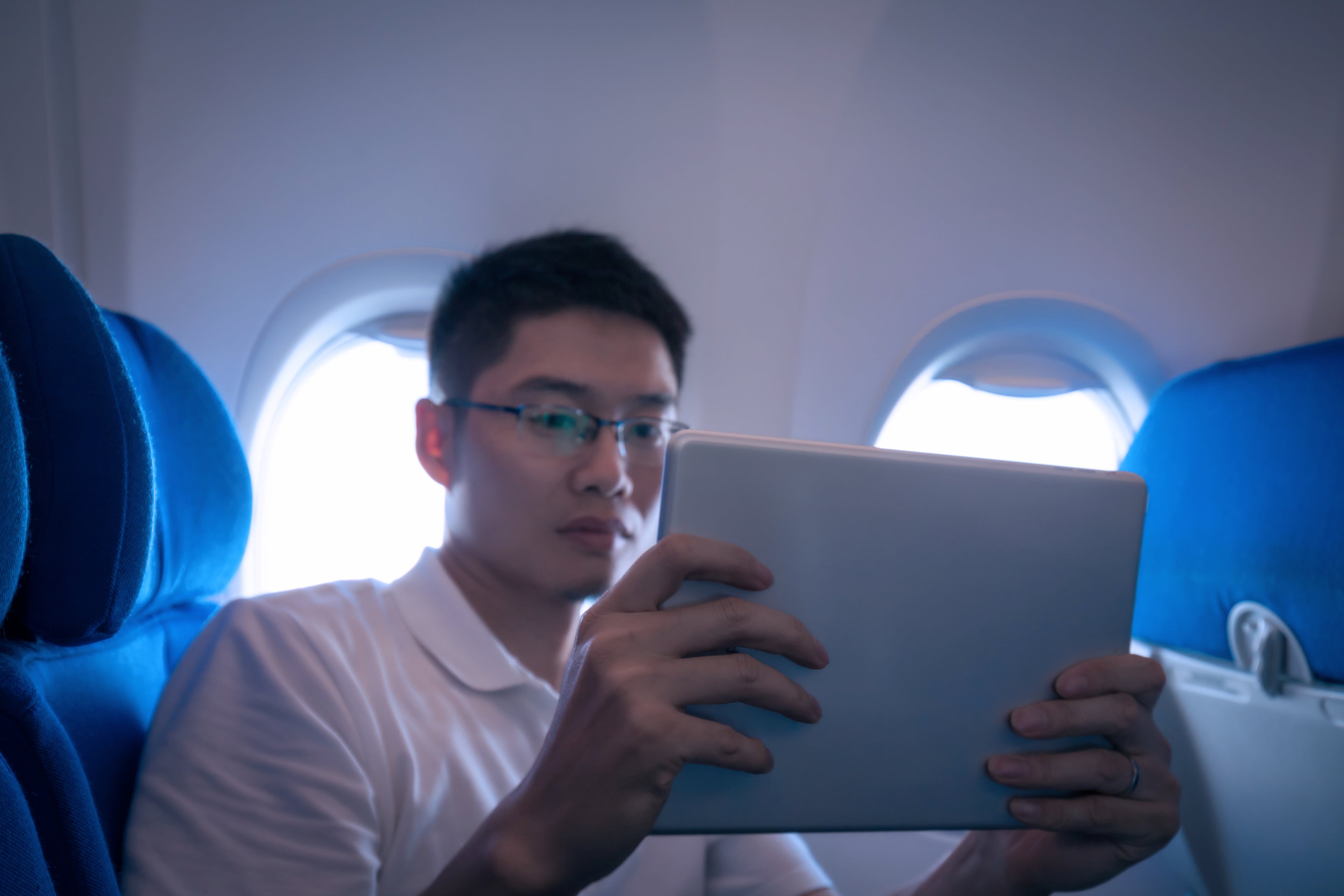 Everyone has seen the video of the man being dragged off the United Airlines flight. The loop ran continuously on all the major news outlets. United settled the claim for an undisclosed amount most likely because of the virality of the video. The airlines’ response to such publicity was not exclusively to change its policies to be more passenger friendly. In the event that this happens again, airlines are trying to make sure that there is no leaked footage which can be more damaging than any potential lawsuit.

This article seeks to answer the difficult question that many passengers have, “What can you legally film on airplanes and in the airport?”

A good starting point is whether it is legal to film the police. In the United States, as long as you are legally able to be where you are positioned — and the act you’re recording is public and plainly visible from your vantage point — you’ve got the right to record it. This right includes taking a pic or making a video of police or any government official carrying out their duties as well as any government building or transportation facility.

Certain exceptions exist for audio recording and wiretapping, but in terms of public officials conducting public business, you have the right to video and audio record documentation. Please note, this does not cover private recordings, especially private telephone calls.

The police cannot ask you to stop recording, they can’t take your phone and they can’t require you to show them what you’ve recorded. That is a search, and a search requires a warrant. Law enforcement cannot search your cell phone without a warrant—this rule of law has been upheld by the US Supreme Court, Riley v. California (2014). If the police believe you’ve captured evidence they may need in an investigation, a valid search warrant may be granted. If you are interfering (blocking or obstructing) with an investigation (usually this is at the police officer’s discretion), you may be charged with a crime. If you are detained (not free to leave) or arrested, always remember you have a right to an attorney. Do not resist the police.

When it comes to audio recording or capturing police on video, each state is different, check the statutes in your location to be sure you’re okay to record. Call a lawyer if you’re not sure.

Bottom Line: Yes, you can publicly record public interactions as long as you don’t interfere with an investigation or obstruct justice.

US Border Patrol is a federal law enforcement agency. Since the beginning of 2017, particular attention has been paid by the public to the seizure and search of people (and their electronics) at US entry points.

Border Patrol Agents have a radial jurisdiction of 100 air miles, and their authority is quite broad and ambiguous. Like the police, their stops require probable cause. But unlike police, their searches do not. You are not entitled to a lawyer during BPA stops, since all travelers are responsible for establishing their ability to legally enter a country. But you can always ask to speak to an attorney, so you should always carry the number of an attorney to call, just in case. You always have the right to remain silent, but you can be detained or denied entry for doing so (another reason to have a lawyer on call).

Can you record these agents on your personal devices? The same constitutional protection is afforded to you in the United States as if you were with the police; if it’s a public place, and you have a public vantage point, you can publicly record and document the situation.

BP and Customs agents, like police, are fair subjects for recording however, two important caveats exist. First, you cannot inhibit, hinder or delay traffic at these locations (this is a subjective standard, established by the agent). Second, you cannot record, by any means, in locations with special privacy or security concerns; this includes actual interactions with agents and any secondary inspection. (If passports or other identifying documents are out and/or personal information is being shared, even if it’s your own, recording is prohibited). Do not resist or evade law enforcement. Call a lawyer if you’re not sure.

Bottom Line: Recording Boarder Patrol and Customs agents is not recommended. While you can publicly record public actions, the majority of these interactions are not considered public. You can be detained or denied entry into the United States for failure to comply with requests of these agents.

Based on the TSA’s social media presence (its blog is a treat) and giggles behind the x-ray machine, it’s safe to say they’re documenting you, so, should you be able to document them? First rule to be applied, as with the first two agencies: the First Amendment of the Constitution allows public persons to record public events from a public vantage point.

The TSA, like the law enforcement agencies above, request that passengers not inhibit, hinder or delay traffic, and can never record private information (monitors included). That state or municipality may have recording statutes beyond the federal statutes. Check them first.

If you become disruptive, TSA can call local law enforcement and you can be arrested. If you are arrested, you will likely be charged pursuant to the rules of the state and municipality where the airport is located.

If you feel you have been treated unfairly for any reason, as above, you can always request to speak to an attorney. Call a lawyer if you’re not sure.

Bottom Line: Yes, you can record, but it has to be public information (nothing private, like monitors) and you’ll still have to put your phone or camera through the x-ray machine and walk through without alarm.

"Use of still and video cameras, film or digital, is permitted only for recording personal events. Photography or video recording of airline personnel, equipment, or procedures is strictly prohibited."

In simpler terms, you purchase a ticket from an airline. That ticket is a contract. That contract contains certain terms and conditions that you, the purchaser, can accept or reject. If you accept, in exchange for your cash you are allowed to travel with this particular company subject to the stated terms. Any violation of the terms allows the contract to be voided. That means, they can prevent you from flying.

One hypothetical scenario could be: you taking a selfie with a Singapore Airlines lobster breakfast. That’s probably okay, since this is a personal event, and although some airline equipment is contained in the photograph (your seat, IFE, tray, etc.), the purpose of the recording is personal. Take your picture. Another situation might be your amazing first-class seat on Emirates complete with ornate gold everything, full bottles of Champagne and empty bottles of said Champagne. Still okay, personal experience all the way.

A different scenario, and the kind the airline is concerned about, might be you recording an argument with a counter agent or flight attendant for the purpose of filing a dispute or legal claim. Although personal to some, this interaction is likely to fall under the “do not record per the conditions” section of your agreement. Should you continue to record, the airline agent would be within the agreed-upon bounds to deny you the benefit of travel. Even though this display might be public, you have still agreed to the terms of your particular contract and should not be shocked when those terms are enforced. An onlooker recording the same interaction would be subject to the terms only if he or she was a passenger of that particular airline.

While it may seem unfair, the airlines can and do enforce these terms. It should not come as a surprise when a public relations fiasco puts the airlines on alert to protect themselves, their employees and their passengers.

When it comes to recording airline agents, first consider the terms of the contract you have entered, and whether you want to give up your seat for potentially breaching those terms. If the answer is yes, then consider your location. Are you in the United States? If the answer is yes, are you in a public place, viewing a public event, from a public viewpoint? And, finally, does the state or city allow you to record publicly without restriction? If these answers are all yes, you can record. If they are not, then you cannot, put your phone away.

If you feel you have been treated unfairly, as always, contact an attorney to discuss your individual circumstances and rights.

Bottom Line: No, you cannot record if you agreed to not record. If you did not enter such an agreement, and you are in public, viewing the public, you can record.

While the government can’t restrict your ability to record in public, the contract you sign can.

Outside America, it is not recommended that you photograph, film or record any government agent or government building without prior permission from that government. Always check the local laws when you travel, and always consult an attorney if you are unsure. Do this before you travel.

Bottom Line: No, do not film.

Some helpful links below:

To search your state statutes and local laws online, visit your state legislature’s current year posting of Laws and Statutes (ensure you’re checking a .gov site). Each state is different, and may use different coding and language. City and municipal codes should be checked as well. Contact a lawyer if you are unsure, or to see if the laws in your state have changed.

The ACLU Filming and Photographing the Police

Know Your Rights with Border Patrol

Alexander Bachuwa is a New York attorney who focuses on consumer and international dispute resolution. For more information, visit the Bachuwa Law website or The Points Of Life, his travel blog.

Related stories
Save money with these travel-related offers on your credit cards this month
Use these shopping portal bonuses to earn extra miles this holiday season
Using miles and points to book airline tickets and hotels for others
Maui magnificence: A review of Kaanapali Alii, a Destination by Hyatt Residence
Featured image by Getty Images/iStockphoto