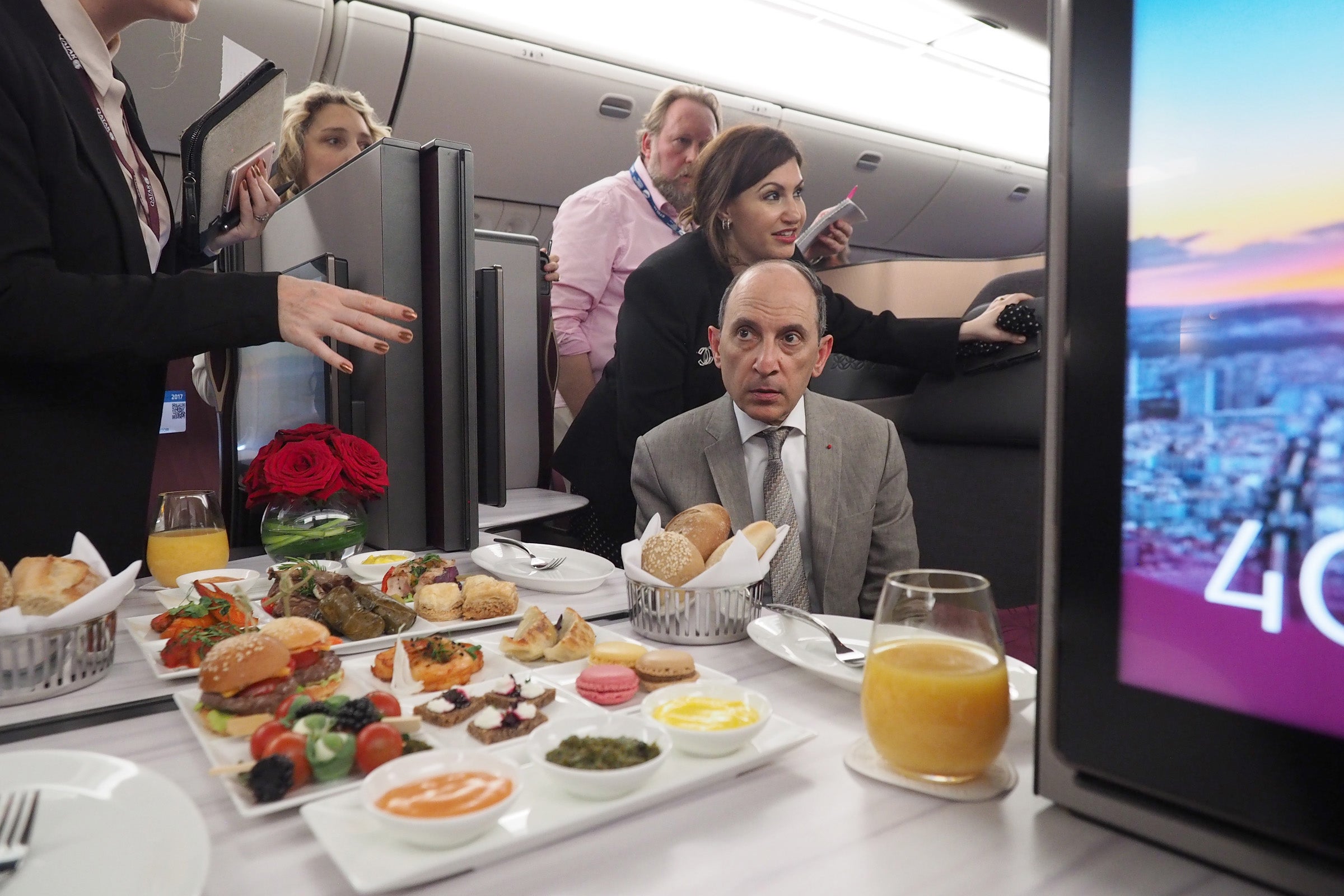 Update 6/21/17: An earlier version of this post referenced 3-3-3 seating in economy, however with this 777 retrofit, Qatar has added a seat to most rows, with 10-abreast seating now the norm.

At the last Paris Air Show, way back in 2015, Qatar Airways stole the show with its then-new Airbus A350, complete with 1-2-1 business-class seats and a refreshed economy cabin. This time around, the airline's back in the spotlight, showing off its retrofitted 777-300ER for the very first time.

Normally, a 777-300ER wouldn't be terribly exciting — the aircraft has been flying for nearly 15 years. But Qatar chose a 777 to be the first aircraft to receive the airline's Qsuite business class, which is, quite possibly, the new best business-class product in the world.

This particular 777, A7-BED, has spent the last six weeks getting its Qsuite upgrade in Zurich. That's an awful lot of time to have an airplane out of commission, but Qatar seems willing to invest in this new product — not to mention the fact that the airline isn't utilizing its entire fleet at the moment.

Qatar CEO Akbar Al Baker is known for his meticulous attention to detail, and that definitely shines through here — there are unique design elements throughout, such as the textured wall panel near the entrance and the etched lighting panel above.

There are a total of 42 business-class seats on this plane — 24 in the forward cabin (which was being used for live television interviews and wasn't accessible during my visit) and 18 in the smaller rear cabin.

Incredibly, Qatar Airways managed to fit the same number of business-class seats in its two cabins as you'll find on 777s with the older seats, with an identical number of seats in each cabin.

With the main cabin off-limits, I spent most of my time in the smaller business-class cabin, which sports a total of 18 seats spread between four rows.

Note the "quad" seat arrangement below — paired rear and forward-facing center seats can be connected by sliding the in-flight entertainment displays to the side, creating a suite of sorts for families or colleagues traveling together.

I even managed to snag some bed time in row 7 — seats E and F, which form a double bed when in the full-flat position, are pictured below.

Meanwhile, here's another configuration, seat 10F — as you may have noticed, it's positioned much closer to the aisle than the two seats above.

Window seats also alternate between a window and aisle-adjacent position, and some face toward the rear, such as 8K below.

Grab a window-side seat for maximum privacy. In the forward cabin, window seats in odd-numbered are positioned closer to the window, while that applies to even-numbered rows in the rear cabin. The reverse is true for seats located closest to the aisle.

There's not much to worry about on the privacy front, though — all seats have a sliding door, so you won't have to worry about making awkward eye contact with someone across the aisle during your flight.

There was also a fairly random assortment of food on display — would you like a side of macarons with your pan-fried gyoza? How about some sliders and OJ? Hmm...

Moving on to the rest of the cabin, there's a magazine rack positioned next to the galley between both business-class sections. Personally, I prefer the open bar area on Qatar's A350, though — the 777 does feel more private, but there's no question that the A350 has a more airy feel.

There are two decent-sized lavatories between the business sections, and apparently there are another two next to the cockpit — though I unfortunately I wasn't able to get up there to confirm.

Biz passengers receive an amenity kit, but some items, such as toothbrushes and shaving kits are available in the lav.

While business class has gotten a massive facelift, economy hasn't exactly changed for the better.

Qatar's 777 now offers 3-4-3 economy in almost all rows on this plane, which means a tighter squeeze for those seated in the back.

All economy seats are more or less identical, with at least 31 inches of pitch, though of course you'll have more legroom in the bulkhead rows.

Three seats in particular are especially spacious: 19D, 25D and 37D, as they're missing a seat in front.

Economy passengers do get a small amenity kit on long-haul flights, along with a pillow and blanket.

Qatar Airways' hit the nail on the head with its new Qsuite business class. This product really is fantastic — I love the double bed feature, and while the quad seat design may not get as much utilization as the airline may have imagined, it'll certainly come in handy for some. I just wish the airline had left its 3-3-3 seating in coach.

I can't wait to put Qsuite through its paces on the inaugural flight from Doha to London this Saturday — the airline's latest business class is expected to debut on flights to Paris, New York, Tokyo and Sao Paulo soon. Stay tuned for a full review!

See these posts for more from the Paris Air Show:

Head to this page for a complete list of our 2017 Paris Air Show coverage.