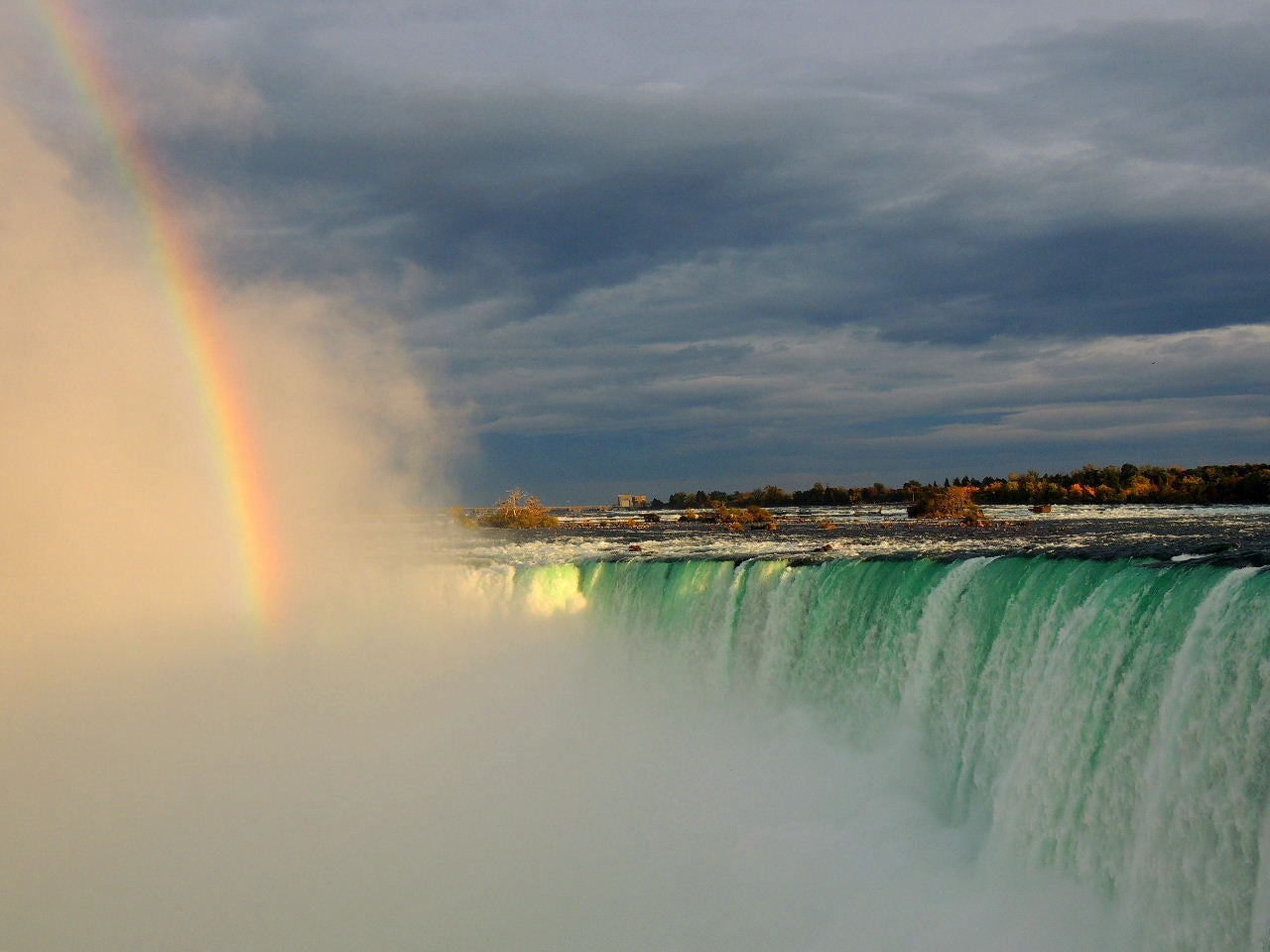 My personal perspective of waterfalls changed forever about 60 years ago. My family was in Rocky Mountain National Park when, as a nine year old boy being a nine year old boy, I slipped on some wet rocks and went over Chasm Falls. I was physically unhurt, but psychologically scarred.

I have had waterfall-a-phobia ever since that long ago October day. I love looking at them from a distance, but the thought of being near the headwaters above the falls, any falls, is quite disconcerting. I immediately envision some dire scenario like one you might have seen in the old Saturday morning movie serials at your downtown theater. You know the type scene I am referring to. It is a boy, a girl and a dog trapped in the rushing water on a raft, or a boat or while clinging to a log, knowing that a mile down river is the 100 foot Falls Of No Return.

For three or four straight Saturday mornings you watch this life and death struggle and you are always left with a cliffhanger moment that leaves the outcome uncertain. Will they? Won't they? Come to next Saturday's Kid's Show to find out. It was great marketing. Anyway, these are the thoughts I have when visiting waterfalls.

So, we fast forward to our recent trip to Niagara Falls. What do you think was one of the first things pointed out to me (after the limited parking and the multiple $20 parking fees)? Well, it was an old boat stuck in the water about 200 yards above the Horseshoe Falls.

Yipes, I knew it! My Saturday morning movie serial fears were right.

However, my imagined world and my self acknowledged fears, were soon overtaken by the sheer majesty of Niagara Falls. It was big. It was powerful. It was beautiful. And, it was loud.

Niagara Falls is really a series of three falls, American, Bridal Veil and Horseshoe. Luna Island separates the American and Bridal Veil, both on the American side, and Goat Island is between them and the Canadian Horseshoe Falls. Collectively they make up what is known as Niagara Falls.

It would be an understatement to say we felt small, weak and insignificant while standing near this aquatic onslaught. The volume of water crashing over the edge was epic. It would be safe to say that the force is strong here as close to a million gallons of water a second fall over the watery cliff. The Falls were like a visual magnet that you couldn't free your eyes from. They were mesmerizing, hypnotizing and breathtaking. We found that watching the coke bottle green water was indeed a pause that refreshes.

We wanted to see the Falls from the ground level, from below and from the top edge. We wanted to feel the spray, hear the symphony and be a part of the experience. And, we did.

As with most visitors, we took the boat tour to the base of The Horseshoe Falls. The famous Maid Of The Mist launches from the American side and the Hornblower from the Canadian shore.

We were staying in Canada and opted for the Hornblower. The experiences are identical. Similar type boat, same destination, same length of tour and same price. We are referencing the boats as singular but rest assured there are multiple MAID OF THE MISTs and HORNBLOWERs in operation at all times. The process is simple. You buy your ticket, elevator down to the rivers edge and wait in line to board. Hundreds board each boat and travel the less than half mile up river to the base of the falls.

Unless you stay locked up in the restroom, you will get wet, very wet. But the visitors we were on board with wore smiles with their ponchos, wet faces, glasses and hair. We were all participants and not just spectators as we rode through the tumultuous spray and everyone grabbed their phones and cameras when a rainbow appeared just off the stern of our boat.

The ride lasts 20 to 30 minutes and costs $18.25 US for an adult ticket and qualifies as a "should do" when visiting Niagara Falls.

We viewed The Falls from both the American and the Canadian side. We got as comfortably close to the water as my phobia would allow. Keep in mind that you do have to go through border crossing to go from one country to the other and back again, but that process was very efficient and no-nonsense on our visit.

It felt safe, it looked safe, it was safe but my antennae were still up and running at full signal strength. The U.S. side is accessed from Niagara Falls State Park, opened in 1885, and is the country's oldest state park.

It puts the visitor close to the crest of the two American Falls through a series of easy and beautiful trails and bridges over to Goat Island. The colorful foliage made for a resplendent Fall walk at The Falls.

At Goat Island, you can purchase tickets to The Cave Of The Winds, a truly interactive, immersive, sensory loaded, drenching experience.

If you want to feel The Falls almost from the inside out and from head to toe, then The Cave Of The Winds is very much for the adventurer in you.

I think this would be a great training ground for television's weather reporters prior to being sent out to report on actual hurricanes.

Here, they can practice the spiel, " the rain and wind have really picked up in the last few minutes as we are now receiving the first feeder bands from the approaching storm." The $14.00 cost for The Cave Of The Winds includes the ubiquitous Niagara Falls poncho (yellow) and souvenir sandals that you are required to wear for safety and for the preservation of your shoe choice for the day.

The top of the Horseshoe Falls on the Canadian side is adjacent to a new and very comfortable Visitor's Center that offers shops, information, restrooms and various food options. We were greeted by another rainbow while viewing the thunderous watery plunge from this viewpoint.

The rainbow played hide-and-seek with the visitors as it danced in and out of the clouds of mist and spray that were quite prevalent the days we were there.

Turning Niagara Falls On and Off and All Lit Up

Niagara Falls hosts about 25 million visitors a year and these people obviously come to see the Falls. With this in mind, the powers that be do all they can to be sure the guests get what they want. In the peak tourist months the flow over The Falls is near its maximum as less water is diverted for hydroelectric production. Also, to maximize viewing hours and options, The Falls are illuminated at night with powerful multi-colored lights that are accompanied by a fireworks display.

Evening boat rides are available on the river for those wishing to view the night attractions from the water.

A few interesting facts about the area include that four of the five Great Lakes drain into The Niagara River and that almost 20% of the world's freshwater is found in The Great Lakes. Most of this freshwater flows over The Falls. The flow rate of water over The Falls is reduced by half each night during the tourist season and stays at 50% between November and April. This allows the two hydroelectric plants enough water to generate the needed electricity and to keep their reservoirs full.

There are several casinos on both sides of The Falls for those so inclined. We briefly tested the waters at The Fallsview Casino on the Canadian side and were very impressed with both the size and the overall environment. The Fallsview Casino is very much in the same league as the casinos in Las Vegas. In fact, the commercial area away from The Falls reminded us of Las Vegas in both good and bad ways.

We are so thrilled we added a couple extra days to our northeast adventure to take in Niagara Falls. Several factors came into play in making that decision. Those considerations included the fact that we were going to be within 300 miles, that it was a destination that we had not yet visited and that we had heard that in the near future the American Falls was going to go purposefully dry. The water will be blocked and diverted so that construction work can be done on several bridges just above the Falls. This de-watering last happened in 1969 and actually proved to be a tourist boom. The exact date for the next American Falls-less-ness has not yet been determined, but for safety's sake we opted to go while we knew the faucets were on.

It has been predicted in some scientific circles that Niagara Falls could eventually cease to be as it might erode all the way back to Lake Erie. It is estimated such an occurrence could take at least 50,000 years. That seems like a long time, but in the grand scheme of the universe and using some geologic to human time frame comparisons, that 50,000 years relative to the purported age of the earth is like 8 hours of an average person's lifetime. Whew! I am sure glad we went when we had the chance or we might have missed it.

And that would have been sad.

Safe travels and enjoy the journey visiting Niagara Falls and beyond!