When It Makes Sense to Transfer Starpoints to Marriott

You might also be interested in reading When It Makes Sense to Transfer Marriott Points to Starwood.

The big news of the month in the points and miles universe has been the finalization of Marriott and Starwood’s merger. This became official on Friday, and while it will be a long time until the two are fully integrated, the newly combined hotel chain wasted no time in opening up reciprocal elite benefits and point transfers. You now have access to a wealth of new redemption possibilities by being able to convert points from one program to another. Today I want to highlight some cases where it may make sense to convert your Starpoints to Marriott Rewards points.

Before getting into the specifics, let’s quickly review the basics. The first step you’ll need to take is to link your SPG and Marriott Rewards accounts. This can happen from either Marriott’s site or SPG’s site, and it only takes a few minutes and has to be completed before you can transfer points. This should also result in the transfer of any elite status you have; SPG Platinum gets you Marriott Platinum (and vice versa), while SPG Gold gets you Marriott Gold (and vice versa).

You’ll then need to initiate the transfer. After logging in to your SPG account, click on your name at the top and select “Redeem Starpoints.” The very first option will be to transfer points to Marriott Rewards:

Follow the simple on-screen instructions to transfer Starpoints to Marriott, and keep in mind that you must make these transfers in increments of 1,000 points. The standard transfer ratio is 1 Starpoint = 3 Marriott Rewards points.

At first glance, this may seem like a poor value proposition given TPG’s most recent valuations. You’re converting 1 Starpoint (worth 2.5 cents) into 3 Marriott Rewards points (worth 0.7 cents apiece, so 2.1 cents total). At this rate, you’d be giving up nearly half a cent of value from every point you transfer. At 50,000 Starpoints, that’s a loss of $200! However, this is an oversimplified calculation, as there are some occasions where it makes sense and can get you some tremendous value.

Let’s take a look and see where this is the case.

One great redemption option in the Marriott Rewards programs is booking a Hotel + Air package. In its simplest form, you use your Marriott points to book a seven-night stay plus receive a stash of airline miles. While SPG has a similar option (the Nights & Flights package), you’re restricted to just Category 3 and 4 properties, while Marriott’s option covers all nine of the chain’s categories plus all five tiers of Ritz-Carlton. As a result, this is significantly more flexible.

There are two specific examples of these packages where you’d be able to extend the value of your Starpoints by transferring them to Marriott:

When you redeem Marriott points for a Hotel + Air package with United, you’ll receive more miles than any other airline partner. This is thanks to the RewardsPlus partnership that launched back in 2013. While the exact number of points you’d need for these packages varies depending on the category/tier of the hotel and the number of miles you want, you’re essentially getting a 10% bonus over other airlines. Here’s the full chart:

It’s true that SPG also allows you to transfer points to United, but unlike most of the program’s 36 airline partners (Avianca was the most recent addition earlier this month), you’ll only get 1 United mile for every 2 Starpoints you transfer, a pretty dismal rate. As a result, if you have a stash of Starpoints and are looking to boost your United account and book a seven-night hotel stay, this could be a great option at both the low and high ends of the above chart.

Here are a few examples:

Another great option for these packages is Southwest. Part of this is due to the fact that Southwest doesn’t partner with SPG at all, so there’s no way to convert your Starpoints into Rapid Rewards points. However, Marriott does partner with Southwest for Hotel + Air packages, and it’s a great way to score a Southwest Companion Pass for just 90,000 Starpoints.

Here’s the chart for these packages: 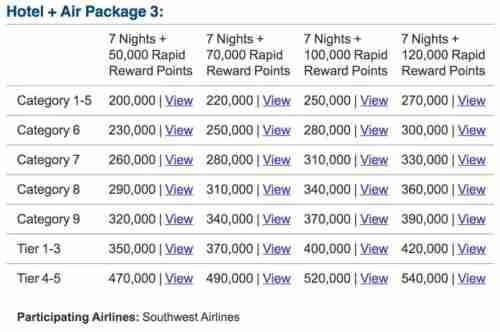 There’s no question that 90,000 Starpoints are valuable, worth $2,250 based on TPG’s valuations. However, the Companion Pass essentially offers “Buy 1, Get 1 Free” on all Southwest flights on both paid and award tickets, and if you time it right (January 2017), you could wind up with the Companion Pass for almost two years. TPG did a very similar redemption himself to earn a Companion Pass earlier this year.

That being said, there’s a big disclaimer to point out. As of now, hotel points transferred to Southwest (including points earned through Marriott’s Hotel + Air packages) do count toward Companion Pass qualification. However, there’s nothing to stop Southwest from changing this policy at any point, so just be aware before you commit to booking this package.

Another time when it makes sense to transfer Starpoints to Marriott is when you’re looking at top-tier properties. At the high end of Marriott’s award chart are Category 9 properties like The Cosmopolitan in Las Vegas, requiring 45,000 points for a free night (40,000 points if the hotel has PointSavers Rewards available). At the current ratio, you’d only need to transfer 15,000 Starpoints to Marriott Rewards for a free night at these properties.

On the other hand, Starwood’s top-tier hotels require either 30,000 or 35,000 points for a free night, depending on the date of your stay. At that rate, you can book two free nights at top-tier Marriotts for the same number of Starpoints you’d need for a single free night at top-tier SPG properties.

Transferring Starpoints to Marriott Rewards can also make a lot of sense if you are a current SPG Gold member. This includes cardholders of the Platinum Card from American Express, who can enjoy this status as a benefit on the card (see this post for details on how to activate it). Under the newly announced reciprocal elite status arrangement with SPG and Marriott, this status grants you automatic Marriott Gold status, one of the most rewarding mid-tier hotel statuses out there (and one that normally requires 50 nights a year). This unlocks additional perks like breakfast/lounge access and room upgrades.

For SPG Gold members, you’ll only get automatic lounge access at Sheraton hotels when you have the Starwood Preferred Guest Business Credit Card from American Express, and you’re only able to upgrade to “enhanced” rooms at check-in, which tend to be limited to higher floors or rooms with better views. If you’re currently a Gold member with SPG and would like to experience additional elite benefits, consider transferring your Starpoints to Marriott Rewards for an upcoming award stay.

Booking in Cities Without Many Starwood Properties

A final reason why you might want to consider transferring Starpoints to Marriott Rewards is if you’re planning a trip to an area with few (or no) SPG properties. Even though the combined chain has more than 5,700 hotels around the world, the individual programs are still operating independently and thus must be booked using “legacy” points. At the time of writing, Starwood Preferred Guest has roughly 1,400 hotels globally, with another 500 or so planned openings in the next few years. Marriott, on the other hand, has more than 4,000 properties around the world, giving you many more options for your free nights.

Let’s say that you wanted to plan a trip to the beaches of Southwest Florida, for example. SPG only has four properties in the area: one Aloft, one Westin and two Four Points. Meanwhile, Marriott has dozens of properties in the same area, including two Ritz-Carlton resorts and several properties right on the water. If SPG has limited coverage in a destination you’re wanting to visit, transferring to Marriott and booking through Marriott Rewards could be a great option.

Now that the merger between Marriott and SPG is finalized, you can freely exchange points between the two programs. This opens up an array of options that weren’t previously available. However, you should carefully analyze whether it makes sense to convert Starpoints to Marriott Rewards points before locking in a redemption. Hopefully this post has given you some suggestions for doing just that!

Have you converted Starpoints to Marriott Rewards points yet?

Sign up for our daily newsletter
Nick Ewen is a Senior Editor and was one of the site's first contributors in 2012. He’s visited 41 countries (and counting) and has taken his five-year-old daughter to 20 of them.
You might like
Croatia reopened to US travelers — here’s what you need to know
News
11h ago
How to use flight-tracker apps to tell what planes are flying overhead
News
12h ago
Delta still plans ‘gateway’ Miami hub with LATAM Airlines partnership
News
Yesterday