Using a mix of money and Avios to score an overall pretty great deal, our family recently flew in British Airways business class to and from London. While it probably sounds strange to those who haven’t don it, I’m a big fan of business class for international trips with kids because even though the parents may not get to relax as much as they would without the kiddos along for the ride, the kids themselves are as comfortable as possible…and a rested kid is almost as a rested parent.

One element of a long international flight with kids that is always interesting to see unfold are the kids meals they serve on-board. If you are flying with your little ones and want them to be served a children’s meal instead of whatever the standard offering for the flight is for adults, you must request their special meal ahead of time. You cannot assume that just because you booked the ticket for a child that the information will translate to a child’s meal being available. Requesting the special meal 24 hours before departure is a common cut-off, but I would do it as soon as you book the flight if possible. You can do this online with British Airways or you can call in.

Just like with adult meals, airline kid’s meals aren’t always five star masterpieces. We’ve been served some strange things before with the in-flight kid’s meal, but this time around the British Airways kid’s meals didn’t disappoint. My six-year-old didn’t love everything on the meals, but she found plenty to fill her belly. Since there isn’t tons written about airline kid meals, I thought I’d share a look at the British Airways kids meals we experienced on our recent flights.

On the afternoon outbound flight from Houston to London the kid’s meal served consisted of a large bowl of grapes, Lay’s potato chips, a ham and cheese sandwich, carrot and celery sticks, chocolate pudding, a kit kat, and a juice box.

She was happy quite full enough enough with just the grapes, sandwich, and chips, but then we found out that was just one course?! 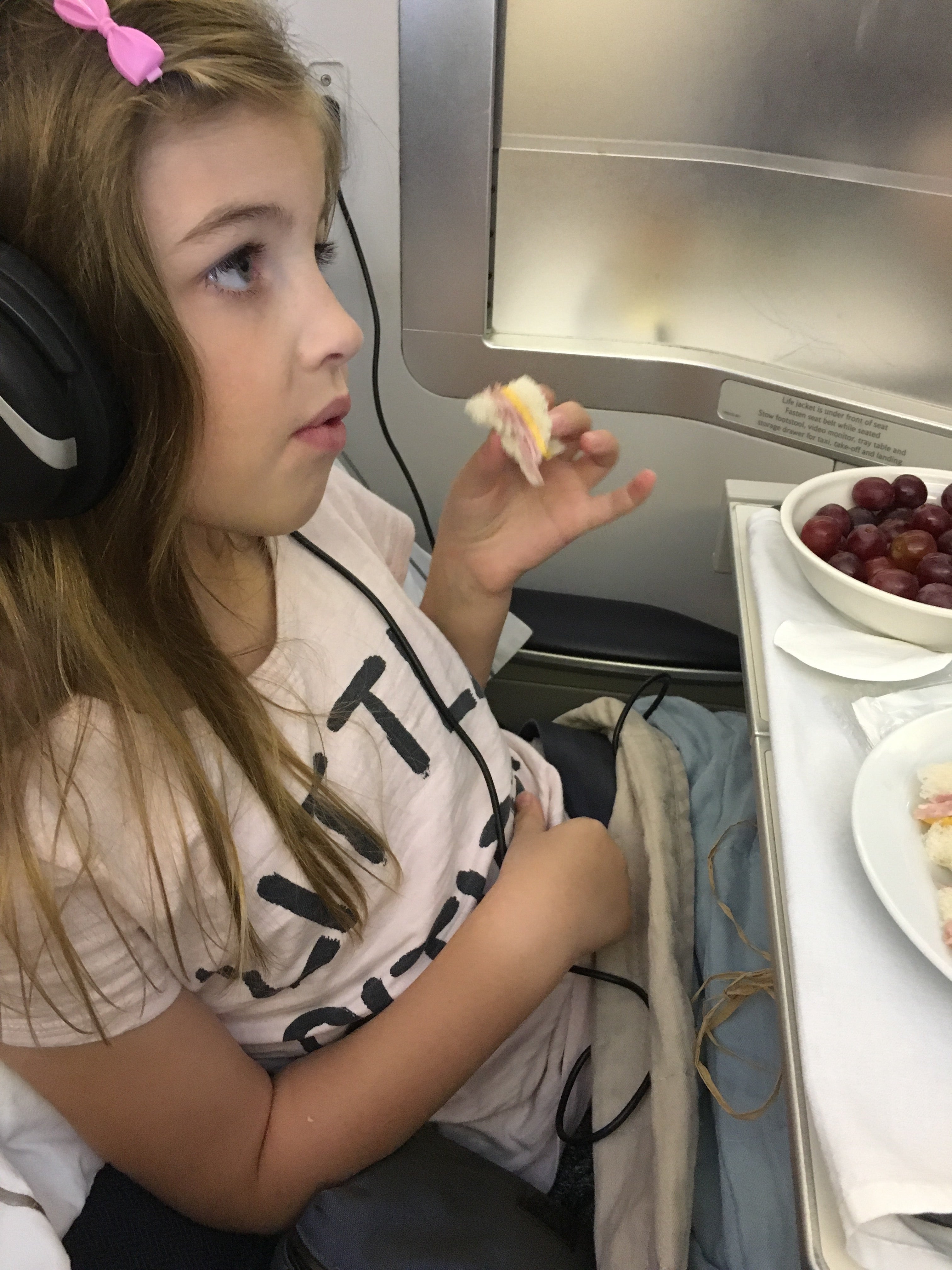 A second hot course of chicken fingers, peas and carrots, and mashed potatoes came out about 30 minutes later. She didn’t put much of a dent in the hot course, though the vegetables on this plate were perfect for my one year old lap infant who didn’t qualify for her own meal as she didn’t occupy her own seat.

For what it’s worth, I tried the chicken on this plate and it was soggy and not my favorite. Still, put enough ketchup on it and at least you won’t be hungry I guess.

Breakfast was offered shortly before landing, but she wasn’t interested in that meal so I have no idea what it was other than knowing a kid’s meal was available.

On the return afternoon flight from London to Houston there were again two courses to the children’s meal in business class, but the first course wasn’t quite as substantial this time. The first course consisted of fruit, a roll, yogurt, raisins, and a chocolate candy. You know, snack food.

My daughter and I both thought the chicken fingers tasted a little better this time around than on the outbound flight. In all cases the kid meals came out towards the beginning of the meal service, which we were grateful for. Thanks in part to requesting and receiving kid meals that kept our six year old happy, at no point were any of us left hungry on these British Airways business class flights.

What has your experience been with kid meals on British Airways or other airlines?

Sign up for our daily newsletter
Summer Hull aka Mommy Points, ran the Mommy Points site for families who want to travel more for less using miles and points for seven years and now heads up TPG Family when she isn't exploring the world with her own two girls.
You might like
You can now earn and redeem AAdvantage miles on Royal Air Maroc flights
News
26m ago
There were only 6 Airbus A380s airborne in the entire world today
News
36m ago
Deals galore: 20 popular routes to the Caribbean available for under $100 in late 2020
News
1h ago
Delta SkyMiles® Gold American Express Card
Apply Now Limited Time Offer
70,000 miles Welcome offer
$840 TPG valuation*
Earn up to 70,000 bonus miles. Earn 60,000 bonus miles after you spend $2,000 in purchases on your new Card in your first 3 months. Plus, earn an additional 10,000 bonus miles after your first anniversary of Card Membership. Offer Expires 4/1/2020.
Earning Rewards
2X Earn 2X Miles on Delta purchases, at restaurants worldwide and at U.S. supermarkets.
1X Earn 1X Mile on all other eligible purchases.
Why we like it
More Information
Intro APR on Purchases
N/A
Regular APR
15.74%-24.74% Variable
Annual Fee
$0 introductory annual fee for the first year, then $99.
Balance Transfer Fee
Either $5 or 3% of the amount of each transfer, whichever is greater.
Recommended Credit
Excellent/Good
Apply Now
Terms and restrictions apply. See rates & fees.