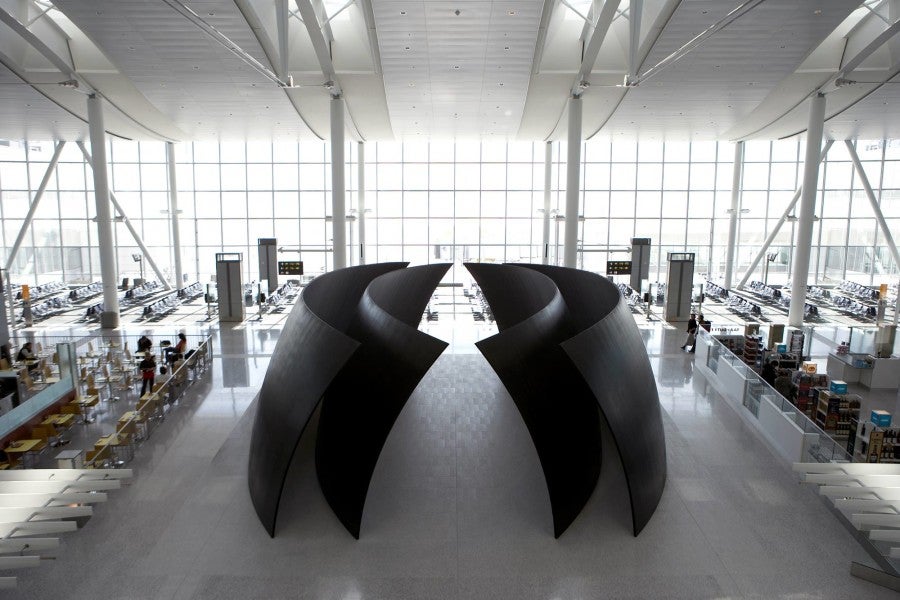 Layover Lowdown: Toronto Pearson International Airport
This post contains references to products from one or more of our advertisers. We may receive compensation when you click on links to those products. Terms apply to the offers listed on this page. For an explanation of our Advertising Policy, visit this page.

Our “Layover Lowdown” series feature airports and destinations around the world where you’re likely to be stuck between flights, offering tips on navigating and spending time in the airport, as well as some things to do if you find yourself with time to explore the nearby city. TPG Contributor (and Toronto native) Alyssa Schwartz guides us through Toronto Pearson International Airport.

Toronto Pearson has two terminals, 1 and 3, which are connected by a monorail shuttle. Even if you have just a few hours here, you can still enjoy some of Toronto—and Canada's—trademark attractions without even stepping foot outside the airport.

In Terminal 1, "A Scene from the Late Jurassic" features the massive skeleton cast of an allosaurus, the most common carnivorous dino back in Late Jurassic times, towering over a small othnielia rex—a teaser, if you will, for the renowned dinosaur collection at the Royal Ontario Museum. More modern day wilds are captured in "Amazon of the North," a photographic exhibit featuring the untouched ecosystems of the Canadian Boreal Forest by Eamon Mac Mahon. The exhibit, located on level 3 in Terminal 1, is part of a rotating showcase of art, design and cultural installations created in partnership with a number of local institutions. The airport's permanent collection, meanwhile, is an exploration of air travel by Canadian and international artists.

For those seeking a quiet, spiritual moment, both Terminals 1 and 3 have interfaith centers with full-time chaplains onsite. Pearson also has free Wifi and Global Entry members can access Canadian Nexus machines for speedy customs clearance.

From wood-fired pizzas to Jewish deli, Pearson has brought on board some of Toronto's biggest culinary names for a roster of options which elevate typical airport fare. At Bocconne Trattoria in the Canadian departures area, and Boccone Pronto at the U.S. gates, Chef Massimo Capra (a Canadian Food Network personality and chef/owner of downtown's Mistura) turns out thin-crust pizzas, pastas and fritti such as calamari and arancini. It doesn't get more comforting than a bowl of matzah ball soup and a smoked meat sandwich—you'll find both at the offshoots of Caplansky's Delicatessen, with locations in both terminals.

For a step up from the usual mass market offerings, grab a seat (each with its own iPad) at Vinifera, a wine bar located in both terminals which has more than 85 wines, plus 20 beer selections and artisanal small plates, on offer. Or, sample from Toronto's diverse ethnic buffet—from Lebanese hummus, tabbouleh and halal-certified meats at Paramount to Indian street food from the chef behind Toronto's innovative Amaya restaurants, Pearson's offerings reflect the multicultural offerings you'll find in town.

Get your fill of classic Canadiana at Hudson's Bay Company, a 342-year-old institution which began as a northern trading post and today is one of the country's more fashionable department stores. Terminal 1 offers label-lovers enough designer offerings to put a dent in your wallet and your wait for your flight: among the boutiques, you'll find Burberry, Bulgari, Gucci and Ferragamo. Terminal 3 is less chi-chi, but your duty-free and souvenir needs are still well-served.

Transport to the City Center

Opening this spring, the UP Express will soon be the quickest way into town—trains depart Pearson for downtown every 15 minutes, and it takes just 25 minutes to reach Union Station where passengers can connect with local trains, subways and buses, or stroll to the many nearby attractions (adult fares from $19 CAD/ $15.50 USD, one way). Taxis are flat-fee based on city region; fares to downtown cost $53 CAD ($43 USD). The TTC, Toronto’s public transit, can get you into town for just $3 CAD ($2.45 USD), but getting downtown requires a 25-minute bus ride and two subway connections, making it a better option when you have time to spare.

Located the base of Toronto's CN Tower (and a 10-minute walk from Union Station) Ripley's Aquarium of Canada is home to more than 160,000 sea animals, including color-shifting jellyfish and sharks and stingrays who call the glassed-in Dangerous Lagoon tunnel home. If you're hoping for a bit of fresh air - paired with some blood-pumping adrenaline—take the elevator up the tower and then take a walk along the outer rim of the observation level. At 1,168 feet, it's not quite as high-altitude as your flight, but it's not for the faint of heart either. Afterwards, if time permits, walk or take a quick cab ride over to St. Lawrence Market, a 200-year-old food hall named best market in the world by National Geographic, for a quick bite before heading back to the airport. (Min. recommended layover time: 4.5 hours)

After you arrive downtown, hop a cab to Kensington Market, a vibrant, multicultural neighborhood full of food shops, independent restaurants and vintage shops. Bordering Chinatown, the area is a maze of narrow streets and alleys – navigate them on your own by foot or join a food tour for the lowdown on this historic, epicurean ‘hood. Once you’ve had your fill, the Frank Gehry-designed Art Gallery of Ontario is but steps away—their collection includes 80,000 works ranging from ancient times to modern day, or you can enjoy the building itself: one of the world’s foremost architects, the Toronto-born Gehry designed the light-filled AGO building to be a link between the art inside and the city itself. If you’ve got more time for exploring, head west to the neighborhood recently named by Vogue as one of the world’s coolest—West Queen West. Full of great bars, restaurants and indie shops, this is a great district to grab a bite and cocktail, and perhaps take in some live music, before you catch your flight.

There’s no site more iconically Toronto than the aforementioned CN Tower—and you don’t need a penchant for heights to take in views of this 1,185-foot giant from the fire pit at The Ritz-Carlton, Toronto’s DEQ Terrace and Lounge (it’s on ground level). With 263 rooms, the Ritz is smack in the center of Toronto’s business district, and steps from theaters, restaurants and sports venues—but you also might want to stay in and check out the spa, the only Clarins My Blend facility outside of Paris. Rates start at $390 CAD ($319 USD) or 50,000 Ritz-Carlton Rewards points per night.

For a good night’s rest (and perhaps a workout or pampering session before your next flight) without leaving Pearson, check into the Sheraton Gateway Hotel, connected to Terminal 3 via an enclosed walkway. The only full-service hotel on airport grounds, the hotel has 474 rooms (with triple-pane glass windows so you won’t be awakened by the roar of jets), which can be booked by the day or night. Facilities include a full fitness center with indoor pool, spa and club lounge. The day rate here starts at $119 CAD ($97 USD), or overnight from $149 CAD ($122 USD)—including 15% off room service, hotel spa services, and dining at Mahogany Grill Restaurant—or 10,000 Starpoints per night.