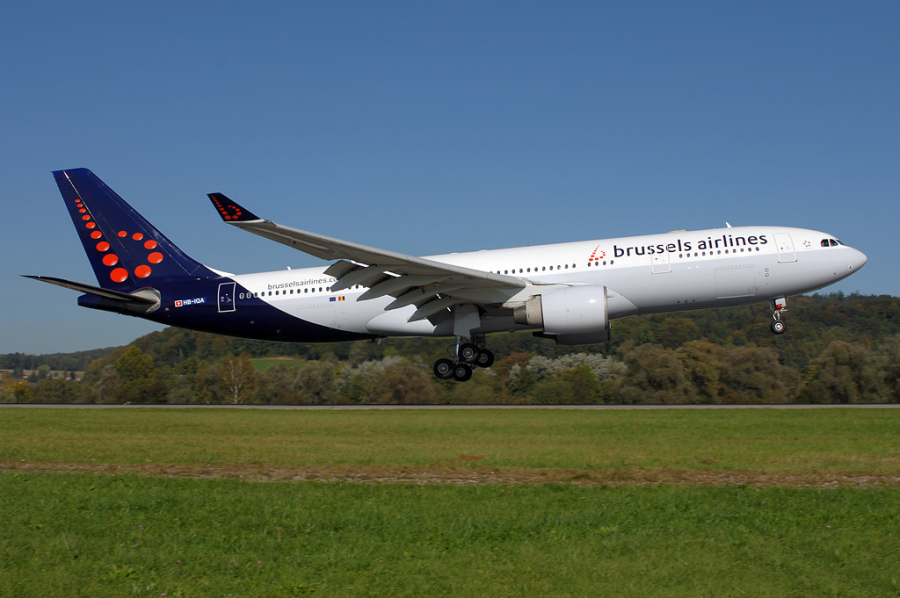 Flight Review: Brussels Airlines A330-200 Business Class BRU-JFK
This post contains references to products from one or more of our advertisers. We may receive compensation when you click on links to those products. Terms apply to the offers listed on this page. For an explanation of our Advertising Policy, visit this page.

When looking for a way to get back to New York from Dublin last week, I was unable to find any direct non-stop flights, so I widened my search to other cities figuring I could have a stopover elsewhere. Of course, avoiding London was a priority so I wouldn't have to deal with the egregious fuel surcharges. I looked through the options within Star Alliance and found a business class flight on United.com on Brussels Airlines which cost me 70,000 MileagePlus Miles plus $56.50 in taxes plus a close-in booking fee of $75. After a quick look at photos of Brussels Airlines interiors, I decided to do it, and I instantly transferred some Ultimate Rewards from my Chase Sapphire Preferred to my United MileagePlus account and booked the ticket right on the spot.

To get from Dublin to Brussels, I booked a ticket on Aer Lingus which is a quick 85-minute flight and spent two nights exploring the city, which I will get to in future posts.

Check in at Brussels
On my day of departure, I took the train to Brussels Airport, I checked my bag through a check-in line specifically for flight 501 (BRU to JFK). After checking my bag, I walked through the priority security to the T Gates, which felt like 3 miles from the check-in counters and with parts of the airport under construction and the lack of a people-mover train...it was a schlep.

Additionally, some of the moving walkways were not working, so this was an incredibly long walk. With time to kill and the need to get some work done, I wanted to have a look at the lounge so I popped into the location near the beginning of the terminal. Once inside, I was greeted by a full display of the business class product on a rotating unit and accompanying video. I walked in and was told by the agent working that there was another lounge closer to my gate and given how much farther I would have to walk and at the risk of being late for my flight, the agent suggested I visit the other lounge.

I finally made it to the Brussels Airlines Sunrise Lounge at the edge of the airport to find a nice airy space featuring very nice facilities including light snacks, a full bar, showers, a silent area and business center.

Cattle Call
When we were ready to board, I arrived at the gate to what could only be described as a cattle herding. There was no dedicated business class line, nor priority boarding. However, I flashed my ticket to the gate agent asking where to go and she scuttled me to the front of the line. I boarded the plane and walked to my seat in the last row of business class.

My Throne Across the Pond
The 22 seats in the business class cabin were arranged according to the configuration above, I was lucky enough to receive the far right seat, K in row 5, essentially a 'throne' chair with full flat seat flanked by tables on each side and decorated with a printed zebra stripe wood. Although SeatGuru had said that this seat could be bothersome due to its close proximity to the galley and restroom, it didn't prove to be a problem.

Brussels Airlines markets the seat as 1.97 m (6'5"), however when I laid on it, my 5'7" body just hit the edge of it, so I know TPG's 6'7" frame would probably not fit so well without some contortion. The seats featured a "Pneumatic Cushion System" which automatically adjusted itself when I got up from my seat to make it more comfortable. The seat also included a 110 AV outlet, a USB outlet/charger as well as a reading light and bulky non-noise cancelling headphones which provided great sound quality, but could have been a bit more comfortable.

Although the options for three seating positions were available (Upright for takeoff/landing, Lounge, and Lie Flat), I found the touchpad lumbar controls a bit difficult to adjust, and it did not give me the option to move individual sections like the back, or neck like other systems allow.

I turned on the in-flight entertainment center to find a over 100 hours of programing from new movies like "August: Osage County" to Belgium-centric flicks like "In Bruges" as well as TV shows, games, flight maps and children's entertainment. The programming was available in six languages and with an intuitive touchscreen proved easy to use.

When Planes Go Mechanical..Sort Of
Approximately 30 minutes after boarding, exploring my seat and receiving a Kir Royale, the captain came on the loudspeaker to announce that the ground crew discovered oil on the tarmac. He went on to say that they were unclear where it came from so rather than explore the situation, we were told that we would need to disembark and they would have a new plane ready for us within a few hours. Obviously no one was pleased to hear this, however I applaud the crew for making this quick decision rather than discover an hour into the investigation that we would ultimately need to change aircraft. Everyone on board begrudgingly deplaned, went straight to the ticket counter where we were given a new ticket for the same seat, as well as a €13 voucher to use for a meal, however I opted to go back to the lounge to wait it out and grab a nibble and drink there.

After a delay of over two hours, we finally reboarded the new plane. I took the same seat and got ready for the flight. There was no difference between the planes, however I did notice that the amenity kit was different on this plane, previously it was a standard dopp kit shape, this time it was a padded tablet case (filled with a toothbrush, toothpaste, eye mask, earplugs, tissues, pen and Rituals chapstick).

I was presented with an in-depth menu in English as well as French and Dutch (the two national languages of Belgium in addition to the rarely spoken German) which highlighted a meal curated to include Belgian specialties by Flemish chef Geert van Heckle.

The purser came around with a selection of wines as well as the beer of the month, a Tripel from Bruges, but I chose the wine of the month, an Argentinian Malbec.

Cuisine
To start was a small appetizer of a smoked salmon as well as foie gras brochette and mixed nuts, followed by a starter of parmesan panna cotta along with smoked filet of beef and mozzarella and pesto and a side of arugula, sugar snap peas and black sesame seeds.

The panna cotta was incredibly rich and creamy, and although at first the beef filet had a bit of a strange texture, but once combining with the panna cotta and shaved parmesan it was a nice bite. You will see that they did provide a total of 9 utensils wrapped in the napkin, and it was bit cumbersome to have triplicates of spoons, forks and knives on the tray, so I placed them aside on the table next to me in order to make space.

I opted for the veal entree as my main course, and although I appreciated the fresh touch of sprinkled parsley served on the cart beside my table, I found the dish a bit disappointing. The veal was seasoned well and cooked to a nice tender feel, however the vegetables were somewhat bland and limp, and everything was very soggy and oily. At this point I was fairly full so I passed on the dessert which was a chocolate mousse, but I did try some of the Belgian cheeses as well as a piece of Neuhaus chocolate that the purser provided me which was a nice end to the meal.

Throughout the dessert course and for the remainder of flight, there was a self-service bar featuring Laurent Perrier champagne, fresh fruits, port and more Neuhaus chocolate, which is the "Royal Warrant Holder" and the leading Belgian luxury chocolatier.

Nap Time
Following the meal I opted to watch a movie and snooze for a bit, so I moved my chair into the full-flat position. The pursers passed around blankets and more wine in case we were temped.

The leg-rest portion of the chair moved into the area between the seats in front of me as the seat transformed into sleep mode, and a 'mood light' was located by my feet giving them a blue glow.

A Hearty Pre-landing Snack
A 'mid-flight treat' of Destrooper ice cream was served while I was out cold. However, about an hour before landing a snack was served, which was a Moroccan beef stew served over couscous.

It was very good and the meat was tender, but I was surprised at how heavy of a dish it was considering that we had just been served our lunch only a few hours earlier. Personally for a 'snack', I would have preferred something closer to a salad versus a stew.

Decent Food, Top Notch Service
In total, the service on the flight was top notch with an attentive staff who were constantly checking in, offering refills and making sure all of our needs were met. Right before landing the purser came around and apologized again for the delay and provided each business class passenger a big box of Neuhaus chocolate. An unexpected surprise and a nice way to end the trip.

Even given the disruption at the start of the journey, I was very pleased with the service provided and the entire Business Class product. The A330-200 was clean, comfortable, the in-flight entertainment center had several options and the food was pretty good! I'd definitely recommend this option as a great direct flight from Brussels to New York using Star Alliance miles.

Featured image by Brussels Airlines A330-200