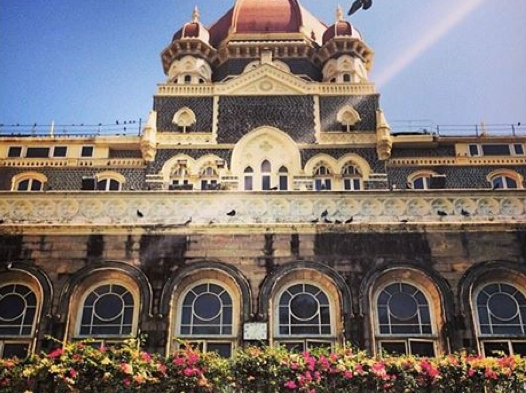 Hotel Review: The Taj Mahal Palace And Tower, Mumbai
This post contains references to products from one or more of our advertisers. We may receive compensation when you click on links to those products. Terms apply to the offers listed on this page. For an explanation of our Advertising Policy, visit this page.

On my whirlwind trip to Mumbai, India, this week, I not only got to meet Ke$ha and Sharon Stone, but also had the pleasure of staying at the Taj Mahal Palace and Tower.

As many of you know if you follow me on Twitter, Instagram or Facebook, I headed to the city that was formerly known as Bombay for the amfAR Gala on November 17, where Ke$ha and Sharon (we're on first name terms now!) were joined by Hollywood celebrities such as Hilary Swank and Kenneth Cole for the fundraising event.

After staying in an over-water bungalow at the Conrad on Rangali Island in the Maldives for a few days, I headed to Mumbai via Goa, for the charity event and checked into the Taj Mahal Palace and Tower.

I had booked one room for three nights through Travelocity at a cost of $215.02 per night because I got a 15% discount plus $123.63, which came to a total of 768.69. Not bad for a lavish hotel that has been the crown of India since the 1898! I also got valuable extra Chase points for booking through the Ultimate Rewards portal, which was an added bonus.

I followed in the footsteps of countless stars, politicians and even royalty who have stayed at the hotel, including George Bernard Shaw, Barbara Cartland, Douglas Fairbanks, Sir Richard Attenborough, Baz Luhrmann, Mick Jagger, Margaret Thatcher, Prince Charles, and even Jacqueline Onassis - but everyone is treated like a king at the Taj Mahal.

I was given a Sea View Superior Room with Queen Bed Tower Wing, which is in the newer part of the hotel that was added in 1973. Architecturally different, but in synch with the spirit of the Palace, the Tower added 20 stories of arches and balconies to bring the grand total of rooms to 560.

Decorated in a combination of European and Indian architecture, the Tower rooms are more modern than the traditional Palace rooms, but just as opulent. My room came with WiFi, a coffee and tea maker, mini bar, flatscreen TV, DVD player, and access to the business center. While it wasn't as posh as some of the suites filled with Indian antiques and art, or the Rajput Suite – where John Lennon and Yoko Ono once stayed for five days without ever leaving – that has a carved wood swing, gold-plated doors, marquetry furnishings and a peacock wall mural, I was still satisfied.

Best of all was the spectacular view of the Mumbai skyline and the Gateway of India, which I could stare at for hours on end.

The hotel's amenities include the Jiva Spa, which offers Ayurvedic treatments (though sadly I didn't have time to indulge), and a business center and fitness center that are both 24-hour. Six restaurants include Wasabi by “Iron Chef” Masaharu Morimoto, Masala Kraft, which serves gourmet Indian food, Souk, serving food from North Africa and the Middle East (the Moroccan rose petal ice cream is killer), Zodiac Grill for French food by candlelight, Shamiana, which serves Indian and international food, and Sea Lounge, for Asian specialties plus high tea.

To properly enjoy this historical landmark's fusion of Moorish, Oriental and Florentine architecture, the Indian furnishings and the 400 plus artworks lining corridors and other public areas, I strongly recommend taking the hotel’s Art and Heritage Walk.

Along with offering luxurious accommodation to the rich and famous for over a century, the Taj Mahal Palace and Towers is famous for being one of the targets of the series of terrorist attacks in Mumbai in November 2008. During the horror the hotel's roof was destroyed, and in total 167 people were killed, 31 of which were at the Taj, in the horrific three-day rampage that ended with the gunmen barricaded in the hotel.

I am happy to say that Mumbai is a peaceful and hospitable city now, however the memories of the victims live on and I credit the hotel for its full return to glory.
[card card-name='The Platinum Card® from American Express' card-id='22504813' type='javascript' bullet-id='1']

For more information on the city that is known as the 'Manhattan of India,' read Destinations of The Week: Mumbai.

Featured image by The fabulous Taj Mahal Palace and Towers in Mumbai, India.