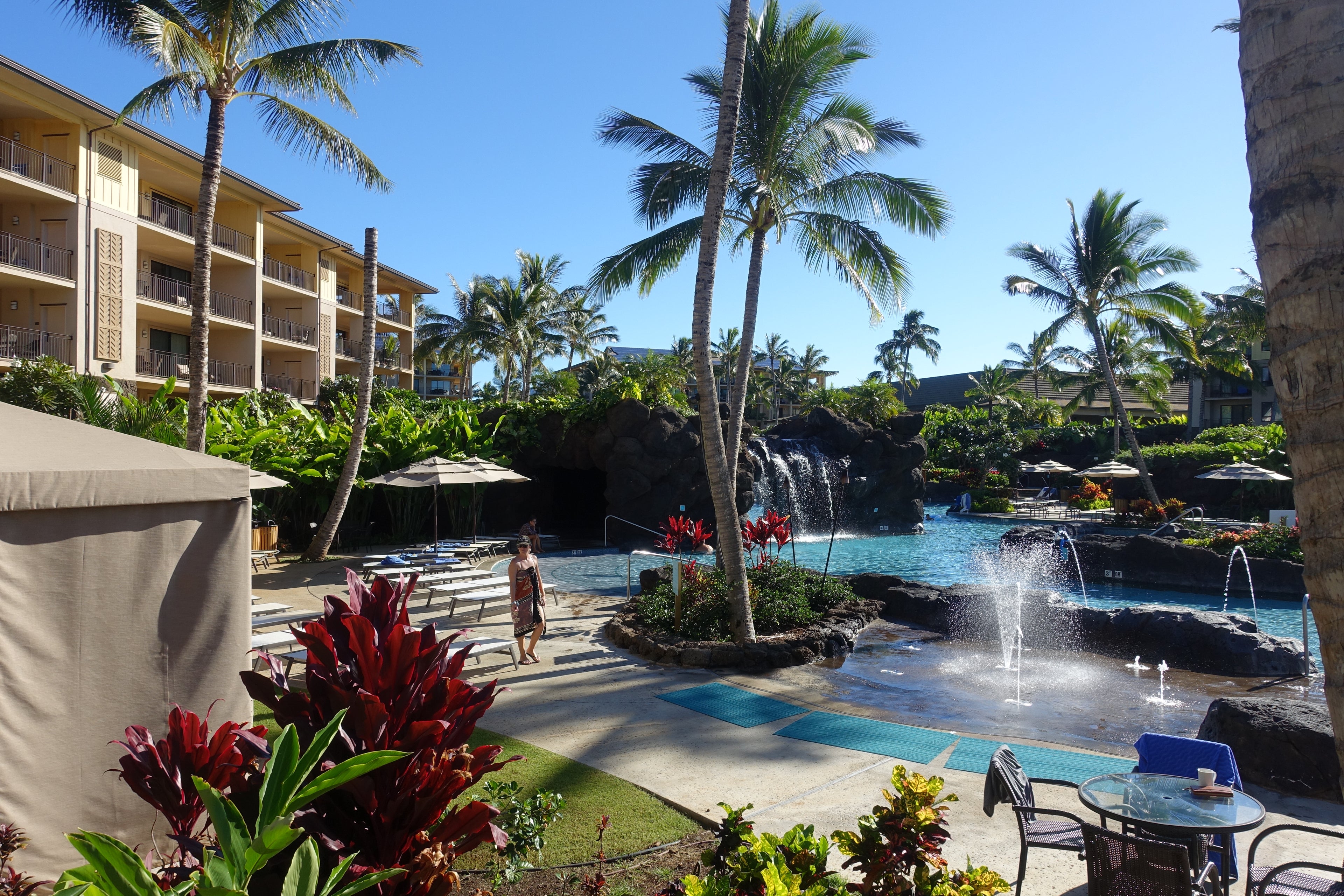 Koloa Landing, near Poipu Beach on the sunny southern shore of Kauai, is part of Marriott’s Autograph Collection, a group of more than 100 hotels meant to feel more like independent luxury properties. Last year, this 21-acre resort completed a $100 million renovation, according to Travel Weekly. Of course, I had to check it out while I was in Kauai. And the investment definitely showed: The resort was slick but peaceful and didn’t feel like a mass production.

This property is a Category 6 property in the Marriott Rewards program, meaning you’ll need anywhere from 40,000 points to book an award night in the off-peak season to 60,000 for a night in the peak season. However, on the dates that I needed to stay, there was no award availability (we were booking at the last minute), so we booked the two-night stay for $832 through hotels.com with a Capital One Venture Rewards Credit Card, which earns 10x miles per dollar spent on hotel reservations when booked through the special link at Hotels.com.

You can also stack this with Hotels.com Rewards, which awards one free night per every 10 paid nights. Since the free night is based on the average price of the 10 nights, when stacked with the 10x miles from the Venture Rewards, it effectively gives us a 20% return on this reservation — one of the very best credit card returns you can get when spending cash on hotels.

Koloa Landing sat on what is said to be one of the sunnier and better beaches on Kauai: Poipu Beach. The resort was in the historic town of Koloa, which was once known for Koloa Sugar Mill, the first commercial sugarcane plantation in the Hawaiian Islands. There were also two shopping districts nearby that were both a 10-minute walk or a few minutes by car.

The hotel was about a 30-minute drive from Lihue Airport (LIH). There was no hotel airport shuttle, so the only options were to rent a car or call an Uber. App-based car services were few and far between in the southern part of Kauai, so we found it best to rent a car at the airport. Koloa Landing also offered Enterprise rentals on site, though it cost a $50 drop fee to return the car at the airport. The resort provides complimentary self parking, so we were happy that we didn't have to shell out extra cash just to park.

Walking into Koloa Landing felt like walking into paradise. The lobby had a stunning vista of the resort’s elaborate pools replete with palm trees. Beyond that: the sparkling ocean. There was an artificial stream that trickled from the lobby all the way to lower pools, creating tropical sights and sounds as soon as you stepped into the building.

We were given fresh leis upon check-in, an extra touch that accentuated the fact that we were now in Hawaii. The staff also gave us a welcome bag, a branded pool tote containing a bottle of Hawaii-brand filtered water and local chocolate-covered macadamia nuts. They explained that this was part of the $32 daily resort fee which also included complimentary mai tais at check-in, complimentary Wi-Fi for up to eight devices, complimentary self parking, access to all the pools (though you'd think that access to all resort pools should be a part of the room rate), access to sports activities including a putting green, access to the 24 hour business and fitness centers, access to grills across the property and more. Though the list was exhaustive, nothing besides the complimentary mai tais and Wi-Fi felt like perks that shouldn't already be included in the price of entry.

We arrived at about 11am, and our room wasn’t ready, but, as I said above, the front desk gave us two vouchers for complimentary mai tais, which we happily cashed in at the poolside restaurant, Holoholo Grill. At about 1:30pm, we got a text saying our room was ready for us.

The sweeping Koloa Landing property was divided into nine large guest buildings. Our room, in Building 8 near the main pool, had a modern, beachy and tranquil feel. The design elements featured calming shades of turquoise and light tans.

It had a king bed, large TV with streaming apps (Netflix, Hulu, et al.), a small sitting area with a couch and coffee table and a dining table set.

The space also had a tight but fully outfitted kitchen with two stovetop burners, a tea kettle, coffeemaker, minifridge and microwave. There were also a few complimentary coffee packets and tea bags. The resort offered incoming guests the option to stock their pantries with goodies like chips, macadamia nuts, coffee, juice, beer, wine, liquor and even grocery staples like bread, milk and cereal.

The bathroom was spacious, with a large shower but no tub. It also had a washer and dryer discreetly concealed in its own closet. The toiletries were a coconut-mango scent that was refreshing and tropical. I appreciated the makeup wipes — a product some hotels skimp on.

Our ground-floor room also had a small patio surrounded by greenery. If we craned our necks, we could see a sliver of the blue ocean.

Koloa Landing’s only restaurant, Holoholo Grill, was opened in collaboration with chef Sam Choy, a James Beard Award winner. Initially we were concerned since it's the only restaurant for such a large property, but we didn't have any issues with waiting for a table. It's possible that many guests ate meals off the property since Koloa was so close and provided many options for dining. Everything we tried at Holoholo was delectable and had a distinct Hawaiian vibe to it. My favorite was the fresh poke platter washed down with a house mai tai.

Sometimes the merit of resort food is more about the convenience rather than the quality of the cuisine, but Holoholo Grill had both going for it.

The resort had three pools. There was the gargantuan main pool, which held 350,000 gallons of water, according to the resort website. It had a view of the ocean, grand waterfalls, a waterslide and two hot tubs. It felt appropriate that a property of this size would have a pool so large — not to mention the two other pools available for guests. While we didn't feel as if we had to be the first people at the pool every morning like you would at some resorts, they definitely filled up with guests before noon.

There was also the kids pool and the adults-only quiet pool, which also had its own small hot tub. Although the view of the main pool was striking with its rock formations and surrounding palm trees, I preferred the more secluded adult pool for catching a few rays of sun and enjoying a poolside drink which were delivered promptly by friendly staff members.

Koloa Landing did not have direct beach access. The resort was about a 10-minute walk from Poipu Beach, a popular, lifeguarded public beach where you could catch views of wildlife. We rented snorkel equipment and saw a sea turtle close enough to touch.

We also got to see an endangered Hawaiian monk seal sunning on the beach. There are less than 40 of these seals left on the island, and a government conservationist guarding the one we saw told us Poipu Beach is one of their favorite spots.

Guests could rent beach gear like umbrellas, chairs and snorkels at the resort’s activity hut, but the major downside was beach umbrellas were first come, first served with no return policy. The hut was completely out of beach umbrellas for our entire stay, so we ended up spending precious time searching out an independent rental place to get our beach equipment.

Koloa Landing feels like a total tropical oasis yet is sleek and luxe. You feel like you’re treating yourself when you check in. The resort is in a prime location: Even though you'll have to walk to the beach and spend precious vacation time figuring out a few of those logistics, it’s not far and the beach is worth the walk. The property feels new and upscale and has the convenience of resort amenities, but is done tastefully and isn't at all cheesy.