Art gallery or hotel? DC's Kimpton Banneker Hotel is both 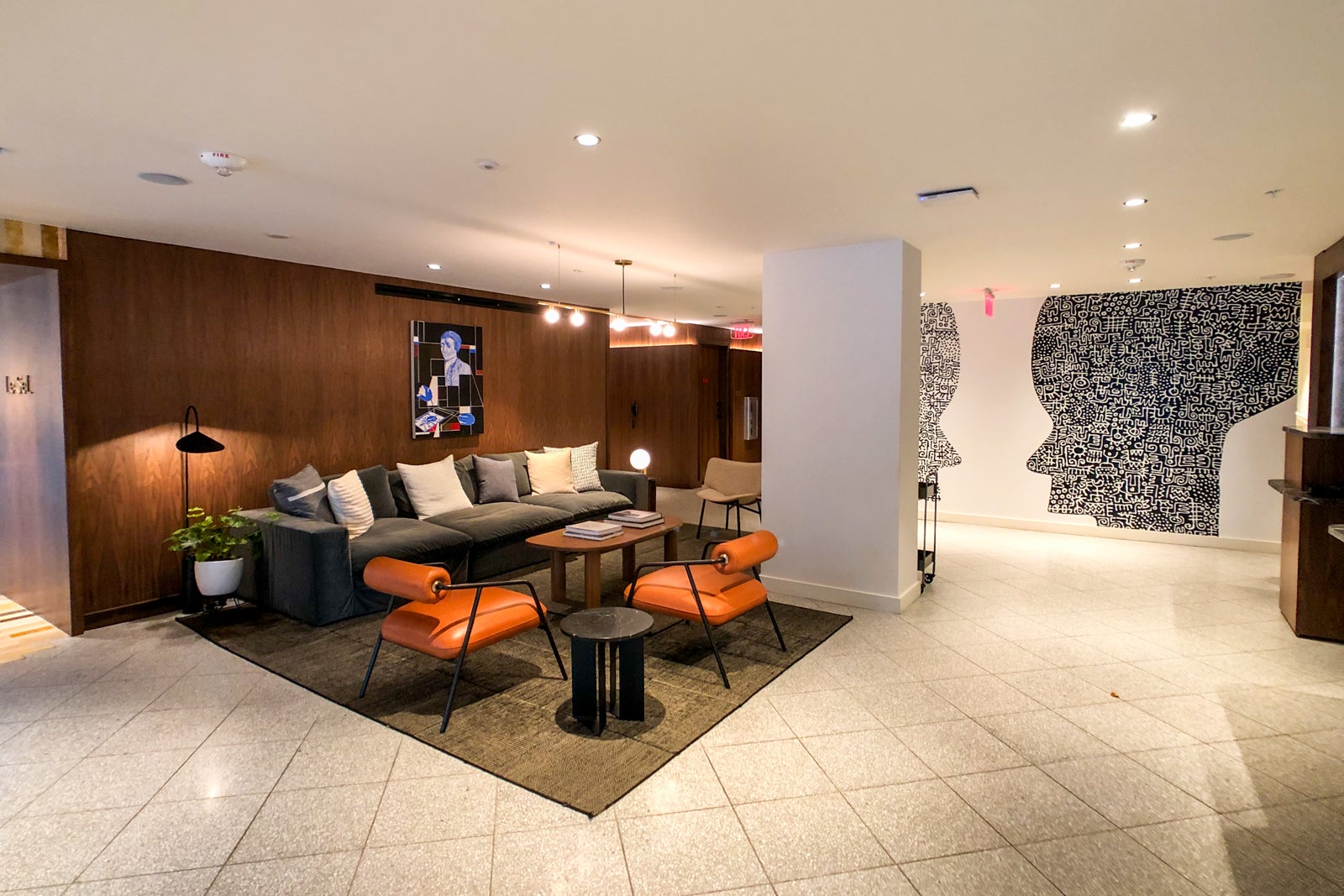 Although 2020 and 2021 were difficult for the hotel industry (along with the rest of us), many exciting new properties opened not just across the country, but around the world, in the past two years.

While I probably won’t be getting to shining stars like The Ritz-Carlton Maldives or the Four Seasons Napa Valley anytime soon, I do always keep an eye out for new hotels to try when traveling.

That’s how I came across the Kimpton Banneker while searching for a place to stay on a recent trip to Washington, D.C.

Formerly the Kimpton Rouge, this Dupont Circle hotel reopened in May 2021 after a $20 million renovation. The name Banneker is a reference to Benjamin Banneker, an African American mathematician and astronomer who helped survey the city in the 18th century as the nation’s new capital was being planned. (Guests can find playful nods to Banneker and his accomplishments in design touches like elevator wall paneling painted with constellations.)

The other reason I settled on the Kimpton Banneker is that, while I’m not a full-throttle IHG loyalist, Kimpton is one of my favorite brands since I often travel with my dog and the chain’s pet-friendly policies make that both easy and affordable. I also carry the IHG Rewards Premier Credit Card, which gives me automatic IHG Platinum Elite status, so I know I can count on perks such as bonus points on stays, the occasional upgrade and late checkout.

With my dates set, I booked a two-night stay at the Kimpton Banneker. Here’s how it measured up.

For my November stay, the Kimpton Banneker was charging rates starting at $225 or 53,500 points per night for the starting room category, a “1 King Essential.” Had I used points, I would have gotten a mere 0.4 cents per point in value, slightly below TPG’s current valuation of IHG points at 0.5 cents each.

The hotel tacked on a nightly amenity fee of $28.74 that includes:

Including other taxes, my total came to $567.94 for both nights. Taxes are one thing, but nearly $30 per night for Wi-Fi and phone calls (I didn’t get the chance to use car service, but the radius for which it was available made it unnecessary) seemed ridiculous to me.

At least I was upgraded one room category to a larger “1 King Premium” room, which would have cost $16 more per night.

The Kimpton Banneker is located between Dupont Circle and Logan Circle, which means it’s pretty central to whatever you want to do in town, whether it’s visiting national museums and monuments, attending a convention, embassy-hopping for special events or simply meeting up with friends in the trendy bars and restaurants along nearby 14th Street.

If you do bring your dog along, you can head to the nearby S Street dog park just a few blocks away.

The nearest Metro stations are Dupont Circle and Farragut North on the Red Line, and Farragut West on the Blue, Orange and Silver lines.

From Washington National Airport (DCA), I took the Blue Line to Farragut West, which cost $2.40 and took around 20 minutes, then walked the last half-mile to the hotel.

Situated in the midst of some of D.C.’s most upscale neighborhoods, and with just 144 rooms and suites, the 10-story Kimpton Banneker feels like a fashionable apartment building crossed with an up-and-coming art gallery.

The public spaces are small, but cozy seating areas littered with art books as well as dozens of eye-catching works by local artists on the walls all give the lobby an intimate, lived-in feel. Among the masterpieces on display is Nigerian American artist Victor Ekpuk’s “You Be Me, I Be You,” a striking double silhouette with intricately detailed patterns inspired by the indigenous Nigerian writing system of nsibidi.

Annie Broderick’s “Blue Corset” is a whorl of sumptuous, royal blue silk velvet pinned on the wall behind reception. Susana Raab’s documentary photographs highlight both whimsical and quotidian moments in the lives of those who live in D.C.’s Anacostia River communities.

While you might not see the capital’s power brokers dropping by for glad-handing sessions with donors and lobbyists, you’ll probably run into a networking cocktail party or two at the rooftop bar … as well as a few friendly pooches enjoying complimentary morning coffee or the 5 p.m. wine hour along with their owners (the hotel has dedicated floors for travelers with pets and will provide water bowls and bags for cleaning up after pups).

Though not exactly memorable, my King Premier room felt positively massive at over 415 square feet. Windows took up most of the exterior wall for plenty of natural light, but also unobstructed views of a huge, noisy construction site across the street where work (read: jackhammering) began before 8 a.m. both days I was there.

The slightly curved sectional and black-glass coffee table provided a comfortable workspace — which was a good thing considering the stone-topped desk and its velvet-upholstered chair were crammed into a constricted space behind the bed, along with the minuscule closet and the (empty) minibar. There was, however, a plethora of plugs and USB ports at the desk and beside the bed for charging any and every device you might have with you.

The bathroom was spacious and simply appointed, with a large marble countertop and single sink, a green-tiled walk-in shower stocked with Atelier Bloem products, and a semiprivate area for the toilet overlooked by a Magritte-like photo-textile hybrid print by artist Jose Romussi.

Adjacent to the lobby, the main restaurant, Le Sel, is a playful take on the classic French bistro, with an intricately tiled floor, a welcoming wooden bar at the far end and both indoor and outdoor seating along accordion windows that open to the sidewalk.

Among the seating options are two-tops lining a voluptuous leather banquette and four-tops surrounded by wood-and-wicker chairs – we had our pick the night we came since we were the only diners.

Lunch was not being served while I was there, but the dinner menu comprised the greatest hits of casual French cuisine along with more Mediterranean flavors, including onion soup with a bubbly Emmental topper ($14); heirloom tomato carpaccio with burrata and Castelvetrano olives ($15); seared diver scallops with eggplant caviar, preserved lemon and fava beans ($38); and, for dessert, a Madagascar vanilla creme brulee ($12).

The rooftop bar, Lady Bird, is also an indoor-outdoor amalgam, though the doors opening to the expansive outdoor deck — with its skyline views and flickering fire pits — meant the garden-like indoor area with tropical-themed decor was freezing the night we visited.

Small plates included the ho-hum baba ghanoush with crudites ($12), bland chicken skewers with olive chimichurri ($14), and doughy goat cheese and cornmeal beignets with a honey drizzle ($14). In short: Skip the food and come for innovative libations instead, like a savory cocktail called & The Bees with Dolin Blanc vermouth, honey, orange bitters and liquid smoke ($15); or the frothy Banneker’s Balcony with whiskey, toasted coconut milk, allspice, Demerara, lemon and egg white ($17).

Part of what sets Kimpton apart as a brand is its value-added amenities, like bikes that guests can borrow to pedal around the city, complimentary morning coffee and evening wine hour in the lobby (California sauvignon blanc and pinot noir, in this case) and, of course, the fact that you can bring your pet along without worrying about fees or deposits.

As you might expect from a small city hotel like this, though, the Banneker’s other amenities were limited to a small fitness center off the lobby that contained a handful of treadmills, ellipticals, weights and a single Peloton bike (guest rooms also contain yoga mats).

Every member of staff I interacted with was incredibly friendly and warm, from the servers in Le Sel and Lady Bird, who were always on hand (but not domineering), to the front desk agent who printed out a compendium of notes on the hotel’s art collection when I asked about a few works. In short, they made me glad that I’d chosen to visit this particular hotel.

The Kimpton Banneker has taken a number of accessibility features into account, including specially designed rooms, accessible entrances and pathways to and throughout the public areas, and a variety of amenities available upon request such as telephone visual alerts, door knock alerts and in-line telephone amplifiers.

Those with service animals might also choose to stay here over other hotels thanks to Kimpton’s animal-friendly policies.

The Kimpton Banneker has a lot going for it, including a distinctive focus on American artists and an excellent location that should suit both business and leisure travelers.

The reasonable paid (but not points) rates and commodious accommodations are two more factors in its favor. However, the hotel should warn guests in rooms facing 16th Street about the construction noise. It should also drop the bogus amenity fee altogether.

That said, if you’re looking for an upscale option in D.C. but can’t afford the city’s higher-end luxury hotels, the Kimpton Banneker is a solid choice and one I would visit again.