My Christmas Miracle: El Al (787-9) in Economy From New York to Tel Aviv

Articles
Isabelle Raphael is TPG's Creative Director and the master of the always scoring the middle seat (Economy) on the long flights back to her hometown of Sydney, Australia.
Follow
Jan. 17, 2019
•
12 min read 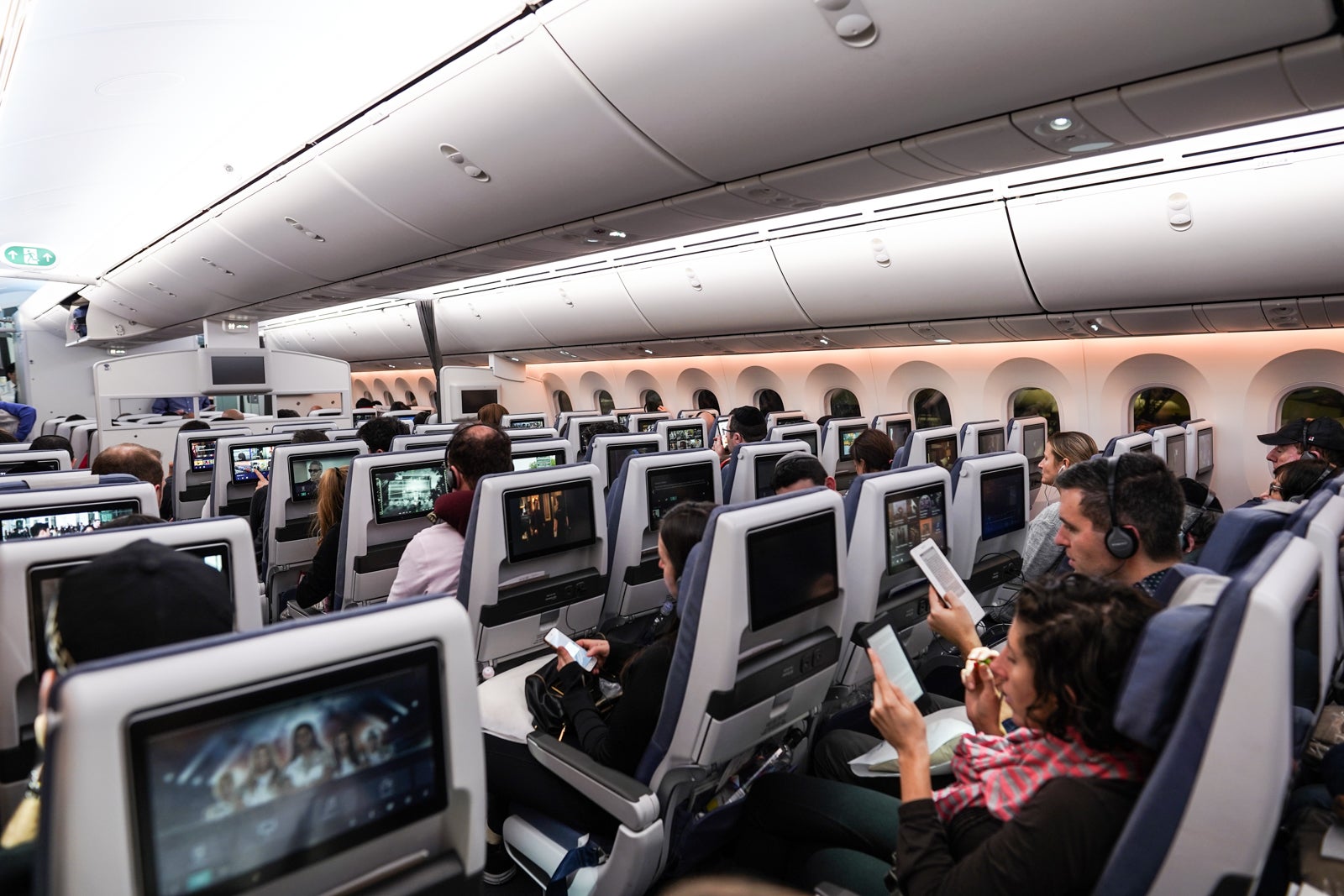 My Christmas Miracle: El Al (787-9) in Economy From New York to Tel Aviv
This post contains references to products from one or more of our advertisers. We may receive compensation when you click on links to those products. Terms apply to the offers listed on this page. For an explanation of our Advertising Policy, visit this page.

As The Points Guy himself likes to say, Christmas Day is the best day to travel: cheaper tickets, shorter lines, fewer crowds. With this conventional wisdom in mind, I booked a trip to Israel, departing on Christmas Day -- just another day for a Jewish gal like me. Turns out, though, a lot of other folks had the same idea, so my dream of a stress-free airport experience were quickly dashed. Oh, and the ticket wasn't cheap either.

It wasn't all bad news, though. I'm not really an #AvGeek, but plenty in the office are, so they had me excited for what would be my first-ever TPG flight review -- El Al's 787 (in economy) on an overnight flight from New York to Tel Aviv.

Though there are occasional deals, flights to Israel are rarely available at the sub-$400 level like you'll find for round-trip ticket to Europe on the regular. Booking just a few days before departure, we paid a total of $1,690 for my round-trip flight with The Platinum Card® from American Express in order to earn 5x points on the purchase. In this case, we earned a total of 8,450 points, which are worth about $161 according to TPG's current valuations.

It is possible to redeem points for El Al flights, but the carrier's Matmid program is somewhat complicated. American Express is a transfer partner, but the ratio isn't great — 1,000 Membership Rewards points yields just 20 Matmid points, and a round-trip economy flight between New York and Tel Aviv requires 1,400 Matmid points in the off season, which is when I was traveling. This meant that a round-trip ticket in coach would cost 70,000 Membership Rewards points. Considering the price of the ticket, this could have been a good use of MR points, but we wanted to save them for a more valuable premium redemption, so we paid cash instead.

While much of the city was gathered with their families celebrating Christmas, I was busy packing at the last minute for my trip. Finally, I was JFK-bound, with two and a half hours to spare before departure, expecting to luxuriate in the Wingtips Lounge and indulge in its selection of Brooklyn beers. But no, no, no, the crowds were out in full force at the El Al counter — clearly, there wasn't going to be much time for luxuriating.

I forgot about the security questioning (it's a standard practice, but it'd been a while since I'd flown the airline) involved with El Al flights to Israel — another hurdle at the airport that took up crucial beer drinking time. But, little did they know when they asked me about my rabbi’s name, my Hebrew name (can’t remember) and what I did on the last High Holidays, that I just love to chat, and I was more than happy to regale the attendants about my stories of when I lived in Israel in 2001. When they worked out that they had a "talker" on their hands, they pushed me along to drop off my one piece of luggage pretty quickly.

When I arrived at the check-in desk, I inquired about changing my middle seat, which I was told was not possible, as we had a full flight. Sad. Also sad: I don't have Global Entry or TSA PreCheck. These perks only come in handy if you're an American citizen (or citizen of a select few other countries) or Green Card holder, so as an Australian who can’t remember her Hebrew name, I was all out of luck. I made my way to the security line, and found that it wasn't too long. I was through in less than 10 minutes (give or take 15 minutes).

I beelined it to the Wingtips Lounge excitedly. This was going to be my first lounge experience as a newly minted member of Priority Pass. But no Christmas miracles for li'l ol' me. The lounge was full, and I had to wait an hour to get in. No Coney Island beer is not worth an hour wait, period.

That was rather disappointing, as was my tasteless Pho at Five Boroughs Market that I "treated" myself to as my Christmas meal.

I got to the gate with five minutes to spare before the scheduled boarding time, but the excited El Al 787-9 Dreamliner (in the airline's retro livery!) apparently couldn't wait to get its trip on, so boarding was already underway. We left the gate four minutes before the scheduled time but sat on the taxiway, so in the end it was a 20-minute delay.

The Dreamliner, which sat 222 in economy in a 3-3-3 arrangement, was in good condition and felt very new. It was delivered new to El Al in July 2018, which made it only about five months old when I flew on it. El Al brought its Dreamliner to Newark (EWR) first, which left the JFK-TLV route with much older Boeing 777s and 747-400s. In July, though, the Dreamliner took over the earlier departure from JFK (LY 2), while the later flight (LY 8) still sees the 747.

The seats were covered in an attractive blue fabric with contrasting details -- it's the little things in coach that make it feel not so ... coach-y...

Each seat featured a large and modern IFE screen as well as power outlets and USB ports -- necessary (and appreciated) amenities for long-haul travel these days.

Each seat was about 17 inches wide, reclined five inches and offered 31 inches of pitch. For me (so small, so dainty), the legroom was adequate but for the long-limbed folks, it could be a little tight.

Adjustable headrests made getting comfortable a little bit easier -- the sides were movable, but these definitely did not keep my head from slipping and sliding all over the place.

My 15-inch laptop didn’t quite fit on the tray table with the screen up and the person in front of me reclined.

There were four lavatories in the economy cabin, and there was toilet paper over the floor after hour two. Delightful.

As it was my first time on the Dreamliner, I enjoyed watching the windows gently turn from from black to purple as we flew across the ocean, rather than the usual blasts of light from people yanking shades up and down. The jury is still out on how the mood lighting affected my jet lag.

When sitting in coach on an overnight flight, you know you're not going to sleep great, so the best you can hope for is enough movies and TV shows to keep you entertained while you pass the time. El Al definitely delivered here -- highlights were the 12-inch screens, convenient power outlets and USB ports, the wide selection of movies (143 of them) and — jackpot! — free headphones (it’s the small things in life when you are stuck in a middle seat for 10 hours).

My Israeli seatmate was particularly impressed with the selection of arthouse and cult-classic Israeli films (I may have guiltily picked a Jennifer Garner rom-com instead, but I liked knowing I had the option to watch from a selection of films that would put the Criterion Collection to shame).

Oh, and what’s this? Free Wi-Fi? Don’t mind if I do! It was pretty fast, too -- I was able to get some work done before attempting to sleep for the night.

Meal service began with complimentary snacks and drinks. I ate dry mini bagels and had a rather small glass of Barkan shiraz, which was not bad for kosher wine, but it was Christmas Day — top a lady up! (I was not offered a top-up.)

Dinner came fast, and as on most El Al flights, there were more special meals than normal meals, so those of us who forgot to put in our special orders were offered chicken or beef meatballs. I peeked enviously at my seatmate's vegetarian dal, but, no lie, the nonveg food was not too bad.

Disclaimer: I am someone who always packs my own food on planes, not because I am on a strict diet (need to add that to my New Year's resolution, but I digress) but because I Hate (with a capital H) plane food. Granted, I have only flown economy, so maybe all those premium-class people know something I don’t, but economy food is not something I need in my life.

With that said, I mildly enjoyed my semi-fluffy pita with a healthy ramekin of hummus (better than Sabra, but no Abu Hasan), and the couscous and beef meatballs weren’t awful at all -- in fact, they were pretty good! The small green salad was as to be expected, and the chocolate cake was mildly moist.

With an hour and 40 minutes left in the flight, we were served a complimentary breakfast fit for an Israeli king: two blintzes with fruit compote with a side of mozzarella and tomatoes, fresh fruit, a bagel with cream cheese and yogurt and granola and a very strong coffee. (I could have used this generosity on the wine pour the night before.)

I inhaled the blintz despite my meek protests to my seatmate that "I couldn’t possibly eat anything right now." Had this El Al flight turned me into a plane-food eater? There are Christmas miracles after all!

The flight attendants were friendly enough, in the little interaction I had with them. Nothing about the service really stuck out to me, but I did ask if they could refill my water bottle, and they politely obliged -- to me that's a sign of a friendly FA, especially in coach. Then again, I've never flown up front on a long-haul flight so my expectations are pretty low.

It was a long flight, I was in economy in a middle seat, and at the start of my journey, things weren’t looking great for me. But El Al's 787-9 provided everything I could want in a flight under those circumstances: on-time arrival (we made up time in the air despite the 20-minute delay at JFK), free Wi-Fi, edible and dare I say somewhat tasty free food, TV screens bigger than my thumbnail, and power and USB ports. I’m a simple woman with simple needs, and this flight exceeded my expectations -- I won't hesitate to fly El Al's Dreamliners again.