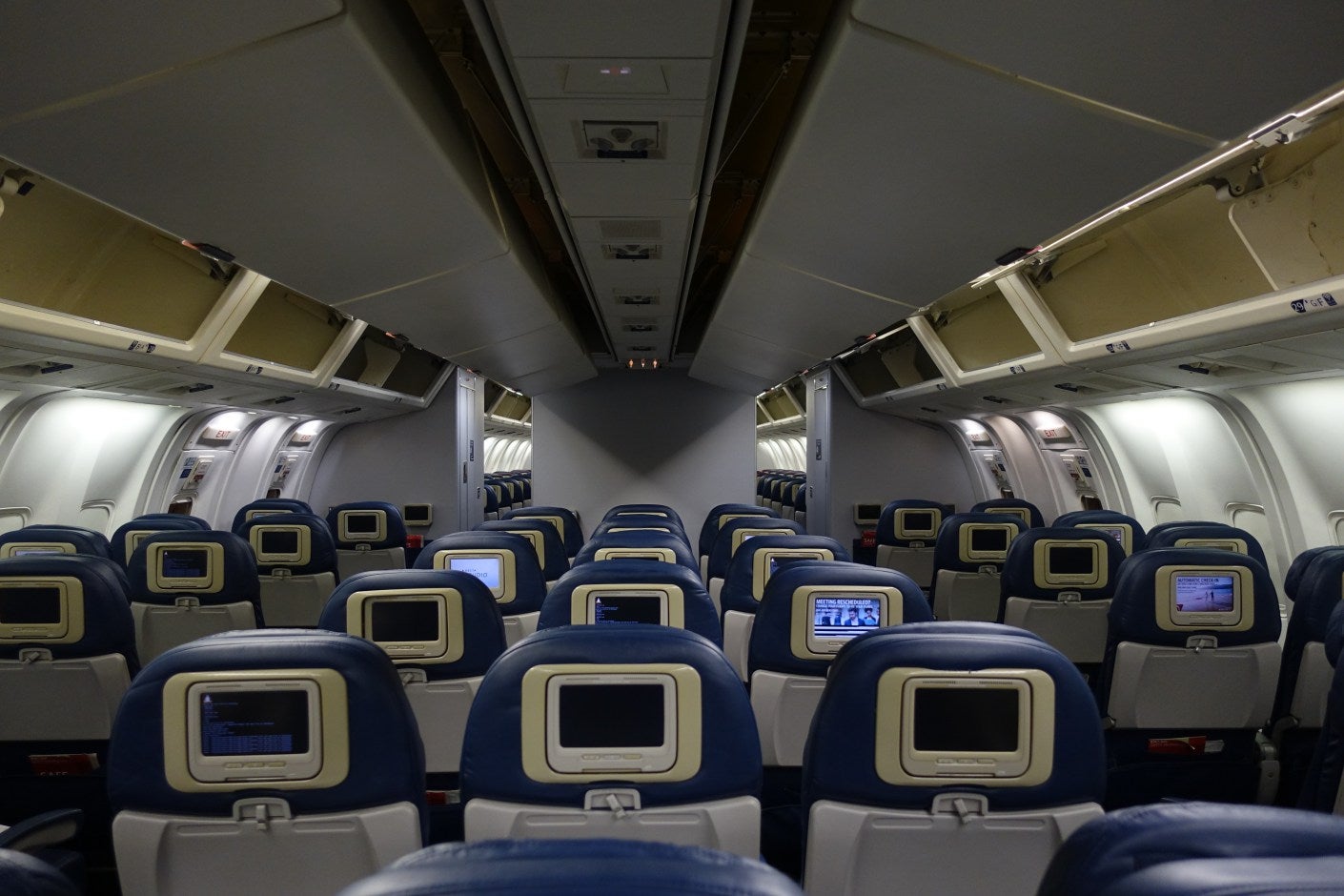 After spending seven days in Oahu and Lanai, it was time for me to fly home. (Sad!)

With rapidly expanding networks connecting the Hawaiian Islands with the continental US, travelers have a tough choice to make when it comes to flying to and from Oahu. Travelers can choose from a variety of carriers including American, Alaska, Delta, Hawaiian and United. When I had to make my way back to NYC from Honolulu, I chose Delta, which offers 767 service between HNL and its hub in Salt Lake City (SLC), among several other hubs. From there, I connected to the final leg of my journey to New York-JFK.

I began my search for a flight home on Google Flights, which led me to this Delta flight. The timing worked perfectly for me, and prices on all airlines were more or less equal, so I booked this $620 flight with The Platinum Card® from American Express in order to take advantage of the card's 5x bonus category on flights purchased directly with the airline. I earned a total of 3,100 American Express Membership Rewards points, worth about $60 according to TPG's most recent valuations. Since this was a paid fare, I also earned SkyMiles for my trip — in this case, I walked away with 4,983 MQMs, $568 MQDs and 2,840 redeemable miles.

I checked in for my flight home from Hawaii online so I could spend as much time as possible sitting poolside before making my way to the airport. When I arrived at Terminal 2 in Daniel K. Inouye International Airport, it seemed relatively empty.

But the TSA PreCheck line was closed at the security checkpoint nearest the Delta check-in desk. And there wasn’t one open in the next lobby, either. Two lobbies over, there was a PreCheck line open, and I was there along with everyone else with PreCheck and, it seemed, most other travelers. The PreCheck line moved pretty quickly, and I was through in approximately 10 minutes without any hiccups. But if you don’t have PreCheck, you should leave yourself extra time to get through security, if the snaking line of travelers I saw was any indication.

Let me be transparent here: For someone in the travel industry, I have a pretty terrible sense of direction. I found my gate, E1, with relative ease, but couldn’t locate the Delta Sky Club for the life of me. I ended up wandering around on the garden level, having followed a vague sign for “airline lounges” including Korean Air and Qantas Airways.

I was near to giving up — I didn’t have all that much time before my flight started boarding — when I decided to head back to the security checkpoint and look around the other corner instead. Of course, there it was, just a minute or two from where I’d started. I only bring up my difficulty finding the lounge because, unless you’re already heading in the right direction, there’s no signage indicating where you should go.

I had access with my Delta boarding pass and The Platinum Card® from American Express. I thought it was a surprisingly spacious lounge, with plenty of seating, hot and cold food, snacks and a full, tended bar.

My only complaint was that none of the hot foods were labeled.

I put together a little salad and got to work while I waited for my flight. Then, a staff member came around with a silver bar cart loaded with wine, sparkling wine, cheeses, crackers and nuts. There began what I can only guess must be a massive conspiracy by Delta to ensure travelers sleep through the HNL-to-SLC red-eye.

After visiting the Sky Club, I made my way to the gate about 15 minutes before the scheduled boarding time. I asked if I could board a few minutes early so I could get photos of the cabin without a full load of passengers on board. The boarding area was already packed, with a solid crowd (and an alarming number of small children) around the gate agent's desk, so I was glad I did.

Though boarding seemed to take longer than usual, we still managed to take off four minutes early. Though I’ve heard this is especially true of interisland flights, perhaps the same can be said of any flight leaving HNL: You don’t want to be late to these flights, because they will take off as early as possible and gladly leave without you.

My Boeing 767 sported a rare configuration for Delta — it had 30 recliner seats in first class, 35 Delta Comfort+ seats, and 196 standard economy seats.

All of Delta’s 767-300’s have a relatively roomy 2-3-2 configuration (each seat offers 17.9 inches of width and between 31 and 32 inches of pitch) in economy, but you'll still definitely want to do your best to score a window seat or an aisle seat in one of the coupled seats along the cabin wall.

Fortunately, I had an aisle seat, 36F, on the exterior aisle.

In addition to flying back to the mainland, I also felt like I was about to travel back in time in this 25-year-old 767-300 (registration N140LL). The 767 is certainly the workhorse of Delta's widebody fleet, and while a good portion of them have fully modern interiors, this particular bird certainly did not.

As my colleague, a Delta loyalist postulated, the airline seems to be banking on the fact that travelers will quickly forgive and forget the shabby interiors after landing in Hawaii. And on the return red-eye home, it's counting on travelers snoozing for the duration of the trip.

This plane had old-school inflight entertainment systems with touchscreen technology that seemed like it was from the early 2000s. The leather around my IFE was fraying, and there were no outlets or USB chargers. It was pretty bare-bones, and it was noticeable for someone who tried her hardest to stay conscious for the entire five-hour, 44-minute-long flight.

The cabin itself felt spacious, due in part to the almost coffered ceiling. But the overhead storage bins were incredibly shallow — another sign of this aircraft's age. My carry-on rollaboard had to go in horizontally, which is one of my greatest travel pet peeves.

It wasn’t all bad though. My absolute favorite thing about this aircraft was the seatback pocket, which had two separate compartments and was big enough to easily accommodate my laptop, book, camera, water bottle and phone.

I don’t know if that says more about me and how much stuff I try to cram in those seatback pockets, or how totally underwhelming the airplane was. Maybe both. You decide.

Flight attendants wearing Delta's new Passport Plum-colored uniforms (including a select few accessorizing with Hawaiian orchids or kukui nut leis) almost immediately passed out earbuds, which I’m increasingly thankful for when traveling, now that Apple has made my usual headphones incompatible with every airplane ever built.

Each seat also had a surprisingly fluffy pillow and a threadbare blue blanket that felt more like a hospital gown than a cozy comforter. But it was certainly better than nothing, as the plane was kept at a subarctic temperature the entire time. I was actually grateful I left Hawaii with a slight sunburn.

And those seatback pockets? Stocked with the typical safety card and latest issue of Delta Sky magazine.

The seatback IFE worked, but just barely. I had to push the screen hard, repeatedly, to get it to respond (I accidentally pressed the flight attendant call button half a dozen times trying to turn my reading light off). I still do really appreciate airlines that offer seatback entertainment, however.

In addition to controlling the overhead light and operating as a call button, the IFE did also offer a host of television shows and film through Delta Studio. The child across from me seemed delighted to have found “A Wrinkle in Time” on the screen, and the airline is currently offering a number of other grown-up flicks including “Tag” and “Ocean’s 8.”

I stuck with the flight map this time, though it basically served to remind me just how long I’d have to wait before I had so much as a wink of inflight internet. That’s because, even though the airline advertised Gogo inflight Wi-Fi, it didn’t work until we were just off the coast of California, with about an hour and a half remaining. If you’re counting on that flight home to work, as I was, think again.

The bathrooms were kept very clean, and had foaming soap apparently meant to "calm" travelers. But I actually found this lav to be less cramped then some of the newer airplane restrooms.

The food and beverage service was delayed by turbulence after takeoff, but ultimately flight attendants came by with complimentary soft beverages and an option of snacks: pretzels, KIND granola bars and the airline’s iconic Biscoff cookies.

Delta does indeed offer complimentary meals and alcohol on its "long-haul flights to Honolulu," though it evidently doesn't consider SLC to be a long-haul flight, as I received regular old snack service.

Another drink service followed later in the flight, but at that point I had given up. With no Wi-Fi and no power, I did exactly what Delta had hoped I’d do: napped.

Early on, a flight attendant came over the intercom and asked that travelers in the window seat shut the shade to help travelers sleep. The lights were dimmed immediately. Sure, it's a red-eye flight, and many travelers are in fact trying to sleep. But it also disguised the fact that the cabin is sorely in need of a refresh. Though my flight was ahead of schedule and the flight attendants were amiable, Delta advertised a service (Wi-Fi) and only offered it for the final 90 minutes of the flight. Still charging the full price, of course.

If I were flying for leisure and not trying to get work done, I would say this is an easy way to get home from Hawaii. The nonstop flights back to the East Coast are brutal, and I was more than glad to stretch my legs — and grab a complimentary breakfast from the Sky Club — when we landed in Salt Lake City.