World Airways Reveals Its New Brand — But Will It Fly? 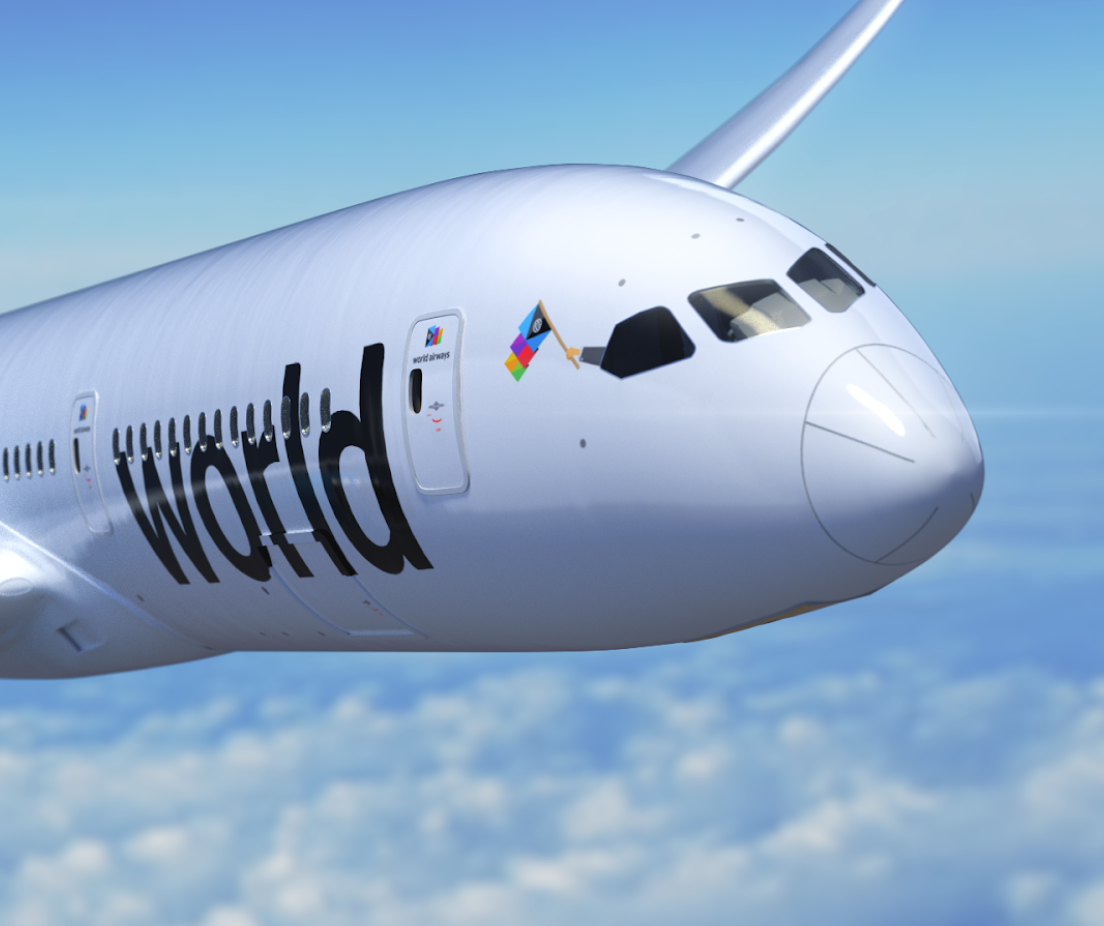 World Airways Reveals Its New Brand — But Will It Fly?
This post contains references to products from one or more of our advertisers. We may receive compensation when you click on links to those products. Terms apply to the offers listed on this page. For an explanation of our Advertising Policy, visit this page.

The airline industry's dalliance with reintroducing nostalgia brands has been largely a bust so far. Storied airline names from the past like Braniff, Eastern, Pan Am, National, and People Express have been welcomed back with copious amounts of hype, only to expire quickly. In the US, the relaunched Frontier Airlines brand name has been one of the few successful reboots.

So it came as bit of a surprise that the next name to be resurrected from the vaults of aviation history would be a much lesser-known airline, World Airways. In November of last year, venture capital firm 777 Partners announced it had acquired the intellectual property of World Airways, and would launch as the first long-haul low cost carrier (LCC) based in the United States. No timeline was given, but a few details emerged.

The airline will be based in Miami, Florida with initial operations from Los Angeles to Asia and Miami to Latin America, and perhaps Europe. A cornerstone of the airline's strategy is to operate very fuel-efficient, modern twin-aisle aircraft. Originally the business model relied heavily on a fleet of secondhand 787-8s, which has proven to be more difficult than originally thought, so perhaps the Airbus A330neo or late-model A330s might be an option. There was even talk of interim 777 leases. Beyond that, the company has been mum. At this point, we don't know when the airline will start flying or open bookings to the public.

Last week, in advance of the launch of World's new logo and website, I was given exclusive access to the rollout of the entire brand in an interview with acting Chief Marketing Officer and Brand Architect Freddie Laker, a founding partner of consultancy firm Chameleon Collective. The airline industry runs in his blood — literally. If his name sounds familiar, that's because it is: his father Sir Freddie Laker's Skytrain pioneered long-haul low-cost widebody flying across the North Atlantic back in the 1970s. Unlike other low-budget airlines of that time, it ordered a brand-new widebody aircraft, the DC-10. Initially successful with passengers and investors alike, Laker's Skytrain ultimately failed in 1982 due to predatory competitive moves from British Airways, a severe economic recession, overexpansion, and the lingering effects of the DC-10 grounding in 1979. Still, his name remains legendary in the aviation industry.

Together, Laker and Chameleon Collective's Ari Merkin created a new brand for World that bears no resemblance to that of the original World Airways. "We don't have any of the same people or the same business model so it is important that we set our own path," Laker said.

So why would an airline targeted to a new kind of traveler, chose to revive an old name that has very little brand equity, much less awareness with today's traveling public? The original World Airways was founded in 1947 in Oakland, California, and for most of its existence was "a profitable supplemental carrier, known mostly for international leisure and military charter work," said airline analyst and consultant Robert W. Mann.

It gained fame when it operated the last airlift out of Da Nang, Vietnam, at the tail end of the Vietnam War in 1975, with CEO and founder Ed Daly literally fending off refugees trying to board the airplane. In the years following the Vietnam War, the airline began to look to other revenue sources. Indeed, for a short time in the early 1980s, the Oakland-based carrier unsuccessfully tried to operate long-haul, low-cost scheduled services to Asia and Europe using 747s and DC-10s.

After this ill-fated experiment and the death of the legendary Daly, the airline bounced around from owner to owner and base to base. Its last iteration was as a small charter carrier based in Peachtree City, Georgia, operating a small fleet of MD-11s and 747-400Fs. It succumbed in relative obscurity in March 2014.

But that legacy is not an issue for Laker. "I think the nice thing about World is it just sounds like a big global airline," he said. "And If you're going to be a global airline, we don't think you can have a much better name than World Airways." The name may even be an asset: "It has one of those names that just feels familiar. For that reason, it could actually be more valuable than some of these retro reboots like a Pan Am or an Eastern or whatever."

The flag logo, designed by Ari Merkin, projects in Laker's words "a really light, happy, and optimistic look. We used the term celebratory at one point so we can kind of celebrate our differences and then unify them together in this one brand."

But what's the viability of a new entrant in the long haul, LCC space? "There is certainly a chance a US-based long-haul LCC could be successful. The US aviation market is one of the largest in the world and continues to grow. At the same time, however, fuel costs are up significantly over when this idea was first announced, and the LCCs arguably are more exposed to such fluctuations," said aviation analyst Seth Miller, publisher of the widely read blog PaxEx Aero. "Getting into the business now, with competition blossoming from all sides, is a tough sale."

Former senior airline marketing executive Henry Harteveldt, now an aviation analyst and founder of Atmosphere Research, noted that "the long-haul, low-cost model has not yet proven itself to be financially successful. There are many reasons for this. Serving the wrong markets, operating the wrong aircraft, picking the wrong airports in the communities they do serve, overestimating consumer demand, poor pricing and revenue management, higher costs than anticipated, and inadequate marketing are just a few. That’s not to say it can’t be done, but World will have to develop the right go-to-market strategy."

The legacy airlines have taken notice and are competing head-on, offering basic economy fares. Legacies such as Singapore, Qantas, IAG, Air France - KLM and Lufthansa have created their own LCC offshoots: Scoot, JetStar, Level, Joon, and Eurowings respectively. These too, have met with varying levels of success, though their parent companies have more resources to backstop them.

So what's the business case and differentiator for World, besides being based in America? True, World's initial rumored nonstop markets don't have much long-haul LCC competition — yet. From South Florida, Azul operates long-haul LCC flights to Brazil while Air Asia X, Scoot, and Jet Star have expanded to Hawaii, and may eventually serve California.

"I’m both surprised and concerned that World plans to start at two of the most expensive, most competitive US airports," Harteveldt said. "Miami lacks long-haul, low-cost service, but now that it has basic economy, American, Miami’s largest carrier, will undoubtedly match World’s fares. Plus, American will have the benefit of massive domestic feed at Miami, something World will lack. Alaska, American, Delta, Southwest, and United are all engaged in a fierce fight at LAX. Plus, the three alliances (oneworld, SKyTeam, and Star Alliance) each have a substantial presence at that airport."

Laker is undaunted. "When you're a legacy carrier, you're trying to reinvent all of these platforms (...) we have a lot of opportunities to just start fresh and not have to worry about these legacy systems. In many cases we leverage great off-the-shelf systems that are out there that will serve our needs and not force us to go into multi-year development cycles and things like that."

The plans we've seen do look quite different from anything out there today, from a brand and passenger experience standpoint. What the airline is willing to reveal at this time is that, for passengers, every experience of the journey from booking to boarding to arrival revolves around multiple touch points on their smartphones. Seatback power at every seat and and high-speed Wi-Fi connectivity are part of the experience, and Laker said the airline will employ technology like Facebook's Messenger Chatbot as "a way to drive down costs, and then that allows us to stick to our promise of ultra-low fares."

"We'll differentiate ourselves through quality of service. On a lot of ultra low cost carriers, you feel like you have to sacrifice a lot of things in exchange for low cost fares," Laker said. "You may have even seen a lot of that happen with Spirit over the last, in years past. And I think they're a good example of an airline, that realized that when their reputation suffered so badly that they had to get really serious about brand in the last couple of years."

Chris Sloan is an aviation journalist and lifelong AvGeek based in South Florida, where he is managing editor of Airways Magazine.

Featured image by A teaser CGI generated image of a World Airways aircraft, in this case a 787 . The illustrated pilot's hand flying the World flag is a cool, quirky touch. The LCC's business model ultimately revolves around sourcing modern, fuel-efficient equipment such as the 787 or A330neo. Image Courtesy: World Airways