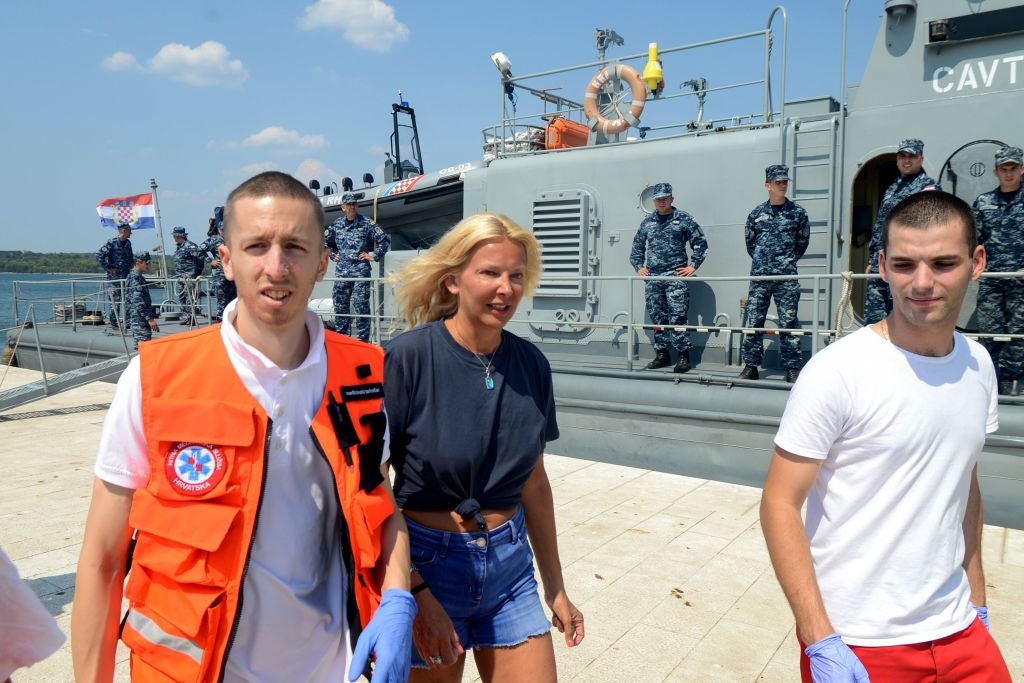 UK Woman Survives 10 Hours in Sea After Falling off Cruise Ship
This post contains references to products from one or more of our advertisers. We may receive compensation when you click on links to those products. Terms apply to the offers listed on this page. For an explanation of our Advertising Policy, visit this page.

A woman from the United Kingdom was rescued from the Adriatic Sea over the weekend after falling off a Norwegian Cruise Liner ship and spending 10 hours in open water in the middle of the night.

Authorities say 46-year-old Kay Longstaff fell off the cruise line's Norwegian Star ship about 60 miles off the coast of Croatia just before midnight on Saturday as the ship sailed to Venice, Italy. The ship's crew issued an emergency alert and began a search-and-rescue operation, along with the Croatian Coast Guard, civilian vessels and even a PC-9 aircraft, The Guardian reports.

The Croatian Coast Guard's rescue teams spotted Longstaff at about 9:40am Saturday and were able to send a swimmer to reach her and pull her on board a patrol boat. She was reportedly about a mile away from the spot where she fell in, which crew were able to pinpoint by reviewing the ship's CCTV. Because the crew could see the time Longstaff fell in on the video, they were able to determine the precise position of the ship, Croatian officials said.

The fact that Longstaff was able to survive 10 hours in the open sea is a feat of strength. The waters of the Adriatic Sea are on the warmer side, but exhaustion and overexposure are still quick to set in. In August, the average temperature of the Adriatic near Croatia is about 80 degrees Fahrenheit. In water of 70-80 degrees Fahrenheit, the average person has three to 12 hours before exhaustion and unconsciousness set in, making the expected survival time anywhere from just three hours to an indefinite amount of time, depending on the person's athletic ability and mental state in the water.

Reportedly, Longstaff told her rescuers that "the fact that she practices yoga helped her as she was fit," an unidentified rescue swimmer told the Sun. "And she said she was singing to not feel cold in the sea overnight.”

Experts say that staying calm is one of the most important parts of surviving a fall into open water. When someone falls into water, they get a cold shock response, which leads to uncontrollable breathing and intensified work for your heart. The natural reaction might be to thrash and swim hard, but that could quickly kill someone in open water.

“Although it’s counterintuitive, the best immediate course of action in that situation is to fight your instinct and try to float or rest, just for a short time,” Mike Tipton, professor at Portsmouth University and author of “Essentials of Sea Survival” says. “The effects of cold water shock will pass quite quickly, within 60 to 90 seconds. Floating for this short time will let you regain control of your breathing and your survival chances will greatly increase.”

From there, experts say staying as still as possible in the water and keeping a positive mental attitude, as Longstaff did with her singing, greatly increase the odds of survival.

It is still not exactly clear how Longstaff fell overboard. “I was sitting at the back of the deck and, yeah... it was bad,” she told Croatian media before boarding an ambulance after being rescued. "I am very lucky to be alive," Longstaff said. "I fell off the back of the Norwegian Star, and I was in the water for 10 hours, so these wonderful guys rescued me."

“On the morning of 19 August a guest went overboard as Norwegian Star made her way to Venice," a Norwegian Cruise Line spokesperson told The Guardian. "The coastguard was notified and a search and rescue operation ensued."

“We are pleased to advise that the guest was found alive, is currently in stable condition and has been taken ashore in Croatia for further treatment," the statement continued. "We are very happy that the individual, who is a UK resident, is now safe and will soon be reunited with friends and family.”

TPG reached out to Norwegian for more information, but did not receive a response by time of publication.

Longstaff's fall on Saturday is the second overboard incident for Norwegian Cruise Line in as many months. Back in July, a 33-year-old unidentified male employee with the cruise line fell off Norwegian's Getaway ship off the coast of Cuba. He survived a whopping 22 hours in the waters off Cuba before another company, Carnival Cruise Lines, happened to find him in the sea and execute a rescue that the cruise line's president said was "nothing short of miraculous."

In March, another female Norwegian passenger fell overboard in the Bahamas while cruising on the Norwegian Epic ship. That passenger was able to be immediately rescued by the ship's crew.

An average of 19 people go overboard from cruise ships every year, according to a 2017 report compiled for the Cruise Lines International Association (CLIA). Experts speculate a good amount of those incidents aren’t accidents (rather someone jumped or was pushed).

Longstaff, who is reportedly a former flight attendant with Virgin Atlantic, was taken to a hospital in Pula, Croatia, and is expected to make a full recovery.