Articles
Mike Arnot is the founder of Boarding Pass NYC, a New York-based travel brand and a marketing consultant to airlines. A private pilot, he can sometimes be found above the skies of New York City.
Follow
May 29, 2018
•
8 min read 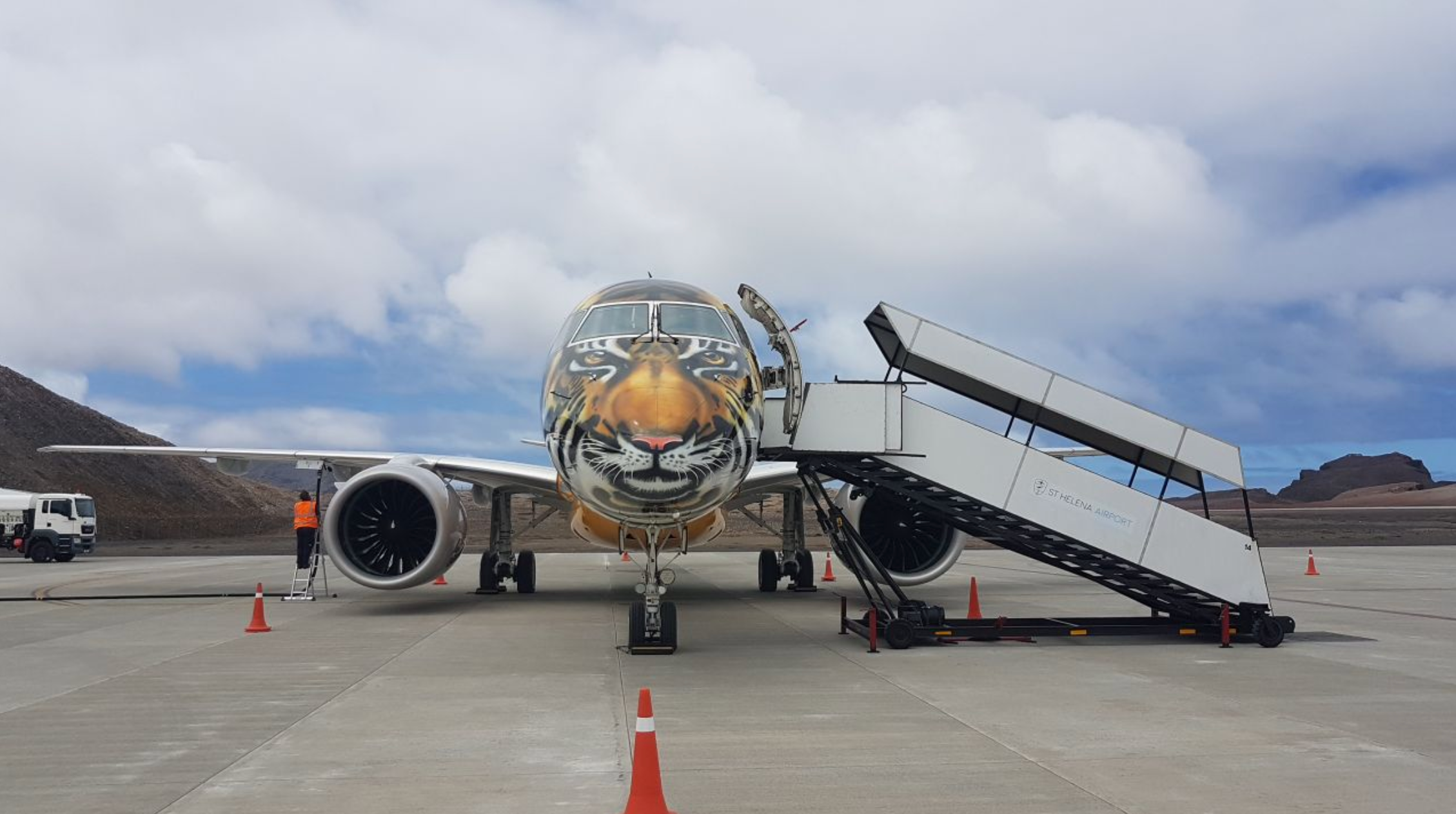 Why You May Soon Find Yourself Flying on Embraer's New E2 Jet
This post contains references to products from one or more of our advertisers. We may receive compensation when you click on links to those products. Terms apply to the offers listed on this page. For an explanation of our Advertising Policy, visit this page.

Step one: Develop the world’s leading series of regional jets.

Step two: Design a brand new series of aircraft, paint it with a tiger livery and name it “The Profit Hunter”.

It may not be quite so easy for Embraer, but they're giving it a go with their shiny second generation E-jets, called the E2.

2018 will be revealing for the program. Embraer and its main competitor Bombardier are now battling head to head for buyers worldwide for their 100+ seat twinjets, the E2 and C Series, respectively. They aren't the 100-seaters you may know from your regional flights today; thanks largely to more fuel-efficient engines, they can go really far, and offer much better economics in terms of cost per seat.

Aircraft in this category, for example, could allow British Airways to fly an all-business class flight between JFK and London's City Airport, replacing the Airbus A318. "That is an eye opening capability for an airliner," said Henry Harteveldt, a leading airline-industry expert. "When selling a product, you want the market to chase you; you don't want to chase the market. That's what I like about both the E2-195 and the CS300. You can combine realistic capacity with range, and get very creative," he said.

Souza, a 21-year Embraer veteran, holds no punches when it comes to Bombardier’s alternative.

[pullquote source="Embraer Marketing VP Rodrigo Souza"]“We built the most efficient single-aisle aircraft on the market. If we thought composite wings were more efficient, we would have built them."[/pullquote]

As my colleagues have noted after flying the delivery legs of the new E2 the cabin feels larger than the existing E190, which Souza compares to an all-business class design. The economy seat pitch chosen by Norway's Widerøe is a tight 29 inches. However, there’s never been a middle seat on the E-Jets, which is an advantage for passengers. (In contrast, Bombardier’s C Series is laid out 3-2 in economy with a 19-inch wide middle seat.)

An E2 that can accommodate 100 passengers can also accommodate 100 roller bags. On a recent flight, a TPG reviewer immediately noticed the better overhead bin space. The E-Jets eliminate the annoying aluminum spar between the seat in front of passengers, allowing for better leg room and even enough room for an additional roller.

The best innovation? Business class can be configured to have staggered seats in a 2-2 layout seen above, which allows for more privacy for business passengers without sacrificing many seats. I personally will be excited not to have to pole-vault over my business class companion on a regional jet. The seats look exceedingly comfortable and the layout just might allow a businessperson to get some work done on the flight. (A little pull-up screen would do wonders for privacy.) Widerøe did not choose this layout for its planes, but I hope any US carriers ordering the plane will.

Reception of the staggered concept will be passenger-subjective. Harteveldt, the airline industry expert, was not as convinced of the merits. "Credit to Embraer and their design partners to be creative and innovative here. But it seems convoluted and tortuous," he said.

The E2 is already an impressive aircraft, building on years of Embraer's expertise and lessons learned. "Embraer had enough material with their existing jets," said Richard Aboulafia, vice president of analysis at US aviation consultancy firm Teal Group. "They could move gently here. And this is a very efficient machine. The E2 is well-positioned."

In contrast, Bombardier highlights its composite wings for the C Series, the first of its kind for a single-aisle aircraft. Embraer doesn't think its jet needs them. “We built the most efficient single-aisle aircraft on the market. If we thought composite wings were more efficient, we would have built them,” Souza said. Composites are lighter than aluminum, which is why the Boeing 787, for example, is largely made out of them.

But Souza said that for a flight between one and two hours where most of these planes will be employed, there is not much benefit in a composite wing. “We built a wing that has a lower maintenance risk and weighs less than our competitor. So what would be the point of a composite wing? Coming from the CRJ, I think they [Bombardier] needed to show something new and different.”

Nevertheless, Delta selected the C Series to replace its Boeing 717s. And JetBlue has openly mused about the engine maintenance issues that plagued the E190, prompting the airline to review the fleet as part of a broader cost-savings initiative. While no US carriers have signed on to purchase the E2, Widerøe, the Norwegian carrier, recently took delivery of three E190-E2 jets.

I asked Embraer's Souza if a fleet planner at an airline (and JetBlue more precisely) would hold Embraer to account for the engine maintenance challenges they faced with the E190.

“The E190 had issues just like any other new program," he said. "And for the development of E2, the obstacles we faced are now a strength. With the E2, we know all of the issues of the E1. We’ve addressed all of them with this design. Keep in mind, we had over 500 requests from our 70 airline partners. That’s an incredible database of knowledge for us,” Souza said.

[pullquote]"...We are responsible for the entire aircraft. And we stand behind our product."[/pullquote]

“Some customers had complaints, some didn’t, but we are responsible for the entire aircraft. And we stand behind our product,” Souza said.

“For our customers, the E2 is a solid offer. We are not making promises. We are not dreaming. Unlike our competitors who have zero experience with their new plane, we have concrete data to back it up.”

JetBlue is the perfect case for the E2, he said, noting that training a pilot on the new platform takes two-and-half days, compared to 25 to 30 days for a new platform. This is a distinct advantage, as pilots are already in short supply. A JetBlue pilot currently flying the E190 could conceivably fly the E2 version in a heartbeat.

The impact of the combination between Bombardier and Airbus, and the possible union of Embraer and Boeing remains to be seen.Said industry analyst Richard Aboulafia: "Both Bombardier and Embraer have always been hobbled by high manufacturing costs. With their combination, Airbus can now bring significant supply chain savings to Bombardier. Embraer knows this. The barbarians are at the gate."

The answer will come soon. The Farnborough Air Show, traditionally the venue where a lot of aircraft orders are announced, is in mid-July. That's where we will likely see which airlines want to ride the Profit Hunter.

TPG contributor Mike Arnot is the founder of Boarding Pass NYC, a New York-based travel brand, and a private pilot.

Related stories
Legislation that could gut credit card rewards set to move through Congress
Would you stay at 1 of these 8 haunted hotels this Halloween?
Southwest winter flash sale: Get one-way flights for as low as $29
You can currently buy points and miles with up to a 100% bonus — but should you?
Featured image by The Profit Hunter. Image via Embraer.