Articles
Charlie Page is a senior first officer on the Boeing 787 Dreamliner with over 10,000 hours of flying experience, both around Europe on the A320 family and worldwide on the B787. He is also a freelance writer, contributing to a range of print and online publications.
Aug. 22, 2020
•
11 min read 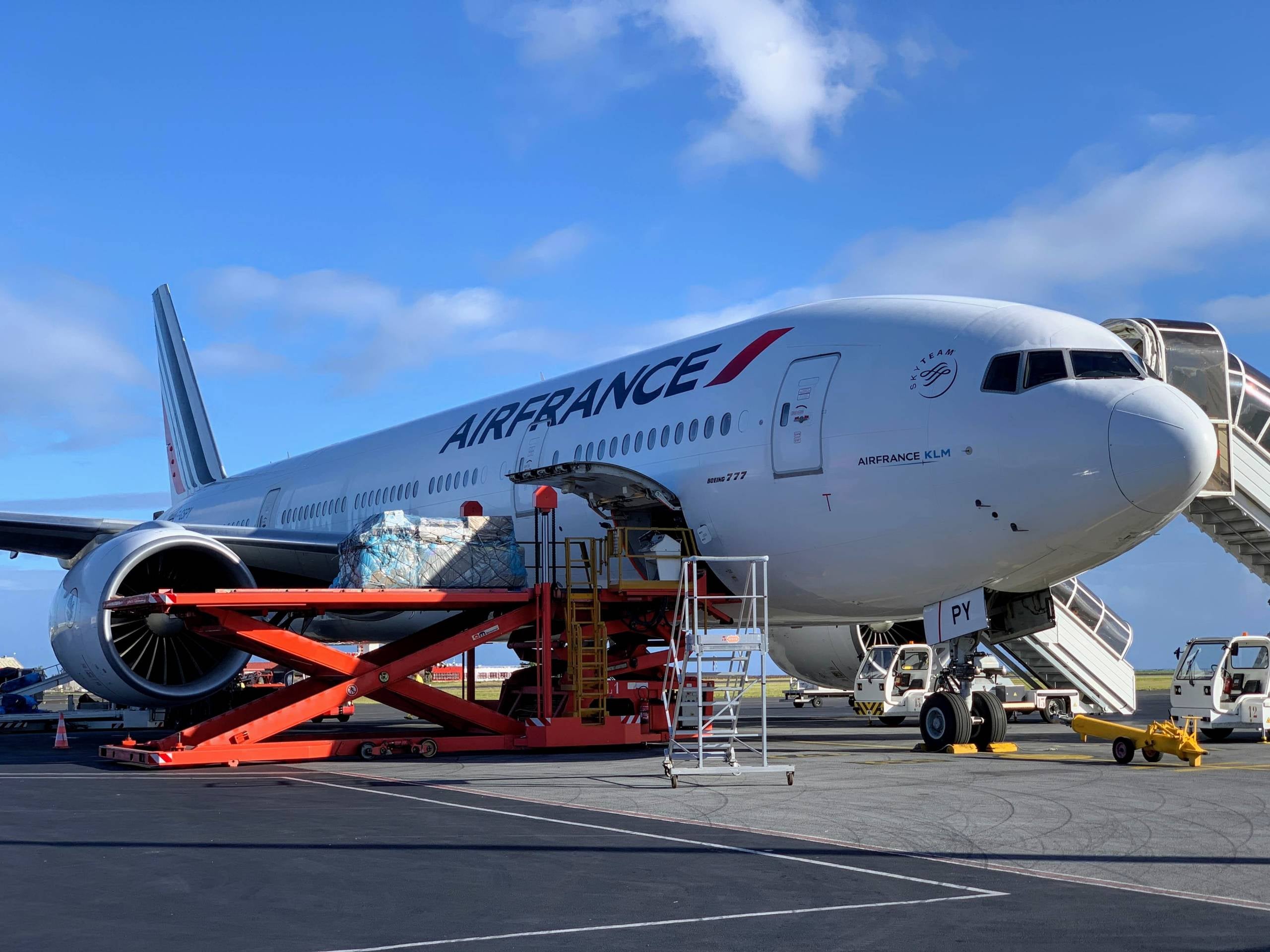 Most commercial airliners are designed to transport hundreds of passengers around the world in varying levels of comfort. If you're fortunate enough to be sat up the front, you'll have the luxury of a fully flat bed and delicious linen to sleep the flight away. Sat farther back is a little less glamorous, having to make do with a scratchy blanket and your seat mate's morning breath.

However, have you ever paused to think about what is situated underneath your feet as you have to stand up for the fifteenth time to allow the window seat passenger out to stretch their legs?

You may think it's just your suitcase, haphazardly thrown onto a pile of other bags. The reality is quite different.

On smaller aircraft types, baggage is loaded by hand directly into the cargo holds. They are stacked up and secured by netting to stop them from moving around. However, on a larger aircraft such as the 787 Dreamliner, there could be hundreds of bags plus an enormous variety of freight.

To make the loading and unloading process quicker and easier, ground staff use unit load devices (ULDs) such as containers and pallets.

Containers are primarily used to load passenger baggage and are a standard shape and size to fit a range of aircraft. For example, an LD3 container will fit in A330, A340, A350, A380, B767, B777 and B787 aircraft types. This gives airlines great flexibility when operating a fleet of different aircraft.

As bags arrive from the check-in desks to the loading zone under the terminal building, ground staff begin to load them into the containers. Even with a container, the bags are not thrown in randomly. They are stacked like a giant 3D jigsaw puzzle to ensure that the weight is evenly distributed and so that the bags don't shift position in flight.

Read more: How do pilots deal with an engine failure on takeoff?

As each bag is loaded, the tag is scanned so that a record is kept of which bag is in which container. Should a passenger fail to make it to the gate on time and they are offloaded from the flight, their baggage must also be removed.

Instead of searching through every container for the bags, the ground staff can look at the log and see in which container the bags have been loaded. It's then a question of accessing the correct container and removing the bags.

This process saves time, allowing the loading process to begin even before the aircraft has arrived and then reducing lost time in the event of baggage offload.

Freight comes in all shapes and sizes so it's not always possible to load it into baggage containers. As a result, freight tends to be loaded on pallets, which can then be put into the aircraft in the same fashion as the containers.

The versatility of the freight pallets enables them to carry all sorts of goods. Avocados, fresh-cut flowers, salmon, live eels, car engines, lawn mowers. The list is almost endless. Aircraft sometimes even carry human remains when a deceased person needs to be reunited with family in another country.

When designing an aircraft, manufacturers spend a great deal of time working out how it will be serviced whilst on the ground. They plan the vital access points, such as boarding doors, cargo doors and water filling points so that they don’t interfere with each other.

The basic principle is that passenger boarding/disembarking and refueling are done on the left hand side, and all other ground services, such as catering and baggage and cargo loading is done on the right-hand side. Except for the bulk cargo hold door.

If this door was on the right-hand side, the rear galley (accessed by the aft right cabin door) would not be able to be serviced whilst the aft cargo hold door was in use. By placing the door on the left hand side means that both can be in use at the same time.

Before each flight, the operations department carefully calculates which ULDs must go where. This provides the ideal balance for the aircraft not only for takeoff, but also during flight. This information is this provided to the pilots in the form of the load sheet. Before departure, the captain must sign this document to signal that they are happy with how the aircraft has been loaded.

As a result, the ULDs must be moved to exact spots within the cargo holds and this is done with the assistance of powered wheels and bearings in the floor of the hold.

Using a small joystick, the loader is able to move the ULD off the loading device and into the aircraft hold. From here it is rolled to its correct position before being locked into place.

The forward and aft cargo compartments are ideal for bigger items which can be secured to ULDs but what about smaller items?

The bulk hold caters for items of cargo which may need a little more care so this is where we carry pets when they fly with us. They are secured inside their travel crate which is then carefully loaded into the bulk cargo compartment.

Read more: Your next flight could be a pilot’s final test before making captain

The aircraft's air conditioning system keeps the temperature the same as in the cabin and lights can be left on so that the pets don't have to be left in the darkness for hours on end. The travel crate also has enough water to ensure that the animals are kept well hydrated during the journey.

The Boeing 787 Dreamliner is unique in that it can chill the forward cargo compartment to maintain an exact temperature between 39 degrees Fahrenheit and 80 degrees Fahrenheit. This enables airlines to carry a whole range of cargo such as perishable and live goods, but also specialist freight, which needs to be kept at a low temperature, such as vaccines.

Vaccines are incredibly temperature sensitive and need to be kept between 35 degrees Fahrenheit and 46 degrees Fahrenheit from the point of manufacture, all the way through to being administered to the patient. Even the smallest of temperature excursions along the transport chain could result in decreased effectiveness of the vaccine.

According to the World Health Organization, vaccines for influenza are some of the most sensitive to temperature excursions, particularly to heat. Getting too warm during the transportation process and the whole batch could become void.

Read more: Can you hear me now: How pilots communicate with ATC while 35,000 feet in the air

As a result, manufacturers need a reliable logistical set up which will ensure that the drugs reach the patient at the required temperature. This isn’t a problem for short-range travel where a refrigerated truck can be used, but when the journey is thousands of miles and time is of the essence, air transport is the only option.

When leaving the manufacturing plant, vaccines are packed in a specialist box along with a number of coolant packs. When they are loaded into the aircraft’s cargo compartment, the pilots are informed by means of a notice to the captain -- the NOTOC.

This informs us of the temperature to which we must set the forward cargo hold. When the door closes, the air conditioning system quickly chills the hold to the desired temperature and maintains this for the entirety of the flight.

The FCAC is also used for other temperature-sensitive items such as fish and fresh-cut flowers. By keeping the cargo compartment chilled, we ensure that the produce arrives as fresh at the destination as it did at the start of the journey.

The cargo holds also have a sophisticated system of fire protection. Depending on the variant of the 787, there are a number of smoke detectors in the cargo compartments. The -9 has more than the -8, and the -10 has more than the -9. It’s directly proportional to the size of the aircraft.

Like with the engine fire detection, two cargo compartment smoke detectors must be activated for the flight deck alarm to be set off.

In the flight deck, the indications of smoke in the cargo compartment are very similar to that of an engine fire. The master warning light and bell are activated and the EICAS message is illuminated.

If a CARGO FIRE warning is activated in flight, the system automatically discharges two extinguisher bottles into the relevant compartment. After 15 minutes, the remaining bottles are discharged, but at a slower rate.

The pilots can also activate this system by pressing the CARGO FIRE DISCHARGE switch in the flight deck.

There's far more going on under your feet on an airliner than you may think. The cargo compartments are a versatile space which can be used for anything from car engines to human remains. The positioning of the ULDs is critical as an incorrect configuration could result in the aircraft struggling to get airborne on the takeoff run.

With the variety of items which could be found in the cargo compartments, aircraft have fire suppression systems in the holds in case a fire should be ignited. This system is powerful enough to allow some aircraft to fly for three hours before landing at a suitable airport.