Articles
Bill Fink is a senior writer for The Points Guy covering travel news, trends, and cool adventures. His award-winning stories have been featured in AARP, BBC Travel, Frommer's, Lonely Planet, National Geographic, Outside, Yahoo Travel and many others.
Follow
April 27 2022
•
6 min read 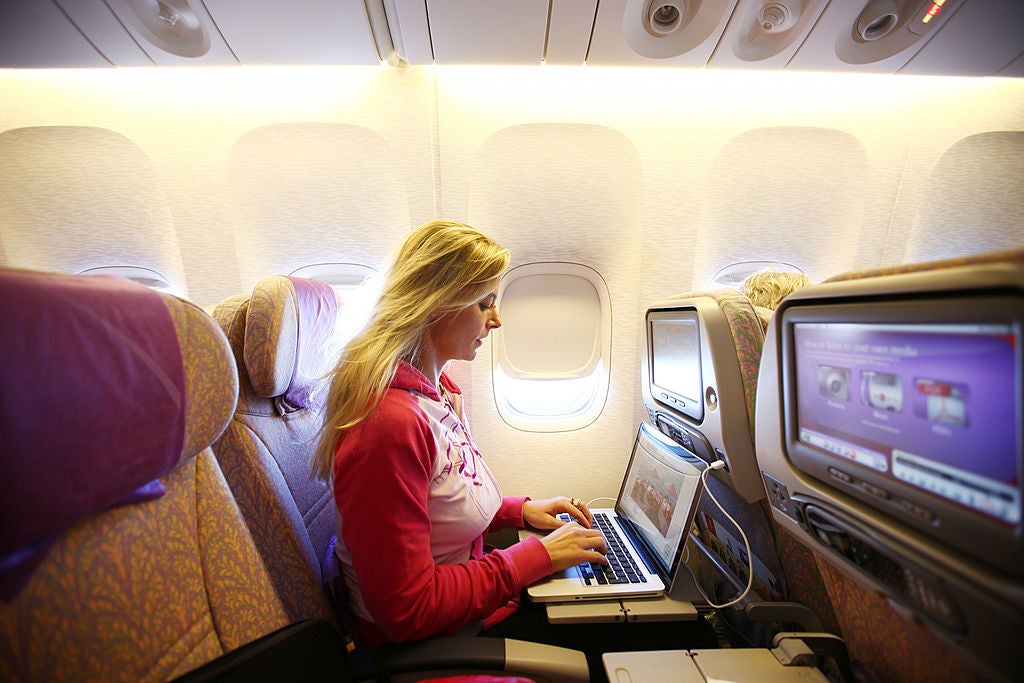 The airline Wi-Fi experience is changing. With the heightened demand for inflight internet access and the improved technologies able to deliver it, airlines are coming up with new ways for passengers to get connected, with a wide variety of pricing models to access the services. Delta's recent announcement of $5 per-flight Wi-Fi access, and JetBlue's complimentary Wi-Fi for all passengers (including streaming video access, which most airlines block), are among the newer inexpensive options.

While American, Delta and United are, for now, sticking to their monthly subscription pricing models, the future is looking bright for cheap connectivity. Many airlines and credit card companies are providing free or discounted in-flight Wi-Fi service access as special membership features or limited time offers.

The Points Guy looked into the different inflight Wi-Fi options out there, with a focus on determining whether existing subscription models or per-flight choices are right for you. Here's what we learned.

The "Big Three" airlines of American, Delta and United have matched each other on their Wi-Fi subscription pricing of about $50 per month for unlimited access on domestic flights. American's rates are $49.99 per month (or $59.99 per month for two devices), for access in North America, the Caribbean and Central America. Delta's subscriptions sell for $49.95 monthly for coverage in the United States, Canada and Mexico, or $69.95 for international access. United's monthly Wi-Fi subscription is $49 (or 7,500 miles) for coverage in North America, the Caribbean and Central America. United's global plan is $69 per month (or 10,500 miles), with annual plans selling for $539 domestically and $689 internationally.

The monthly (and even annual) plans are popular with some frequent travelers, particularly business travelers on expense accounts, who need to stay connected for work.

P.J. Sloan, who flies nearly every week in his job as a corporate trainer for a Fortune 500 company, said, "I'm a monthly subscriber to American Airlines' offering. It's not great but allows me to work while in the air. I can access email and basic files. It's a break-even if used for more than two trips per month."

Scott While, who said he's been flying 12-14 times a month managing COVID-19 vaccine clinical trials, subscribes to Delta's monthly plan and is "happy with it."

Despite downward pressure on pricing from JetBlue and other airlines, for the time being, neither American, Delta nor United have announced any modifications to their subscription models.

Leah Rubertino, a spokesperson for American, confirmed no changes are in the works for its monthly plan.

Southwest and Alaska Airlines are both offering a fixed price of $8 for Wi-Fi access per flight (when available), regardless of length. United's domestic per-flight pricing is $8 for each segment for MileagePlus members and $10 for non-members, with Day Passes available for multi-segment trips. The airline also offers free messaging. An informal survey of TPG readers rated American as "by far" the most expensive per-flight Wi-Fi service, with rates of $19-$29 reported on New York to Miami flights, and $35 for cross-country flights.

In terms of partnership programs, T-Mobile has linked with Gogo Inflight to give its customers free Wi-Fi access with any airline on the Gogo platform. Most T-Mobile rate plans give customers one free hour of inflight Wi-Fi and unlimited texting, while some premium plans like Magenta Max give users unlimited access. Unfortunately for T-Mobile users, Delta is moving away from Gogo Inflight to the Viasat system, but Alaska and American (on most flights) continue to use Gogo.

The good news for Delta flyers is that the airline is charging just a flat rate of $5 per flight (domestically) for the Viasat service, which is "faster and more reliable than ever before," according to Glann Latta, Delta's managing director of in-flight connectivity, and "on average up to twice as fast as service offered in 2019."

Jillian Dickens, president of Bannikin Travel & Tourism and frequent traveler, used Wi-Fi on Delta en route from Europe to the U.S. and reported to TPG from the plane: "I'm enjoying a wonderful high speed Wi-Fi experience at $21 for the flight." She said she usually just writes and saves emails during a flight for a bulk mailing upon arrival, but on this flight, “I found myself in need of sending some important messages out before the weekend” so she splurged for the Wi-Fi. Normally on flights she “enjoys the rare reprieve of being unreachable” — so she's not considering any of the monthly subscription plans.

Business traveler Erik McCormick said he had signed up for American's monthly service during a particularly busy flight period, but has since unsubscribed. He just uses per-flight programs as needed, especially because he has "run into so many flights lately where the Wi-Fi was unavailable or just downright unusable, so a monthly subscription wouldn't make sense." Other passengers are making do with free messaging services while in flight, leveraging special deals or just making a one-time Wi-Fi access purchase when necessary for work. Related: How to save on in-flight Wi-Fi

Overall, airlines seem to be reducing in-flight Wi-Fi prices or even providing free access. However, American, Delta and United are holding firm on their $50 per month subscription plans. Some frequent business travelers find that the subscription plans are an economical and necessary purchase for their work, but other less frequent fliers don't seem to find the plans worthwhile.

Many flyers just purchase per-flight Wi-Fi as needed, especially when deals are in place and with the increasing number of airlines offering more affordable pricing.

And not just low-cost but no-cost Wi-Fi may continue to roll out. Delta's Managing Director of Brand Experience, Ekrem Dimbiloglu, said, "We are committed to delivering free Wi-Fi in the future, but while it won’t happen overnight ... by equipping the right technology to the right fleet, the airline is ensuring it can support a free service in the future."

Expect to see further Wi-Fi pricing and partnership deals in the year ahead across many airlines.