Goodbye, Virgin America: What It Was Like on the Airline&#8217;s Final Flight 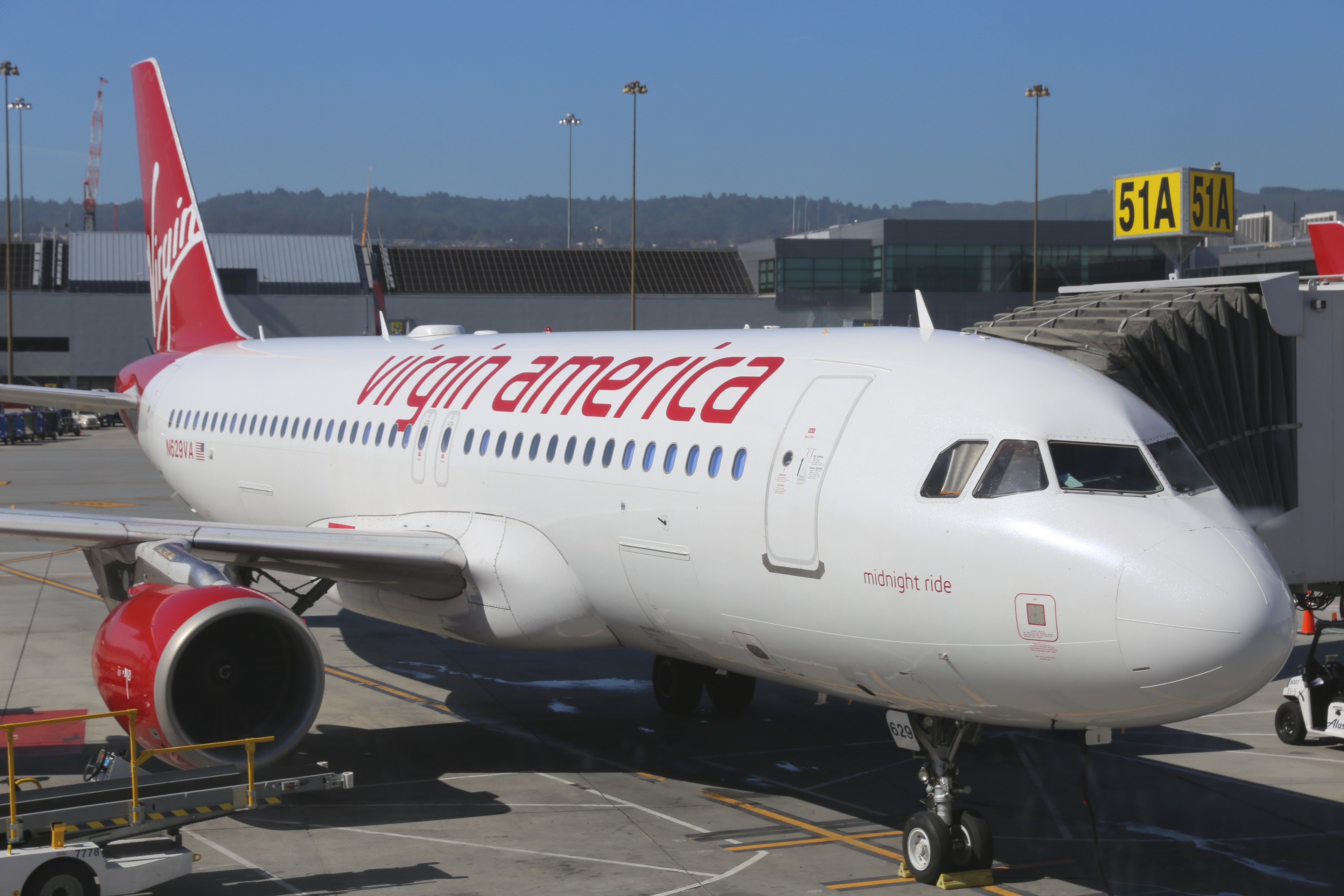 Goodbye, Virgin America: What It Was Like on the Airline&#8217;s Final Flight
This post contains references to products from one or more of our advertisers. We may receive compensation when you click on links to those products. Terms apply to the offers listed on this page. For an explanation of our Advertising Policy, visit this page.

VX1182 took off from San Francisco (SFO) on Tuesday April 24 at 9:30pm with a black sky and just a glimmer of the San Francisco Bay in the distance. The final Virgin America flight revved its engines and took off for one last ride. When the aircraft landed in Newark (EWR) the next morning, the Virgin brand and operation ceased to exist, to be replaced by the airline's new owner, Alaska Airlines.

It was the end of an iconic brand, the US' first startup airline in the Internet age.

I was an early convert to Virgin's youthful, modern vibe. When I decided to go to in school in Washington, DC, eight years ago, it meant that I'd have to spend a significant time on an airplane commuting back and forth between my home in the San Francisco Bay Area and the nation's capital. I only had three nonstop options: United, US Airways and Virgin America. I flew all three but came to find that one really stood out: Virgin America. From the mood lighting to the music at check-in, VX made traveling across the country in coach surprisingly fun.

Founded in 2007, Virgin America was Richard Branson's third iteration of his Virgin brand in aviation after starting two other successful carriers, Virgin Atlantic and Virgin Australia. Virgin America grew over nine years until Alaska bought it from a tiny operation at SFO to an airline with 29 destinations and 69 aircraft.

In 2016, Alaska purchased Virgin for $2.6 billion. But one of the results of the merger was that the Virgin brand would fade away (not without some kicking and screaming from Sir Richard himself). The deal closed in early 2017, but it wasn't until January that Alaska and Virgin became one and received a single operating certificate unifying the two carriers. Monday's journey would be the last Virgin America-marketed flight.

I arrived at SFO around 7pm with a few hours to kill before the final flight. I headed to the check-in desk to find a near empty line. Alaska has already taken over much of Virgin's check-in areas. By the time this is published, when you arrive at the airport you will no longer see any signs that Virgin America existed — its signature red will have been fully replaced by Alaska's subtle green and blue.

I received my boarding pass from a somber Virgin America agent who told me "I don't know what it will be like tomorrow... everything will change." I headed through security and towards the gate 54A. I was quite early so I snapped some pictures of the Airbus A320-200, aptly named Jersey Girl, that would be ferrying us 2,600 miles towards one of Virgin's bases in the New York area.

Virgin had a fleet composed entirely of Airbus narrowbody jets, with 10 A319-100s, 50 A320-200s, and six A321neos. The future of the Airbus fleet is in question as Alaska absorbs the European-made jets into its fleet of Boeing 737s like the one below.

To the right of me at gate 51B a commotion was stirring. FlyerTalk organized an officially unofficial "Farewell Fiesta" on VX1948, which was the last Virgin flight to depart. (Mine would be the last to land, which is why we chose it for a last ride.) AvGeeks, Virgin fans and airline employees filtered in and the excitement and nostalgia near the gate were tangible.

Hugs were exchanged and some tears were shed. "Virgin forever!" one employee shouted as the gate agent held back tears when she tried to announce that the flight was ready to begin boarding.

Virgin employees even performed a live version of the the in-flight safety video that launched the trend of funny safety videos, the #VXSafetyDance.

You could tell that the Virgin brand really was beloved by its people.

Here's the real video for comparison:

I headed back to my gate where I got some Virgin swag, including a seat cover, blanket and A320 safety card. A table of cupcakes for the final flight was positioned next to the gate too.

I spotted a few fellow travelers who appeared to be on the flight for the same reason as I, to experience Virgin one last time. We exchanged pleasantries and confirmed that we were all AvGeeks. Two had done this as a same-day turn from Newark (EWR) to San Francisco (SFO) and one told me his trip was also part of a mileage run.

The call went out for passengers to start boarding, so I headed down the jetway which was lit to resemble what will be Alaska's blue interiors.

Upon entering the aircraft, I immediately thought how forward thinking Virgin was with its mood lighting. Not only did it pioneer mood lighting in the US, but it was the first to roll-out fleet-wide Wi-Fi, on-demand food ordering and seat-to-seat messaging. Fortunately Alaska will try and incorporate some of these ideas and the innovative spirit that Virgin embodied.

“We simply want to make air travel better,” Virgin Group design director Adam Wells said at the founding of the San Francisco-based airline in 2007. “If we are successful, passengers can expect Virgin America to deliver future innovation that ensures the flying experience keeps getting better and better.”

I settled into seat 22F and relaxed as more boarded the aircraft. When the captain came over the loudspeaker to announce that this would be the last Virgin America flight most in the cabin appeared to be surprised. To them, this was just another flight — a means to an end. But for others including the captain, who had worked with Virgin for the last eight years, the moment was emotional.

Alex Duerre, 32, of Anchorage, Alaska, told me he had decided to book the flight so he could be part of a "historic moment." He had also been on the last flight of US Airways in 2015, and was sad to see that the industry has consolidated so much over the last decade, leaving travelers with fewer and fewer choices. Like me, he traveled on Virgin frequently between the East and West Coast when he was in college.

"You're not just a number," Duerre told me about what he thought made the airline stand out. "The Big Three attitude isn't there. It really paved its own way and redefined the industry."

Now, Duerre is worried that the new airline will become more and more like the Big Three and that Alaska's strong milage program, which still rewards flyers based on their actual distance flown, will end up being devalued for flyers like him. (He might be comforted to know that TPG has chosen Alaska as the best US airline of 2018.)

I headed to the back of the cabin to speak with two off-duty Virgin flight attendants about what they thought of a future when they'll no longer wear the Virgin wings on their chest.

Chris Barone, who's been with Virgin for nine years, said that the airline was a special family. "We all look forward to coming to work," he said. "We have the ability to wow our guests and elevate each other."

"Nobody heard of Virgin at first. To see how it grew was something to be proud of," said his colleague, Zoe Martinho, who had been with the airline six years. "I cried a few times today," she added, "it's bittersweet." Her next flights would be as an Alaska flight attendant.

"I'll miss the culture. We were changing the industry, we were being innovative and were empowered to do that. We almost had a creative freedom to express ourselves," she said.

Both were optimistic about the merger, saying they've only had positive experiences with other Alaska employees. They're excited to take the Virgin culture and incorporate it into the Alaska brand. "It’s a new chapter. We will still have Virgin as part of our core," Barone said.

I used the in-flight entertainment system, known as RED, to order food, which was another pioneering move. Unfortunately, it will be laid to rest by Alaska and replaced with traditional food and drink service. "RED is dead," Barone said. Alaska will be replacing the Virgin seatback entertainment with a streaming system that requires travelers to have their own device, like others are doing, for example American and United on their new 737 MAX jets.

As I settled in to write this story, I connected to Virgin's GoGo Wi-Fi for free thanks to a GoGo certificate from my Business Platinum Card® from American Express.

Our aircraft landed in Newark 30 minutes ahead of schedule. The flight attendant who came over the intercom right as the wheels touched down gave the usual spiel about how we needed to keep our seatbelt fastened until we reach the gate and that it was ok to take your phone off airplane mode — but he ended with what all Virgin flyers will now hear, "We thank you for flying Alaska Airlines, we hope you enjoyed your experience and we look forward to seeing you again soon." I heard a collective sigh when those words were spoken.

I made my way off the aircraft into Newark's Terminal A and there wasn't even a hint of Virgin America. Everything had been transformed overnight — signs, uniforms and branding were all Alaska. The only indication of Virgin's existence was the aircraft that we had just flown in on. It won't be until the end of the 2019 that Alaska repaints all of its Virgin Airbus aircraft with its own livery. By early 2020 passengers will see a unified brand experience no matter where they fly.

You also might find yourself on on a plane that's painted with Alaska's colors but still sports a Virgin interior. Alaska plans on retrofitting all of its aircraft over the next few years with new interiors that bring in some of the Virgin design elements, like mood lighting.

As I walked out of the terminal I stopped by the Alaska check-in desk, which was seemingly devoid of anything Virgin but full of giddy ex-Virgin employees who had big smiles and wide eyes even at 6am.

Starting Wednesday, all flights begin with the AS Alaska code, and the with the VX code is being dumped. VirginAmerica.com redirects you to Alaska's website and the carrier will fully adopt the Alaska flight reservation system.

It's the dawn of a new era. Farewell, Virgin.

All pictures by the author.