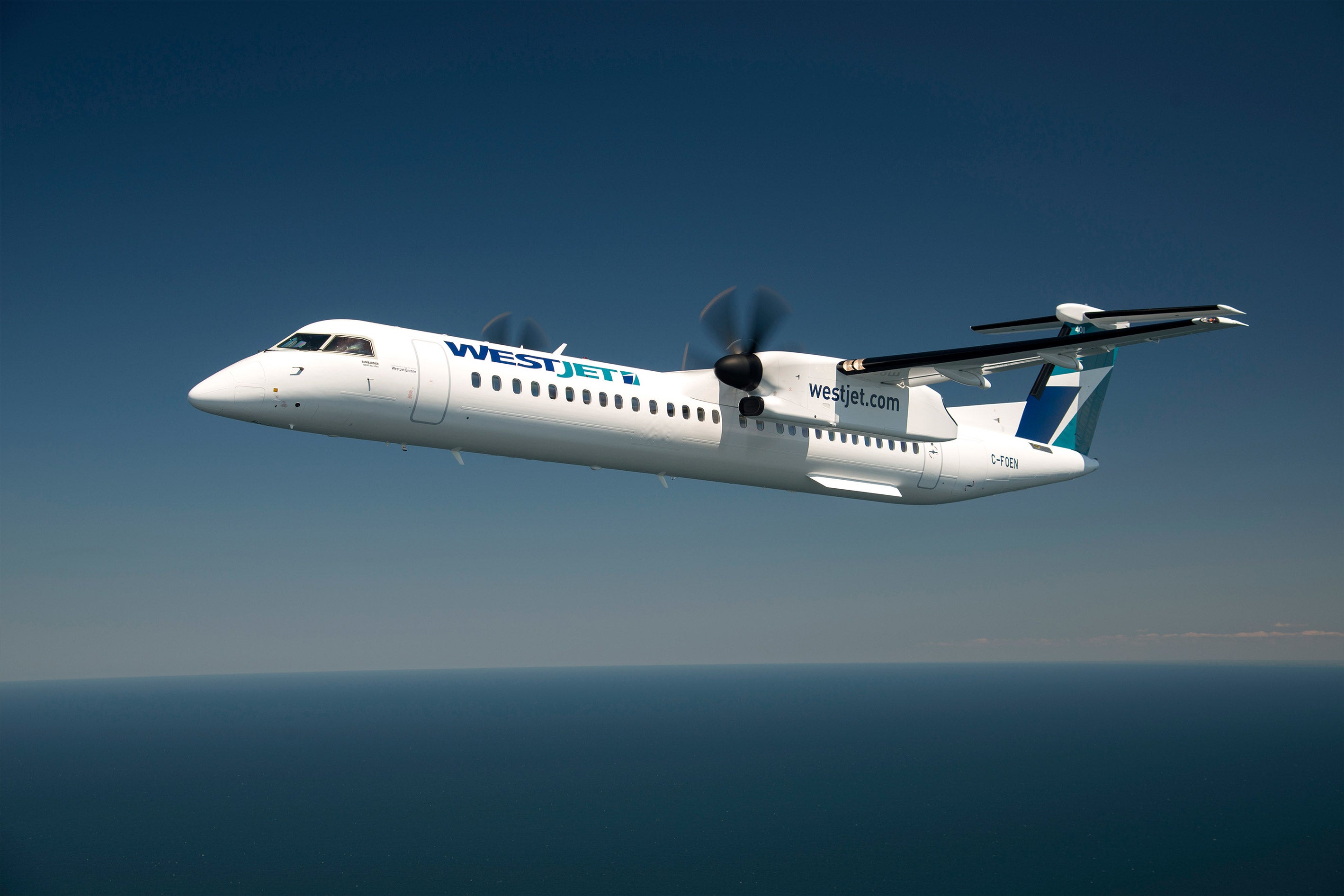 WestJet Dash 8s Could Soon Take Over These Delta Routes to Canada
This post contains references to products from one or more of our advertisers. We may receive compensation when you click on links to those products. Terms apply to the offers listed on this page. For an explanation of our Advertising Policy, visit this page.

Delta Air Lines regional jets could soon step aside on some routes to Canada if the carrier’s proposed partnership with WestJet gets a green light.

The airlines plan to grow capacity by at least 20% between Canada and the USA, including adding six new routes, by coordinating flights in the market if their joint venture is approved by US authorities. This would allow them to optimize routes around the most suitable aircraft for a market from their respective fleets.

A joint venture allows multiple airlines to act as essentially one carrier in a given market. They can coordinate fares and schedules, jointly market and sell tickets, and, in many cases, share revenues and costs.

“On certain other transborder routes, particularly in smaller short-haul markets, the partners could replace Delta’s regional jets with WestJet’s more efficient Q400 aircraft, which would maintain sustainable service in otherwise unprofitable markets,” they say in a joint filing with the US Department of Transportation on July 2.

Related: Delta Air Lines Says Boston Is Now One of Its Hub Cities

While the airlines did not define “smaller short-haul markets” in the filing, WestJet only flies its De Havilland Canada Dash 8-400s, previously the Bombardier Q400, on transborder routes up to 700 miles, according to Diio by Cirum schedules. Its longest flight is between Myrtle Beach (MYR), South Carolina, and Toronto (YYZ) at 691 miles.

Delta flies a mix of Bombardier CRJ and Embraer 175 regional jets on 19 transborder routes, schedules show. Of those, two-thirds are 700 miles or shorter.

Potential routes that Delta could shift to WestJet-operated Dash 8s are:

WestJet bases the majority of its Dash 8 fleet in Calgary, Toronto and Vancouver, suggesting that any initial expanded transborder flying with turboprops could be on Delta routes to one of these airports.

As an added bonus to the airlines, WestJet's Dash 8s seat 78 passengers whereas Delta's regional jets are capped at 76 seats allowing them to economically add seats. However, WestJet's turboprops are not fitted with first class cabins -- only "premium fare seats" with complimentary snacks and beverages -- as Delta's larger regional jets are.

Delta and WestJet argue that an immunised partnership would allow them to better compete with Air Canada's market dominance. Air Canada carried 45% of the 30.9 million passengers that flew between Canada and the USA in 2018, DOT data provided by Diio shows. Delta carried 11.4% of passengers and WestJet 15.8% over the period.

Air Canada has antitrust immunity, but not a joint venture, with United Airlines in the transborder market. The carriers have repeatedly said they are considering a closer partnership.

Swapping aircraft is not the only improvement Delta and WestJet promise under a joint venture. The airlines say they are already working on streamlined procedures that would allow a customer of one airline flying on the other to check in for their entire itinerary on either carrier's app or website.

“Delta and WestJet recognize the high value that their customers place on the ability to check in online and to select their seats across carriers on multi-carrier itineraries," the carriers say in their filing.

In addition, the airlines are working towards reciprocal elite frequent flier benefits and lounge access under their proposed partnership.

Delta and WestJet received Canadian approval for their joint venture at the end of June. US authorities continue to evaluate the tie up.

Featured image by Courtesy of WestJet.