I just got a tattoo on a cruise ship — here's why you should, too 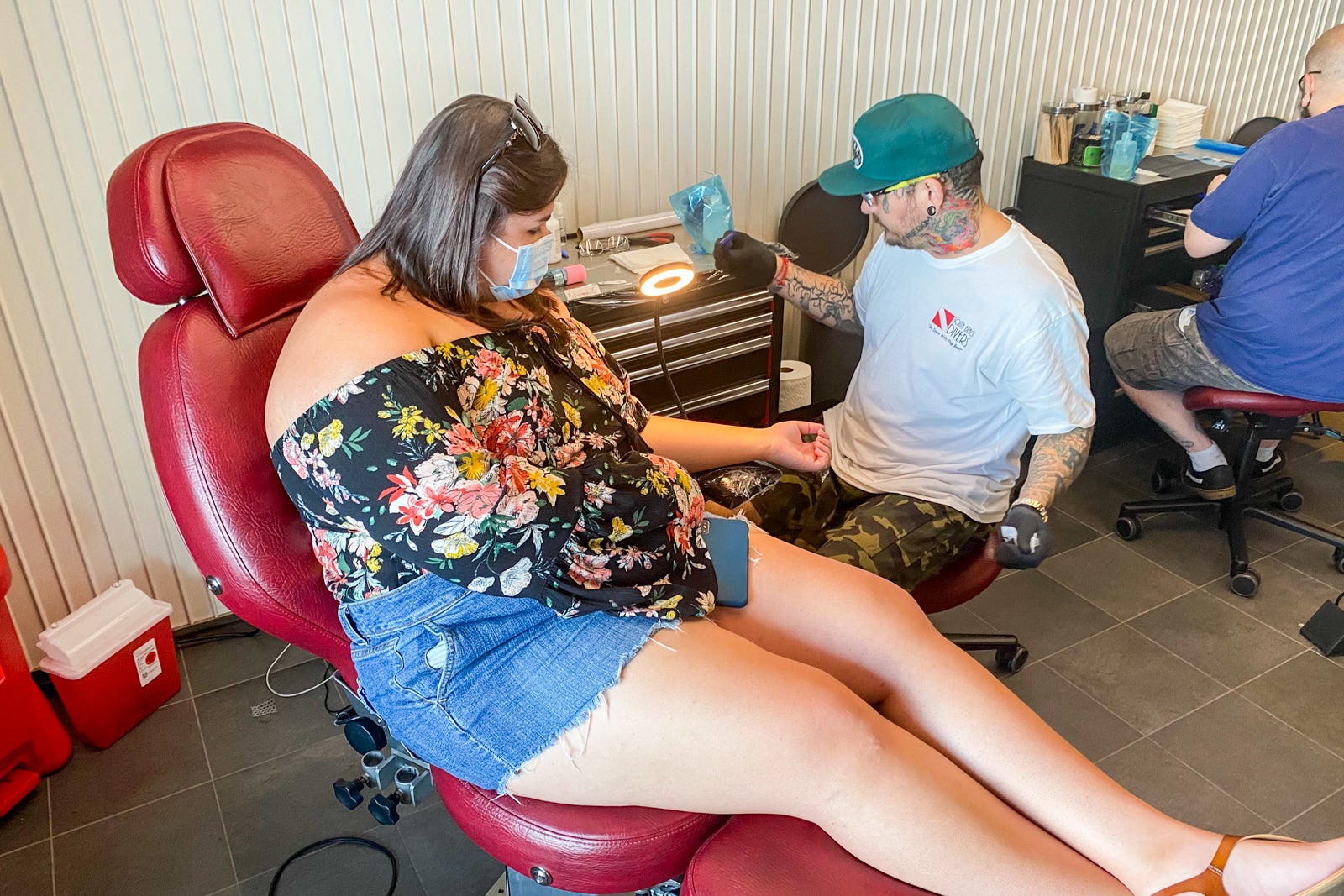 When I found out there was going to be a tattoo parlor on board the Scarlet Lady, Virgin Voyages' first cruise ship, I knew I had to get on that ship to try it out myself.

"Have you lost your mind? Getting a tattoo on a cruise ship?" Those were the questions I was asked a number of times in the leadup to the trip — from family members, friends and even a few coworkers. But I was set on getting an appointment and seeing this idea through, and I definitely don't regret it now that I'm back on dry land.

Virgin Voyages has a small tattoo parlor on the Scarlet Lady called Squid Ink. The cruise line has partnered with World Famous Tattoo Ink to provide the services, and two resident artists and one piercer are hand-selected to spend time on board.

I had an excellent experience, and I am now sporting new ink (and a new hat because I was a little bit obsessed with the design they used on merchandise). Interested in the process of getting a tattoo on a cruise ship? Here's a rundown of my experience.

I booked my appointment as soon as I got on board

While some reservations, events and excursions are bookable through the Virgin Voyages app before the cruise, some activities — including tattoo appointments — can only be booked once you're on board.

On this voyage, the tattoo parlor didn't open until we had set sail and reached international waters. But once the doors were open, there was a fast-forming line of sailors looking to secure a spot on the roster.

Thankfully, the line moved quickly, and I was able to book an appointment for 3 p.m. on Saturday (our final day at sea).

Bookings for that final day at sea went fast (I was one of the last to get an appointment slot, despite hitting up the parlor our first night on board), and for good reason. You should avoid getting a tattoo wet or exposed to too much sun while it's still healing, and if there are two things you know you'll encounter on a cruise in the Caribbean, it's water and sunshine.

An appointment on the final day of a cruise makes it easier to enjoy the other activities throughout the voyage — whether getting a tan by the beach club pool at Bimini or snorkeling with sharks (both of which I was able to accomplish before my Saturday appointment).

I put down a $150 deposit, which went toward the overall cost of the tattoo. The tattoo ended up costing $285 total. It was a bit more expensive than the cost of my first tattoo despite being smaller, but I chalked that up to the more stressful conditions for the artist and the fact that I got my first tattoo in a tiny shop in Jonesboro, Arkansas, seven years ago. Many shops — including Soho Ink in New York City, which is a shop sponsored by World Famous Tattoo Ink — have $200 minimums for tattoos, so it wasn't a bad price for industry standards.

Related: I’ve been on more than 150 cruise ships; here are my first impressions of Scarlet Lady, the first-ever Virgin Voyages vessel

An artist worked with me on a design

I knew what design I wanted before I ever booked my appointment. I showed a reference picture for what I wanted my tattoo artist, Roger, and he had me Airdrop the photo to his iPad from my phone. He used the reference photo to outline the tattoo on Procreate.

He asked questions about where I wanted to place it, how large I wanted it, in which style I wanted the different elements. Suggestions and opinions were given when I asked for them (such as which direction I wanted the tattoo facing), and he drafted up a great tattoo design.

For those who aren't 100% sure what tattoo they want, the shop did have a lookbook of designs to give sailors a sense of tattoo styles they could choose. There are even a few exclusive voyage tattoos designed by the World Famous Tattoo Ink team if you're interested in a design unique to Virgin Voyages.

The design I wanted was simple and small, but if you have a more complex design in mind, this portion of the process may take longer.

Once we settled on a design, it was printed out on contact paper and the work began.

I sat back and watched the artist work

Before going on the cruise, I was a bit skeptical about how getting a tattoo would work in the middle of the ocean. What if the boat rocks? Those fears were put to rest pretty early on in the cruise because the ship was so steady. Even when we hit a patch of stormy weather one of the early nights of our voyage, I barely noticed any rocking at all.

I got my tattoo on my inner left wrist, so the placement was simple to set up. He let my friend and Lonely Planet colleague (owned by TPG's parent company, Red Ventures) Ram Sanchez accompany me to take photos, and the overall atmosphere was incredibly relaxed and friendly.

It was smooth sailing (see what I did there?) throughout my tattoo experience. Roger showed me the brand new needle he'd be using so I knew it'd be sanitized. The wrist is one of the more painful spots to get a tattoo, but I was prepared for that. Roger did a great job about checking in with me and warning me before he starting on the linework he knew would be most uncomfortable. The overall process was even better than my experience on land from my first tattoo.

It only took about 15 minutes from start to finish, and Roger walked me through all of the aftercare information I needed as he covered the new ink.

And now I get to Enjoy my new ink

My tattoo experience exceeded all of my expectations. The team at the parlor was great to work with, and the process was seamless. While I was committed to getting the tattoo while on the ship, I did have reservations about how it might work while on a moving boat in the middle of the ocean. Those reservations turned out to be nothing to worry about.

The ship was steady, my tattoo artist was great and I'm in love with the final product.

My grandfather, or Papa, taught me how to build paper airplanes when I was a kid. We'd spend the summers folding computer paper into our own fleet of planes and competing to see who could get theirs to fly the farthest.

Now that I'm grown up, I spend a fair amount of time on real planes traveling for work and leisure. And while Papa is no longer here, my memories of afternoons flying those paper planes (and sneaking an extra scoop of ice cream when I won) are still some of my favorites. When I found a tattoo design with a paper airplane tethered to a real airplane by a contrail, I fell in love.

I'm grateful to have a little reminder of my grandfather and a tribute to one of my life's passions on my wrist — being able to say I got the tattoo in international waters on yet another adventure just makes it all the more special.

If you're planning to book a Virgin Voyages cruise anytime soon and are interested in getting a tattoo, I highly recommend checking out the Squid Ink parlor on board. Guest artists will continue to be featured on future voyages — reportedly including some pretty well-known artists from shops such as Soho Ink.

Plus, how many people in the world can say they got their newest tattoo done in international waters? Not many, and I'm proud to be among the few (for now).

Related: Virgin Voyages hopes to draw cruise newbies like me: Here’s my first impression from its first sailing

Featured image by (Photo by Madison Blancaflor/The Points Guy)
Editorial disclaimer: Opinions expressed here are the author’s alone, not those of any bank, credit card issuer, airline or hotel chain, and have not been reviewed, approved or otherwise endorsed by any of these entities.