No, Cruise Ships Have Not Been Banned from Venice 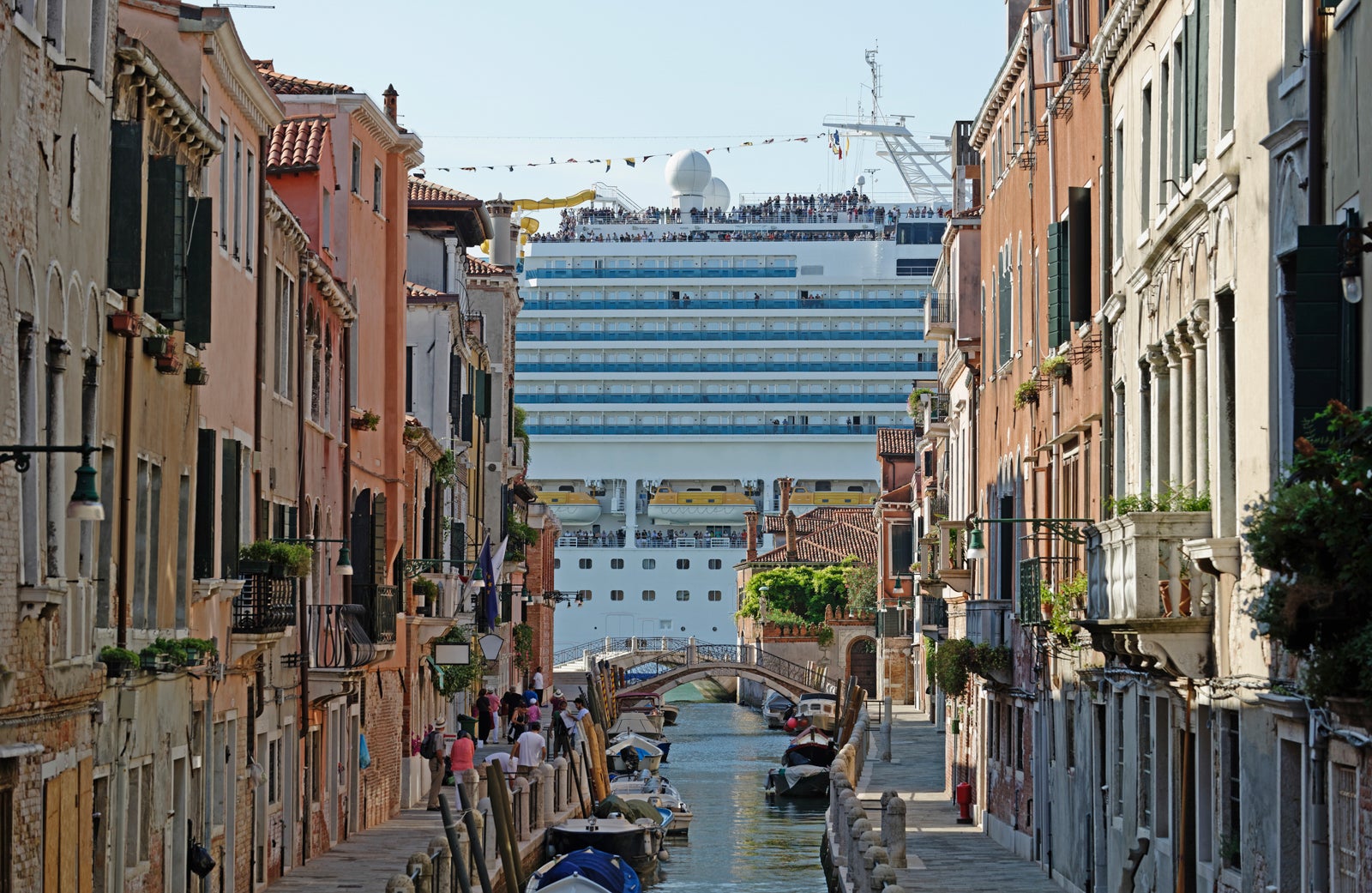 No, Cruise Ships Have Not Been Banned from Venice
This post contains references to products from one or more of our advertisers. We may receive compensation when you click on links to those products. Terms apply to the offers listed on this page. For an explanation of our Advertising Policy, visit this page.

Is it really the end for cruises to Venice? Quite a few major media outlets over the past few days have suggested as much, citing a translation of comments by an Italian transport minister.

NBC’s Today show, for example, and the largest newspaper in the UK, stated flat out that cruise ships had been banned from the iconic destination.

But you may not want to cancel your plans for a Venice cruise just yet. The reality of the situation is far less definitive, according to longtime industry watchers.

“Despite headlines to the contrary … currently there is no change [to Venice cruise calls]. Just talk of it,” said Mike Driscoll, editor of Cruise Week.

As of now, not only is there no ban on cruise ships arriving in Venice, it’s far from certain there will be a ban anytime soon, Driscoll said. Yes, in the wake of a recent cruise ship accident near Venice’s famed St. Mark’s Square, at least some Italian officials are talking about making changes to the way cruise ships arrive in Venice, he said. But what those changes will be, if anything, and when they might take effect, is still up in the air. Nothing official has been decided.

The recent stories were sparked by comments by Danilo Toninelli, the Italian Minister for Transport. Speaking in the Italian Parliament last week, Toninelli discussed plans to change the route that at least some big cruise ships take into the Venice area and the locations where they dock. Some changes could take effect as soon as September, he suggested.

But as Driscoll notes, various factions of the Italian government have been talking about such changes for years, with little to show for it.

Toninelli, notably, also wasn’t talking about an outright ban on cruise ships visiting Venice — just a ban on at least some ships sailing close to the historic center of the city.

“There were two other times the government was set to ban cruise ships from the city center, and it never happened,” Driscoll said, referring to previous, similar pronouncements of coming changes to cruise ship routings in Venice that occurred in 2013 and 2017.

Cruise ships currently arrive in Venice via the Guidecca Canal, which cuts through the heart of the city’s historic area past St. Mark’s Square. Driven by complaints from local Venetians, who cite concerns about safety and damage to building foundations, government officials for many years have discussed rerouting at least some arriving vessels to a secondary, less-scenic approach through the Malamocco Inlet, Marghera Channel and Vittorio Emanuele III Channel.

Officials also have discussed changing the docking location for some ships to the mainland Fusina and Lombardia terminals, which are several miles away from the historic island area of Venice. Most cruise vessels visiting Venice currently dock at the Marittima port area, which is located at the western end of Venice’s main island area near the causeway that connects to the mainland.

As of now, such plans are still the subject of discussions between government officials, cruise lines and other stakeholders.

In a statement that called stories of a cruise ship ban in Venice “misreported,” the main trade group for the cruise industry, the Cruise Lines International Association (CLIA), said Toninelli “has set up a working group to look at alternative solutions which could see some ships rerouted to the mainland Fusina and Lombardia terminals, until the end of the year, but no decision has been made.”

A meeting between cruise lines, the Venice harbor master and Venice’s Port Authority to discuss the topic is scheduled for Aug. 23.

“Discussions concerning the future of cruise ships using the Giudecca Canal have been ongoing for several years, and those discussions continue today without any conclusion,” the trade group said.

The cruise industry has expressed its support for moving large ships away from the Guidecca Canal since 2012. But there are hurdles to making the change, including the need to dredge parts of the alternate route that has been proposed.

There also are hurdles to moving the docking location for ships to the mainland terminals. The berths at the terminal are not ready to receive cruise ships and are too small for large ships. To be used in a significant way, they will require substantial investment.

But Changes Could Be Coming

The bottom line for cruisers, industry watchers say, is that significant changes to the way cruise ships arrive in Venice are unlikely to happen soon.

“In the short term, if you have a cruise booked that visits Venice, don't panic,” said Colleen McDaniel, editor-in-chief of Cruise Critic, the world’s largest cruise planning website. “You're likely still going to visit this incredible city. As of now, no changes have been announced, and it's likely any conversations about rerouting will take quite some time, as concerns about large cruise ships in Venice have been under discussion for years.”

Driscoll, too, said the thinking in the cruise industry is that, for now, “cruisers shouldn’t worry about their Venice cruises.” Few, if any, sailings are likely to be impacted in the near term, he said.

Still, changes of some sort are likely on the way.

“This is a different level of pressure for [change] that we're seeing,” Driscoll said, noting increased awareness of issues surrounding overtourism in the city. While big cruise ships arriving in Venice have been problematic for years, only recently has it caught on with international media, which is important as that’s putting pressure on politicians to act, he said.

The accident in June involving an MSC Cruises ship, MSC Opera, that crashed into a quay near St. Mark’s Square and damaged a docked Uniworld river cruise vessel, has aroused the public not just in Venice but around the world to call for changes, he noted.

“What's different now is the level of public backlash, particularly following the imagery of the MSC Opera scraping the stationary Uniworld River Countess,” Driscoll said. “The collision was picked up in social media worldwide [and] a protest in early June following that collision attracted thousands of marchers, notable because the city itself has a population of only 260,000.”

Cruise ships also have become the poster child for overcrowding in Venice, despite only accounting for a small percentage of the more than 20 million tourists that visit the city each year. The majority of Venice’s visitors come by land. Notably, cruise ship visits also have been on the decline in recent years. There were just 1.43 million cruise passenger movements in Venice in 2017, down from 1.82 million in 2013, according to CLIA, which cites numbers from Venice-based research firm Risposte Turismo. The number of cruise calls over the same span dropped from 548 to 466.

The decline has occurred, in part, because the cruise industry since 2014 has voluntarily refrained from bringing ships over 96,000 gross register tons to the city. That’s less than half the size of the industry’s biggest vessels such as Royal Caribbean’s new, 228,081-ton Symphony of the Seas.

For now, executives at major cruise companies are taking recent developments in stride.

“We don’t expect to see any major changes [to Venice routings] in the near term, but this is government and the government can do anything they want to do,” Frank Del Rio, the president and CEO of Norwegian Cruise Line Holdings, told Wall Street analysts last week during a conference call to discuss second quarter earnings. The company is the parent of Norwegian Cruise Line, Oceania Cruises and Regent Seven Seas Cruises.

Del Rio said that, even if changes to routings are ordered by the Italian government, it shouldn’t have a huge impact on the company and cruisers.

“There are several alternative berths in and around Venice that, should it come down to the bigger ships not being able to embark and disembark guests in the same place that they do today, are alternatives that can work for the industry,” Del Rio said.