Want to know exactly what is wrong with your plane, what part is broken, why your flight is delayed, and where your new plane is coming from? If you want this level of detail when facing a delay, then you will love the new level of detail available for some flights in the United app…

Often, the most powerful thing to have at your disposal during an airline delay is knowledge and information…well, that and a power plug. Frequently, the frustrations that mount during delays aren’t because of the delay itself, but instead, tempers spike when information about the delay becomes sparse, incomplete, or incorrect. This is doubly true when you have little kids to think about in addition to yourself. While passengers obviously can’t control the weather, crew scheduling issues, or broken planes, they can make informed decisions when working with complete and up-to-date information about the delay.

With the advent of cell phones, WiFi, airline apps, and flight tracking websites, there is more information than ever available to passengers during a delay. While information availability has been on the increase for years, one airline just took things up a notch in terms of delay transparency.

Very recently, I started to notice some additional details about delays available in the United app. For example, on one delayed flight this week from Houston to LaGuardia, the United app shared that the delay was due to a problem with the plane’s fuel panel and that they had found a new plane to operate the flight. 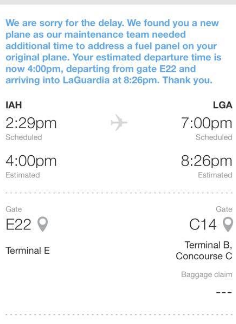 On another United flight this week from Chicago to Minneapolis, the app shared that the maintenance team needed more time to investigate a loud noise in the cabin on the original plane and that a new plane was on the way from Dallas. 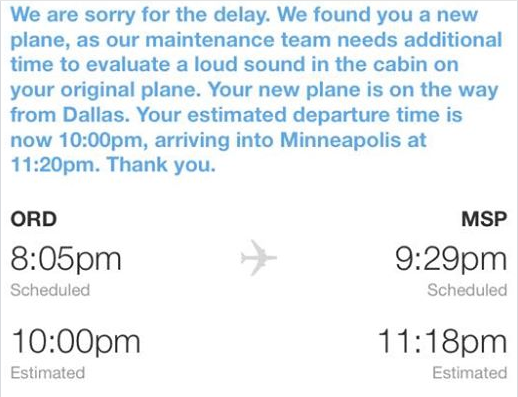 Not only is this level of detail empowering as it allows customers to make informed choices in terms of whether they should wait out the delay, try and switch to a different flight, retreat to the lounge, or bail on flying that day entirely, but I could see it being potentially useful documentation for delayed flight claims as well.

Have you noticed these sort of details during your recent delays? Would you like to know exactly why your plane is delayed or is that level of detail creeping into information overload territory?

Summer Hull , aka Mommy Points, ran the Mommy Points site for families who want to travel more for less using miles and points for seven years. She now heads up a variety of special projects at TPG when she isn't exploring the world with her own two girls.
You might like
Memorial Day weekend crowds hit airports; Delta cancels hundreds of flights
News
3h ago
Canadian government promises solutions to long airport wait times
News
6h ago
Babymoon boom! These are the top 10 spots for a US getaway before the baby comes
News
7h ago
United℠ Explorer Card

The United Explorer card offers 2 miles per dollar spent at restaurants and on hotel stays and a Global Entry or TSA Pre-Check Fee credit (up to $100). The $95 annual fee is waived for the first year.