Articles
David Slotnick is a senior aviation business reporter at TPG. He covers anything and everything to do with the business of running an airline.
Follow
June 02, 2022
•
8 min read 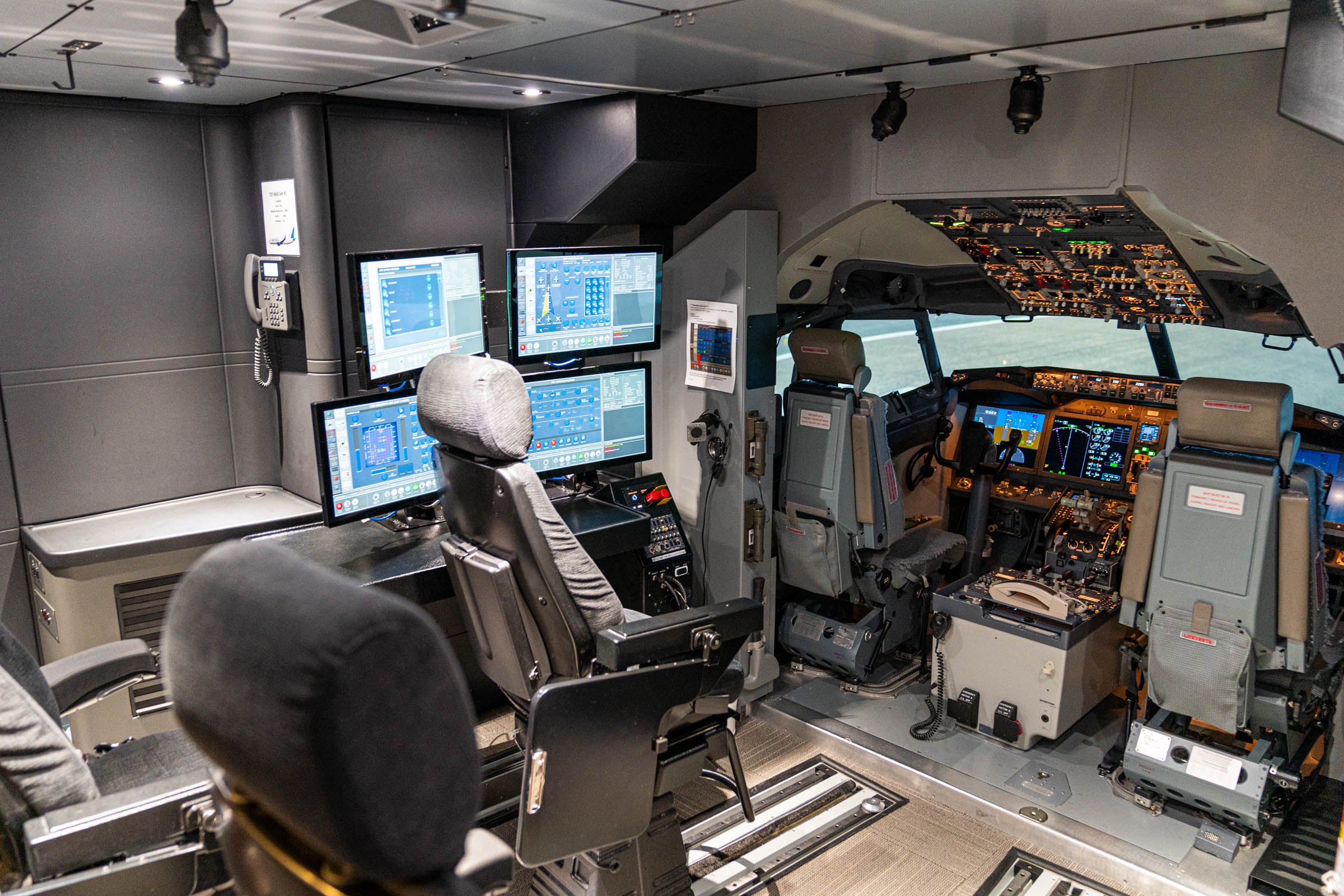 Inside United’s flight training center — and its battle against the pilot shortage
This post contains references to products from one or more of our advertisers. We may receive compensation when you click on links to those products. Terms apply to the offers listed on this page. For an explanation of our Advertising Policy, visit this page.

United Airlines is getting ready for an expanded pilot corps.

The airline announced Wednesday that it will expand its flight training center to facilitate its plans to hire 10,000 more pilots by 2030.

The airline currently has what it describes as the "world's largest" airline-owned flight training center on a 23-acre campus in Denver's Central Park neighborhood — roughly halfway between Denver International Airport (DEN) and downtown Denver. That expansion will see a new four-story building, which, in addition to classrooms, offices and conference rooms, will hold 12 new full-motion flight simulators.

Pilots at commercial airlines are required to undergo continuous training to remain certified to fly, which includes practicing emergency procedures and scenarios in the simulators. United said its 12,000 pilots undergo the training at least every nine months.

The expansion adds to what is already a massive footprint. United's campus currently features seven buildings with a total of 550,000 square feet of space, housing classrooms along with 39 full-motion simulators and 15 fixed training devices — basically stationary simulators. According to United, once construction is finished and all of the equipment is delivered, the site will have a total of 52 full-motion simulators representing every type of mainline aircraft United operates, with 28 fixed training stations.

Most airlines tend to have their training centers in one place, rather than split in several different locations around the country to align with pilots' flight schedules. About 10 years ago, United had the chance to split its operation.

Instead, the airline made a deliberate choice to consolidate all of its training in one place, said Captain Marc Champion, the managing director of the flight training center.

The airline doubled down on that strategy following its merger with Continental Airlines in 2010. United expanded the Flight Training Center in order to absorb Continental's training capacity and equipment, which at the time were based in Houston, where Continental was headquartered —and which remains a United hub city.

At the time, the airline decided that rather than splitting the operations, it would concentrate everything in Denver.

"We relocated our flight training at United Airlines to this area in 1942," Champion said. "And we've expanded upon it since then."

United also expects the expansion to help it keep its operation running smoothly, leaving enough capacity and slack for pilots to be able to always stay current, and avoid the training logjams that tend to plague the industry.

Still, the airline occasionally has some extra capacity in its training schedule, which it typically puts to use by contracting out to other airlines which have pilots in need of sim time.

"From time to time, we have some available simulators," Champion said. "In fact, we're using some right now, primarily for some freight carriers."

Even so, Champion stressed that the airline expects that to be an anomaly as it prioritizes its own pilots in the coming years.

"We've got a lot of growth planned over the next five-plus years, and we anticipate that we're not really gonna have much surplus time to be able to make available to other carriers out there," he said. "We anticipate using most everything available to us."

An on the ground tour

The campus itself feels like a college or university, with school-like buildings, each filled with classrooms and "lab" space, which in this case means simulators.

In essence, it really is a university campus. Pilots attend to complete recurrent training as required; new hires are introduced to United's equipment and procedures; new captains undergo additional training before they sit in the left seat.

The simulators themselves are massive pods, sitting on hydraulic legs and occupying massive hanger-sized rooms.

The rooms are scattered throughout each building, and each simulator has an adjacent briefing room to plan sessions and debrief afterwards.

Like on a college campus, there's a library — in this case, attached to a small museum with United memorabilia from over the years — as well as small shops with coffee, snacks and other drinks.

There's even a version of a college bookstore — the United Airlines Mainliner Club — featuring a wide range of airline-branded keychains, clothing, ID holders, home goods and other souvenirs and products.

The simulators, which can cost upwards of $15 million, are massive in person. Inside, there are two cockpit seats — one each for a captain and a first officer — as well as a seat for a flight instructor, who has a computer array to program scenarios. Wrap-around screens in the cockpit "windows" feature hyper-realistic graphics.

There are a few observer seats as well, which can be used for anyone from students or instructors, to pilots waiting for their turn. Entering and exiting the simulator is a bit of a process, so it's ideal to get at least a few rotations in at a time.

As part of a demonstration following a ground-breaking on the expansion, reporters had a chance to take a spin through the simulator with Capt. Ashley Ogden, a pilot and flight instructor at the airline.

Ogden set myself and another reporter up for a take-off and a landing each in a 737 MAX 8 simulator.

I've taken a flight lesson in a small single-engine propeller plane, and I've played around with various flight simulator games — never seriously. So it was a fairly new experience for me.

My co-pilot went first, and despite weaving around a bit on the runway, managed to take off successfully thanks to Ogden's coaching. He was able to land too — he had a fairly straight approach, and made it onto the ground nicely ... before veering off the runway and crashing.

When I went, I had the benefit of having watched him go first. My takeoff was fairly impressive for a first-timer, if I do say so myself. Obviously, I have Ogden to thank for this — especially since she set the airplane to everything it needed to be at, leaving me to simply manage the thrust and steering.

My landing... well, let's just refer to the old saying that "any landing you can walk away from is a good one." My approach was terrible, I was never able to center myself properly, but somehow — again, a credit to Ogden — I made it onto the runway and was able to come to a stop without leaving the runway, although again, I was definitely not centered.

Leaving the simulator was disorienting, and my equilibrium felt off for almost an hour. I'd expect that the high altitude of Denver didn't help.

The challenge of hiring enough pilots

United's Wednesday announcement about expanding the training center comes following several similar initiatives by United aimed at hiring more pilots, an increasing challenge given the well-documented ongoing pilot shortage which was hastened by early retirements at the start of the COVID-19 pandemic.

United recently purchased and began to operate its own flight academy, taking prospective pilots with potentially no flying experience and training them before offering a pipeline to a job at one of United's regional airlines, followed by guaranteed placement with the mainline carrier. The airline has said it plans to hire and train 5,000 pilots, or half of its overall goal, through that program. United said it expects to hire 2,000 pilots in 2022.

Nevertheless, recruiting and training is an industry-wide problem.

Earlier on Wednesday, Delta CEO Ed Bastian, speaking at a Bernstein financial conference, said that the airline has a nearly 12-month training backlog.

"We're not having any problems getting applicants," Bastian said. "It's getting them through this training cycle."