Ukrainian fleets: Where are the aircraft now? 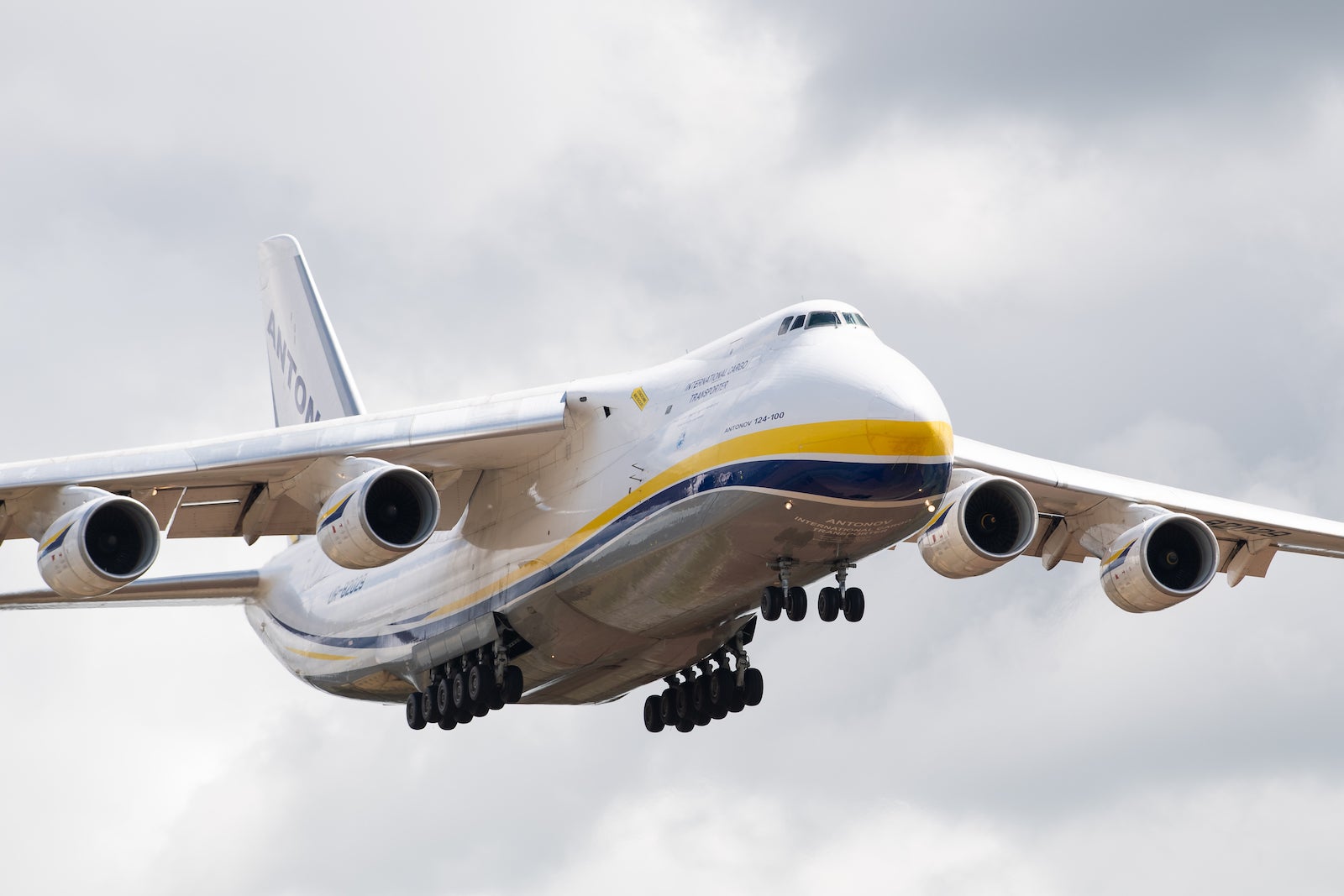 When Ukraine was attacked on Feb. 24, 2022, one of the first targets of Russian troops was the Antonov airfield in Hostomel, just a few miles northwest of Kyiv.

After some brutal combat, this airport — home to the eponymous aircraft manufacturer and cargo airline — would fall to the Russians and remain under occupation for several weeks.

When Ukrainian forces later recovered control of the area, it became clear that, in addition to the horrific human cost, the fighting and occupation had brought wholesale destruction to this area, including the irremissible loss of the one and only Antonov An-225.

The mighty Mriya, the heaviest and largest transport aircraft in the world, was no more.

Preparing to evacuate planes from Ukraine

Quoting sources at Antonov Airlines, the Ukrainian news agency Interfax-Ukraine reported that Antonov Airlines had plans to evacuate the Mriya and a handful of other aircraft to Leipzig, Germany, which was already a second home for the carrier.

Unfortunately, the frantic efforts to ready the Mriya, as well as an An-26 and an An-74T, were tragically in vain. The aircrafts' planned departure the morning of Feb. 24 was cut short by a Russian helicopter-born assault, the opening stages of what would be known as the battle of Hostomel.

Antonov’s remaining two An-124s were reportedly undergoing heavy maintenance at Hostomel and nearby Sviatoshyn at the time of the attacks. Some reports point to at least one of them having been damaged, but this was not be confirmed by Antonov Airlines representatives.

However, the bulk of Antonov Airlines’ fleet — five An-124s to be exact — managed to fly to safety in the nick of time.

Now based abroad, these supersized freighters remain active and have been joined in this forced exile by a sizable portion of the Ukrainian commercial aircraft fleet.

In fact, by the time the first missiles struck, Ukraine’s airlines had already been on a war footing for quite some time.

The creeping military buildup on the Russian side of the border in the weeks preceding the invasion, coupled with increasingly alarming warnings by the U.S., led to a stream of cancellations — a trickle at first, then a stampede. With the fate of Malaysia Airlines Flight 17 fresh in everyone's memory, airlines weren't going to take any chances.

Soon Ukraine’s home carriers had no other option but to send their aircraft abroad at the behest of insurers and lessors.

Related: The invasion of Ukraine: How pilots deal with sudden airspace closures

How the war has impacted Ukraine's aviation industry

The war has dealt the heaviest of blows to a country that in recent years had seen its airline industry bloom and was readying for further growth on the back of the Open Skies agreement between Ukraine and the EU.

This landmark deal, signed in late 2021 and ratified last February just days before the invasion, had prompted carriers like Wizz Air and Ryanair to scale up their investment in the country with the opening of new bases and routes.

The carriers joined several young Ukrainian airline startups, such as SkyUp and Bees Airline, as well as a projected government-sponsored carrier, Ukrainian National Airlines, in challenging the preeminence of Ukraine International Airlines, the market’s most prominent incumbent.

But with Ukraine now amid a war with Russia, information about the whereabouts of the expanding commercial fleet is limited. Understandably, the airlines are reluctant to share many details about the locations of aircraft.

However, there’s a wealth of publicly available sources, from industry databases and flight tracking apps to planespotters’ comments on social media, that provide a glimpse of the current status of the Ukrainian airliner fleet.

Where Ukraine's planes that got out currently reside

Ukraine International Airlines managed to send at least 13 of its 27 aircraft abroad. As of the end of April, nine of them (all of which were B737s and Embraers) were located at Castellón Airport (CDT) in Spain. At the time of writing, two other B737s were at Belgrade Nikola Tesla Airport (BEG) and another was at Tarbes Lourdes Pyrénées Airport (LDE) in southern France.

At least one Boeing 737-900ER was confirmed to have been wet-leased to airBaltic.

SkyUp, a private low-cost carrier that since its launch in 2018 grew to become the country’s second-largest airline, managed to send abroad all but one of its fleet of 15 Boeing 737s.

Only one of SkyUp’s aircraft got stranded at Kyiv’s Boryspil International Airport (KBP). The remaining 14 were already out of the country or able to depart shortly before the closure of the airspace to civilian traffic.

“Altogether, we expect to utilize up to 50% of the fleet by the end of May,” a representative of the airline told TPG.

While reluctant to confirm the fleet’s current geographical deployment, the representative added that, as of early May, one aircraft is involved in the transportation of humanitarian cargo, another is operating for Join UP! (a tour operator that shares owners with the airline and has started flights out of Lithuania, Litva and Estonia) and five others are being wet-leased.

Currently, the airline is focusing its efforts on flying refugees from airports near the Ukrainian borders to farther points in Europe and Israel. In March alone, SkyUp flew nearly 3,000 refugees from Chisinau, Moldova, to Tel Aviv on 21 flights.

A total of 201 tons of humanitarian aid were also carried in the opposite direction.

Meanwhile, Bees Airline, a startup carrier set up by some of SkyUp’s former managers, succeeded in getting its four B737-800s out of the country and has sent them to Montpellier, France, at the request of the lessors.

The airline confirmed it is now in conversations with the leasing company to reactivate at least one of the aircraft in order to fly Ukrainian citizens currently in Poland to other countries.

Which planes remain in Ukraine?

Not all airlines managed to evacuate their fleets on time, though.

Among the carriers affected is Wizz Air, which had just announced a doubling of its Ukraine capacity right before the war began. It had planned on basing five A321s aircraft in Kyiv and two in Lviv in western Ukraine. The closure of the country’s airports and airspace left four of Wizz Air’s aircraft stranded in Kyiv and Lviv.

A Wizz Air representative confirmed that aircraft were still in Ukraine as of late April. “We will continue to look at ways to evacuate the aircraft as soon as possible," the representative said. "In the meantime, the aircraft are monitored by security and satellite footage and being inspected by engineers on the ground.”

Ukrainian carrier Windrose Airlines, a charter airline that had recently begun scheduling domestic operations, only has one aircraft that managed to get out of Ukraine.

After spending five weeks stranded at Lviv Danylo Halytskyi International Airport (LWO) in western Ukraine, an area that has suffered several cruise missile attacks despite being far from the front lines, a single ATR-72 managed to reach Poland — it has since relocated to Sofia, Bulgaria — in a daring escape during which the transponders were turned off. The rest of its fleet remains in the country.

Azur Air, a Turkish-owned charter airline, has eight of its 11 aircraft stranded in Ukraine. Some of these aircraft landed at Boryspil International Airport (KBP) coming back from the Caribbean on the night of the 24th, barely ahead of the first Russian strikes.

Ryanair had also been building up its presence in the Ukrainian market. As recently as last January, the carrier was said to be considering moving up to 20 aircraft to the country.

What's next for carriers previously in Ukraine?

While airlines like Ryanair have no choice but to put expansion plans in Ukraine on pause, they are not abandoning these plans.

Ryanair's CEO Michael O’Leary pledged the carrier would be “the first airline to return” as soon as circumstances permit. In this particular endeavor, it will face competition, as airBaltic's CEO Martin Gauss made a similar pledge during a recent conversation with TPG.

In the meantime, airBaltic announced on May 5 that it will open an overland truck service to carry mail between Kyiv and Riga, feeding the airline’s cargo operations.

SkyUp is also making adjustments to its operations, with plans to make nine of its aircraft (two B737-700s and seven B737-800s) available for wet-lease contracts. It is in conversations with several airlines to place part of its staff with them on a temporary basis, too.

Additionally, the carrier said in a recent statement that it was considering expanding the scope of its cargo operations and had already applied to get the permits necessary to fly supplies from places as far as China and the U.S. to Ukraine.

Related: Donate miles and money to help Miles4Migrants get Ukrainians to safety during the Russian invasion