Articles
Terry Ward is a Florida-based freelance writer who travels the world with her two young children while contributing to The Points Guy Family, in addition to many other outlets. She has lived in France and New Zealand and has a particular passion for Norway. terry-ward.com
Follow
Nov. 03, 2021
•
9 min read 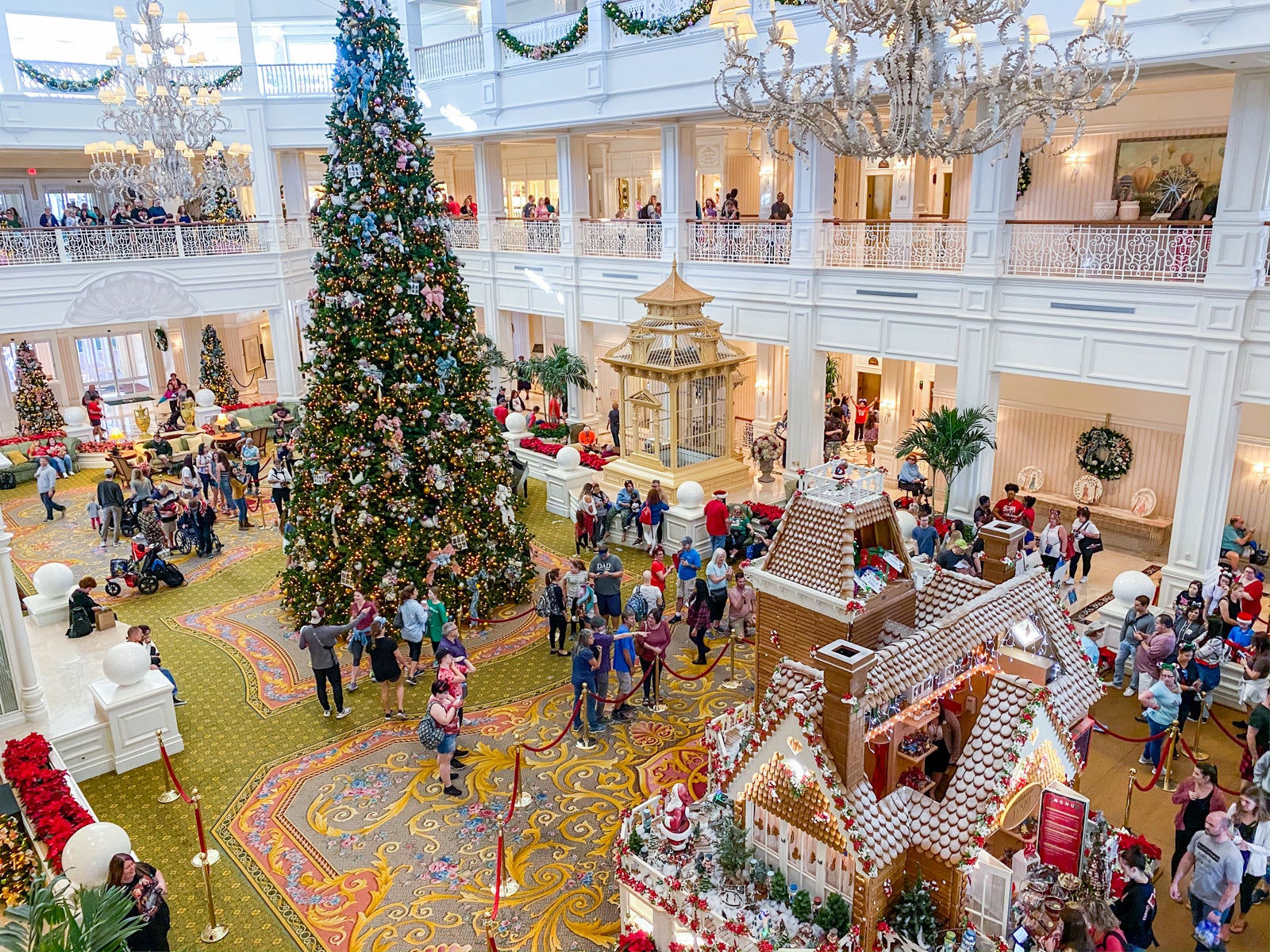 While you’re still trying to figure out what to do with all that Halloween candy, theme parks around the country are going full transformer — morphing from spooky to jolly in the blink of an eye.

In fact, parks such as Disney make the transition from Halloween to Christmas mode overnight.

It's not too early to start thinking about what you can get up to at the theme parks this holiday season (which, whether you're ready for it or not, starts now).

From Disney World to Legoland, we've rounded up the many magical ways you can celebrate the holiday season at theme parks around the United States — including some events and experiences that are brand new for this season.

Before you go, just make you know the rules at the various parks regarding face-covering requirements. That way, you won’t arrive to any unwanted holiday surprises before you even get in the gate.

As expected, all of Orlando's Walt Disney World Resort parks are going all out for the most magical season, starting with the usual barrage of festive decorations along Main Street U.S.A. in Magic Kingdom Park.

Starting Nov. 8, 2021, at Magic Kingdom, a new ticketed event will open to a limited number of guests: Disney Very Merriest After Hours. It will play out on select nights throughout the holiday season with fireworks, a themed parade, roaming characters, holiday music, treats and more. The event takes place after regular park visiting hours (starting from 9 p.m.) so you can look forward to shorter wait times at the roughly 20 attractions that will remain open.

At Disney's Hollywood Studios, Frozen fans can catch Olaf starring in "For the First Time in Forever: A Frozen Sing-Along Celebration," and Santa Claus will star in the holiday-themed motorcade rolling down Hollywood Boulevard.

At Disney's Animal Kingdom, characters are taking to the water to sail down Discovery River to festive holiday tunes.

And from Nov. 26 to Dec. 30, the Epcot International Festival of the Holidays is putting on a Cookie Stroll, showcasing seasonal flavors from around the world at Holiday Kitchens and cooking up other seasonal fun.

Don't miss Disney Springs, either — it's decking all its indoor and outdoor halls, transforming the sprawling free-entry complex into a winter wonderland complete with sporadic snowfalls at surprise locations.

You can count on all the iconic Disney resort hotels to go all out with the decor per usual, too, in case you're looking for the picture-perfect tree or another festive backdrop to stage your family holiday photo. (Pro tip: Disney's Grand Floridian never disappoints.)

With a full three extra nights of holiday celebrations on the schedule this year, Disneyland Resort in California is going all-in on holiday spirit from Nov. 12, 2021, through Jan. 9, 2022.

At Disneyland Park, the biggest holiday calling cards are the ‘A Christmas Fantasy’ Parade and ‘Believe…In Holiday Magic’ fireworks spectacular, along with the 20th installation of the Haunted Mansion Holiday (straight from Tim Burton’s The Nightmare Before Christmas)and the It's a Small World Holiday attractions.

Sleeping Beauty's Winter Castle is decking its halls, and there will be a 60-foot tree towering over Main Street U.S.A., too.

And entertainment making a much-anticipated comeback this year at the park includes “A Christmas Fantasy” parade where beloved Disney characters join Santa Claus for a merry musical celebration down Main Street, U.S.A.

At Disney California Adventure Park, look for eight food marketplaces and the Disney ¡Viva Navidad! street party. They'll even be celebrating Three Kings Day at the park from Jan. 3 through Jan. 9, 2022.

SeaWorld Orlando's Christmas Celebration is set for Nov. 12, 2021, through Jan. 2, 2022, with more than 3 million twinkling lights transforming the park for the holidays.

The Sounds of the Season Concert Series is a new addition to the park's seasonal offerings this year, with live concerts and theatrical performances taking over the Nautilus Stage on select nights.

And among the many annual holiday events making a return to SeaWorld this season are the Sesame Street Christmas Parade, the ice skating spectacular Winter Wonderland on Ice, Rudolph's Movie Experience and a public ice skating rink set up at the Bayside Stadium, alongside the park's central lagoon.

From Nov. 28 through Dec. 6, 2021, the park is putting on a Hanukkah Celebration with the traditional lighting of the menorah in Sesame Street Land taking place throughout Hannukah.

African heritage and the nightly lighting of the kinara takes place for Kwanzaa, between Dec. 26 and Jan. 1, 2021, in Sesame Street Land.

And be sure to stop by the Christmas Market along the Bayside Pathway to sample treats like butterscotch hot chocolate and mistletoe margaritas.

Worth the detour from Orlando's theme park corridor, Tampa's major theme park Busch Gardens puts on the city's biggest holiday event every year when it rolls out Christmas Town.

It's an all-out holiday extravaganza brought to life with millions of lights, the park's annual ice skating production called Christmas on Ice, the Holiday Jolly Express train ride and the Christmas Town Village stocked with holiday-inspired food and drink.

New this year, the Holiday in the Sky Fireworks Show will set the sky over the park's Festival Field alight every Saturday and on select nights starting Nov. 13, 2021. There's also a new Storytime with Mrs. Claus experience happening this year and an elf-guided tour through Santa's workshop at the park's brand new Santa's North Pole Experience.

If you happen to be in Tampa before the official Christmas Town dates, take note of a special preview of Christmas Town taking place on Nov. 6 and 7, with holiday shows and character meet and greets.

Universal Orlando goes even more out for the holidays than it does for Halloween — which is saying something. This year, the fun runs from Nov. 13, 2021, through Jan. 2, 2022.

Universal's Holiday Parade featuring Macy's is decked out with oversized balloons and character appearances from the Minions, Shrek and Madagascar.

Head over to Universal's Islands of Adventure for Grinchmas at Seuss Landing, starring all of your favorite characters from Whoville.

When it comes to The Wizarding World of Harry Potter, shows and decorations take over both Diagon Alley at Universal Studios Florida and Hogsmeade at Universal's Islands of Adventure (where hopefully the temperatures will have cooled off enough from Florida's summer months to properly savor the hot Butterbeer being served up for the season).

And Mannheim Steamroller fans should mark their calendars for Dec. 4, 5, 11 and 12, when the best-selling holiday artist of all time takes to the Music Plaza Stage at Universal Studios Florida.

Head to Universal Studios Hollywood to experience The Magic of Christmas at Hogwarts Castle, a lights and music extravaganza, and conjure the Harry Potter magic at Hogsmeade at The Wizarding World of Harry Potter.

There are also Who-tacular festivities with the Grinch and a Holiday Frog Choir complete with the choir of Hogwarts students and the accompanying sounds of their giant frogs.

Hallmark Channel presents the holiday fun in Winter Haven, Florida, all included with regular admission at Legoland Florida Resort over select dates in November and December.

At the heart of it all in Lego City is a 30-foot-tall tree made from (you guessed it) Legos, those small bricks that require some actual holiday magic when you try to construct scenes with your kids. The Lego tree dazzles with lights during nighttime celebrations. The park stays open till 7 p.m. most nights and until 8 p.m. Dec. 26 to 31, when there are nightly fireworks displays, too.

Bring the kids to the Holiday Village Postal Service, where they can handwrite letters to LEGO Santa as part of an interactive experience that lets you see your letter being sent off to Santa on a digital screen.

A Main Street Christmas at Six Flags Great Adventure brings traditional cheer at the park along Main Street, and holiday shows this year include Frost and a magic show by master illusionist Doc Swan. A giant inflatable gingerbread man leads the way to Gingerbread Junction, where there are fire pits for roasting s'mores. You can also visit Santa's Workshop at the North Pole attraction.

Festive Fireside is a new section at the park for this year's holiday event, with a brand new sassy character as your host: Chris P. Sizzle. Weather conditions pending, the park's new triple record-breaking Jersey Devil Coaster will be open to riders looking for a little more of an adrenalin rush than twinkling holiday lights can deliver.