Articles
Nicky Kelvin is the director of content and face of TPG UK, and is also an award-winning photographer. Before joining TPG UK, he was a record label lawyer and avid traveler sharing points wisdom as the "Miles Mogul."
Follow
Dec. 06, 2019
•
6 min read 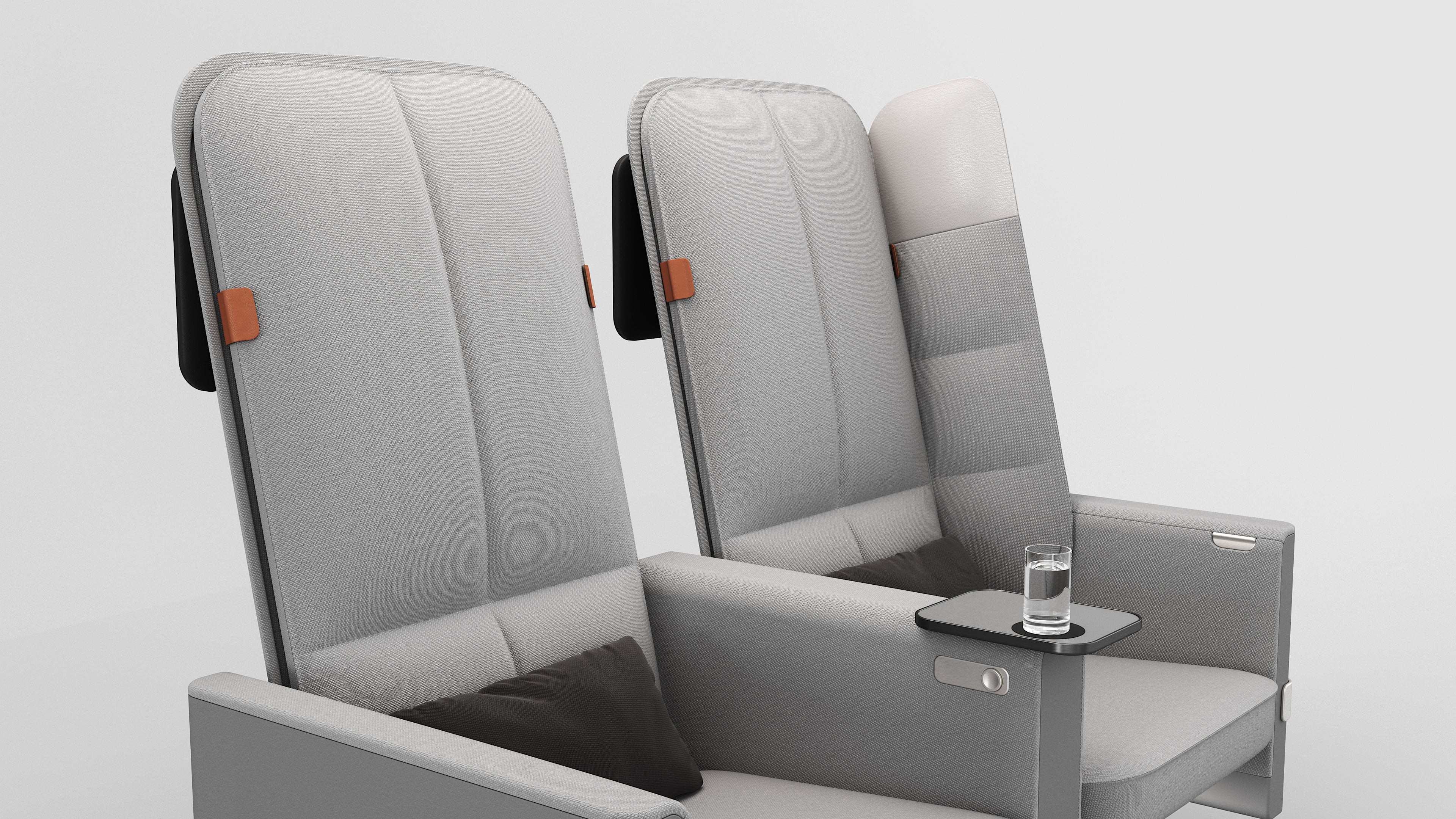 Thursday night, a London crowd got a glimpse at what the future of premium economy seating may look like. Universal Movement, a spin off of the London-based creative firm New Territory, unveiled its newest "Interspace" seat concept, and I got to experience the seat first hand.

The most noticeable new element of the Interspace seat is the flip-able wings from both sides of the seat. Luke Miles, founder and chief creative officer of New Territory, said adjustable headrests are redundant, so they shouldn't be utilized on an aircraft.

"You don't have these on your furniture at home", Miles said. Instead, the Interspace seat features padded wings that fold out from behind the seat back.

The wings flip out from either side of the seat and can be deployed by one passenger at a time, or by two passengers seated next to each other. The idea is that a passenger can then rotate their body and rest their back on a large cushioned surface. This extra lateral support should be much more comfortable and make for better sleeping.

Another nice feature is the ability to fold out the flaps on either side of a pair of seats to create an element of privacy. A premium economy suite, perhaps, where the wings fold out from directly behind the seat.

Recline on the seats is standard for what you might expect in a premium economy cabin. Additionally, if ordered by an airline, the company would have the choice to customize the colors and the feel of the seat.

At 5'8", I'm rarely left wanting to stretch out lengthways to get comfortable — the lack of comfort for me tends to be lateral. I can get my head comfortable when resting against the aircraft fuselage or window, and I find myself contorting to wriggle into a good position.

From my five minutes playing around in the sample seat, it's impossible to tell whether this seat would allow me to sleep properly, or indeed be comfortable sitting in it for one, five or even 12 hours. That said, it definitely seems like nothing much is lost from traditional premium economy designs, but a lot is gained. The seat immediately felt comfortable, so I would welcome this kind of innovation on board to try out on a long-haul flight.

Universal Movement also announced it'll look into adding additional features to set the seat apart from competition. For example, the inflight entertainment (IFE) system could come with facial recognition that would turn the screen off when you fall asleep, turn to talk to crew or go to the restroom. The company also said that it was exploring new ways of doing meal services. Instead of a built-in meal tray attached to the seat, the option would allow cabin crew to serve passengers a meal on a tray that would clip on to the seat in front. Hence, no tray table built into the seat in front.

The former sounds great, the latter a little more questionable logistically. For example, a passenger wouldn't have the option to work with their laptop on the tray table in front.

Universal Movement said that the technology of the seat allows airlines that choose to order the seat to easily retrofit their existing cabins with the features. If an airline wanted, it could choose to entirely retrofit a premium economy with the complete new seat. Or, potentially, it could opt to keep the existing seat in there, while also adding the new IFE elements and added fold-able seat features without the need to discard the entire existing product.

As more and more airlines are turning to premium economy to offer passengers a mid-market product between economy and business class, they've been forced with developing how to truly set the product apart. Whether that's in the form of hard product or soft product offerings, new developments in both fields will likely get a second look from potential customers.

On Thursday's unveiling, Universal Movement announced that no airlines had yet placed orders for the seat or any of its specific functions, though several airline executives were in attendance to get a glimpse of the new product.

It remains to be seen just how big of a hit — or miss — the Interspace seat concept will be or if it even makes it on board a commercial aircraft.