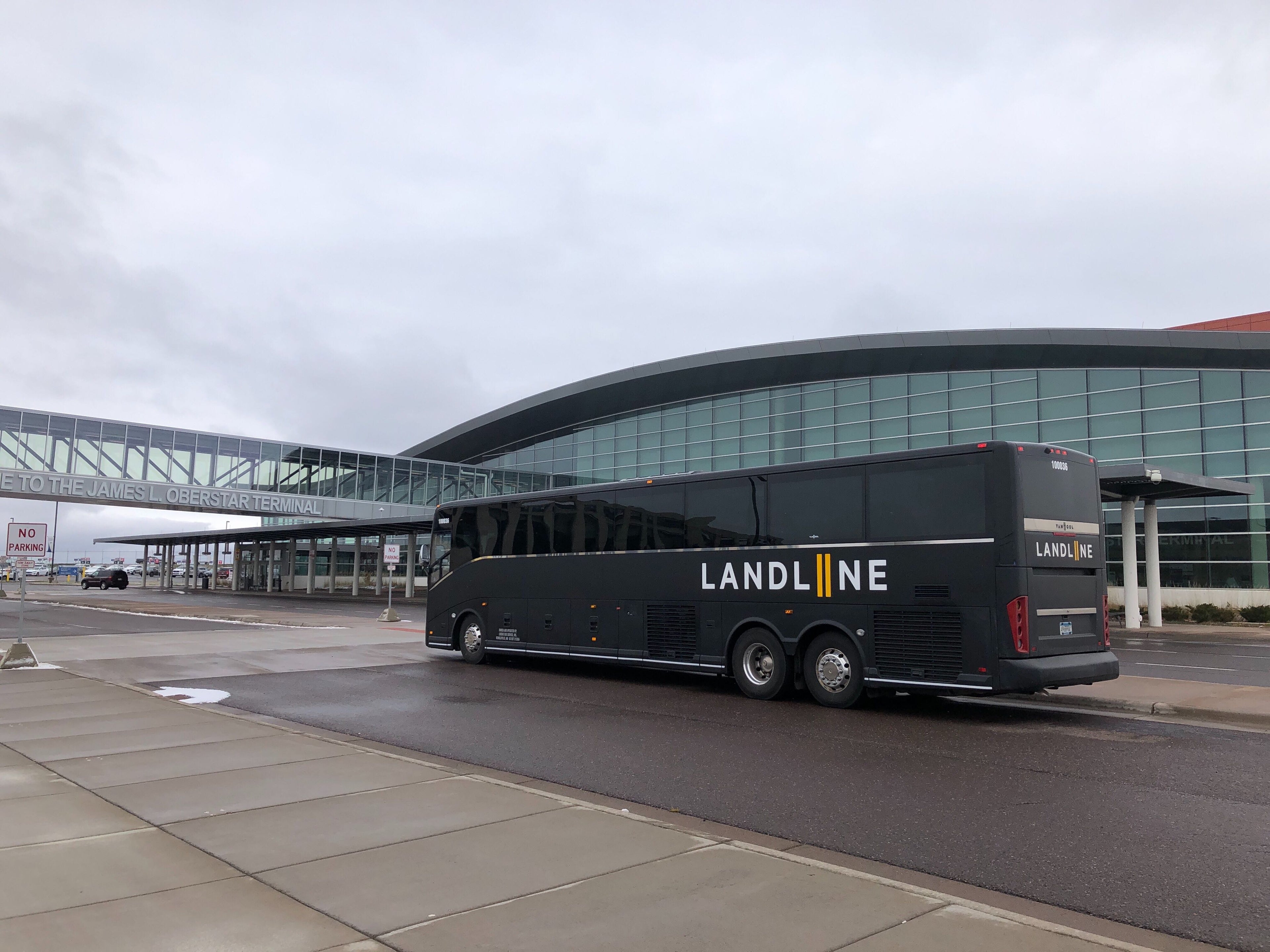 Sun Country Airlines launches new Landline bus connections
This post contains references to products from one or more of our advertisers. We may receive compensation when you click on links to those products. Terms apply to the offers listed on this page. For an explanation of our Advertising Policy, visit this page.

Sun Country Airlines launched bus connections to Duluth and Mankato in Minnesota on Monday with its new partner Landline.

The new service allows passengers to book "flights" between Sun Country's Minneapolis/St. Paul (MSP) hub and both Duluth (DLH) and Mankato (MKT) as part of itineraries connecting to the carrier's flights. Landline, which bills itself as the equivalent of a regional airline on the ground, offers four round-trips to Duluth and five round-trips to Mankato.

"We want to increase access to our customers," said Jude Bricker, CEO of Sun Country, at an event to mark the first joint bus departure at Duluth International Airport on Monday. "Carrying Minnesotans where they want to go really is our business."

Related: On Sun Country, your connection could end up being on a bus

Two Duluth residents on the first run to Minneapolis were Jeff Davis and Jeremiah Kanabe, who had won a trip to San Diego through a competition marking the launch of the new partnership. They both agreed that flying out of Duluth is expensive, and said they normally drive to Minneapolis to catch flights. The new Landline service was a welcome -- and Kanabe said often cheaper -- alternative to driving.

The idea of a bus connection between smaller communities and a larger hub airport is not new. United Airlines offers a bus service between its Newark (EWR) hub and Allentown (ABE) in Pennsylvania, and numerous U.S. carriers have offered similar products in the past.

Sun Country and Landline say their partnership is different because once a traveler checks in for the bus at either the Duluth or Mankato airports, they are considered an airline passenger and given all the associated protections. For example, if the bus is delayed and a passenger misses their connecting flight, the airline will re-accommodate them on another flight.

In addition, passengers receive boarding passes and can check luggage through to their destination at their departure airport.

"It's the start of a new era of air travel when air and ground transportation are seamlessly connected," said David Sunde, CEO and co-founder of Landline, at the Duluth airport event.

The first bus departed Duluth on-time at 10:50am local time, arriving at Terminal 2 at the Minneapolis airport shortly before its scheduled 1:50pm local time arrival. Despite some snow flurries along the route, the ride was uneventful with a cabin attendant providing passengers with free snacks and non-alcoholic drinks.

Future expansion of Sun Country and Landline's partnership will depend on how the initial routes perform. Success will be measured on its financial sustainability, said Bricker, but both the airline and bus operator hope to add new routes from the Minneapolis/St. Paul airport in the future.

Potential new Landline markets include Fargo (FAR), Hibbing (HIB), Madison (MSN), and Sioux Falls (FSD), all of which are within a 2-4.5 hour drive from Minneapolis/St. Paul, said Bricker.

Our points-obsessed staff uses a plethora of credit cards on a daily basis. If anyone on our team wouldn’t recommend it to a friend or a family member, we wouldn’t recommend it on The Points Guy either. Our opinions are our own, and have not been reviewed, approved, or endorsed by our advertising partners.
See all best card offers
Related stories
Guide
How to keep your points and miles from expiring
News
5 credit card perks to save you money on Valentine’s Day shopping
Guide
21 tips and tricks that will make your first cruise go smoothly
Guide
9 types of cards you should pack for your next trip abroad