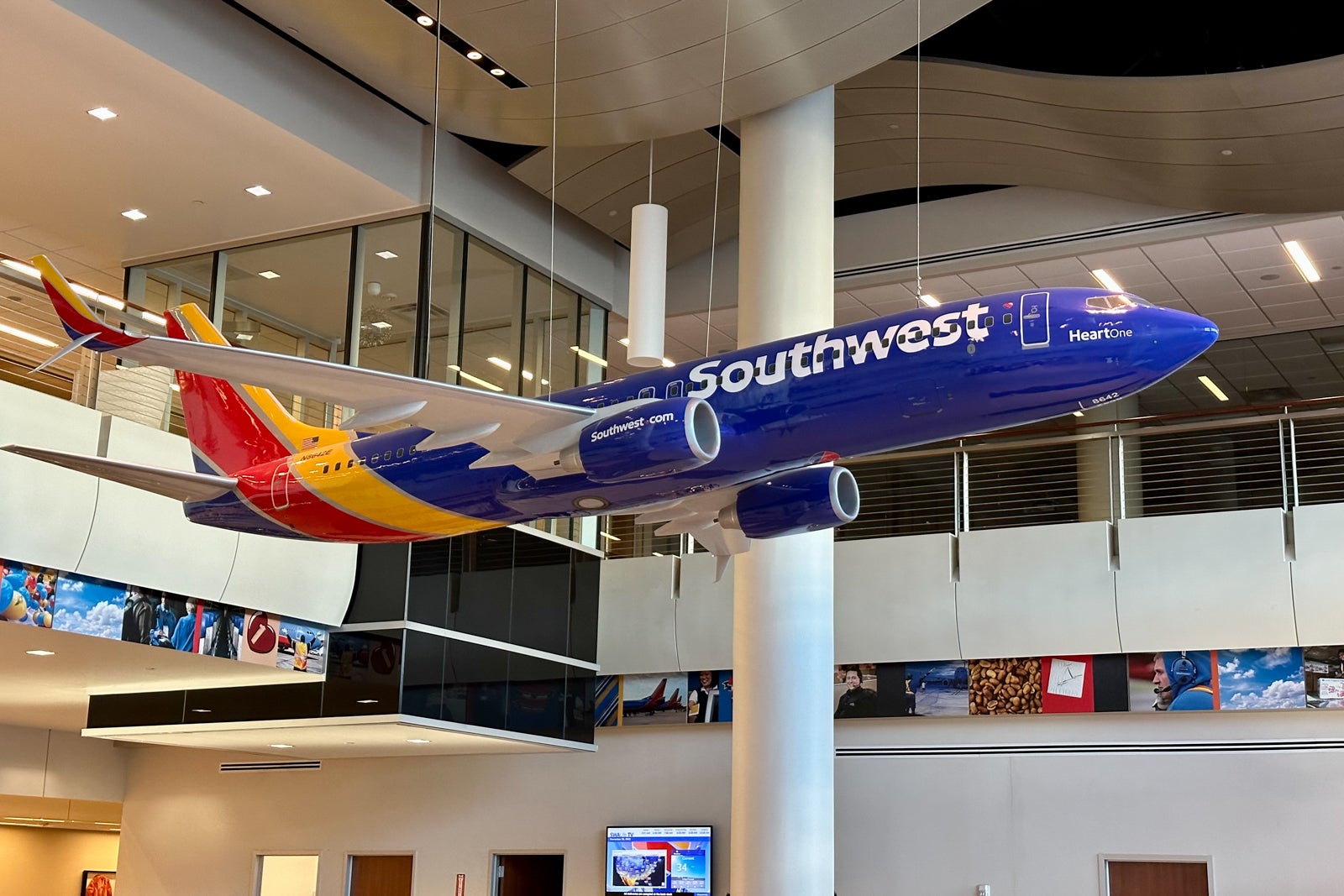 Imagine walking into work on your first day only to receive a red-carpet welcome from your new colleagues who are all lined up in droves cheering you on.

While that may sound intimidating or perhaps out of place for an airline, of all companies, this red-carpet welcome is a regular affair at Southwest's headquarters in Dallas. Each new class of employees is greeted in this same tradition, and it's become a rite of passage for all new hires.

Personally, I had no idea about this practice until I found myself in the middle of one on a recent morning. I was in Dallas during the last week of November for Southwest's media days, which are a series of meetings with executives and airline leaders to discuss the state of the airline.

While I've also shared a recap of what we learned, perhaps the most exciting part, especially for this aviation enthusiast, was getting a behind-the-scenes look inside Southwest's headquarters.

From the moment you step inside, you'll quickly realize you've entered an airline's headquarters — there's a massive Boeing 737 hanging from the ceiling of the main entrance.

The plane sports Southwest's updated livery and greets you as you find your way through the building.

Turning left brings you to the Southwest store, which is stocked with branded apparel, bags, mugs and plenty of other swag. (New joiners will want to look out for a 20% coupon that's included in the employee welcome package.)

Once you clear building security, you're free to move about. Lining the halls are inspirational messages, a treasure trove of Southwest collectibles, engine cowlings and even some spare airplane seats.

In fact, the Boeing 737 engine that's built into the wall reminded me of a similar design I recently saw at United's headquarters in Chicago.

Throughout the building, you'll find nods to Southwest's past, including pictures of founder Herb Kelleher and chairman Gary Kelly, detailed timelines of the airline's 51-year history and old marketing materials.

The airline even has a dedicated culture and archive center located on campus that has an exact replica of Kelleher's office, as well as a speaker that lets you listen to three different versions of Kelleher's laugh.

You'll find a pair of the original "hot pants" worn by Southwest flight attendants (or "hostesses," as they were referred to back when the airline started flying in 1971), too.

No matter where you turn, you're bound to discover an interesting nugget about Southwest.

An airport on the ground

When airport agents begin their careers with Southwest, they descend on the airline's Dallas headquarters for a training course. During that time, the up-and-coming agents spend time in the classroom learning about the airline's culture and familiarizing themselves with their new responsibilities.

Before they graduate, they need to put their learning into practice. While they could theoretically head to nearby Dallas Love Field (DAL), which is located just a stone's throw away, Southwest has a mock-up of a check-in lobby on-site.

Here, check-in agents learn more about how to operate the kiosks, weigh checked bags and use the airline's reservations systems.

Gate agents are also trained on campus, and there's an exact replica of a gate area on the second floor of the training building. If you close your eyes, you might imagine yourself in an airport — the seats and the boarding stanchions are exactly the same as the ones you'd find at a Southwest gate.

There's even a functioning PA system to help employees learn how to modulate their voices when welcoming the A, B and C boarding groups.

Flight attendants also spend time at Southwest's headquarters before they earn their wings.

They begin their training in the classroom with presentations detailing all the ins and outs of the Boeing 737. They'll learn about providing efficient and personalized service, handling security issues and evacuating a plane during an emergency.

After weeks behind a desk, the flight attendants practice inflight service in a specially configured Boeing 737 cabin experience trainer.

This is essentially a cross-section of an airplane with the windows removed for easy viewing from the outside. There are large TVs hanging above the plane that provide a livestream of what's happening inside for the observers to see.

The cabin itself comes from a retired Southwest jet, and it still features the original seats and overhead bins.

This trainer is the perfect way for flight attendants to get some hands-on experience without taking a fully functioning plane out of service.

In case of emergency

In addition to service delivery, flight attendants need to learn how to handle inflight emergencies, and Southwest has an area at its headquarters dedicated to just that.

This emergency preparedness center is outfitted with another cross-section of a plane, but this one can simulate many types of inflight emergencies ranging from fires to water landings to smoke in the cabin.

There's even a slide connected to this plane, which helps flight attendants practice evacuating the aircraft.

Pilots have a rigorous training schedule. They not only need to learn about how a plane operates, but they also need to regularly spend time in aircraft simulators learning how to fly in all conditions, including during emergencies.

While simulators cost millions of dollars, Southwest has invested in a whopping 26 of them for its all-Boeing 737 fleet.

These machines are exact replicas of a real 737 cockpit, and nearly every type of emergency or weather situation can be simulated during training.

Southwest operates these simulators around the clock beginning at around 6 a.m. each day and going until 3 a.m. in some cases.

With more than 4,000 daily flights, Southwest is one of the largest U.S. airlines.

While it takes tens of thousands of employees to run the operation, perhaps none are as important as the 1,000 who oversee the entire network.

These employees sit in the NOC, or network operations control center, which is essentially the central nervous system for the entire airline. Here, flights are dispatched and tracked, weather systems are monitored, technical malfunctions are addressed and more. The airline even has a minimum of two meteorologists working at any time to forecast weather across the network.

This building on Southwest's campus is so important that its walls are thick enough to withstand an F3 tornado on the Enhanced Fujita Scale. In other words, it's built to withstand winds blowing up to 206 mph.

A variety of department leaders sit in the NOC, ranging from the chief pilot to the chief flight attendant to the head of ground operations and the leader of technical operations. These key stakeholders meet three times a day — at 8:30 a.m., 3:15 p.m. and 8 p.m. — in the so-called situation room to discuss the state of the operation, with a focus on the airline's 15 largest airports.

When things are running smoothly, these meetings can take just a few minutes, but when there are weather systems across the country or air traffic control delays in key hubs, they might run overtime.

Hopefully, the next time you fly with Southwest, it'll be on a day when things are running smoothly in the NOC. If they are, there's a good chance that your flight will operate on time.