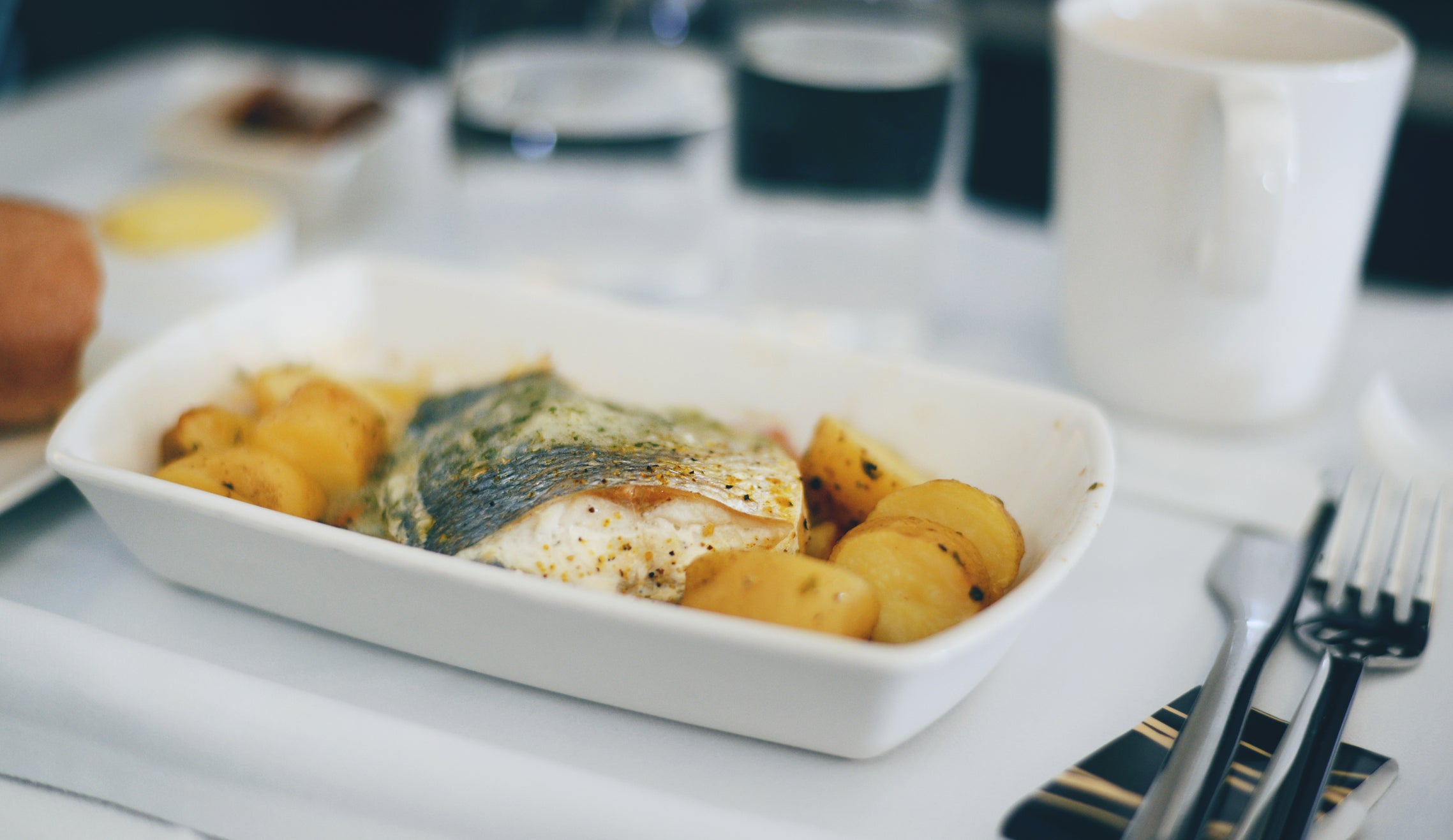 Should Airlines Stop Serving Fish Inflight for Allergic Flyers?
This post contains references to products from one or more of our advertisers. We may receive compensation when you click on links to those products. Terms apply to the offers listed on this page. For an explanation of our Advertising Policy, visit this page.

In the long list of feuds between airline staff and passengers, flyers' allergies have always been a hot-button issue.

That battle, however, has historically been waged by passengers with peanut allergies who could accidentally come in contact with remnants of the salty snack that could trigger a reaction.

Now, a new allergy seems to be moving to the forefront: fish allergies. Similar to peanut allergies, fish allergies can be triggered by remnant particles. Though reactions to peanuts are usually triggered by coming into contact with dust, fish proteins and particles that become airborne can set off a reaction when breathed in by a person with an allergy.

The situation was highlighted in January, when reality TV star Bethenny Frankel, whose severe fish allergy has been documented on her show, Bravo's The Real Housewives of New York, boarded a flight after having alerted the airline of her allergy — only to find flight attendants serving fish on board. Frankel later identified the carrier as American Airlines in subsequent tweets.

Experts say the phenomenon is a real one. In fact, an 11-year-old boy in Brooklyn, NY, died earlier this year when he went into anaphylactic shock.

"Cooking a food can release particles/proteins into the air which could trigger an allergic reaction in a highly sensitized individual to experience an anaphylactic reaction, even without ingesting the food," Dr Julie McNairn, an allergy doctor with American Academy of Allergy, Asthma and Immunology, told TPG, noting that the majority of patients don't have allergies that sensitive. "The issue on an airplane is related to the notion that it is a closed space/ recirculated air."

Despite this fact, there is a consensus among US carriers that no airline can guarantee an allergen-free flight — whether that is for peanuts, wheat, fish or anything else — because other flyers are allowed to bring aboard their own food and beverages.

"We can’t accommodate requests to not serve certain foods or to provide nut 'buffer zones,'" American Airlines spokesperson Ross Feinstein said to TPG in an emailed statement. AA also allows passengers with nut allergies to pre-board and wipe down their seating areas. "We also don’t place restrictions on foods that customers can bring on the aircraft. Because of this, we strongly encourage those with allergies to take all necessary medical precautions before flying."

In this scenario, the appropriate medical precautions would be injecting an Epinephrine pen (EpiPen), upon the onset of a reaction. But, EpiPens would likely be limited in their ability to revive and continuously stabilize a patient from an allergic attack on an hours-long flight.

Experts say that every patient and scenario varies. McNairn agrees that every food-allergic patient should carry injectable Epinephrine. "However, the use of Epinephrine cannot guarantee recovery form an anaphylactic reaction — some patients need multiple doses of epinephrine or emergency care despite using the Epinephrine appropriately," she noted, adding the effect of "epinephrine wears off after about 20 minutes or so."

American's allergy policy is similar to that of the other legacy carriers, like United, which says it "may" inform other passengers about a customer's sever allergy, but it will not make changes to onboard meals. "If a customer has concerns about a severe food allergy, they can notify United ahead of their travel and/or notify a flight attendant onboard the aircraft," Rachael Rivas, a spokesperson for United, told TPG.

"In some cases, United may pass along a customer’s concerns to other customers seated nearby and request that they refrain from opening and eating any allergen-containing products they may have brought on board. As mentioned however, United cannot guarantee an allergen free environment onboard. We cannot make changes to onboard meals due to operational reasons. United does offer special meals which can be requested ahead on routes that offer a breakfast, lunch or dinner service."

Delta said it takes other precautions for flyers with sensitive allergies. "This includes making cabin announcements to alert other customers of known allergies, offering pre-boarding to customers with allergies so they can cleanse their immediate seating area, creating buffer zones onboard and offering a variety of special meals for customers with specific dietary needs.”

"Without knowing what sort of buffer zone could be created," McNairn said, "it is difficult to tell how effective it might be."

Airlines seemed to largely acknowledge passengers' war with peanuts, with many carriers retiring the snack after high profile incidents that endangered their customers' lives.

It remains to be seen whether a crusade against fish inflight will have a similar outcome.